Damon Gameau, best known for That Sugar Film, the documentary that made us all say, “I’m sorry, what’s in my food?”, has returned to our screens with another life-changing epic.

Having already clocked up $1 million at the Australian box office, Gameau’s latest documentary, 2040, has solidified its spot in the top 10 highest grossing Australian documentaries of all-time. The documentary tackles the climate crisis from the refreshing view of what our world could look like if we took advantage of the clean, green technologies and techniques that already exist today.

We spoke to the iconic filmmaker about activism, optimism and his vision for a brighter future.

2040 opened to a wonderful week, did you expect it to blow up as much as it did?

Gosh, you just sort of cross your fingers, especially at the moment where we really need these kinds of stories to get out there, you hope that people are going to be receptive to them. It’s been really wonderful [that] the film’s been used as it is, and not just on the surface in terms of the public response in cinemas and box-office, but more what’s going on behind the scenes around council screenings, and government screenings, and corporations screenings; it just shows the fact that people are ready for a new narrative, they want to know the solutions, they want to know how they can get involved.

You’re obviously fully aware of climate activist Greta Thunberg. Her message around climate change has been, “Act as you would in a crisis.” – why was it important to you to create a sustainability documentary that embraces a more positive note?

I think we need everyone doing whatever they can in whatever language they want [to use] to communicate. There are some people that are willing to go out there and glue themselves to the road, or strap themselves to something, and panic, and that’s absolutely valid and I agree in a lot of ways. 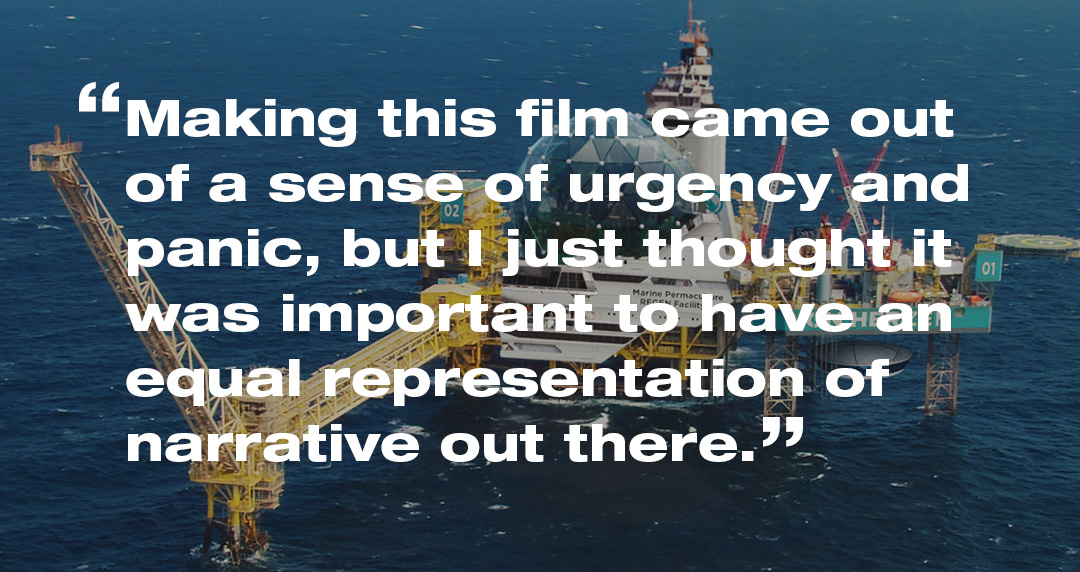 Making this film came out of a sense of urgency and panic, but I just thought it was important to have an equal representation of narrative out there. Psychology does say that if we are constantly in that state of fear and dread and anxiety, for some people it can be overwhelming and actually paralyses them taking action… so I think it’s important to use all sorts of techniques to get people engaged… we all have to unite and find a way to do it.

Speaking of being engaged, we’re seeing a lot of student protests, kids as young as 13 protesting about climate change, what do you think of students getting involved like that?

I think it’s absolutely sensational and it’s probably one of the main areas of hope that we have right now. They’re eloquent and articulate on the subject, they really understand what’s going on and there are no vested interests, they haven’t had their views politicised yet. It’s just a very raw and honest acceptance of what’s going on, and I think that’s why they’re quite incredulous at the lack of leadership or actions that’s been taken. In many ways they’re teaching us how to lead at the moment, that enthusiasm and passion is something that we should all be getting behind and using to usher through to a new era.

I’ve been thrilled with how that generation has responded to the film, really using it to kick start their own imaginations and their own dreaming about what kind of future they want… because really it is their future.

The last federal election was supposed to be “the climate election,” do you think it actually lived up to that?

Well, no. I guess there were elements of that, sure, but I think ultimately it showed that people value their security and that’s completely understandable. We really try to do that in the film, to communicate in a way that says, “You know what, these solutions – even if you don’t think climate change is real – we would want to do all of these solutions anyway because of how they improve people’s lives and their security and their sense of community.” 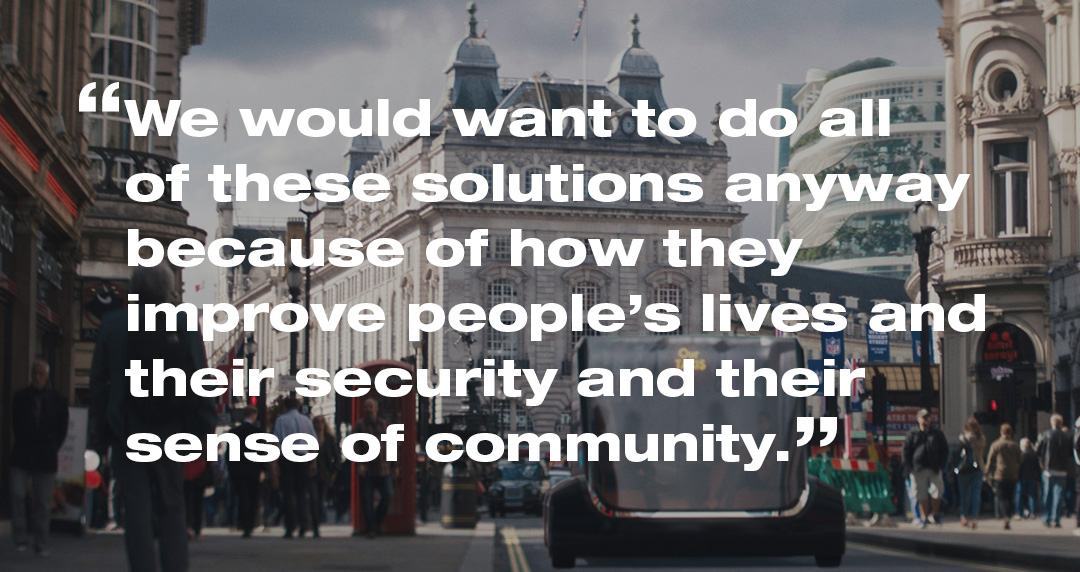 I think its really important to actually start being very considered and careful with the language we use around this stuff because… quite often people have left the communicating to scientists and they’ve done a terrific job, but some of their language is very hard to connect with. I’m still flabbergasted, some people haven’t yet made the connection even between coal and climate change - don’t understand that when they switch on the light, that’s coming from a coal-fired power station somewhere. [It’s] the same as when you talk about two-degrees-warming, people really don’t know what that means and if anything, in colder parts of the world, it can mean that your life might be better off because it’s a bit warmer - so there’s no comprehension of the ripple effect of what that means. It’s a challenge to all storytellers, and film makers and artists to actually get involved right now and start helping, communicating, disseminating this message, but also, kick-starting imagination about what kind of world we do want?

There’s so much for people to learn watching 2040, what is it you learnt when creating the documentary?

It’s been a bit of a life changer in a lot of ways. I think when I started I had quite a reductionist view of it, in the sense that I was looking for solutions purely around carbon and thinking, “How do we get carbon out of the atmosphere?”, “How do we stop putting it up there?”, the more I went on, I realised how intertwined so many things are… we can’t tinker around the edges any more, we might need to transition to something that’s going to serve us better. But it’s a systemic issue. We only measure our success in terms of finance and GDP, and that actually creates blindness to all the other things that we hold really dear to ourselves, and unless we change that, nothing’s going to change. Thankfully, all of the solutions I discovered can repair a lot of [systemic] things, at the same time as pulling carbon out of the atmosphere. It’s an opportunity to grow and change and do something very different, and live a different life, and that’s what we have in front of us. Whether we accept it or not is up to us, but that’s what’s on the table right now.

What role do you think social media plays in climate change activism? Help or a hindrance?

It’s the double-edged sword. We put out a crowdfund for this micro-grid, to bring the technology from Bangladesh to Australia, and we’ve been gobsmacked with how much support we’ve had for that, and that wouldn’t happen unless we were able to get our messages out and people were able to share it, so that’s definitely a positive. But, in my research, I’ve seen how it can be, or is being, used against us. It’s just simple algorithms; 66% of the Make America Great Again hashtags that were online in the 2016 election were bots.

So it’s very easy to give people a sense of support that isn’t there or actually create an illusion of argument for extreme views, and I think that’s really damaging us at the moment. If you go back through history, free speech was important, but if someone really came out with an outrageous claim, they would very quickly get overruled by the group consensus, and they’d be the weird one in the corner; whereas now algorithms are actually amplifying that person’s voice, so instead of them being shunned in the corner, they get all the attention. I think that’s potentially really destructive in terms of how we’re dealing with those kinds of views. We’re not just laughing at them and going, “Oh just go away,” we’re now actually giving them far too much attention.

So, why is sustainability important to you?

I’m actually going to go out on a limb here: I think we need to move on from the word “sustainability”. We’re using 90 billion metric tonnes of resources every year, and the sustainable amount is 50 billion metric tonnes, so we’re already double [and] we’re on track to using 180 billion. If we “sustain” our practices right now we’re going to fly over the cliff. We’ve gone for the word “regenerate”.

We need to start regenerating systems, need to grow again from something new, not be sustained. We’ve just gone so over a tipping point now, in terms of what we’ve done to the planet, that we need to be very careful about how we get it back. More than ever, whatever you want to call it –  whether it's regenerative or sustainable - it’s the only way we can operate right now and anyone that isn’t operating like that is doing a disservice. I think that it's changing, I’ve found I’m quite excited by how people are holding each other to account… practices are really being scrutinised in a great way, that indicates the cultural norms are changing and values are shifting about what’s acceptable, and I think that’s terrific.

Do you have a favourite product or label that’s behaving in this regenerative manner?

It’s hard to go past Patagonia. What they’re doing is quite remarkable. Even their ability to repair clothes; they say come back and bring your item of clothing for free and we’ll fix it, we don’t want you buying more. They’re just switching all their practices to regenerative agriculture at the moment, so they’re only going to grow [material for] clothes from regenerative organic methods. They’ve just changed their mission statement about how they’re going to try and save the world, it’s quite phenomenal what they’re doing and how much integrity they’ve got. In terms of corporate structure, they’re pretty much way out in front.

And here are 7 sustainable fashion brands that deserve your dollars.