Listen Up, Here’s How You Can Help Free The Aboriginal Flag

Here’s an absolutely bonkers fact that sounds so insane it couldn’t possibly be true… except it is. Are you ready for it?

The Aboriginal flag is copyrighted. That’s right, it’s not “owned” by Australia’s First Nation’s People (the very people who it represents), but by a handful of non-Indigenous companies who charge a fee every single time the flag is printed. In fact, it’s thought to be the only official flag of any country to be copyrighted.

It’s not right and it hasn’t been for a long time. But we’re not letting it slide anymore, and neither are the legends at Clothing The Gap who have launched the Free The Flag campaign. For those who aren’t familiar, Clothing The Gap is an Aboriginal owned and led social enterprise and fashion label that commits 100 percent of their profits to support health promotion activities in Aboriginal communities.

We caught up with Clothing The Gap founder, managing director and all-round legend, Laura Thompson to find what the campaign means to her and her team and how we can all do our part to finally free the flag.

What does the Aboriginal flag mean to you?

My mum was an Aboriginal Health Worker who loved her Aboriginal Flag and her flag bag. I remember her telling me how she would visit new mums and their babies after birth at their homes. Many times, they didn’t know who she was but when they saw her bag, she said it gave her entry into their space. This is an example of how the flag makes people feel safe, welcomed and connected. 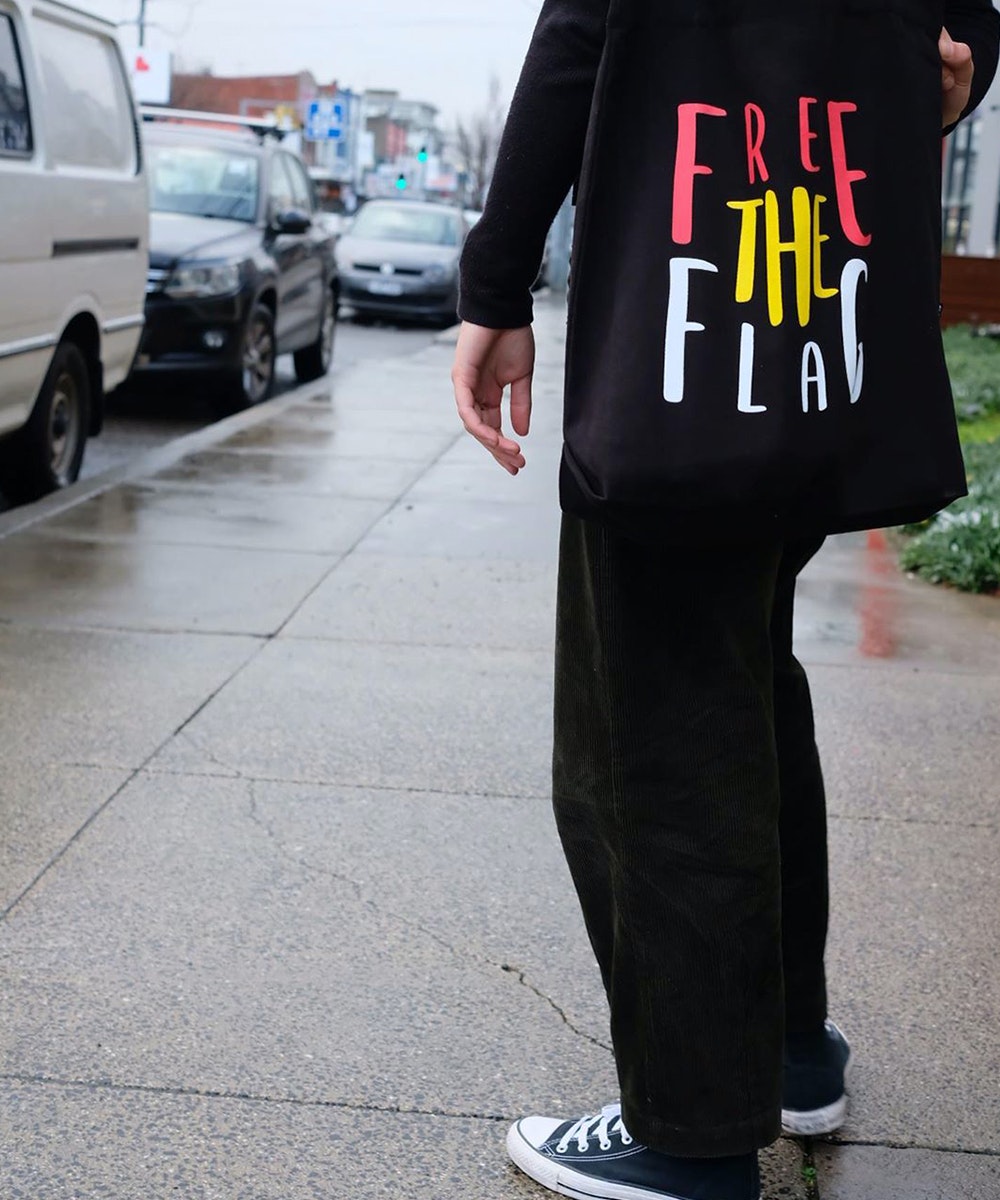 Why is it important for the flag to be free of copyright?

The Aboriginal Flag was designed by Harold Thomas, a Luritja man, in 1972. The flag was proclaimed as an official flag in 1995 and Harold was awarded copyright in 1997 by the Federal Court after Harold’s authorship was challenged.

It’s important for the flag to be free from copyright because Aboriginal people are the only race in the world that have to pledge our allegiance to a flag that is a piece of private property and owned by one man: Harold.

The community wants to celebrate the Aboriginal flag without asking for permission and the Free the Flag campaign is advocating for free celebration, essentially a public license. We want the same rights all Australians enjoy to the Australian flag—this is about flag equality and flag rights. The current licensing agreements and thus the control of the Aboriginal flag is distressing for the community and as a result people are using it less.

The Aboriginal Flag should stay as a representation of pride, resistance and celebration of culture, not be shackled and controlled. This is yet another hardship and reminder of the oppression still present in Australia today.

What triggered the Free The Flag campaign?

In June 2019, Clothing The Gap, along with other businesses, including several sporting codes, were issued a ‘cease and desist’ notice from WAM Clothing for celebrating and displaying the Aboriginal Flag on clothing. We had three days to sell our ‘illegal’ flag products. Currently, WAM Clothing holds a worldwide exclusive licensing agreement with the flag’s copyright owner, Harold, to produce the Aboriginal flag on clothing. Following on from this, we decided to start a petition and launch a public campaign to Free The Flag. We have been advocating ever since with Nova Peris (OAM, Olympian and former Senator) and Michael Connolly (Dreamtime Kullilla-Art) who are also leading the way. 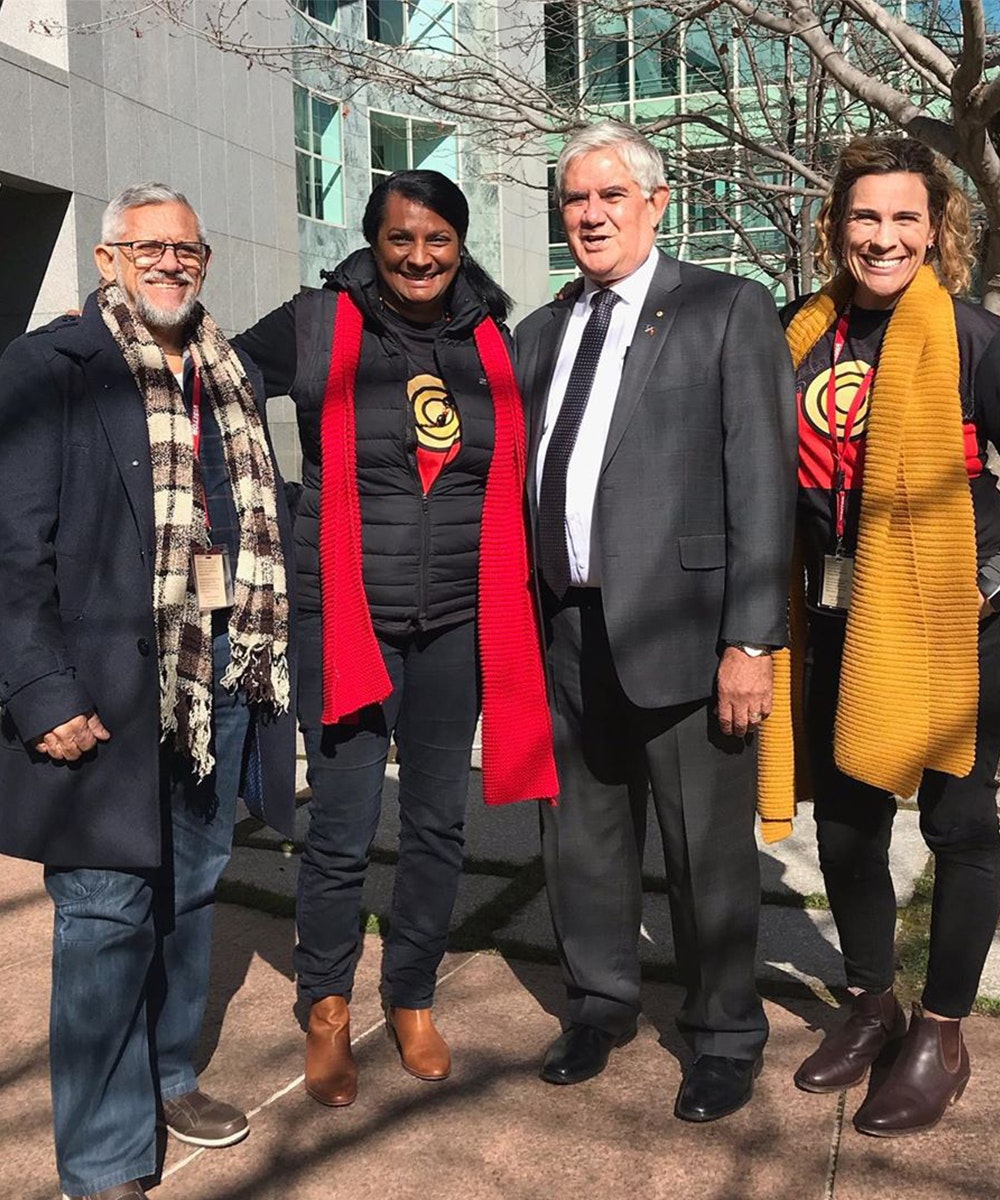 Talk me through the ethos around the #PrideNotProfit hashtag?

When we first created the Change.org ‘Pride Not Profit’ petition it had an accompanying image that was the Aboriginal Flag but the centre yellow circle (that represents the sun) was replaced with a yellow dollar sign.

In all honesty, this image still makes me nauseous as it is not how the flag should ever be. Sadly, this image represented how some people saw it and it’s incredibly upsetting to think that the Aboriginal flag has become about greed and profit. The flag is an iconic symbol that should always be about pride, not profit.

For almost 50 years, we as Aboriginal people thought the flag belonged to ‘us’. However, the three licensing agreements that control its use are a stark reminder that the Flag essentially belongs to Harold Thomas, irrespective of the fact that it was the Aboriginal people who adopted it and gave it the value that it has today. We believe that it always was and always will be ‘our’ flag.

Every AFL club joined the Free the Flag campaign during the annual Sir Doug Nicholls Round, what does that mean to you and your team?

When Collingwood Football Club committed to bringing awareness to the Free the Flag campaign last year we were so excited! We knew it would only take one club to help better inform the community of why the Aboriginal flag, an important and iconic symbol, would be missing from the ground during Indigenous round.

COVID-19 has impacted everyone dramatically and we reconnected with the other AFL clubs only four days before Indigenous round started. In hope, we asked if they too supported the campaign to free the Aboriginal Flag from copyright. We never expected other clubs to join at such late notice but, to have all clubs unite in solidarity on this issue was beyond what we ever imagined! All 18 clubs taking collective action sparked a nationwide conversation and dramatically increased the public’s awareness of the Aboriginal Flag copyright issue. 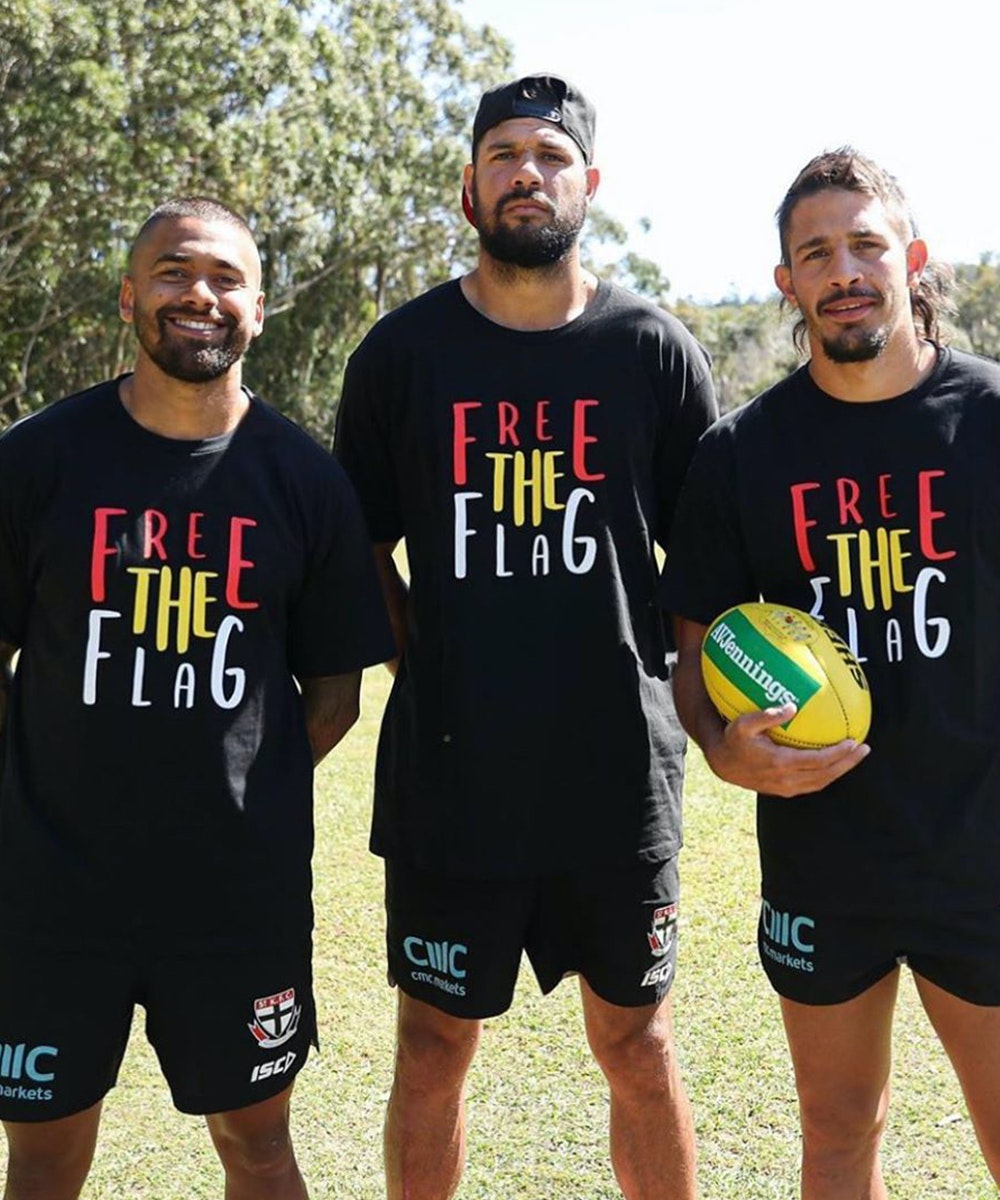 How can people get on board and help free the flag?

We invite everyone to get on board the fight to free the Aboriginal Flag from copyright! When we use our individual voice together we can make great change. This is a struggle worth fighting for—everyone deserves equal flag rights.

Here are six ways you can help:
#1 See, sign and share the #PrideNotProfit petition.
#2 Write to your local Member of Parliament. (There's a template here)
#3 Wear your values on your tee and rep some Free The Flag merchandise as a conversation starter.
#4 Raise awareness and have conversations about the Aboriginal Flag and the impact of the copyright in your circle of influence.
#5 Donate to the 'Free The Flag—Fighting Fund' which will be used to assist the Free The Flag Campaign with resources to continue the fight to free the Aboriginal Flag.
#6 Replace the flag with the Free the Flag logo to show your support.

What will it take to Free The Flag?

I am not an intellectual property guru, copyright expert or lawyer. The issue is complex, and the most brilliant minds are struggling to resolve this issue which is about private vs. public rights. I believe the government should use all available resources to find a fair and equitable resolution to ensure the Aboriginal flag remains just that—an official flag protected under the Flags Act where the copyright does not impact on everyday Australians and the Aboriginal Community.

The Aboriginal flag was born out of resistance and struggle and should continue to be a symbol of continuous growth, justice and celebration—for all.

For more information, check out Clothing The Gap here.