I was first introduced to the sweet beats of Six60 back in 2013 when a mate bought me a ticket for their gig at a small underground bar in Sydney. It was an intimate show where clusters of sweaty fans rocked back and forth to the band's breakaway hit Don't Forget Your Roots. From that day forward I, like the rest of New Zealand, was well and truly hooked by their unique sound—a mash up of reggae, rock, pop and soul. Fast forward to December 2019 and I couldn't even wrangle a ticket to their Gold Coast show because it sold out in minutes.

Such is the epic rise of New Zealand's biggest band, Six60. Formed back in 2008 by a group of rugby-playing university mates in Dunedin on Aoetearoa's South Island, in the years since I saw them play for the first time, they've continued to smash records, selling out NZ's largest stadiums and touring the world.

The next feather in their bow? A movie of course. Just like Taylor Swift, Lady Gaga and Justin Bieber, the boys are finally sharing their story on the big screen. Till The Lights Go Out hits cinemas 26 November and trust me when I say the boys don’t hold anything back. From each member's origin story to internal struggles within the group, they give fans a true insight into their lives.

I caught up with Six60 frontman Matiu Walters and bass guitarist Chris Mac for a yarn to chat about how far they've come, the inspo behind the movie and what's next for the Kiwi crooners.

Things have changed so much for you guys over the years, I'm curious to know how you measure success? What it looked like for you back in the day and what it looks like now?

Matiu: I don't know if anything is that different really. We're still just trying to do our best and write cool songs and put on cool shows. We've had more experience so I guess making decisions are a bit easier but at the core it's the same thing, just creating music that makes us feel good and represents us. 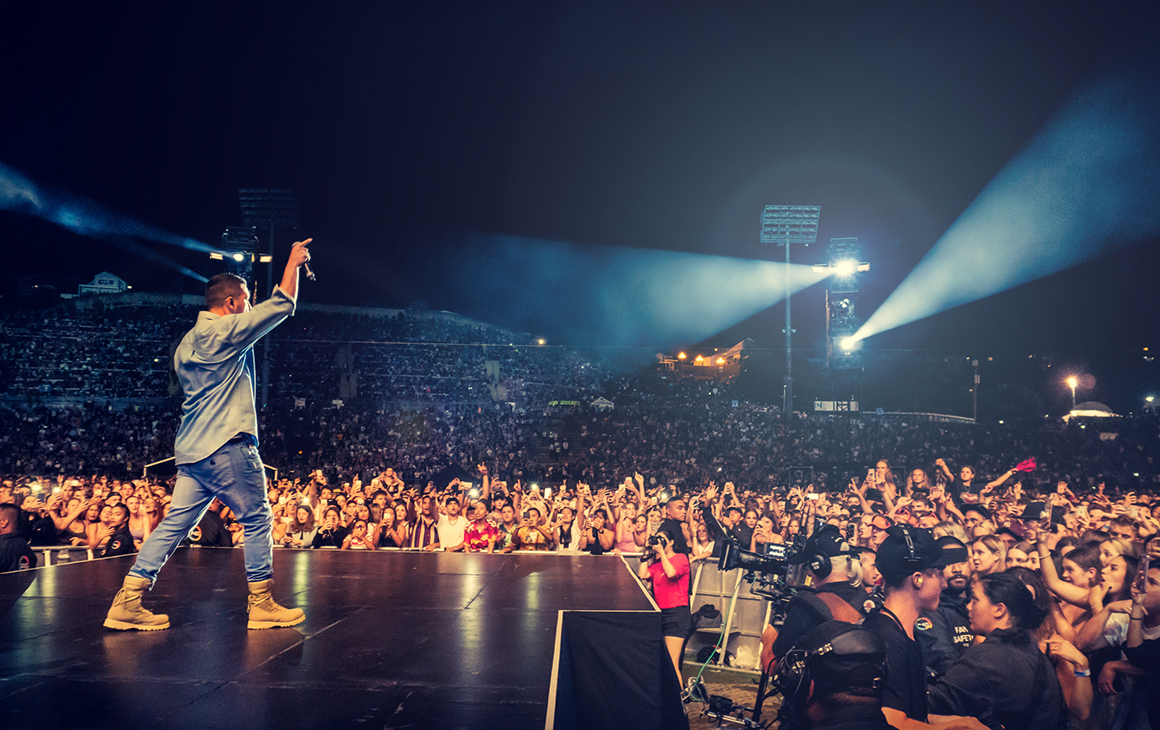 And now you're just doing that to a much larger crowd...

I saw the movie last night, it's epic. How did the project come your way?

Matiu: It's been almost two years in the making. Marlon and I actually met Julia Parnell (director) doing a different docu-series about music in New Zealand. We hit it off with her and we were about to play this really big show and she saw a cool opportunity to tell our story. For the most part, we were kind of outsiders in the industry. We didn’t come up from your traditional means. It was a little more, backyard rags to riches kind of thing. Sweat off the brow, type stuff.

Were you nervous about showing so much of yourself?

Chris: The thing is Julia is very tricky (laughs). She lulls you into a false sense of security and then you leave and think, 'what did I even say?'.
Matiu: We talked about this the other day and we were laughing—when we were asked if we wanted a movie, we didn't think about letting the truth out and how much work it is. You just hear 'do you want to have a movie about yourself?' and we're like ‘hell yea we want a movie!’. And then you do all the interviews and it's a bit of a hard slog in some places and very emotional for us because there are some things that come up in the movie that we felt and experienced together but no one really ever sat down and put it in black and white to each other's faces, so it was kind of nice to have that opportunity. Watching it back that first time I was definitely emotional at times. 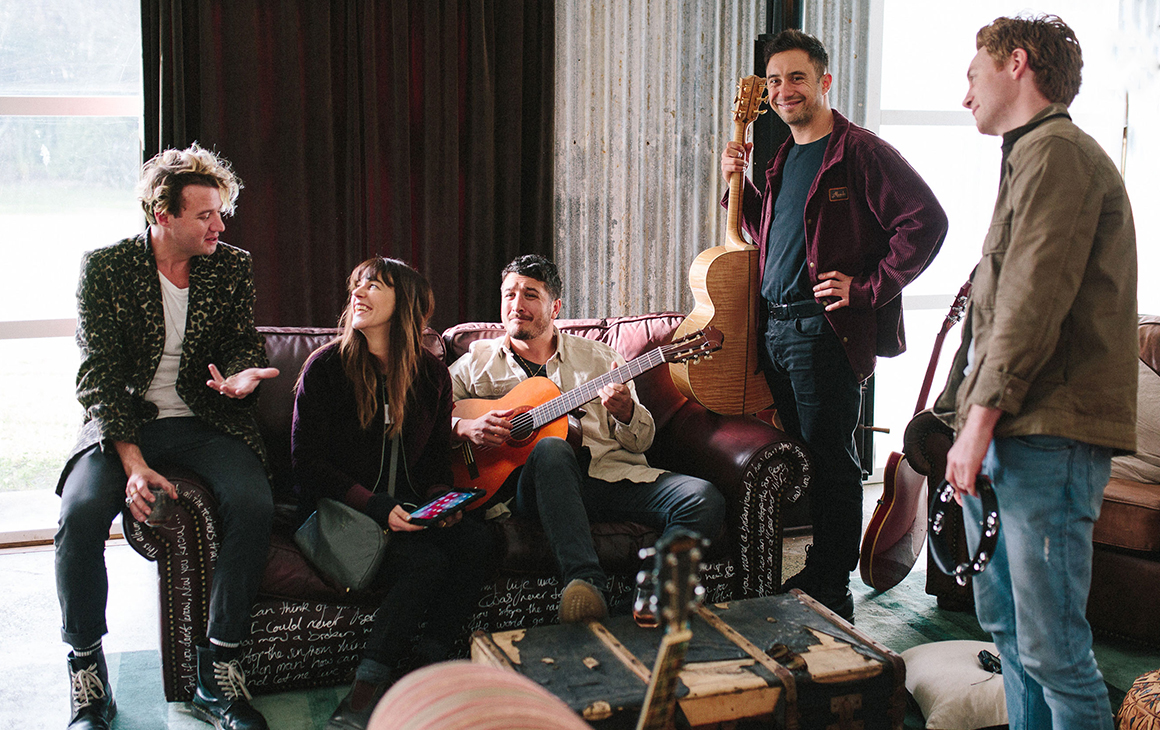 Did you guys watch it together or alone the first time?

Matiu: We watched it together for the first time and we were in Sydney actually. We were over for some promo and our manager and Julia had to conspire and spring it on us.
Chris: It was a very quiet van ride on the way to watch it. And then afterwards...
Matiu: There was tequila.

It looked quite cathartic, like at time you guys were having a revelatory moment that you didn't realise was going to happen.

Chris: There really were revelatory moments because we hadn't talked about some stuff that had happened [in the past]. When you actually verbalise something, it becomes real and is cathartic in a way. That's why therapy is so good, you feel so much better after you get it off your chest. But we just never expressed how we were feeling. It was nice to do, if not a little bit intimidating. 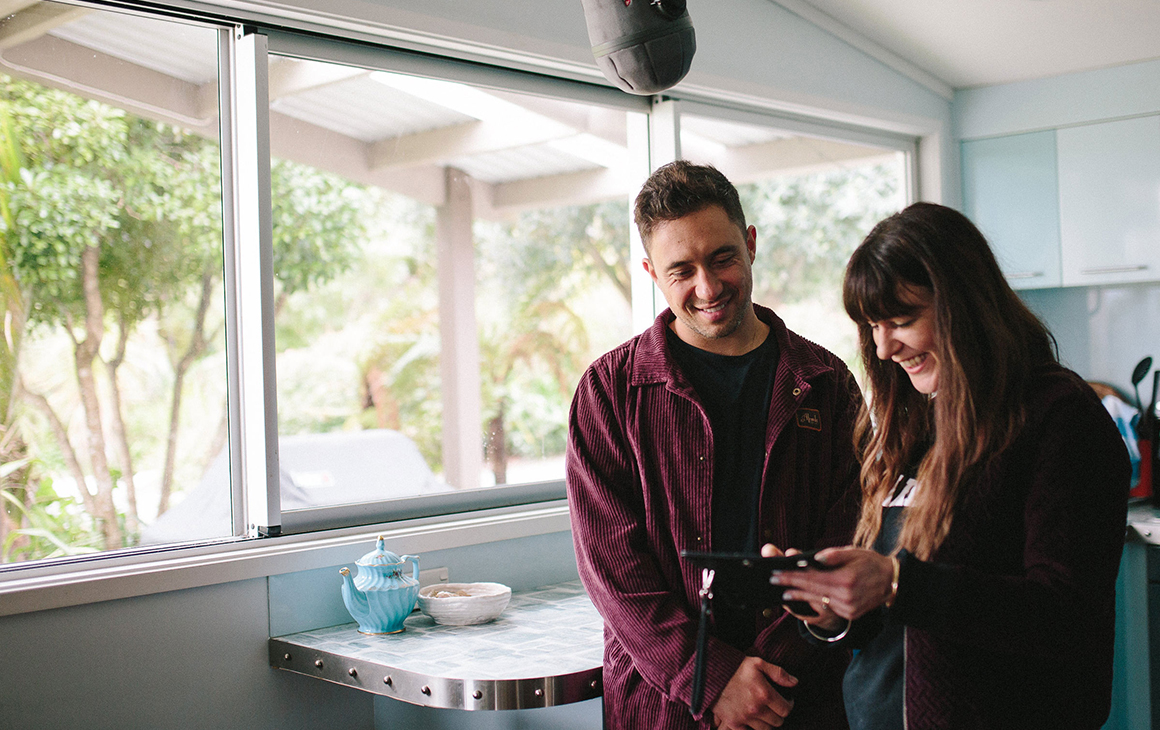 What do you reckon the fans will think?

Matiu: I've been through waves of real anxiety about letting this out but at the end of the day it's the truth and that's nothing to be ashamed of. I think it's going to help some people, I think people will see a lot of their own story in ours. We're just normal guys, who wanted something and just went for it. Sometimes I think, we were only just jamming in a backyard playing covers and the next day we're on this bloody magic carpet ride and haven't really allowed ourselves some time to just reflect on what we've done and where we're going. I also hope people feel like they see that we're real and that we love what we do and we love to represent.

COVID has made 2020 a pretty wild year, what were your plans and how much did that change?

Chris: We would have been overseas for a lot of the year. We had some really great shows lined up in Europe and we would have been in the States a fair bit writing and making music. It was a bit of kick to the guts when you started figuring out all of the really cool things we had planned and that's definitely not going to happen now but it did afford us some really great band time where there was a little less pressure and we could just hang out and be creative together and for that reason it was quite nice.

Did much songwriting happen when you were in lockdown?

Matiu: I tried but I need to have lived an experience to write about and I don't think any of us were going to write a song called Lockdown or Let Me Out. It was good relationship and family time though, a chance to just slow down.
Chris: I wanted to be super creative. I set up a little studio in the house which I don't normally have and I was ready to go. I think I did maybe three or four days of actual work. Like Matui said, there was nothing to write about, nothing inspiring and we were all just confused, the whole world was. As soon as lockdown was over there was a huge wind of creativity from all of us. 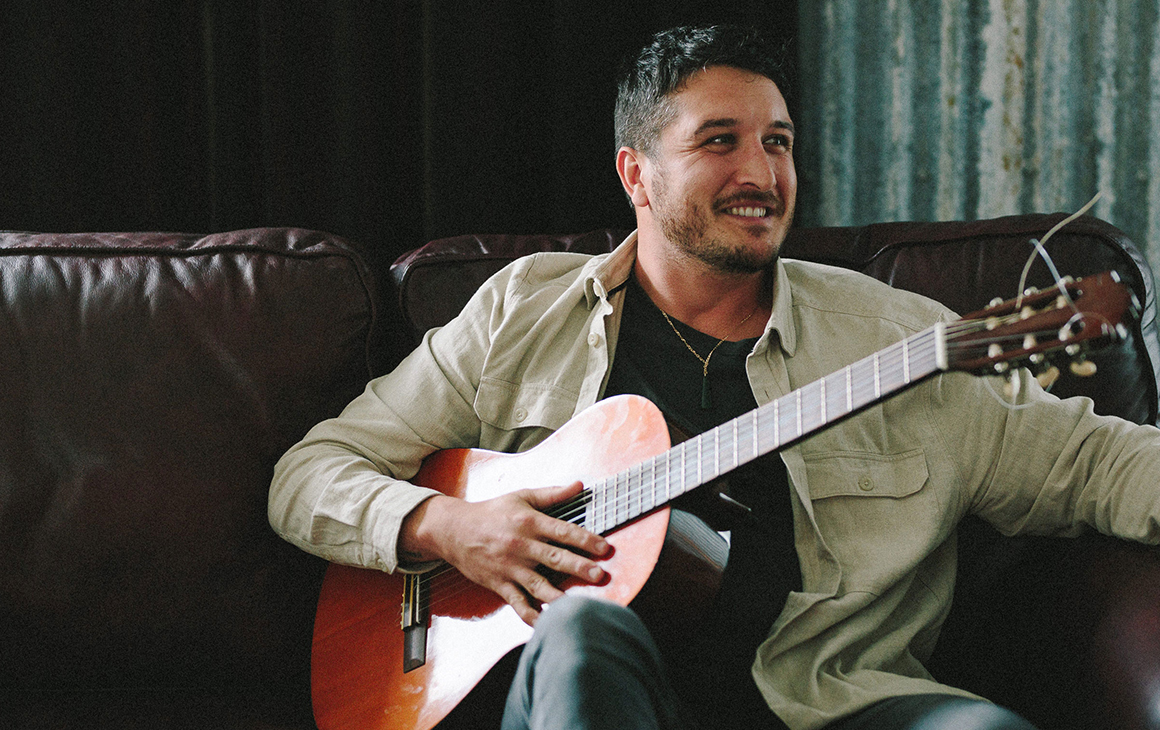 You've just dropped new music, we're loving Fade Away, talk to us about that?

Matiu: We're really proud of it. We've got a bunch of songs in the bag and now we're deep in the process of figuring out the creative and roll out. We're not sure how it will be packaged in the end. Maybe it's like an add on to the existing album that came out last year or it's an EP. Shit is changing so much right now, especially how people digest music and content so we're trying to stay open and roll with the punches a little bit.

Your te reo version of Don’t Forget Your Roots, Kia Mau Ki Tō Ūkaipō, is amazing. Going forward are you hoping to include more maori culture and language into your music?

Matiu: Yes absolutely. Perhaps not as on the nose and as obvious as [Kia Mau Ki Tō Ūkaipō] but we're always inspired by our culture, both Maori and the Pākehā. We have other songs where we use traditional instruments that are deeply buried in the sonics of the song, like Sundown. And then other ones it's more like culturally significant sounds, words or feelings that come through in the music. But yes, everything we do will have our culture in it somehow. 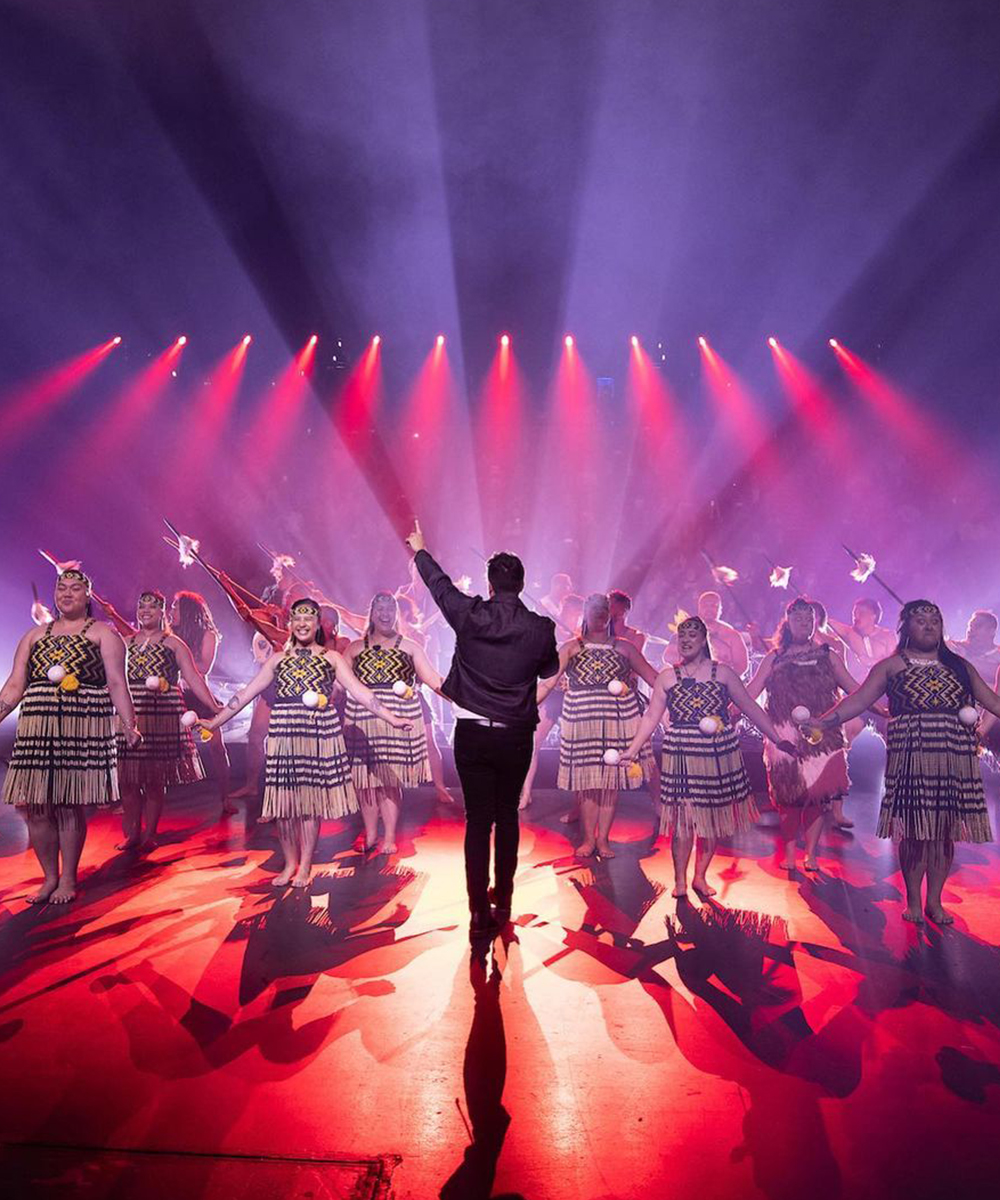 Let’s round this out with some quickfire questions. Hit me with the first thing that comes to mind. TV show or movie that you've been binging the hell out of?

Matiu: Ratched on Netflix. It's pretty strange but it's worth a watch.
Chris: Tim Minchin's Upright, it's fantastic.

First place you want to travel to when the OS borders open?

Chris: I want to get back to Japan.
Matiu: Tokyo would be sick!

Chris: Paul McCartney.
Matiu: A young Lauryn Hill, back in the day.

Fave city that you've performed in? Aside from NZ of course.

Matiu: Toronto was really cool, I'd like another chance to play there. And also Hamburg.
Chris: I'm a Darwin boy and we got to play there for the very first time recently and I really loved that. Far too hot, but felt really nice to play in my hometown.

Catch the trailer for Till The Lights Go Out below: