The South Korean island of Jeju (Jeju-do in Korean) is practically made for travellers. Not only does it boast some of the freshest seafood around (gathered by legit mermaids, more on that later) but it also has hikes aplenty to help burn off any guilt from say, that third helping of mackerel at lunch.

Here are 10 reasons why this underrated island needs to be number one of your travel bucket list.

Mount Hallasan might just be a hiker's wet dream. Standing at 1,950 meters above sea level, Hallasan, a dormant volcano, is the highest peak in South Korea, and boy does it show. With a stellar view and crater peak 400 meters in diameter, Hallasan may give your legs the workout they never really wanted but those post-holiday pics will make the sweaty hours totes worth it. This big one is also credited with creating the entire island, so all in all, pretty impressive.

If the height seems like more than you and your fresh Kathmandu membership can take, don’t fret because it’s actually an okay hike. In fact, you can make it to the peak and down in a single day. The mountain also has seven scenic trails that ring in at fewer than 10 kilometres each so, no dramas. 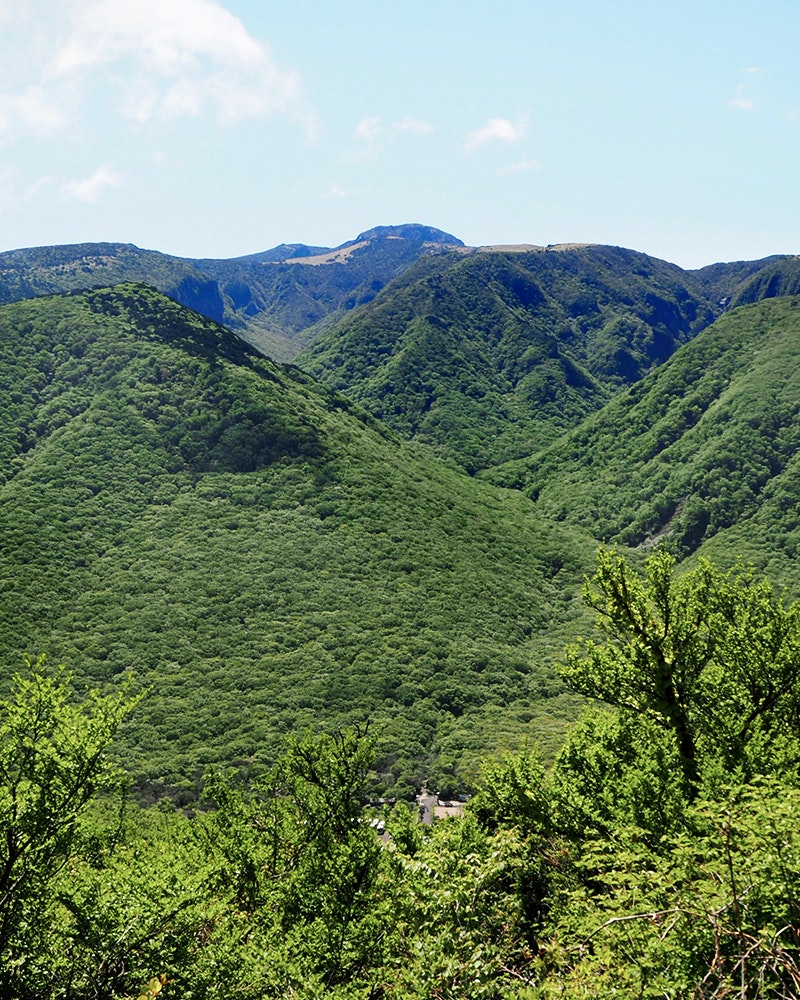 While we’re on volcanoes, you should definitely check out the lava tubes at Manjanggul Cave. Resembling an underground railway, the cave was formed thousands of years ago by cooling lava as it snaked its way through the earth. Aside from marvelling at the awesome (or terrifying) power of lava, you’ll also get to see lava flowstones, which put stalactites worldwide to shame. These bad boys emerged as lava melted bits of the tunnel’s ceiling and walls. What’s left are tendrils of varying sizes and shapes, which we’ve taken to calling lava ‘blops’. One Google search and you’ll see we’re not wrong.

Don’t pack away your sturdy socks just yet, because there’s more hiking to be had; ‘Olle’ simply means ‘winding coastal trail’ in Korean, so you know what you're in for.

A tiptop way to take in all the island has to offer, Jeju Olle winds a total of 422 kilometres, cut into 16 kilometre chunks, and is perfect for those who a) understood our sturdy sock reference and b) those who thought it meant something a bit rude. Route one is the most popular as it trails through three oreums (low, parasitic volcanoes), is just 15 kilometres and medium-ish difficulty. 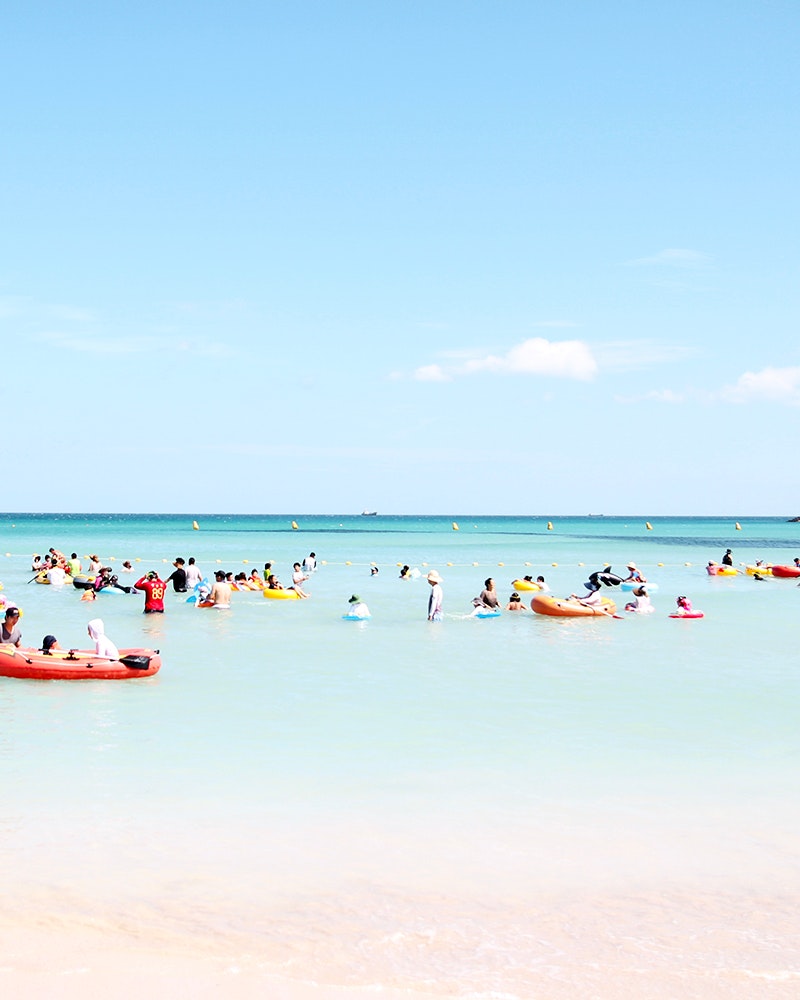 If there’s one thing we know to be true in this world, it’s that we humans are suckers for a good waterfall.

Water falling over rocks doesn’t sound like it could have a spectrum (how much variance can there be?) but Cheonjeyeon or Pond of God, proves this oh-so-wrong. It’s comprised of three sections but the whole she-bang starts from the ceiling of a cave where water glides over the first fall before gathering and moving across falls two and three. One of the waterfalls comes to rest in gorgeous crystal blue water, which is good because legend says seven nymphs descend from the heavens to bathe at night, and those guys are sticklers for a crisp, blue pond.

Prep your eggplant emojis because Jeju Island is also home to ‘Stone Grandpas’ or dol hareubangs, which are, well… kind of phallic. Carved from volcanic rock, which Jeju is lousy with, the dol hareubangs are easy to spot, just look for a big grin, long nose, hands resting on their bellies, and a ‘mushroom’ cap. Rumour has it if you rub a stone grandpa’s nose, you’ll give birth to a son.

No points for jokes about rubbing any other part of it. 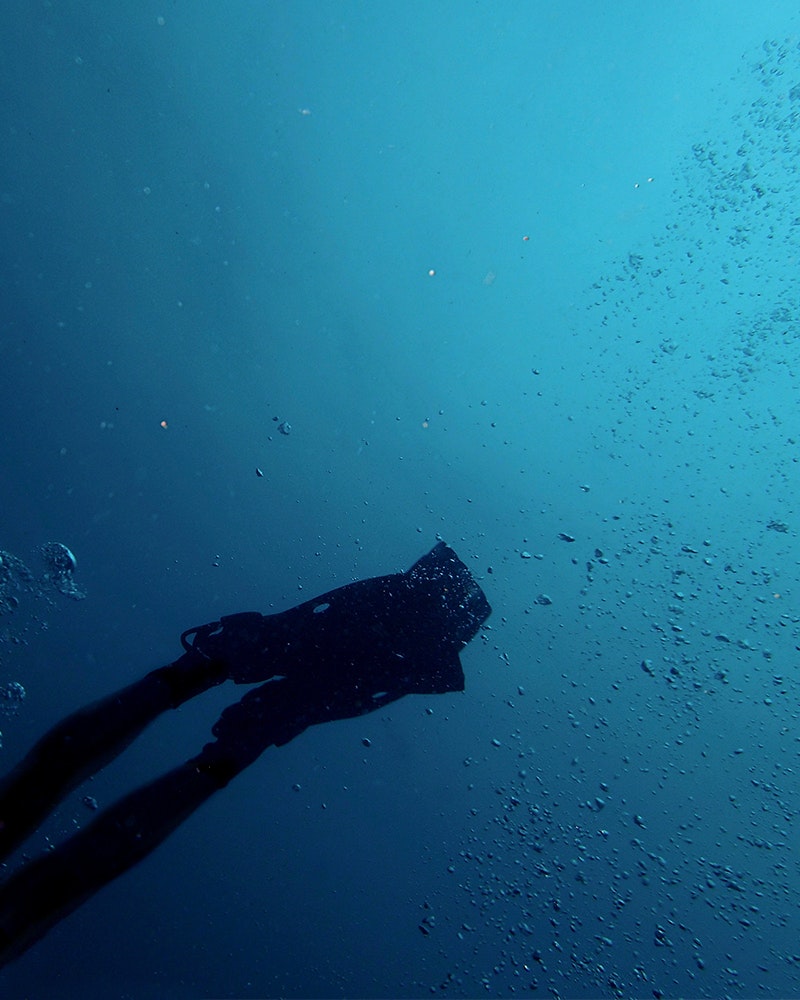 Let’s get one thing straight, mermaids pale in comparison to the kickass ladies of Jeju. As rice won’t grow on the basalt island (volcanic soil can be a bit of a pain), the Jeju women of yore learned to dive deep for octopus, abalone, clams, squid and seaweed, thus earning the name sea-women or haenyo.

Not ones to skim the surface, haenyo dive 10-20 meters holding their breath for up to two minutes without any assistance. Not impressive enough? The average age of these breadwinners is 65, putting literally everyone, not just mermaids, to shame. If you’re keen to hit two sightseeing birds with one stone, take route four of the Jeju Olle to see divers in action.

While it mightn’t be too surprising that an island would have beaches, it’s worth noting that those dotting the coast of Jeju are pretty nice. Take in Jungmun Beach to see surfers, Hyeopjae Beach for that idyllic waterfront we all crave, and Hahyo Soesokkak Beach for a lesser-known hangout and/or kayak sesh.

As the island is chock-full with basalt rock (thanks Hallasan), there are also a number of pretty nifty beachside rock formations to check out. In fact, the Three Sisters better watch out because Jeju runs the gamut of ‘tall rocks to look at’.

One of the most popular of said ‘tall rocks’ is Jusangjeolli Cliff, formed after Hallasan erupted into the Jungmun Sea. The event saw lava rapidly cool and shrink down to cubed, black rock pillars, which aside from bringing back memories of high school geography, are also cool to look at. Other formations to keep an eye out for are Yongduam or ‘dragon head rock’ and the ‘lonely rock’ also know as Oedolgae, which reaches 20 metres high. 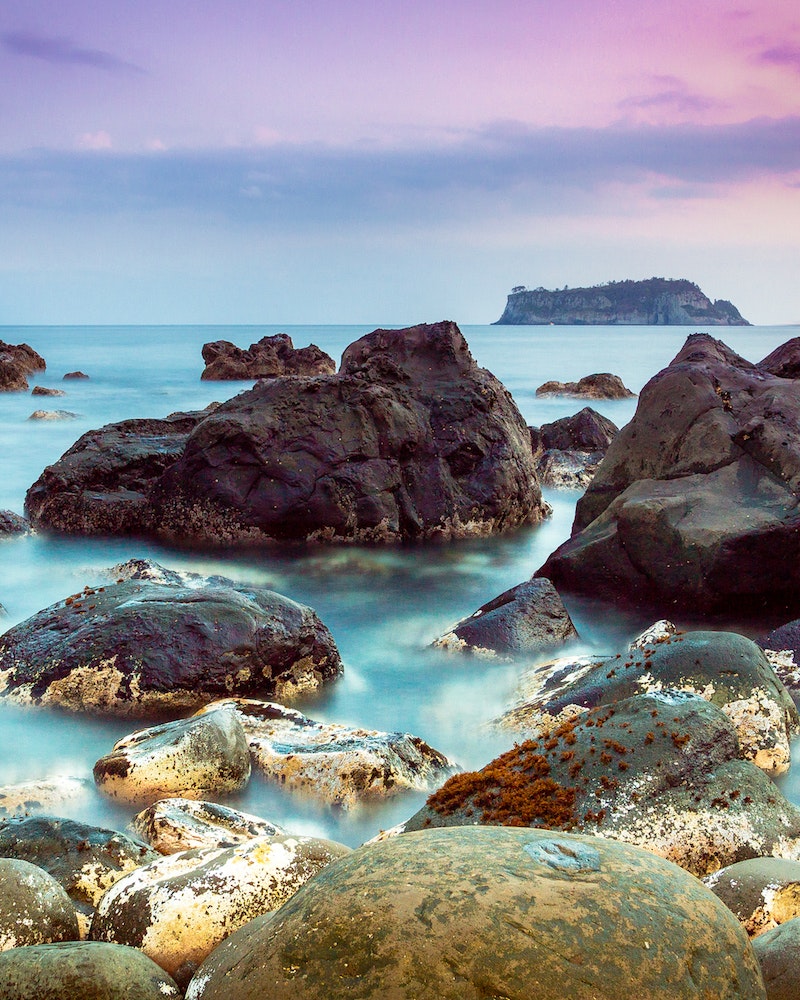 If you fell hook, line and sinker for our waterfall talk above, then get excited because the Seonimgyo Bridge is part and parcel of the Cheonjeyeon experience. The arch bridge has seven nymphs carved onto its sides to represent local legend, which says seven nymphs descend to bathe in the waterfall's pond. The Chilseonyeo Festival in May (held during even-numbered years) celebrates the coming of the nymphs, and tourists can bathe in the falls, so don’t forget to pack your togs.

Hate to break it to you but you’ve been living a lie. Okay, not all of it, just the food from the sea bit. In fact, your concept of fresh seafood might as well be day-old rubber compared to the goods at Dongmun Market in Jeju. The sprawling market is filled with every type of seafood imaginable (and a bunch of other goodies) and in case you glanced over our spiel before, it’s all super fresh. If you want the true taste of Jeju, order black pig, mackerel, sundae gukbap (Korean sausage soup with rice), Jeonbokjuk (rice porridge with abalone) or Galchi Jorim (hairtail fish soup).

You can also get the region's famous Hallabong oranges and other souvenirs here, plus plenty of snacks to hoard for later. And by ‘later’ we mean, ‘when you inevitably get a little lost’ because the Dongmun market is HUGE. 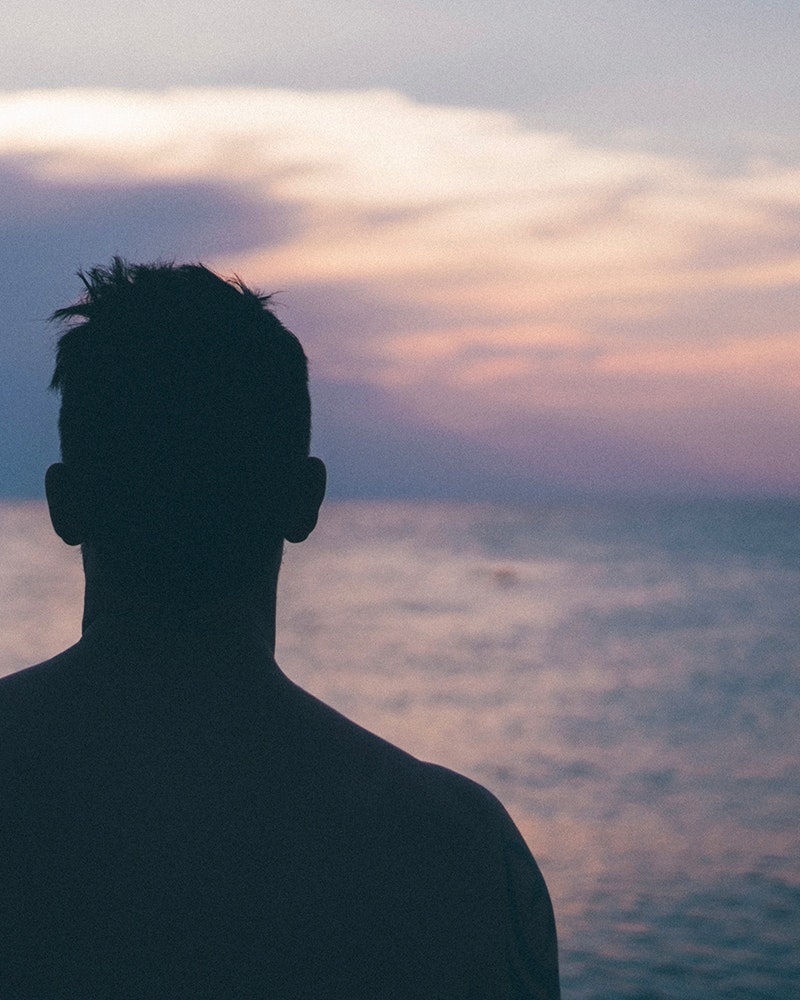 If you’ve reached this point and feel like you haven’t quite gotten enough hiking in, first of all, who are you and how do we be you? And secondly, we've got you covered.

We highly recommend a hike up to Seongsan Ilchulbong or Sunrise Peak largely because it’s just so cool; there just isn’t any other way to cut it. An extinct volcano, it’s top replaced with a green crater, Seongsan Ilchulbong rose from the sea more than 100,000 years ago and to be honest, it kind of looks like a giant took his thumb and smushed a mountain.

P.S. Go at sunset for top-notch views and spring for a sea of yellow flowers.