2014 was the year the gastro pub truly became a bona fide trend all its own in Brisbane’s dining scene. Marching into town hand-in-hand with the craft beer movement, we’re calling it: gastro pubbing is the new fine dining, and we can’t get enough.

More than just great bar snacks, a gastro pub is a drinking venue that puts the emphasis on the nosh, and some of Brisbane’s best pubs are getting in on the action with new menus and a fresh approach to pub grub. Add to that the host of new foodie-focused beer halls who have opened their doors recently, and there’s never been a better time for a Brisbane pub crawl.

These are the best gastro pubs in Brisbane.

Award-winning pub food is the name of the game at this Brisbane pub. At Statler you’ll find all your pub faves on the menu, in glorious gourmet guise. Corned brisket and Moreton Bay bug comes with horseradish slaw and pernod butter; smoked Tassie wallaby with burnt leeks and blackberry jus; and ½ a spatchcock with minted peas and gravy. There are pubby classics like roast of the day, homestyle pie, and a ham-hock burger with roasted pineapple and pickles.

A bar that embraces craft beer is nothing new. A bar that embraces craft beer to the extent that it’s used in almost every item on the menu is something different altogether. Tomahawk Kitchen & Bar in South Bank is a Brisbane bar that understand when you’re drinking beer there are certain foods that just work. Namely American-style cheeseburgers; sticky, stout-y lamb ribs; crab claws and lemon butter dipping sauce; and baked Camembert. Throw their beer-infused ice cream into the mix and you’re in hops heaven. 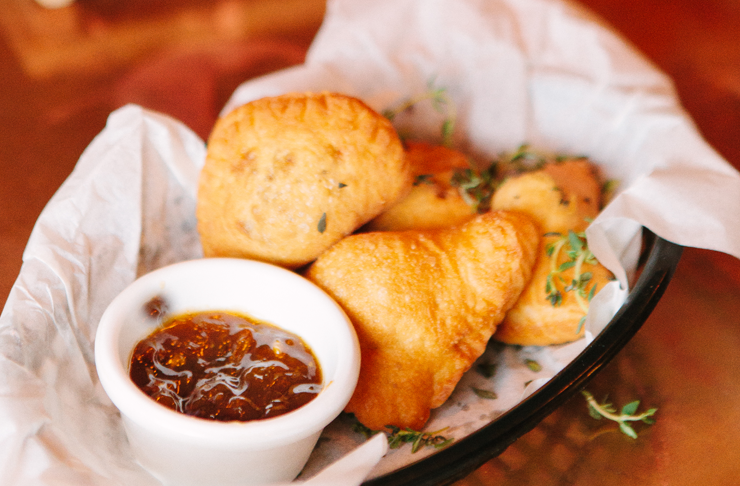 Bitter Suite has a cult following in Brisbane, with punters returning again and again for a hit of their fab, shareable gastro-pub menu. The Peking duck pancakes, the crumbed black pudding, the lamb ribs…their dishes have entered the Brisbane-foodie psyche, and we can’t shake ‘em!

American-style bar food might be all the rage right now, but no one’s doing it as authentically as new CBD bar, Buffalo. Clam-bake, chopped salads, ribs, hoagies, loads of wings, both wet and dry (including our favourite, the Bitch Sauce wings), and a formidable craft beer and American-whiskey menu have earned this newbie a spot on our best gastro pubs list.

There’s a shortage of Yorkshire pudding in Brisbane. Newstead Brewing Co is rectifying this issue, one plate at a time. Their menu reads like a love letter to meat. They’ve got old-school pies, and chilli fires, mussels, and chicken wings, and all of it’s good. One of Brisbane’s best pubs for a hearty gastro feed.

New Brisbane bar and ale house, Woolly Mammoth has a fun and quirky pub menu that goes down a treat with hungry groups. Creative and decadent mash-ups like a duck sloppy joe and fries with blue cheese dressing and bacon sit side by side with more traditional favourites like pizzas and sliders. Woolly Mammoth may be new to the scene, but it’s already become a favourite for casual and tasty pub fare. And any bar that classifies a baked camembert as a snack is A-OK by us.

The Embassy is an old-favourite in Brisbane for a drink, but a new favourite for their winning gastro-pub menu. When we’re in the CBD we make a bee-line for their slow-cooked beef brisket nachos with jack cheese, smoked pork ribs with corn bread, and Buffalo hot wings.

Read More: 6 Of The Best New Bars To Hit This Month