The Gatsby Effect is being felt particularly strongly at the moment… The film premiered in Sydney last week and the '20s inspired dress code brought some deplorable deco style to the masses. 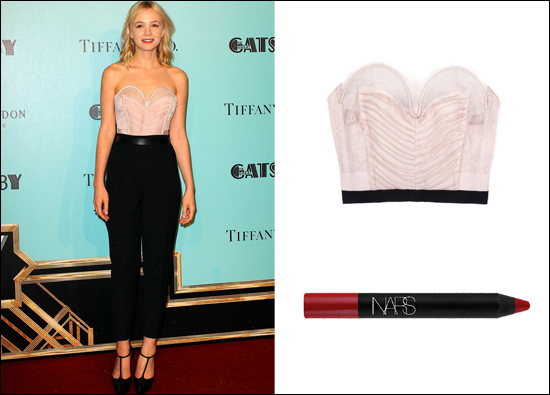 On the red carpet, it was all finger waves and fringing. While Gatsby girl, Carey Mulligan manages to pull this look off on the big screen with notable aplomb, when mere mortals try and take on this trend the results are often more bad-fancy dress than a fresh take on flapper (Kerri Anne Kennelly, I'm looking at you).

The entire Gatsby Press tour has seen Carey pull out flawless look after flawless look, and we have to say, we're impressed. She manages to hit just the right note between modernity, masculinity, and sex appeal (and even manages to give a subtle nod to Gatsby while she's at it).

Carey is a great inspiration for shorter girls to not let their diminutive stature hold them back when it comes to strong styles. While it would be easy for the adorable to Carey to go all out cutesy—I mean, the girl has dimples for god's sake, she would have to put in some serious effort not to look cute —and fall back on super girlie frocks, she instead opts for tailored, structured pieces. It's these boyish, fresh from the runway ensembles that have been earning her some serious fashion props.

To get Carey's signature style, you need to embrace the female tuxedo. Carey keeps this look fresh with cropped tailored pants (we like the deployment pants by Three of Something) and top it off with a sexy blazer with a modern cut-outs, like the Tenn blazer from Priory of Ten (find Priory of Ten at Bessie Head).

Carey deserves serious credit for her ability to mix masculine and feminine pieces with apparent ease. She chose a similar cropped trouser for the Australian Gatsby premiere, this time teaming her pants with a flirty, ultra-femme Nina Ricci bustier. Her perfectly painted burgundy lip added just the right touch of '20s glamour to an otherwise simple ensemble. Get her look in the Boyfriend's Tux Pants by Strummer and the Alice + Olivia structured strapless bustier top. And for the perfect dash of deco (and with not a bit of fringing in sight), we recommend the Nars velvet matte lip pencil in Damned (from Mecca Cosmetica).