What’s Trending In Brisbane This January

Keeping up with the best events, new openings, pop ups, and good things to eat in Brisbane is no mean feat (and we would know!). To make your life that little bit easier, and because we love a good list, we’ve teamed up with Peroni to bring you What’s Trending: A one-stop guide to everything worth checking out in your city this month, so you won’t miss a thing.

Well, didn’t 2016 just flash before our eyes? We’re certain you’re still nursing your giant food babies (and we dare say, a self-inflicted headache or two) after all of that festive eating, but that’s no excuse to not haul yourself off the couch; there’s a lot going on in Brisbane this January.

From killer laneway festivals to Australia Day celebrations, Brisbane is where it’s at this January. 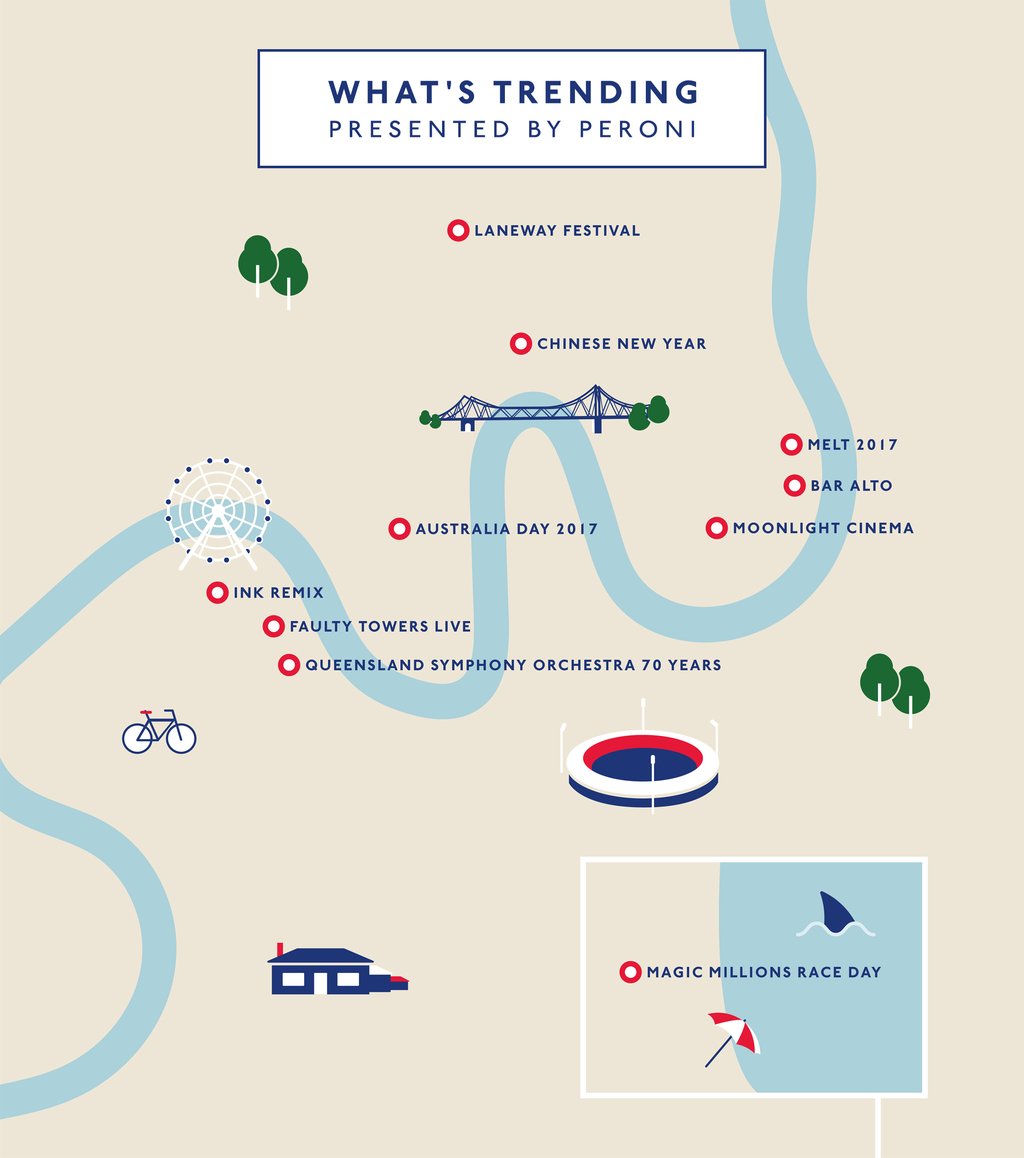 #1. Summer Was Made For Riverside Beers

Just because you’ve probably embarked on a new year's resolution to get fit, eat right and do practically everything in moderation in 2017, doesn’t mean you shouldn’t treat yourself to a little lunch. You gotta eat, right? Make your cheat day that little bit special at Bar Alto; the weather is perfect for frosty evening beers on the terrace with some of the finest Italian fare Brisbane has to offer.

Show this fabulous country of ours the love it deserves this Australia Day 2017! From the annual Great Australian Bites event taking place on the banks of the Brisbane River at south bank, to the Australia Day parade in the CBD, or a few drinks and a feed at your favourite watering hole, gather your people, throw on your best pair of thongs and get celebrating! Australia, you're a gem.

The very first exhibition of its kind in Queensland, Ink Remix is travelling the east coast from the Canberra Museum and Gallery showcasing the most progressive contemporary artists from Hong Kong, Taiwan and China using solely ink as their medium. Combining stunning ancient techniques for the 2016 voyeur, Ink is a stunning exhibition jam-packed with some seriously creative and beautiful pieces.

#4. A Touch Of British Charm

Adapted for the stage by no other than John Cleese himself (huge kudos), Faulty Towers Live is the first stage version of the much-loved British comedy. Join the manic, condescending Basil Fawlty and his hilarious side-kicks of hotel staff in this unmissable stage show. Rollicking laughter aplenty.

#5. Cool Off With Some Culture

Brisbane’s iconic Melt is back at Brisbane Powerhouse for a huge 2017 season, with a line-up that will send any theatre-goer into a total tizzy. This heady combination of film and theatre exhibitions on LGBTI Culture is not to be missed; from the (notoriously wild) opening night event, to comedy, drama, artist exhibitions and a whole lot of incredible performances, this is a Brissie calendar highlight each year for a reason.

Held in the stunning surrounds of New Farm Park, this is the largest, most beautiful outdoor cinema season in Brisbane! Dust off your picnic rugs, and come see a combo of your all-time favourites, smash hits and sneaky advance screenings of films such as Lion (Oscar buzz aplenty!). Popcorn at the ready!

#7. Get Beachside This Race Day

The biggest race day but for Melbourne Cup, the 2017 Jeep Magic Millions Race Day is an incredibly glamourous affair! Hosted at the gorgeous Gold Coast Turf Club, get behind nine fast-paced races with some serious $$$'s to be won. This is no time for casual attire; dress to the nines and make your way to the coast for an incredible day out.

#8. Celebrate The Year Of The Rooster

One of the most colourful events in Brisbane, every year during Chinese New Year the city comes alive; chock full of colour, celebrations and incredible food! The year of the rooster will be no different, with the annual Chinese New Year parade taking place in Chinatown and an evening of traditional entertainment (think lion dancers, fires shows and traditional performances), live music, Asian market stalls and a heap of interactive workshops.

It’s been a whopping 70 years since the Queensland Symphony Orchestra formed, so what better way to celebrate this incredible milestone than showcase their (frankly epic) skills in their 2017 season. Even if classical music isn’t usually your cup of tea, listening to the talent of acclaimed conductor, Alondra de la Parra and renowned musicians play in the heart of south bank is something to cross off the bucket list.

#10. The Festival Of Festivals

Laneway Festival has the most ridiculous line up ever this year! The country's best laneway music festival is pulling out the big guns this January in Brisbane, including sets by Camp Cope, White Lung, Young Thug, Luca Brasi and a whole host of ground-breaking global artists, including Triple J up and comers. A no-brainer for music-lovers and festival fiends alike.

Loved this list of January's hottest trends? We've teamed up with Peroni to bring you more of Brisbane’s best travel, design, food, style, and fashion content. You'll find it all here.

We're beyond thrilled to partner with Peroni to bring you the What’s Trending series—our monthly guide to the hottest new openings, events, and Instagrammable happenings in Melbourne. Each edition of What’s Trending is researched and recommended by The Urban List, and served to you by Peroni—our go-to beer when we’re after something deliciously crisp to sip. Look out for our monthly Peroni What’s Trending hit-list for everything hot in your city right now, and while you’re working your way through the list, relax with a long cold Peroni at the hotspots marked with a ribbon. Buon Appetitio!