What’s Trending In Brisbane This March

Keeping up with the best events, new openings, pop ups, and good things to eat in Brisbane is no mean feat (and we would know!). To make your life that little bit easier, and because we love a good list, we’ve teamed up with Peroni to bring you What’s Trending: A one-stop guide to everything worth checking out in your city this month, so you won’t miss a thing.

We’ve gone and done it, we’ve officially said goodbye to yet another scorching summer, but just because the nights are getting cooler (not that it ever really does here) doesn’t mean for a second that Brisbane is resting on her laurels. Heck no!

This month in Brisbane is all ice cream festival here, award-winning Broadway show there; it’s enough to make your head spin! So, in case you’re not sure what to do with yourself this March in Brisbane, read up on the below and start making social plans, stat! 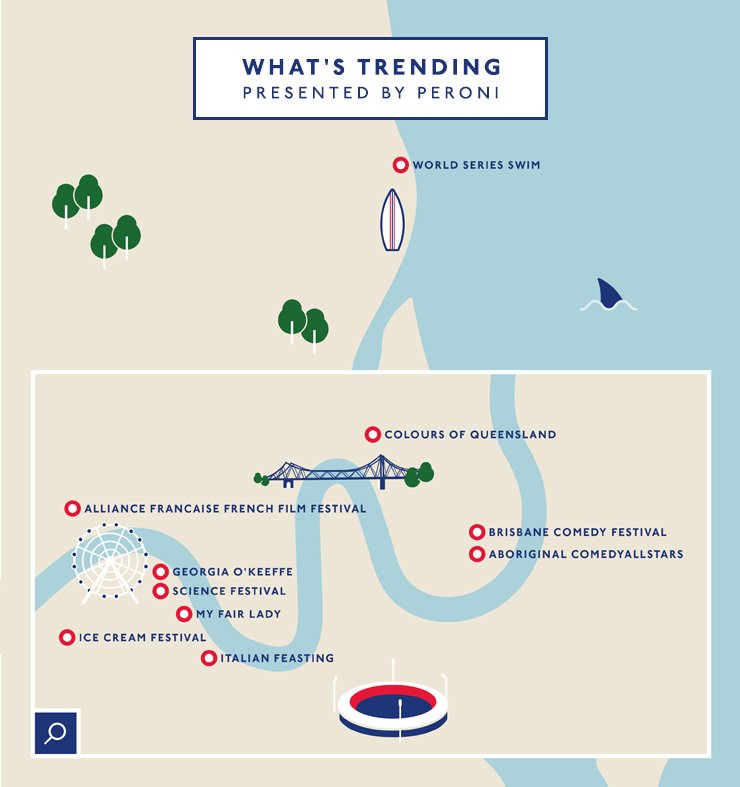 Brisbane’s really getting a taste for walking the boards in 2017 (Matilda blew our tiny minds!), and with the arrival of My Fair Lady—directed by Julie Andrews, no less!—you’ll need to book your tickets fast; they’re flying out the door! So practice your elocution and pronunciation Brisbane, and throw on your fanciest rags for a night where we can all pretend to be a fair lady just this once….

There’s not many things in life that get us quite as excited as an evening of carb-loading. Add in a gorgeous CBD view and riverside location and we’re anyone’s. If pasta and pizza are your one true love in life then you ought to book a table at Popolo. Make sure to go full Italian with no less than three courses, because you’re a grown up and you can do these things. Because who can resist, pasta, pizza and dessert?

#3. The Painting Greats Arrive For An Exclusive Brisbane Showcase At QAGOMA

Anyone worth their artistic clout knows that Georgia O’Keefe was one of the most influential American painters of the 20th century. Her iconic flower and desert landscape paintings are truly magnificent in the flesh, are making their way to QAGOMA! Joining O’Keefe are Aussie pioneers, Margaret Preston and Grace Cossington Smith, too. The gang’s all here!

#4. We’ve All Gone Science Mad For The World Science Festival

With a jam-packed program for 2017, the World Science Festival has awoken our inner scientist—we’re all regular little Einsteins didn’t you know? The 4-day festival is great to get the little ones involved in hands-on workshops, but for us big kids there’s exclusive screenings of iconic sci-fi films (A Space Odyssey, anyone?), seminars and presentations, breakfast Q & A’s with some super smart scientists, plus an entire series of events based around World Water Day. Go on, expand the mind…

#5. LOL Your Socks Off At The Brisbane Comedy Festival

We’re all in need of a proper belly laugh every now and again—keeps you young, you know. So of course we’re all going to be flocking to this year’s Brisbane Comedy Festival! Known to showcase hilarious up-and-comers in the industry mixed with local and national comedy icons, there’s never been a more upbeat time to hang out at the Powerhouse.

#6. Scream For The First EVER Ice Cream Festival

This is not a drill, folks, an ice cream festival really is coming to town! For the first time ever, get your flavour hit from the biggest names in the Brisbane gelato game at the inaugural Ice Cream Festival; Gelato Messina, Mister Fitz, and Queen Of Pops to name just a few will all be flogging their frozen wares for a day long ice cream gorging fest. Clearly, you’ll be going. Except if you’re lactose intolerant… Maybe stay away

Bienvenue to sexy film noir, glorious comedy—French-style, naturally—and all of the fashion Parisienne at this year’s Alliance Francaise French Film Festival! Whether you’re an astute movie buff, or you have a penchant for foreign film, the French do drama and style in spades.

#8. Togs On For The Cooly Classic World Series Swim

We’re calling it: ocean swims are the new fun runs. Fact. If you love nothing more than to blow away the cobwebs by going for a refreshing dip in the ocean, why not make it competitive? Held at Snapper Rocks, Coolangatta season swimmers will revel in the Cooly Classic’s 2km and 3km timed swims, while newbies, or those of us that like to drop things back a gear will love the Cooly 1000, the 1km short course. Ocean swimming not for you? There’s a tonne of things to do surf side, from prize giveaways to fresh coffee and snacks, plus you can cheer on your mates from your beach towel.

#9. Celebrate The Incredible Colours Of Queensland

In what is a stunning outcome from the 2016 Queensland Regional Art Awards, the Colour Me Queensland exhibition—held at the iconic Judith Wright Centre in Fortitude Valley—will present 35 incredible regional Queensland artists. Specifically designed to showcase the breadth of talent outside of metropolitan hubs, Colour Me Queensland offers a rare glimpse of the outback through the eyes of a few very talented locals.

Get ready to ‘lol’ your socks off with three of the funniest Indigenous comedy acts in the game. Totally original, funny, witty and irreverent as you like, Aboriginal Comedy Allstars is the highlight of the Brisbane Comedy Festival. Miss out at your peril.

Loved this list of March's hottest trends? We've teamed up with Peroni to bring you more of Brisbane’s best travel, design, food, style, and fashion content. You'll find it all here.

We're beyond thrilled to partner with Peroni to bring you the What’s Trending series—our monthly guide to the hottest new openings, events, and Instagrammable happenings in Brisbane Each edition of What’s Trending is researched and recommended by The Urban List, and served to you by Peroni—our go-to beer when we’re after something deliciously crisp to sip. Look out for our monthly Peroni What’s Trending hit-list for everything hot in your city right now, and while you’re working your way through the list, relax with a long cold Peroni at the hotspots marked with a ribbon. Buon Appetitio!