A lot has changed in Sydney in the last 10 years. Sometimes and in some quiet pockets, late at night and in the morning when the low rumble of road work kicks into gear just about everywhere, it can feel like the soul of this storied place has all but packed up and gone.

Ten years ago, a budding street artist from Brisbane threw an art show in a garage belonging to an infamous, thriving, neon-drenched Kings Cross strip club called Porky’s. It was grungy, bold and kind of unforgettable—a seminal move for Anthony Lister, setting him up as a major player in Sydney’s own underground art culture and on his way along the shaky path to art stardom.

Sure, come 2009 everything was a little shinier than it had been across the 20th century—but the grit and creative energy kicked on. Gallerist Joseph Allen Shea held wild exhibitions with major talent in abandoned buildings, stone churches and old sex shops; there was an art gallery in the Kings Cross council car park, there was Chalk Horse in a garage on Lacey Street, there was Ben Frost, rooftop art parties—and a newish guy on the scene with a distinctive tag: Lister. 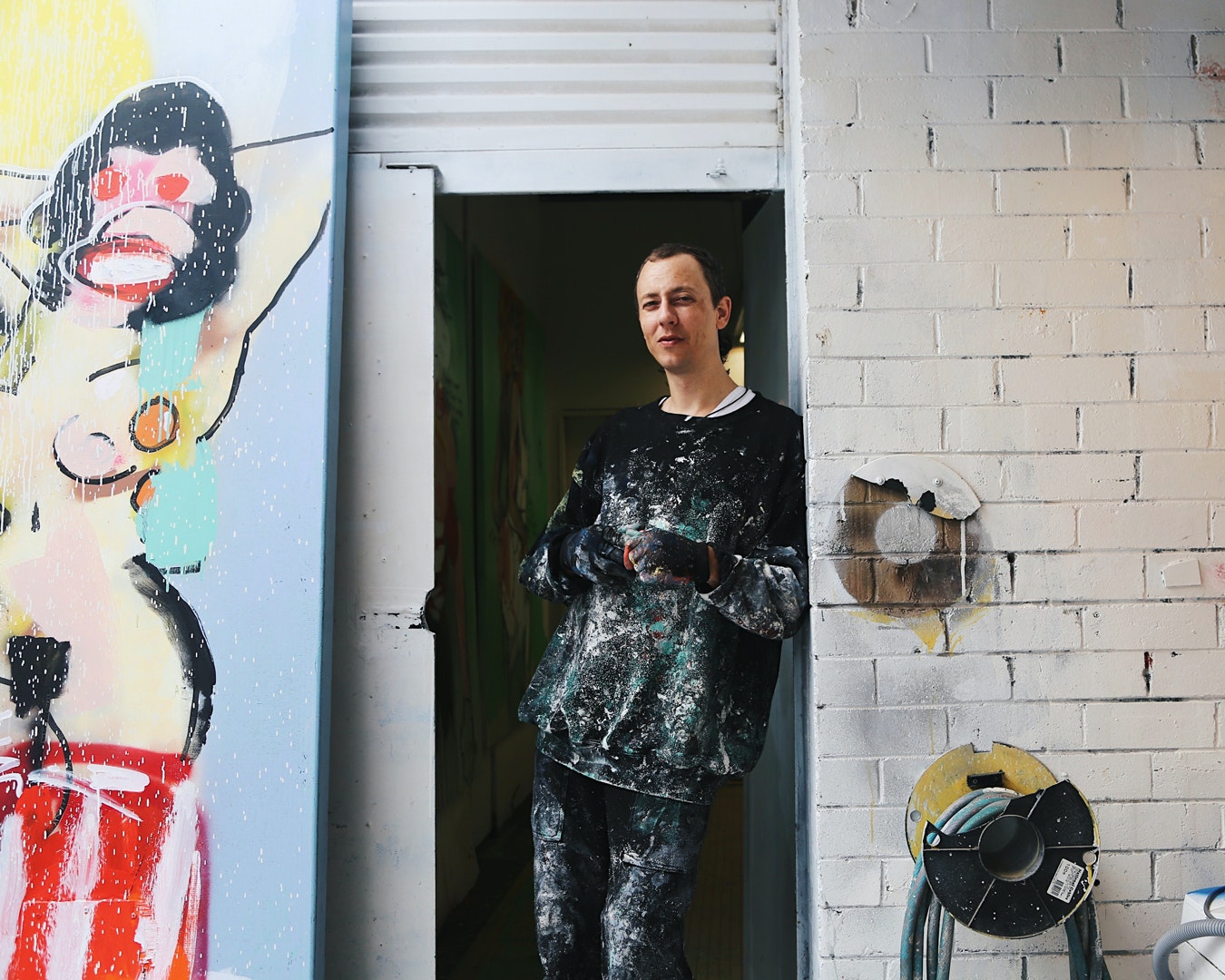 “So how does one get culture back?”

In 2019, Lister is contemplating the change in momentum in Sydney’s art world across the last decade. We’re in his heavily paint-splattered Marrickville studio, piled with new paintings, towering canvases drenched in colour and stacks of painted paraphernalia—all parts and pieces of a major new show Lister’s called CULTURE IS OVER.

For it, he’ll be returning to Porky’s—a move he says wasn’t really planned or a part of some inflated commemorative scheme, simply an opportunity to flick some heritage-listed red and pink neons back on and a chance to “contribute back to the city.”

As a street artist, Lister has a deep respect for the city and the wiry chaos and culture it breeds, and he wants to give back. “I’ve always been attracted to the deep, heavy, congested city atmosphere—I like it where it’s craziest,” he says.

“I lived in New York for a few years, and I always felt really comfortable in Times Square, where shit is going everywhere. I felt like I knew where the deepest end of the pool was. I’d dive into the deep end and be like, ok this is the furthest I can go, so I can understand the rest of this more easily. That’s just where my brain is comfortable.” 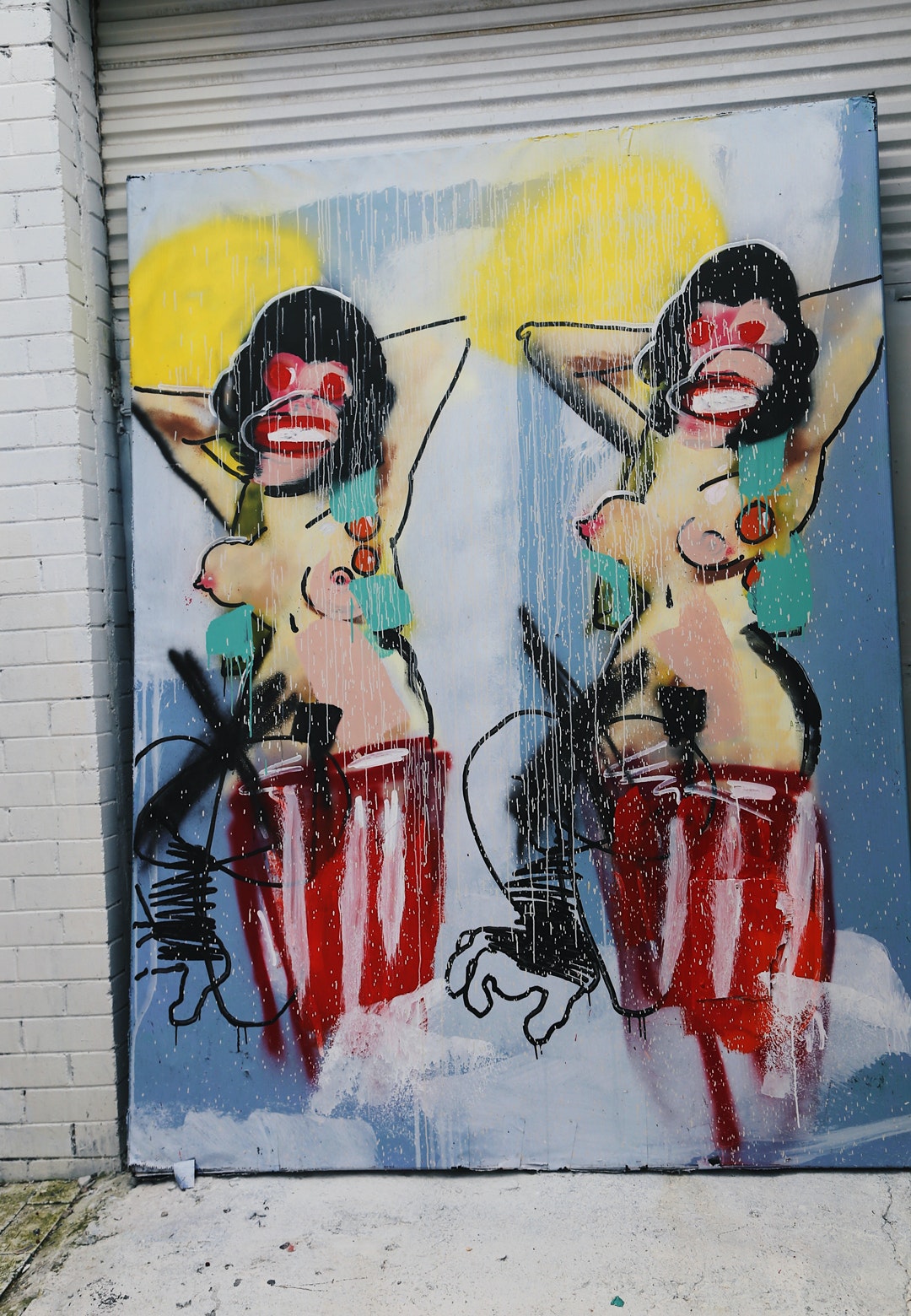 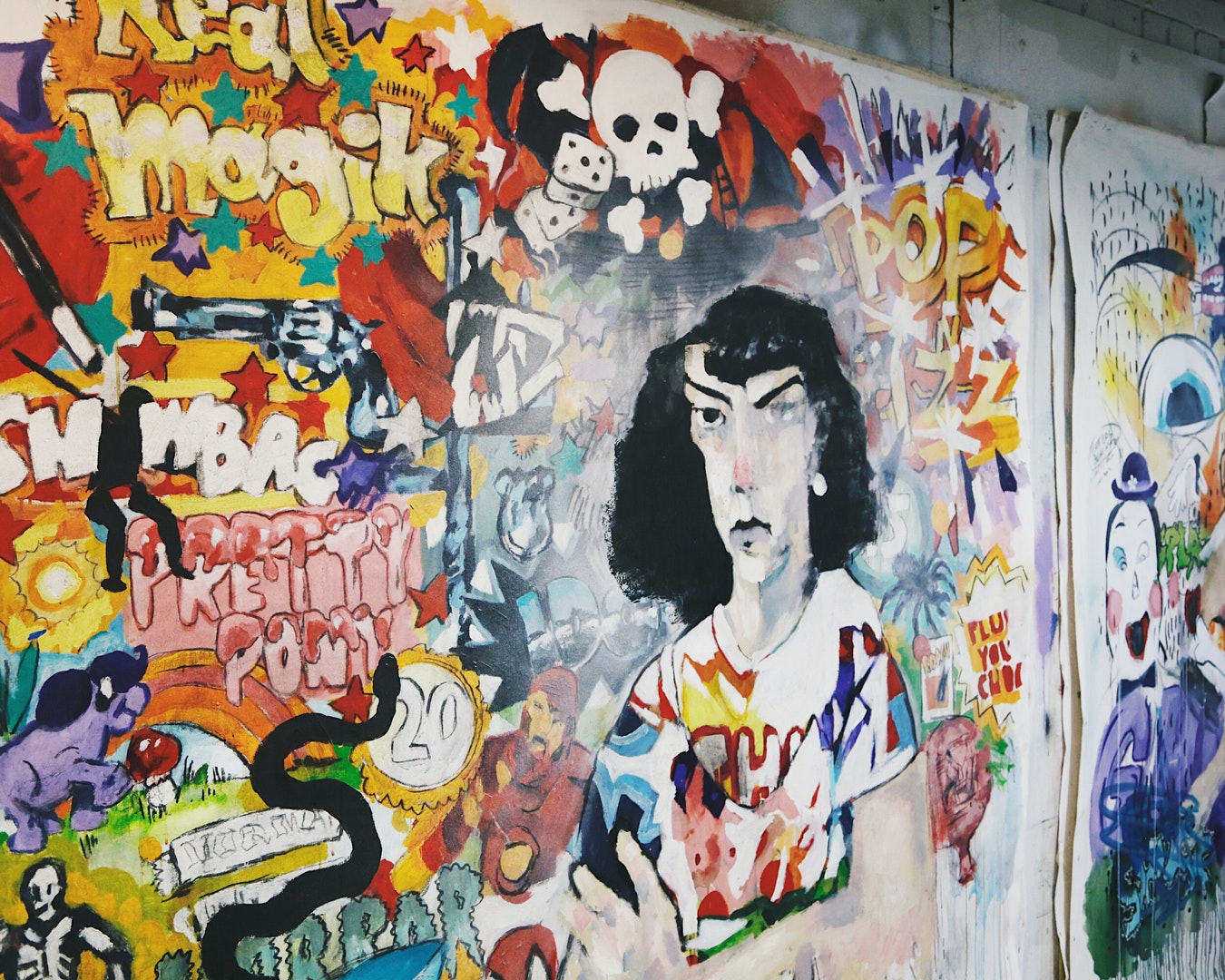 “Ten years ago, Porky’s was fully operational, it was a bustling business,” Lister recalls about the site. “But now, the whole space is empty.” When he and his team set upon the site to begin installing CULTURE IS OVER, they found made beds, bathrobes and high heels. “Like they’d just walked out on the joint; they didn’t pack up.”

Needless to say, putting this strip club show on has been more trying ten years on: Lister’s had to take on the lease and the electricity bill; he’s engaged a neon specialist to fix the lights, and had to remove the seedier remnants of the building’s past to clear out and make way for some 56 new artworks.

CULTURE IS OVER centres on one of Sydney’s urban legends—specifically the unidentified masked “Horned Man”, who is said to have had some very creepy, paranormal part in the 1979 ghost train tragedy at Luna Park. In his studio, Lister pores over scrapbooks stacked with research, clippings and sketches that trace this strange slice of history. He’s interested in the blurry lines between fact and fiction, the power the authors of history hold, and the blind moment that history becomes culture.

“There are a lot of illusions, and smoke and mirrors type shit. Half-way things,” he says of the content of the exhibition. ATM machines filled with spiders, Ouija boards, rotating clown heads and merch like a Horned Man Ken doll all feature. Most canvases have been dressed in a bright seafoam green paint—referencing green screens as “a manifestation of all the fake realities going on” and how easy it is “to formulate a new version of ourselves on social media.” 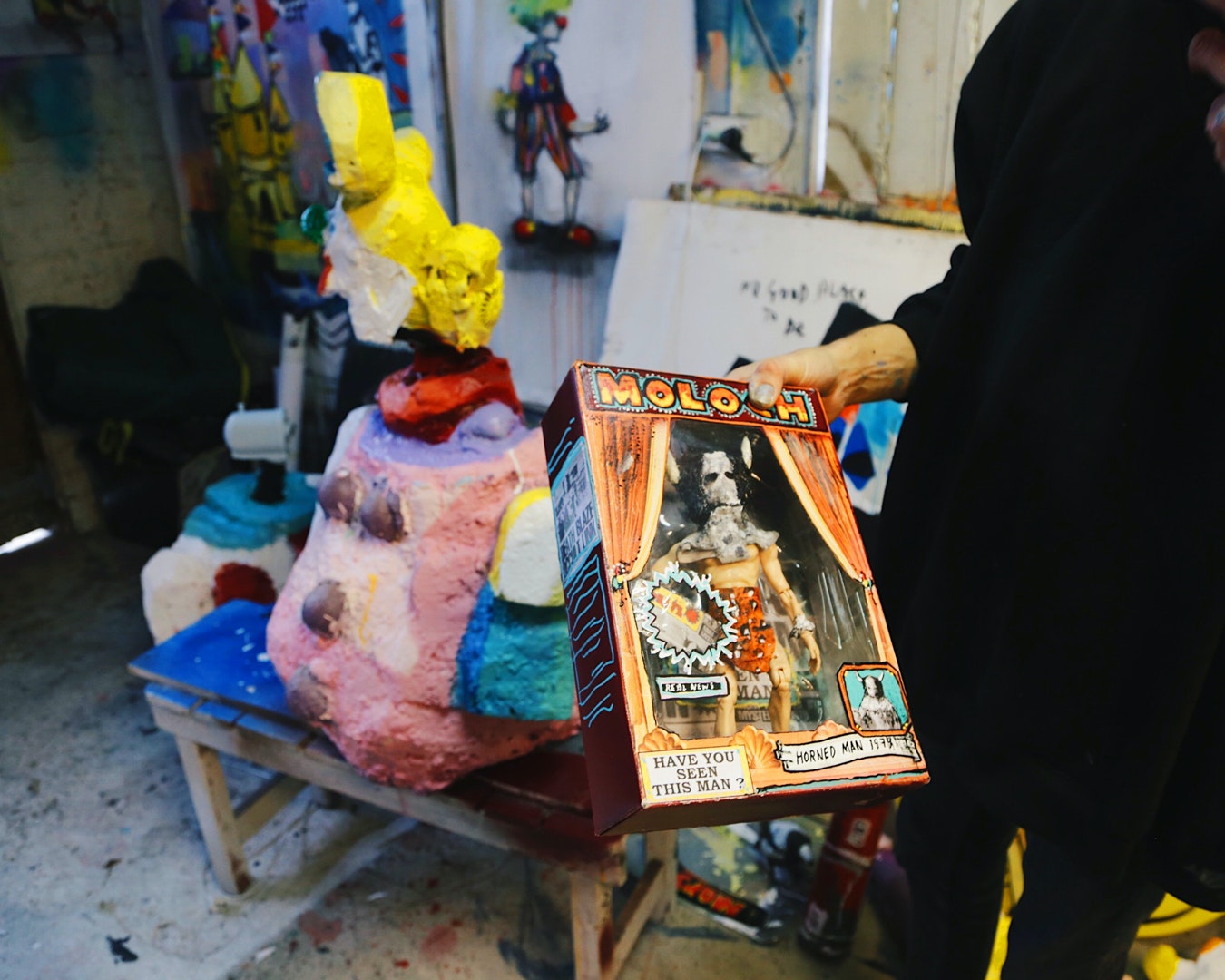 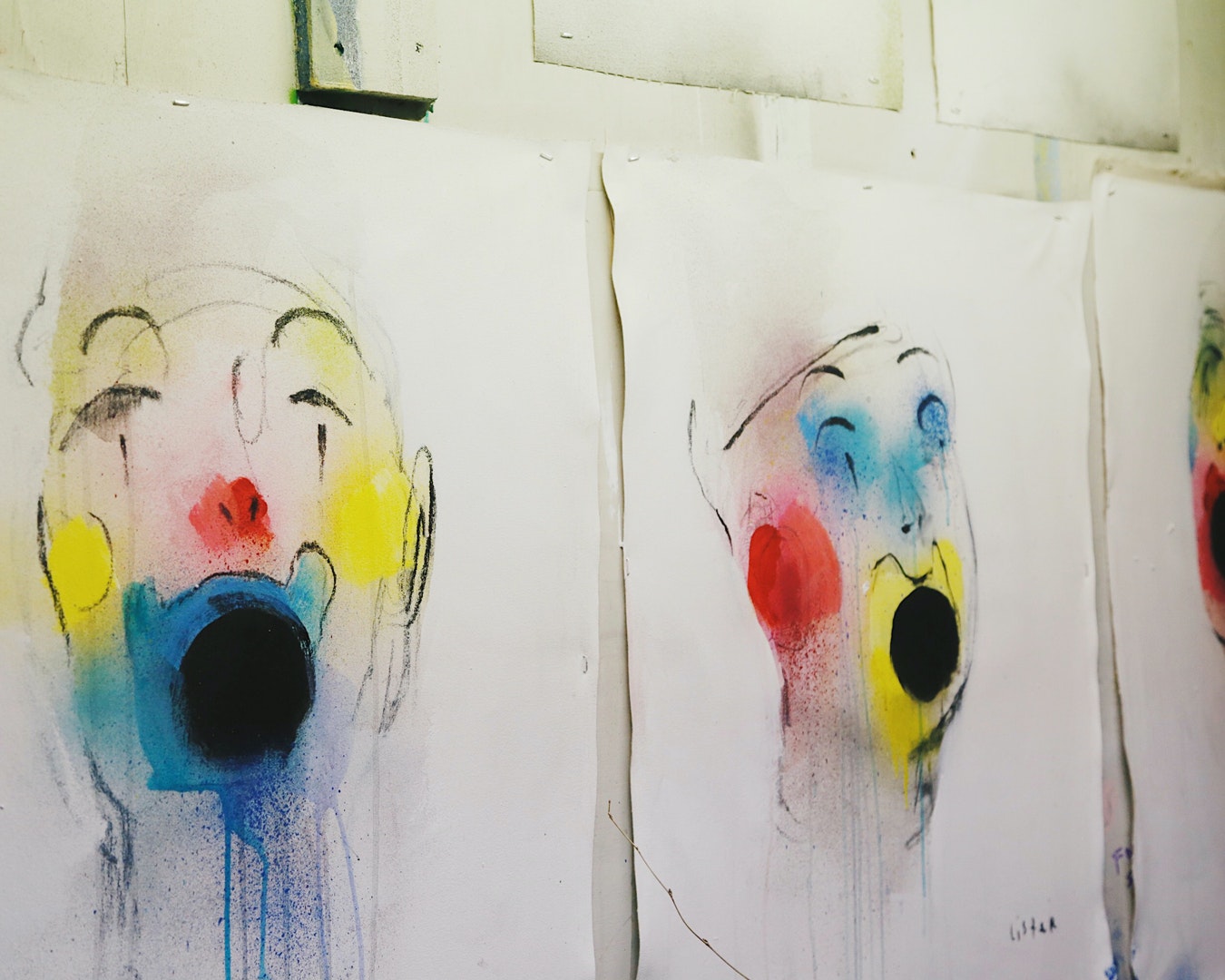 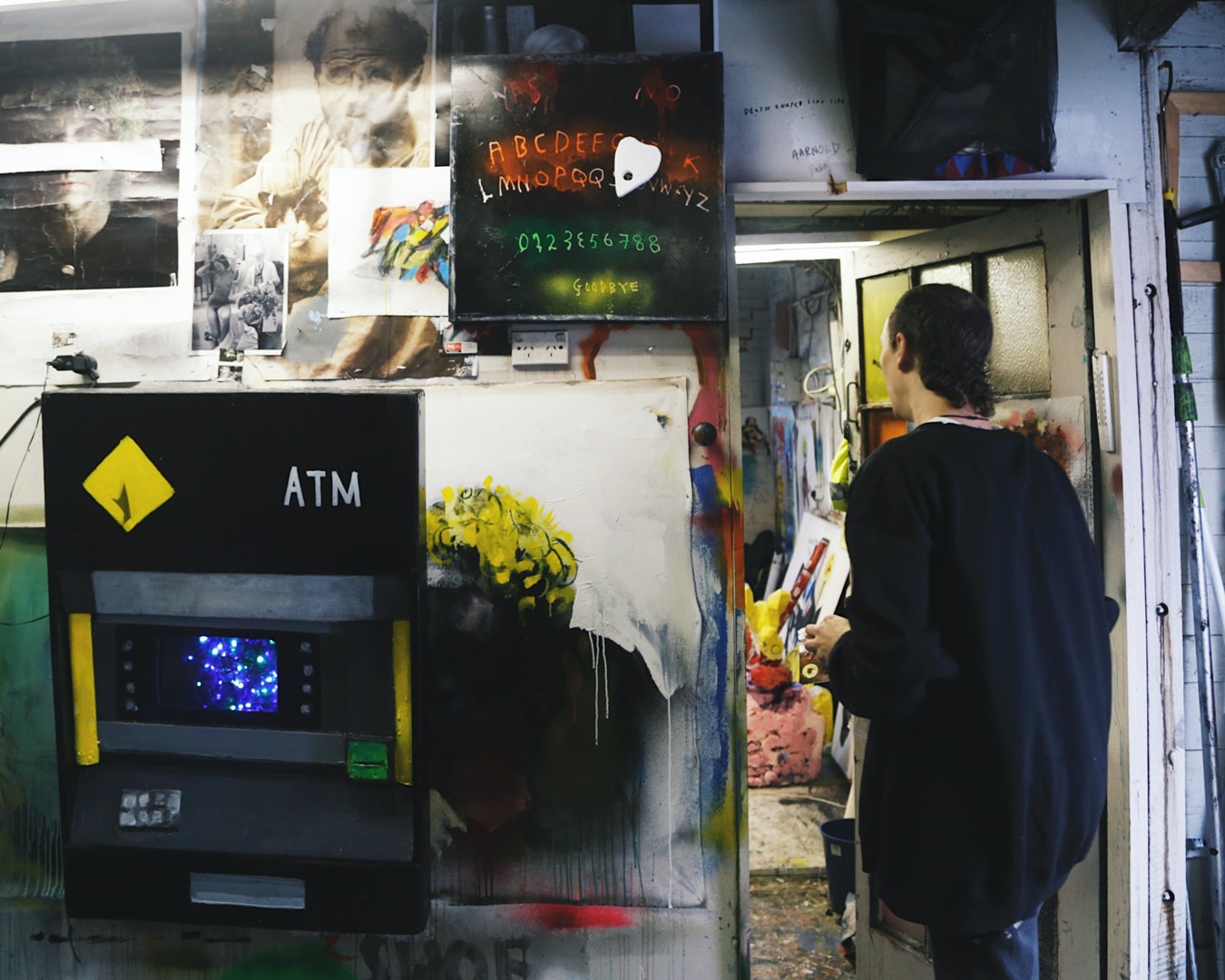 “It got me thinking about the anonymity of the Horned Man and these myths and characters that can just come and go, built out of the imagination of whoever saw them. Who came up with the bunyip? What even is a bunyip? Big Foot just became Big Foot, and that’s a big deal. Who knows, maybe that’s real?”

But while Luna Park’s Horned Man has been likened to a really (like, really) spooky pagan demon, Lister’s chosen to skip the Halloween horror vibe and tell a different story—played out in a video piece in CULTURE IS OVER, featuring another Sydney icon: Barry Otto. 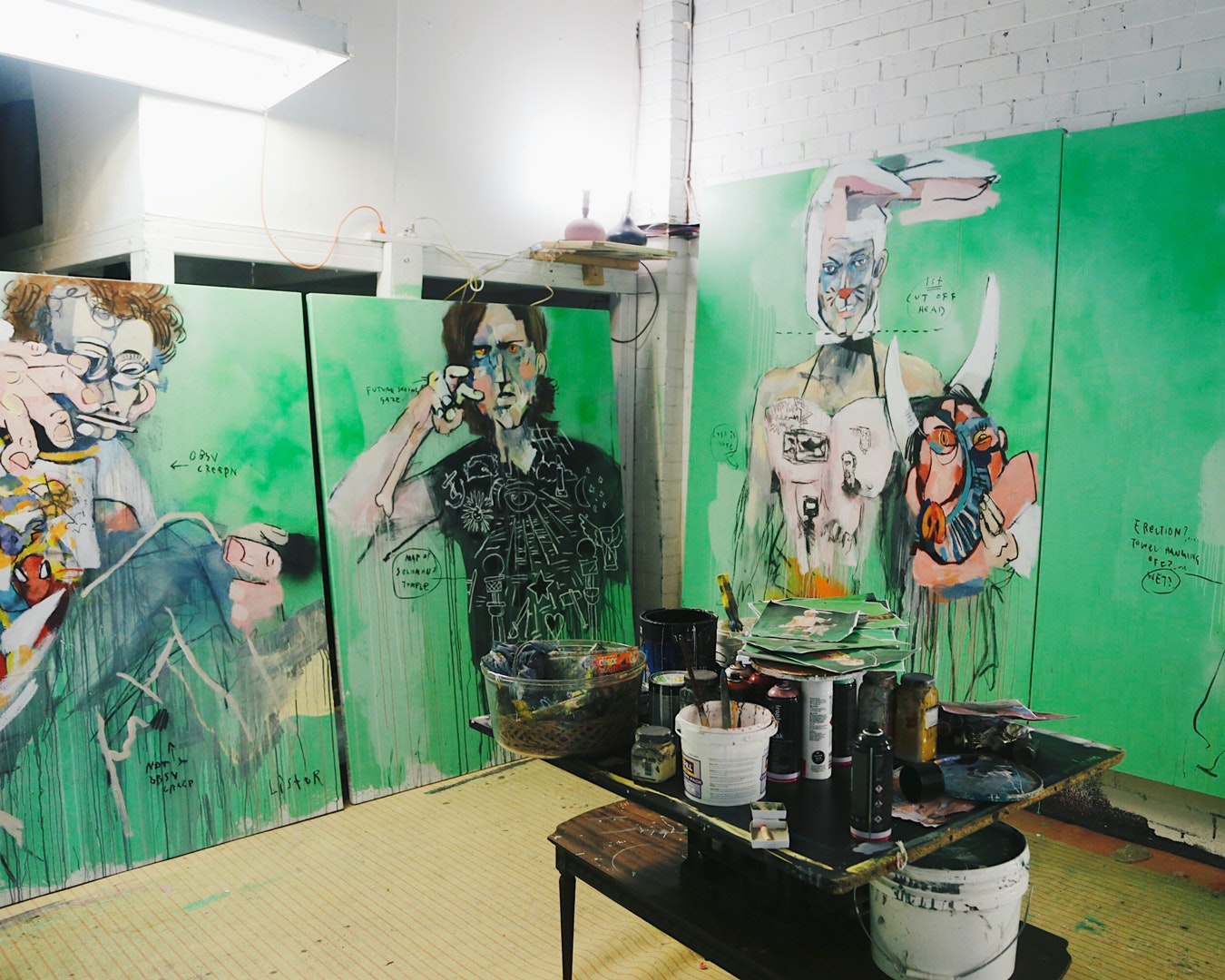 The new Kings Cross show has arrived at an interesting time in Lister’s narrative too. Earlier in 2019, a deeply personal doco on the impact that the past decade has had on Lister’s close-knit family dropped on Netflix. Called Have You Seen The Listers?, it’s a compelling watch, made up of family footage and narrated by Lister himself. It’s insightful and, at times, brutally open, but maybe not so surprising for an artist deeply concerned with censorship, the green screen of social media, and with history, legends and myths perpetuated by the powerful.

“It is my story, and I did film a lot of what you see—but I didn’t film it with any intention for it to be told in any way,” he explains. “I just let [director Eddie Martin] do what he does best. He did what he wanted, he made the film he wanted to make—and I think that’s why it worked.”

“Of course, things came out in it that I wouldn’t necessarily introduce myself with or tell anyone straight up about—I guess it just is what it is. Benefits have come from that, like that deep end of the pool thing—things are out there. All the skeletons are out, so it is what it is.” 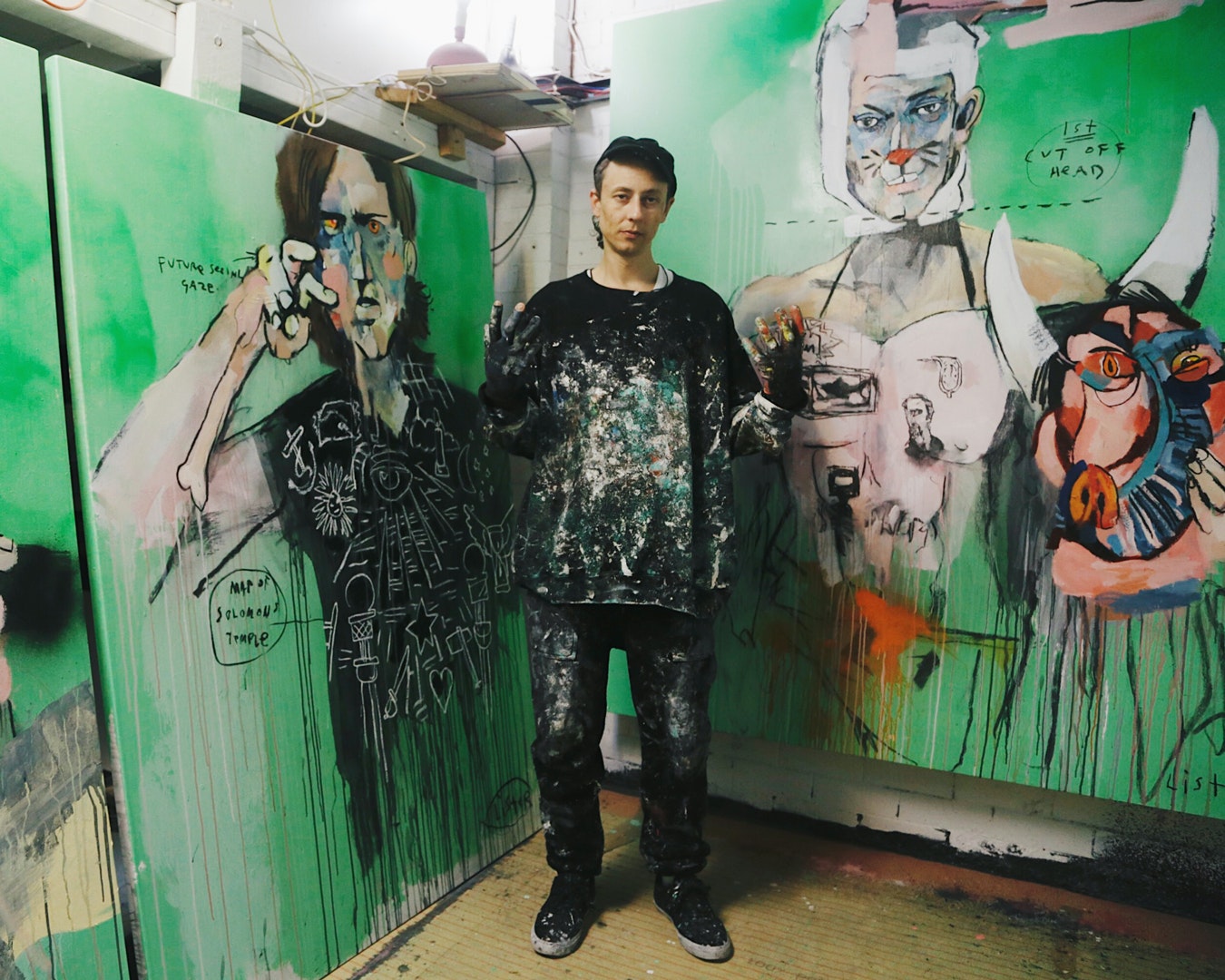 And after ten years, Lister does have something to say. While he’s critical, he’s also hopeful for the future. “I do fight for the freedom of visual speech. I don’t so much as call it art as much as it is a notice board for the community,” he says. “I think if we have a right to vote we should be able to vote every day, and we should be able to write our vote on walls.

"I think Sydney does have momentum for art and there are things that are going on. I see positivity and optimism when I look at the youth—it’s reassuring to know that’s still there.”

CULTURE IS OVER opens in Sydney on Wednesday 17 Jul y and is open to the public until Wednesday 24 July. More details are here.