We Check Out | Tribeca NYC

Tribeca NYC co-owner, Brandon Pollard fondly recalls a tale from his time living in Chicago as a professional baseball player.

One time when competing in Kentucky, his coach took the team to a famed local rib house. Brandon was astounded by what he was tasting—ribs that were incomparable to anything he’d ever encountered before.

He wasted no time heading into the kitchen, where the chef was happy to share his secrets with the then 23-year-old Aussie. It’s a recipe he’s treasured and kept close to his chest until opening Tribeca NYC. Now those same 12-hour slow-cooked smokey sweet BBQ pork ribs feature front and centre on Tribeca NYC’s extensive menu.

“When I see plates full of empty bones being cleared from tables, I know we’ve nailed it,” Brendon emphasises with a fist pump.

Upon opening December 2014, Tribeca NYC introduced Wednesday Rib Nights, with intentions of running the promotion for a few months to give people a taste of their offerings. A year later, they agree it’s a weekly promotion that’s here to stay and there’d be a revolt if they were to withdraw the special. Wednesday nights are booked solid up to three weeks in advance.

Chevron Island’s Tribeca NYC is named after a hip neighbourhood in downtown Manhattan with a world-renowned dining scene and inner-city loft living. It was the first true American dining establishment to open on the Gold Coast. Since then, a string of American-inspired burger bars, diners, and smokehouses have opened along the Coast. There’s no denying we are mad for traditional nosh from the US of A.

We love Tribeca NYC for many reasons, but none more so than the hardworking individuals behind its success. This hip Chevron Island restaurant and bar is owned and operated by brothers, Brandon and Shannon, together with their beautiful Mum, Carolyn. They’re right there to greet you, seat you, recommend dishes off the menu, and to make your cocktails. The boys are salt-of-the-earth types and you can’t help but warm to them, wishing them every success in business.

Brandon had spent years living and breathing American food as a pro baseball player. Brother Shannon previously owned a wholesale alcohol distributor on the GC, Mum Carolyn was an accountant. It’s a functional match made in heaven that’s been a recipe for success for the tight-knit family.

Always intent to improve on their already-popular product, earlier this year they headed to New York on an intensive research trip (tough gig!), over six solid days eating their way across the Big Apple.

It’s an insanely competitive industry, where on one block alone you’ve got both a Top 10 Italian chef and a Top 10 Mexican chef. “You need to be good to survive,” Brandon explained.

Again when approaching owners and chefs with their story of owning an NYC-inspired restaurant in Australia, they were welcomed with open arms from professionals happy share their tips and tricks of the trade.

They found the gluten free and vegetarian movement was booming in New York, just as it is on GC. On returning home, the brothers gave Tribeca NYC’s menu a complete overhaul, adding a whopping 44 new dishes across their breakfast, lunch, and dinner offerings. Plus, now burgers and tacos can be made with lettuce leaf shells to eliminate the gluten and carbs.

While mulling over the impressive menu, we ordered a seasonal speciality peppermint espresso martini to start, and for Mr Metropolist, a frosty Budweiser (to pair with the ribs, of course). It was near impossible to decide from the extensive list, with names paying homage to the motherland like Hell’s Kitchen Hot Wings, Long Island Prawns, Brooklyn Hipster and Bronx Bomber burgers, the Carey Bradshaw Chopped Salad, and the Johnny Lennon Hot Dog. 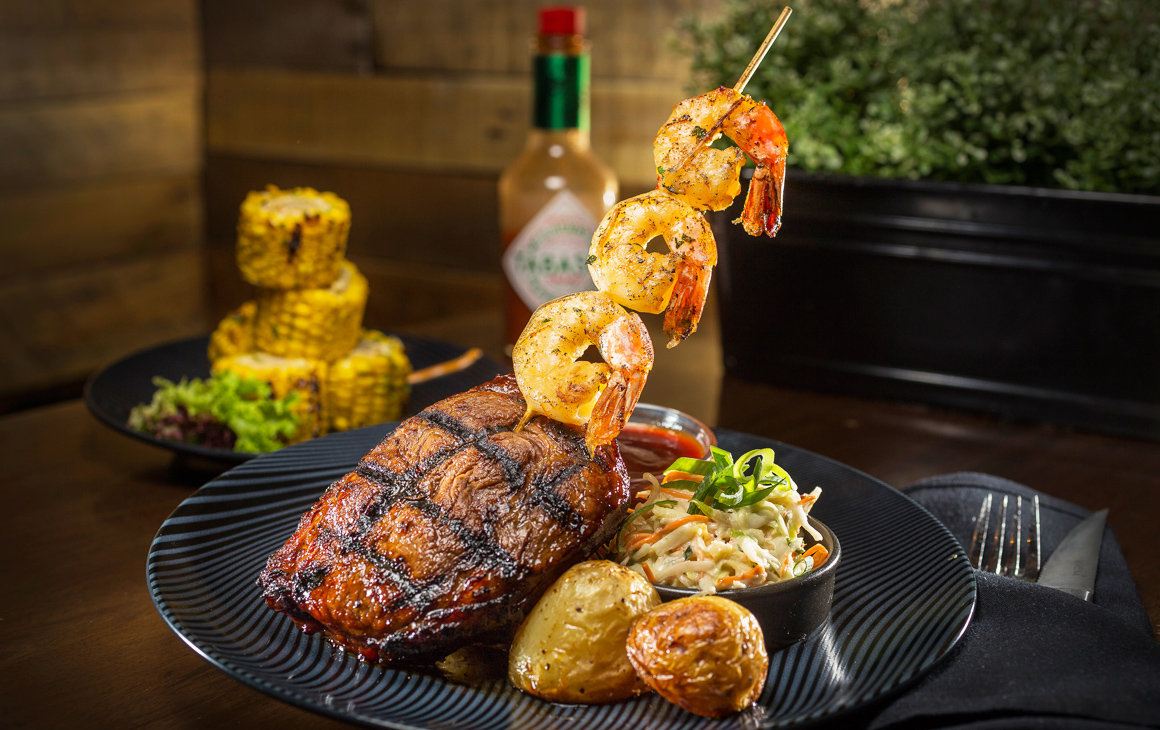 We opted for the Johnny Wang Bang Bang Chicken, served in an oh-so-crisp lettuce shell with fresh sprigs of sprouts and homemade slaw. Followed closely by the Buffalo Mac n Cheese with pulled chicken, hot sauce, and melted through with dreamy mozzarella and blue cheese. It had bite! We worked our way around to the prize winner—melt-off-the-bone pork ribs, smothered in finger-licking sweet hickory BBQ sauce, rosemary, on a bed of fries with a side of fresh house coleslaw. Having shared two starters and one main, I was stuffed.

Tribeca NYC’s menu strongly lends itself to share-style dining, which we totally urge you do, to ensure you can try as many dishes as possible in one sitting. You’ll not be disappointed!

My North America-born and raised dining partner said he felt at home in Tribeca NYC. Priding themselves on authenticity and staying true to American recipes, the guys love this kind of feedback. Like the one from a born and bred New Yorker (having lived in all the five boroughs), who praised their Rueben sandwich—saying they’d absolutely nailed it.

The sleek and sophisticated narrow eatery is atmospheric and mood-lit with wood lining one side and the low ceiling, red-brick walls, leather couches, and high-top tables. ESPN is constantly broadcast across the TVs, with hockey, NFL, NBL, and, given Brandon’s sporting roots, baseball. Earlier this year they hosted an epic all-day party for Super Bowl. “People were hanging from the rafters!” laughed Brandon.

Tribeca NYC is open six days a week for breakfast, lunch and dinner, Tuesday to Sunday (though closed for dinner Tuesdays). Their Happy Hour is also banging, with $5.50 beers and basics, and $11 cocktails between 4:30 – 7:30 pm.

If you haven’t already drooled all over your keyboard, we’re stoked to announce Metropolist has an $80 meal voucher up for grabs—to get your fill of delicious American grub. Enter your details below to be in the running to win!

When Brooke Darling is not travelling to far flung places or sailing around the world, she’s scouring the coast for the best ethnic food, new openings, and hidden gems, all in the name of research for Metropolist. She loves motorbike rides to the hinterland, learning (frustratingly) to surf, and will try any adventure sport at least once. Find her on Instagram @darlingisamrs