It started, like most good things do, with six neighbours sitting ‘round a table...drinking.

“One of our mates, Doug, was running a marathon the next day, and he couldn’t drink” says Stephen Lawrence, co-founder of non-alcoholic spirits label, Brunswick Aces. “And someone just said, ‘Why don’t we make non-alcoholic gin?’ We looked around the table and realised we had all the skills we needed.”

Weirdly, they did. Completely by chance, the founders of Brunswick Aces were the perfect people to start a boutique gin company. There was a chemical engineer, a scientist, a marketing guru, one finance officer, a writer and a chef. If they had magic rings they could fight crime.

“The first step was the equipment and the technical side of things,” says Stephen. “I talked to a few colleagues and we realised distilling gin is a fairly old technique. We use the same equipment, just with some slight modifications. And since we don’t have to purify the alcohol, it’s actually a simpler process.”

Brunswick Aces smells like gin, and it tastes like gin, but it won’t get you sloshed like gin. It’s technically a ‘botanical drink’—the same floral notes, triple distilled, just hold the ethanol. You can nose it in a glass, mix it with tonic or drink it neat. The idea is to provide a frictionless alternative for gin-lovers who (for whatever reason) can’t drink booze. 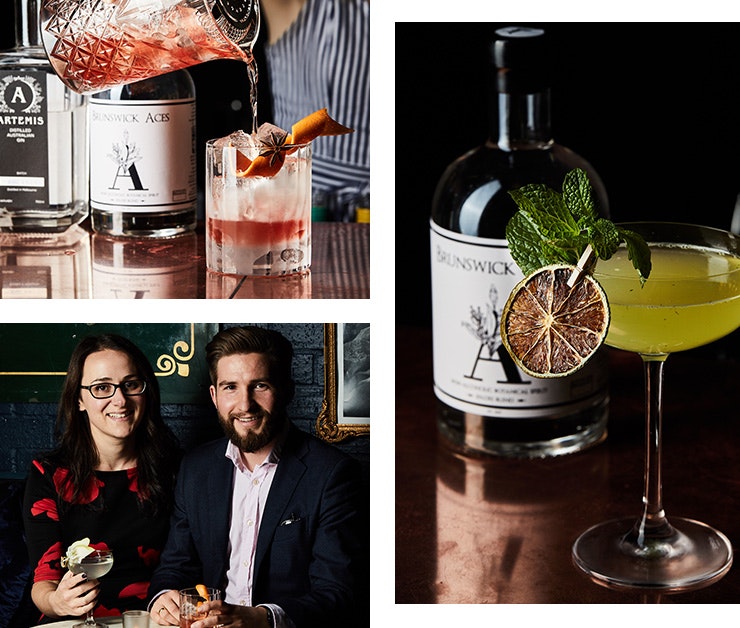 “Twenty four per cent of Aussies don’t drink on any given day,” says Stephen. “Whether it’s driving, or pregnancy, or just a health kick. Some politicians have started drinking it too—they need to socialise but stay sharp.”

There’s a gap in the market, no doubt about it. If you’re a mature adult...and you’re not drinking...and you’re out on the town...what are you going to order? Juice? Coke? It’s not exactly James Bond, is it...

The next step for Brunswick Aces is to get stocked in boutique bottle shops and gin bars around the country. So if a designated driver rocks up and says, “What can you do that isn’t booze?” the bartender can reach for a bottle of Aces instead of cranberry juice. After that? The sky's the limit.

At the moment, the guys have released two varieties: Spades and Hearts (Diamonds and Clubs are just around the corner...) Spades is your classic spring garden citrus gin—distilled with notes of lime, pink grapefruit, cardamom, parsley, lemon myrtle and coriander. If you’re trying Brunswick Aces for the first time, that’s our pick.

Hearts is spicy and warm, with a heavy aniseed twang. The guys distil it from juniper, wattleseed, cassia, cloves, star anise and ginger. Tastes a bit like Christmas.

Both ‘gins’ can be drunk neat or over ice. But a dash of tonic water really gives them some zing (the Brunswick Aces guys favour the CAPI tonics, but you could use any good quality tonic water). The fizz and carbonation surges through the botanicals, turning “Oh yeah that’s actually not bad” to “Do you know what, that’s f*cking amazing!”

We’ll drink to that.

You can get Brunswick Aces at the moment through their online store, or select bottle shops like Decanters By The Bay.