The Pie Shop is one of those rare places you smell before you see. The scent of butter pastry and slow-roasted meat wafts down Nicholson St for twenty paces in either direction, like those cartoon pies that are always getting pinched from windowsills. But if your nose didn’t give it away, the sign above the door offers a subtle clue: ‘HOT PIES!’

This place is Melbourne’s newest pie emporium, a dinky di pastry shop that specialises in homemade Aussie pies, chips and (self-confessed) ‘dirty dimmies’. It was opened by two mates, Matt Wilkinson (chef and owner of next door's Pope Joan) and Steve Rogers (ex-Circa and Movida). They got the idea when Matt asked Steve to bake a few pies for his mates at Warialda Belted Galloways beef farm (the farm that now supplies The Pie Shop). Fair to say the pies turned out pretty bloody good, and a small flour-dusted dream started to bloom in Matt’s mind. A place that honoured the humble pie and used premium ingredients...but still enjoyed the dirty stuff. 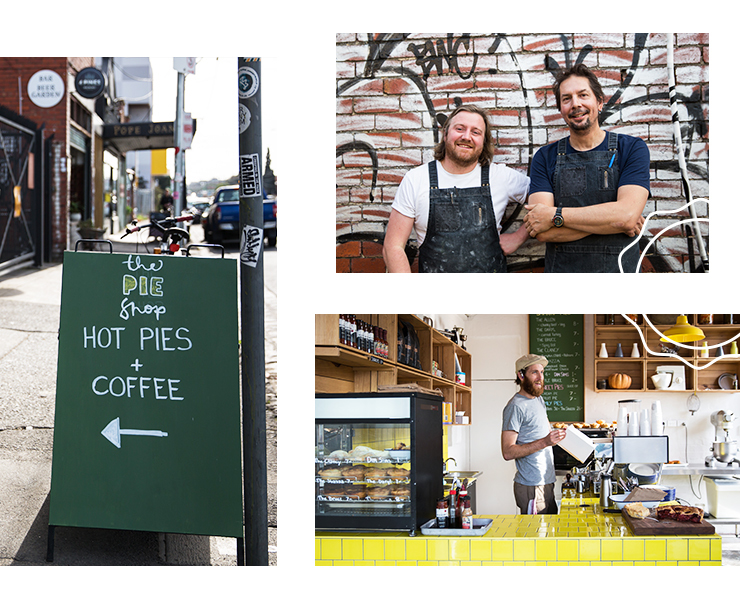 The doors to The Pie Shop opened in May.

“At first I thought we’d be shifting maybe 60 pies a day,” Wilkinson says, flour dusting his node and left ear. “But now it’s more like 150. The response has been mad.”

When we visit there’s a queue of hungry Brunswick East residents milling around the bar, trying to decide between The Bruce (a spag bol pie) and The Shazza (caramelised onion, cauliflower and cheese). Rogers is over in the corner, rolling out golden pastry with a good old-fashioned pin, prepping a couple of larger take-home pies for the fridge. The space is compact and cosy (Wilkinson originally envisioned turning it into a nursery/bar), and the coffee counter is painted a cheery sunshine yellow. Between the colour scheme and the smell wafting from the pie oven, it’s the sort of place that puts a smile on your face before you’ve taken a single bite.

Speaking of bites, these are some seriously good pies. Nothing against Four n’ Twenty, but the trick to a homemade pie (at least in terms of presentation) is imperfection. You actually WANT the knobbly pastry bits, the odd brown-baked stain where a little gravy has bubbled out the edges. They should have...character. Rogers and Wilkinson have got their pastry recipe down pat too: it’s golden, light and flaky. Minimal stodge, with just the right amount of crumb-age. 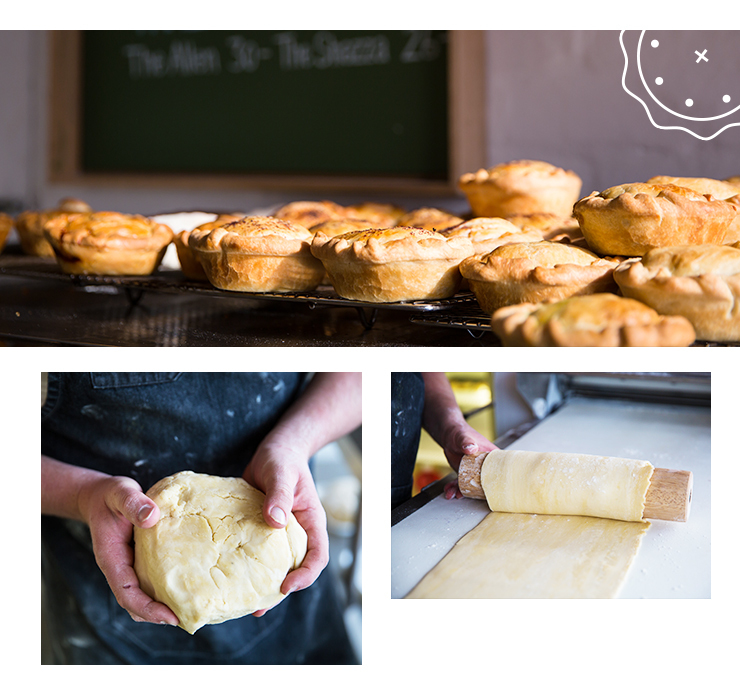 When it comes to fillings, you’ve got a few choices. First the savoury options. For meat lovers, we’d recommend The Allen (a chunky beef and veg combo that tastes like a night in front of the fire) or The Daryl (a surprisingly delicious curried turkey). Good solid food that sticks to your ribs and makes getting out of your chair a challenge. Lighter options include The Clancy (pumpkin, chard and halloumi) or The Shazza, but there may also be a ‘Brenda’ joining the menu soon (the guys are still tinkering with the recipe—think chunky mushrooms, leek and cheese).

The sweet pies are larger. You can grab a slice in-store (served with a shaving dollop of canned whip cream) or order your own to take home. At the moment there are two dessert options, both equally delicious: a Strawberry & Balsamic pie that practically zings off the palate, and an Alphington Rooftop Honey & Buttermilk, which tastes like a giant mouth-hug. You show up at the dinner party with one of these bad boys...instant hero status. 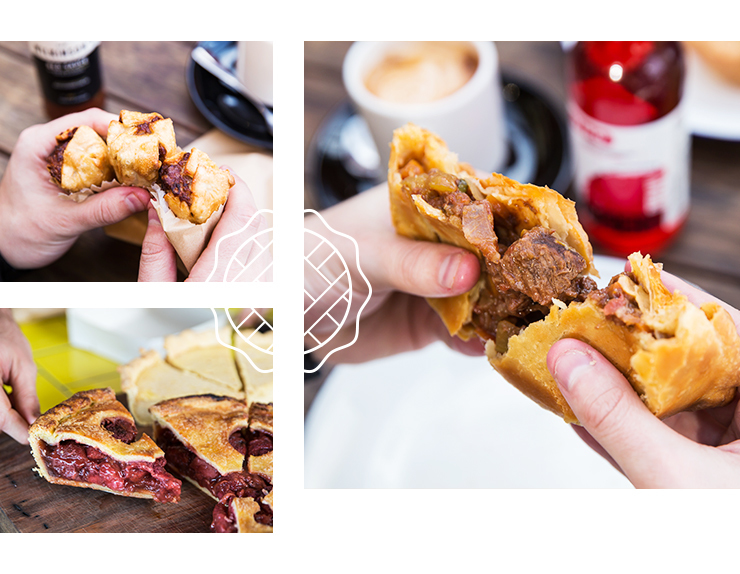 Of course the beauty of pies is that they’re, by nature, an un-fancy food. The idea of a Michelin pie is almost an abomination. They SHOULD be a little cheap and dirty, right? Well Wilkinson and Rogers agree, which is why they’ve chucked hot chips and dimmies on The Pie Shop menu too. Nothing fancy here folks: frozen dimmies just like mama used to buy, fried to golden nuggets, served with a big lug of soy sauce from a plastic bottle. It doesn’t get any more Aussie than that...