And we’re back, watching the show that temporarily sends Twitter into a miniature, worldwide meltdown every Monday night. I’m glaring at the opening credits accusingly, because I still don’t forgive them for Hodor.

Meera, aka girl who travels with Bran, really doesn’t seem like she’s going to last the night at the rate she’s going. Someone is either going to have to a) miraculously turn up or b) miraculously distract the White Walkers given that she can’t just sacrifice herself for Bran. 'Cause he can’t run away. If you didn’t get that.

It’s option A. I do hope there’s a few more of these ass-kicking horsemen coming, because although he seems to know how to deal with the White Walkers, he doesn’t seem to be fighting them off very efficiently. Horseman pulls Bran up onto his horse with one arm. He obviously lifts.

We cut to Samwell, who I had temporarily (intentionally) forgotten. Turns out he’s rich, like so rich that he’s pretty much the GoT version of Prince William.

In this next scene, Margaery looks significantly healthier or like she’s actually had the chance to shower. I’m not sure if she’s playing Tommen and the High Sparrow. Her language seems a little too hyperbolically religious to be legit, no one talks like that right? She says that her brother needs to atone for his sins, so she’s definitely 100% playing everyone.

We cut to another awkward dinner party, curtsey of the Game of Thrones producers. Sam’s father is clearly going to be a douche—just look at this face. 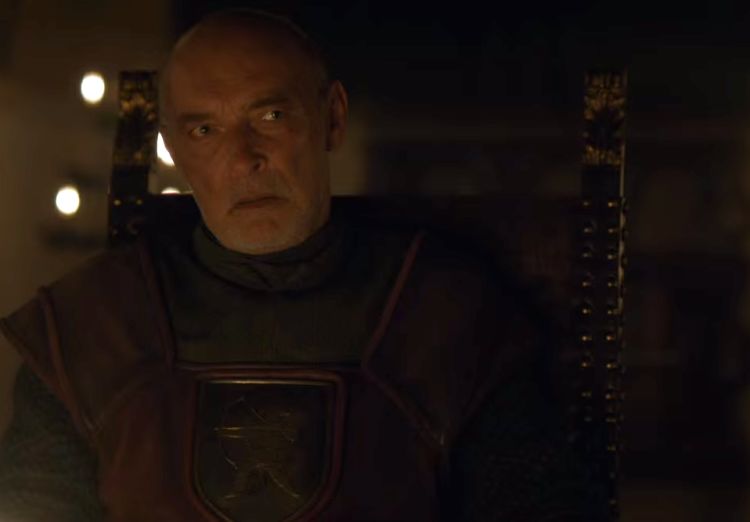 Said father totally fat-shames Sam. Instantly turns the entire world against him. We spend entire minutes listening to this douchebag spurt douchebaggery and it’s stressful for everyone.

The baby looks cosy in its orange fur, and Sam changes his mind despite the fact that it’s definitely the safest place for them to be.

We cut to Arya, who is laughing at the play that no one else is laughing at. Staph laughing girl. Arya’s next potential job is a writer or actor, apparently. It’s an interesting career move given her current job.

OMG HER TARGET IS GONNA DRINK THE POISON. Ok Lady Crane didn’t drink it. OH SHE’S GOING TO DRINK IT—no wait, Arya’s conscious is too strong. Arya has effed up and she knows it, so I expect everything should be a-ok. There’s a disgusting close up of skin being peeled off and turned into a mask. Is that new or have I missed something?

The other chick, Waif, that has always hated Arya is keen as a bumblebee for killing. Idk when she decided to hate on Arya so hard.

Jamie is as impressed by Mace Tyrell’s speech as I am by his helmet's feathers. He looks like a plump peacock. It looks like there’s going to be some serious bloodshed between the Lannister’s army and the Sparrows, but then nothing happens. I’m confused, is Margerey not playing everyone? My poor brain.

Walder Frey is back in all his revolting glory. I don’t think anything else needs to be said on that issue.

Cersei finally confirms what every GoT viewer knew from the start – that her personal soldier is The Mountain. Cersei and Jamie make out, which hasn’t happened in last couple of seasons, and it's as gross as it was in season one.

We cut back to North of the Wall and WHY IS THIS GUY KEEPING THE RABBIT’S BLOOD IN A CUP? I’M WATCHING THIS BEFORE DINNER CAN YOU NOT. Bran’s uncle is back, somehow and oh hell to the no, Bran is drinking the rabbit blood. I’m out.

Meanwhile in Essos, Daenerys seemingly has reclaimed control over her dragon (which btw has gotten pretty big). She seems fairly equipped to sail ships to Westeros, besides her lack of ships, of course. There won’t be any influx of “hold the door” memes this week, but a solid episode all ‘round.