"Whiskey, like a beautiful woman, demands appreciation. You gaze first, then it's time to drink." - Haruki Murakami.

You said it Haruki, there's something entirely sensual about indulging in a whisk(e)y*. There's something about that golden amber drop that looks like it's meant for special occasions, or knocking back in a speakeasy with a vested, moustachioed bartender who insists on playing The Doors on vinyl. The throat warming, belly hugging sensation after the first sip, the famous songs, books and relationships it's inspired over the years, the fact that Mark Twain and Charles Bukowski drank it, and the rumour Lady Gaga can't write a song without it, all add to its mythical, thought nourishing reputation.

Regardless of whether you're drinking it for pleasure, or you need some liquid confidence to help you pull off that meat dress you're hiding in the cupboard, there's one thing we can all agree on – there are some great places to drink it in Melbourne. And we found them.

*For the sake of consistency, let's go with whiskey.

EAU DE VIE
Eau de Vie, the intimate, mood-lit speakeasy is the perfect setting for a night looking broody and deep, whiskey in hand. Their extensive list of malts will have your tastebuds tingling, so it's worth trawling the laneways for the elusive (and aptly named) Malthouse Lane. The Orient features Johnnie Walker Gold with lemon juice, fig, smoked apricot and cardamom, finished with a slash of Talisker, while spice lovers will love the bite of the No Sleep Til Brooklyn – Bulleit Rye whiskey, Antica Formula, Cynar, Punt e Mas & Maraschino.

Though whiskey is a speciality, the expert bartenders will whip you up any cocktail you please, as well as indulging you in the history of your drink of choice. Good chat, great drinks – Eau de Vie.

WHISKY & ALEMENT
It's going to be good if it's got whisky in its name, period. With over 500 golden bottles peeking at you seductively from behind the bar, there's a good chance that if you didn't like the golden nectar prior to your visit, you'll leave a changed person, or at the very least, happily tipsy. The staff have a knowledge of the drink that would rival any Winston Churchill enthusiast worth his salt, so try one of their famous beer and whisky matchings, book yourself into a private tasting, attend their prestigious whisky school, and top it all off with a scrumptious cheese platter. Life, complete.

THE WOODS OF WINDSOR
The Woods of Windsor's whiskey – say that ten times fast. Drinking here is like drinking in the middle of a movie set, and what better way to feel good and famous about yourself than with a whiskey, a cigar, and a room full of tasteful taxidermy? Someone call Clooney, stat. There's half a century's worth of whiskey here, so make sure you enquire as to the one that'll suit your palate, and make sure you do the right thing and pair it with something from the delicious menu. Leave the nonsense at home, this is up-market sipping in all its finery.

The Woods of Windsor | 108 Chapel Street in Prahran 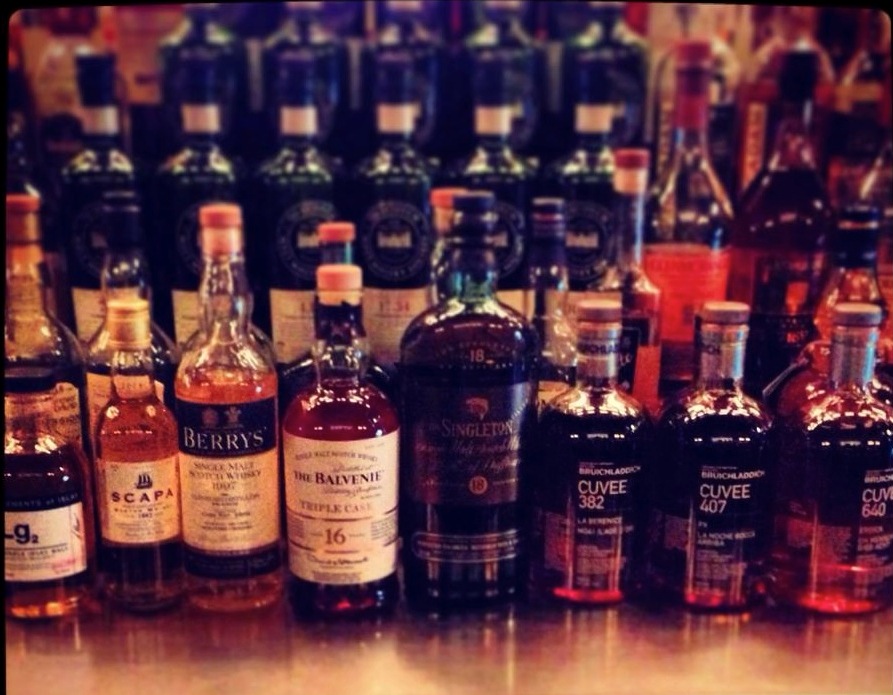 BARONOWS LOUNGE
Those who love the smell of worn leather and rich mahogany will feel right at home in Baronows' smoky den of whiskey and cigars. This is not for those who fear smoke, as patrons are asked to sign a waiver allowing them to light up on the inside; but for those who like to indulge in the chewy Cuban now and then, rejoice. There are hundreds and hundreds of whiskeys on offer here, as well as a meticulously crafted list of wines for those who need to balance it out a bit. With a distinct gentleman's club feel, the fellas outnumber the ladies here. So if you fancy a sophisticated gent, you might want to hotfoot it to Hawthorn.

BILL'S BAR
Those who fear they can't pull off the Ron Burgundy persona that whiskey often connotes might be happiest with a Huxtaburger, followed by some tough liquor at Bill's Bar on Smith Street (enter via the burger joint). This jazzy speakeasy is all at once candle lit decadence, and a place to get absolutely riotous. If not in the mood for a wagyu pattie (there's something wrong with you, first of all), there's a bar bites menu that's worth a peek at, but it's the whiskey, tequila and various forms of poison that will make sure you're seated in those leathery booths come closing hour. Bill Cosby (America's best Dad and inspiration for the bar itself) would expect nothing less.

KELVIN BAR
Intimate and covered in personal paraphernalia, Kelvin Bar is the bar for a regular whiskey drinker. There's seating for all sorts here, with comfy couches, armchairs and lonely barstools, so you can grab one of their board games and scream over missing out on Mayfair, or huddle in a booth with your partner, musing about the workings of the world together. There are three pages of whiskey to work your way through, so expect many an evening spent at Kelvin Bar.

HEIRLOOM
If there's one thing the Japanese do well, it's hard liquor. Boasting the largest selection of Japanese whiskeyss in Melbourne, Heirloom is more of a fully functioning restaurant than bar, with sashimi and karaage chicken on the cards, but what better thing to wash it down with than a white oak? With a great selection of saké, craft beer and delicious Japanese drops of wine, come here for a fancy business lunch, or perhaps a birthday you won't forget quickly. Or maybe you will forget it, if you enjoy the whiskeys like you should.