Jon Freeman is one half of the crime fighting/coffee brewing duo behind the famous CBD hole-in-the-wall café, Cup of Truth, and the recently–opened Pardon in Prahran. He takes a couple of minutes with TUL to talk about the job he loves, the city he calls home, and what's next in store for these superstars.

TUL: So where did your love for coffee start?
Well, I started in Melbourne at Starbucks, but I wouldn't say that was where I fell in love with coffee. After a few months there, I started at Vue De Monde. Basically it was so different – coffee is one of the main focusses of the café.

TUL: What was the most important thing you learnt there?
I learnt so much about consistency and the quality of the product you were selling. It was such a wakeup call for me and the best business training I could've had. It was also where I met my partner in crime, Courtney (Joel).

TUL: When was it that you decided you wanted to have your own café?
I decided I wanted to open my own place about four years ago. I actually came into Cup of Truth because Courtney's partner had decided to leave. Courtney and I have always had the same goals about owning a certain style of café, that's shown with Cup of Truth.

TUL: And what is your style of café?
What we like to do is have a café where there's just the option of ordering a coffee. Sometimes people go into cafés and feel the pressure of ordering from the menu, and feel they're not looked after properly if they don't order food. We look after them.

TUL: What are you brewing?
We've always used beans from Axil Coffee Roasters – they look after us.

TUL: How's the reception been for your new café Pardon (Prahran), compared to Cup of Truth (CBD)?
Really great. It's such a welcoming community here. Everyone really looks after one another.

TUL: Big differences?
The rushes. Cup of Truth is four hours of power in the morning. Here it's consistent. And we have a nice big people–watching window. Though we do get a huge 3pm cake rush.

TUL: They look amazing! Where are the cakes from?

Matt Forbes. He's the ex pastry chef from Vue De Monde, which is where we know him from. We didn't think twice about getting the cakes in from him; we knew the quality was going to be incredible. (Read our Two Minutes with Matt here, or click for his French Toast recipe!)

TUL: What's the most popular?
Probably the chocolate salted caramel and cardamom oreo. Or the cinnamon toffee ball. (TUL Note: We've tried both, and can confirm they make life worth living).

TUL: Yum! And they're at Cup of Truth as well.
They certainly are.

TUL: What's would you be doing if you weren't in hospitality?
This has always been it for me. Always up for a chat, shooting the breeze, yeah, just serving people. Probably a butler!

TUL: Where's your favourite place for a knock-off drink at the moment?
Definitely Ladro on Greville Street.

TUL: And your favourite place for a bite?
Anywhere with dumplings. They're my heroin.

TUL: If you could have anyone serve you a cup of coffee, anywhere, who and where would it be?
Oh my god! Probably Courtney. He's always making me coffee, but never serving it. He is Australia's best barista after all – it comes with a responsibility.

TUL: So what's next?
Bigger café. Restaurant. Want a kitchen. Mine and Courtney's background is in alcohol, that was originally our passion so probably getting into wine as well.

TUL: How so?
I'm a big fan of all of the boutique wineries and micro-breweries popping up all over the place. I don't want to get involved in anything extreme, but it'd be great to start working with a few of the ones Courtney and I both really enjoy, and get them involved in something new with food matching in a restaurant.

TUL: Wine over coffee?
But coffee will always be there. Two passions – coffee and alcohol. I make a mean espresso martini! 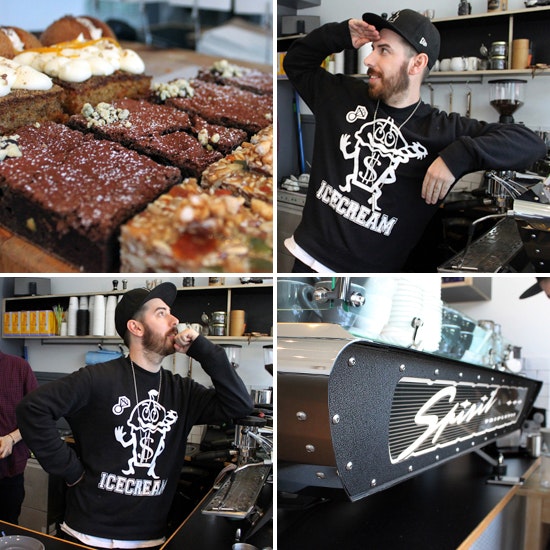 Want to know more about Cup of Truth? Then check out our round up of the CBD's best takeaway coffee!