Tuck Into Auckland’s Best Pies At These Mouth-Watering Joints

As Kiwis, a love of pies is practically in our DNA. These hearty pastries have been keeping us fuelled for generations and are the perfect meal for lunch, dinner, or even a cheeky brekkie. But not all pies are created equal, so we've put together a list—in no particular order—of Auckland's absolute best to help you sort your pies, from your pie nots. Let the munching begin.

We thoroughly recommend making the trip out west for one of The Pie Shop's incredible homemade pies (unless of course you're a local—you lucky thing). Look for the bright red building toward the end of the main shopping strip, and prepare to have your taste buds well and truly blown. These bad boys are some of the biggest on this list, filled to the perfectly-crimped brim with delicious, top-quality ingredients. The Bella is our current go-to (a show-stopping combo of free-range roasted chicken in a buttery lemon, parsley and parmesan sauce) but rest assured that anything you order here is going to be beyond good. We also love how you can watch the staff prepare these mouthwatering creations, while enjoying one of your own from the comfort of their cosy booths.

The Mustard Kitchen has little in common with the lunchbar that was once in its place—except for pies, that is. To say their version is a step-up from that of their predeccessors', however, would be a gross understatement. These homemade goodies are some of the best in Auckland, and have been drawing locals—and out-of-towners—to the café's Morningside site for several years now. And with timeless flavours like steak and mushroom sitting alongside more modern options (a little bird told us they once did a French toast pie with bacon, banana, egg and maple)—all packaged inside a buttery, shorter-than-usual crust—we can totally see why. 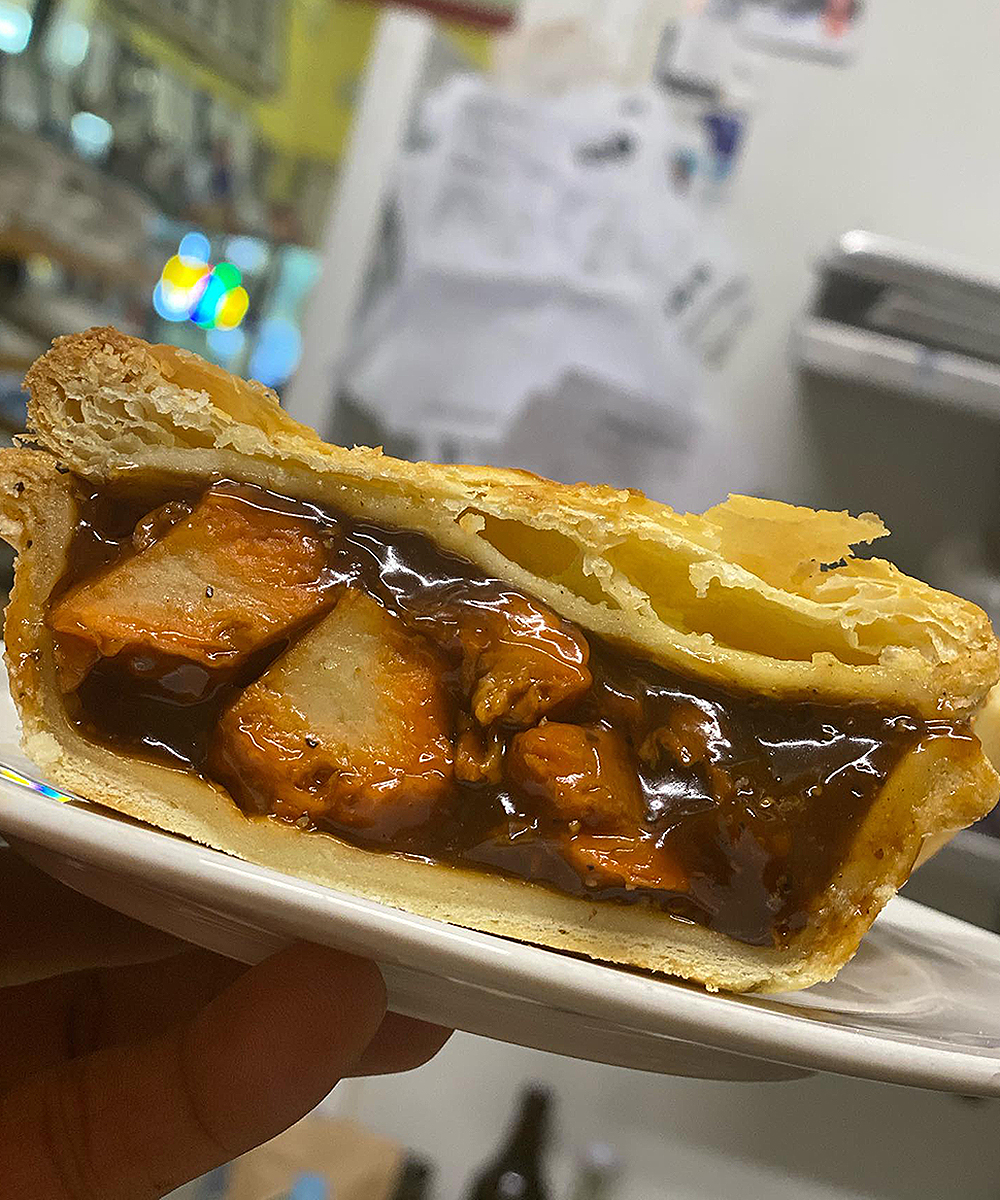 Ellerslie peeps, consider yourselves blessed—because when it comes to pies, Jason Hay of Richoux Patisserie is a legit god. He's responsible for cranking out some of Auckland's best, and has the awards to prove it. Jason is especially good at coming up with novelty flavour combinations that are guaranteed to impress even the most seasoned pie fan—we're talking chicken, cranberry and camembert—cheeseburger—and even butter chicken, without the chicken (for our vegan friends, naturally). However if you prefer to keep things simple, don't worry—Jason also knows how to make a mean mince and cheese.

As one of Auckland's top restaurants, it's only fitting that Cazador would also be responsible for some of its best pies. Look for them in their dedicated delicatessen—located right next door to the main eatery—and prepare to have your mind well and truly blown. Case in point: their suped-up version of mince and cheese, which pairs juicy wagyu beef with creamy béchamel sauce. However if you wish to partake of this deliciousness, be warned—these bad boys regularly sell out before 1:30pm. 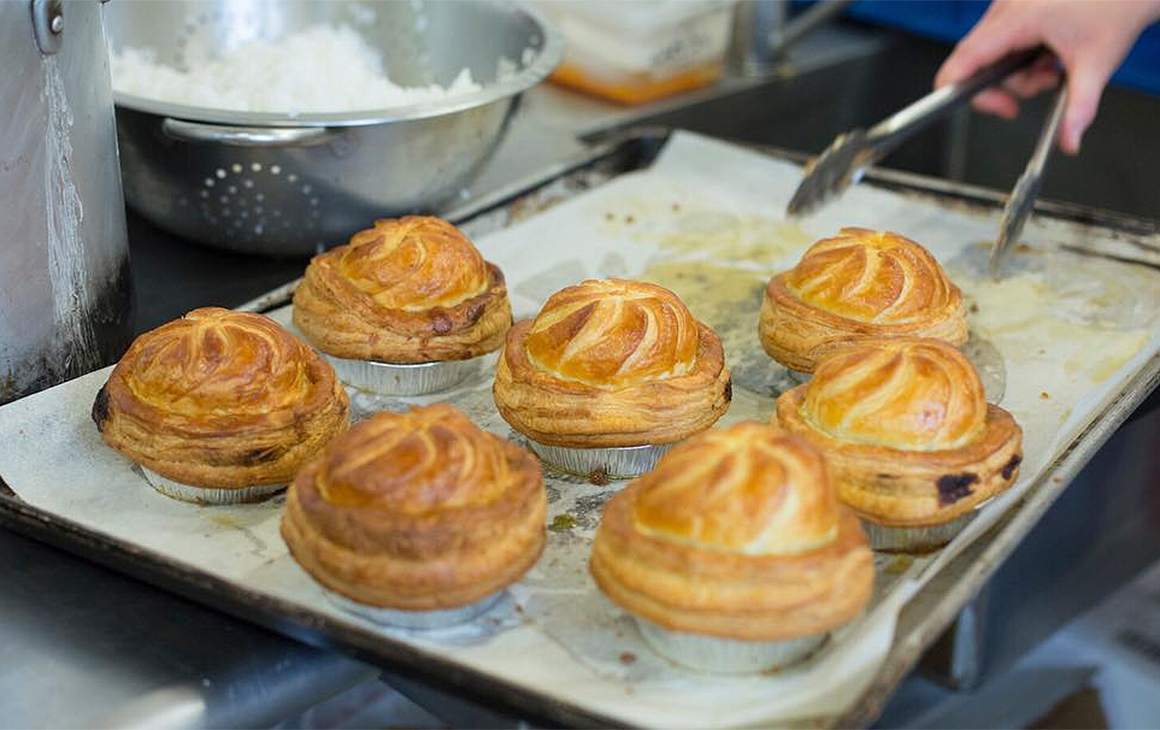 You're no doubt well-acquainted with Little & Friday's mouthwatering sweets, but did you also know that they make a mean pie? Combining handmade flaky pastry with free-range meat and organic produce, these are like the kind of pies your Grandma would bake—only on steroids (just look at the size of that lid!). They even come in individual foil cups, which is exactly the type of extra detail we love. Our fave flavour here has to be the mince and cheese, though the chicken and leek ain't a bad second choice by any stretch of the imagination. Unfortunately Little & Friday's Belmont store has now closed, so you'll need to hit up their Newmarket or Ponsonby digs for your future pie fix.

Give us Lord our daily bread... erm, we mean pie. Especially if it comes from the kitchen of this much-loved bakery, which has not one but three branches across Auckland. Run by the duo behind award-winning restaurant, Orphan's Kitchen—along with a 22nd-generation German baker (say what?)—it should come as no surprise that the pies here are some of the best in the biz. And with flavours like bolognese and mozzarella, curried kumara, and mint and mutton, you'll be wanting to make a pilgrimage to one of their stores, stat. 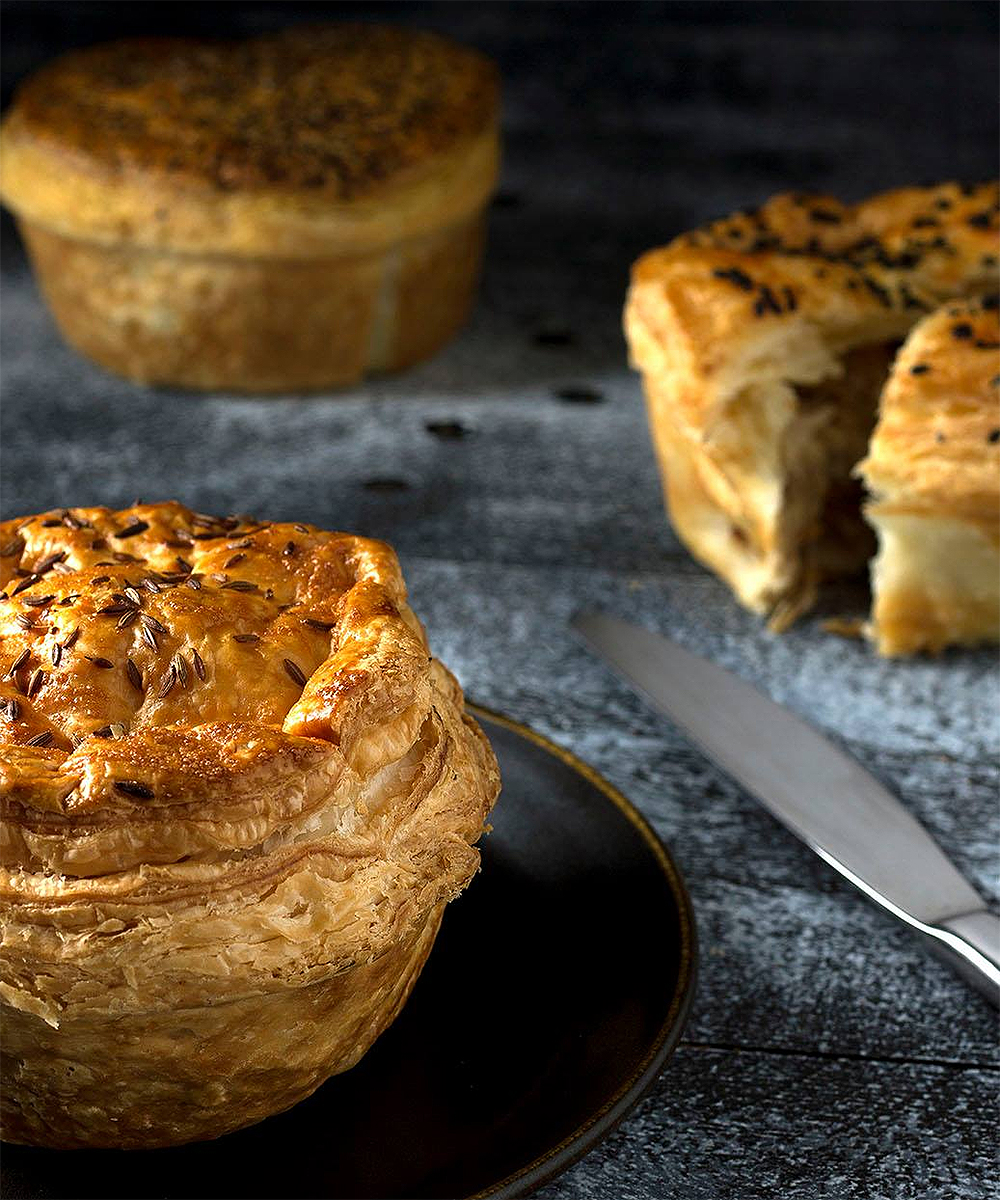 Scratch Bakers supply their goods to some of Auckland's top cafés, so you know that when you get a pie here, it's going to be something spesh. It's hard to go past the pork belly (the only thing better than pork belly itself), however they've also been known to sling some rather delish lamb and chorizo, butternut and feta, and cheddar, chicken, white wine and leek options. On second thoughts, we'd best take one of each.

This one's for all the vegans out there—and the non-vegans, as it turns out. The very notion of a vegan pie is a mind-blow (we take our hat off to anyone who can make pastry without real butter), but don't expect Tart to rest on this laurel alone. Their fillings are just as impressive, with flavours like mac and 'cheese', beany Mexican and creamy mushroom regularly doing the rounds. Yip, if we can say one thing here, it's this—don't let the term 'vegan' deter you, because these pies give the real deal a damn good run for their money. 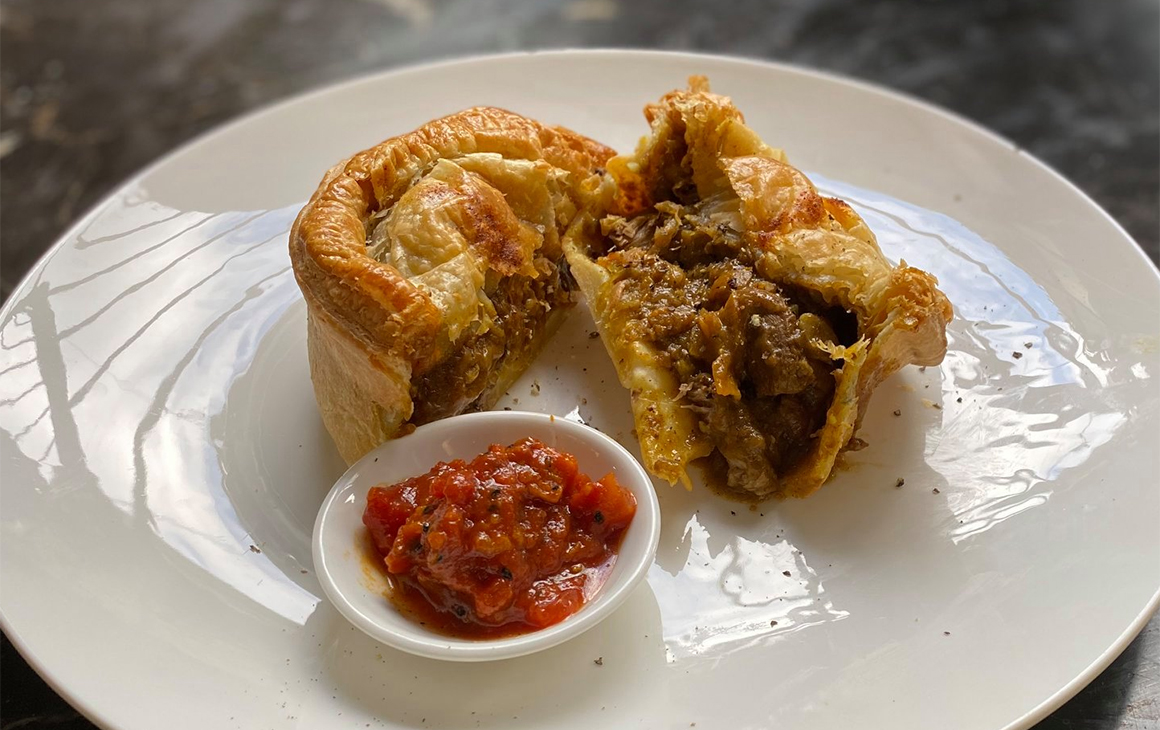 Foxtrot Parlour can (and have) made pies out of just about every flavour imaginable, from Thai chicken curry to Moroccan lamb tagine and everything in between. However if you're looking for your new fave, may we suggest the beef and stilton (a rather nice introduction to eating blue cheese). And the good news doesn't stop there—you can now enjoy this deliciousness without even leaving the house, thanks to their new delivery service (select suburbs only).

The Store is one of those eateries that can't put a foot wrong, and that's especially true of their cabinet selection—which, you guessed it, includes some pretty epic pies. Be it smoked fish, bechamel and fennel, or another wagyu beef take on mince and cheese, there's a slice of pie here with your name on it (quite possibly more). 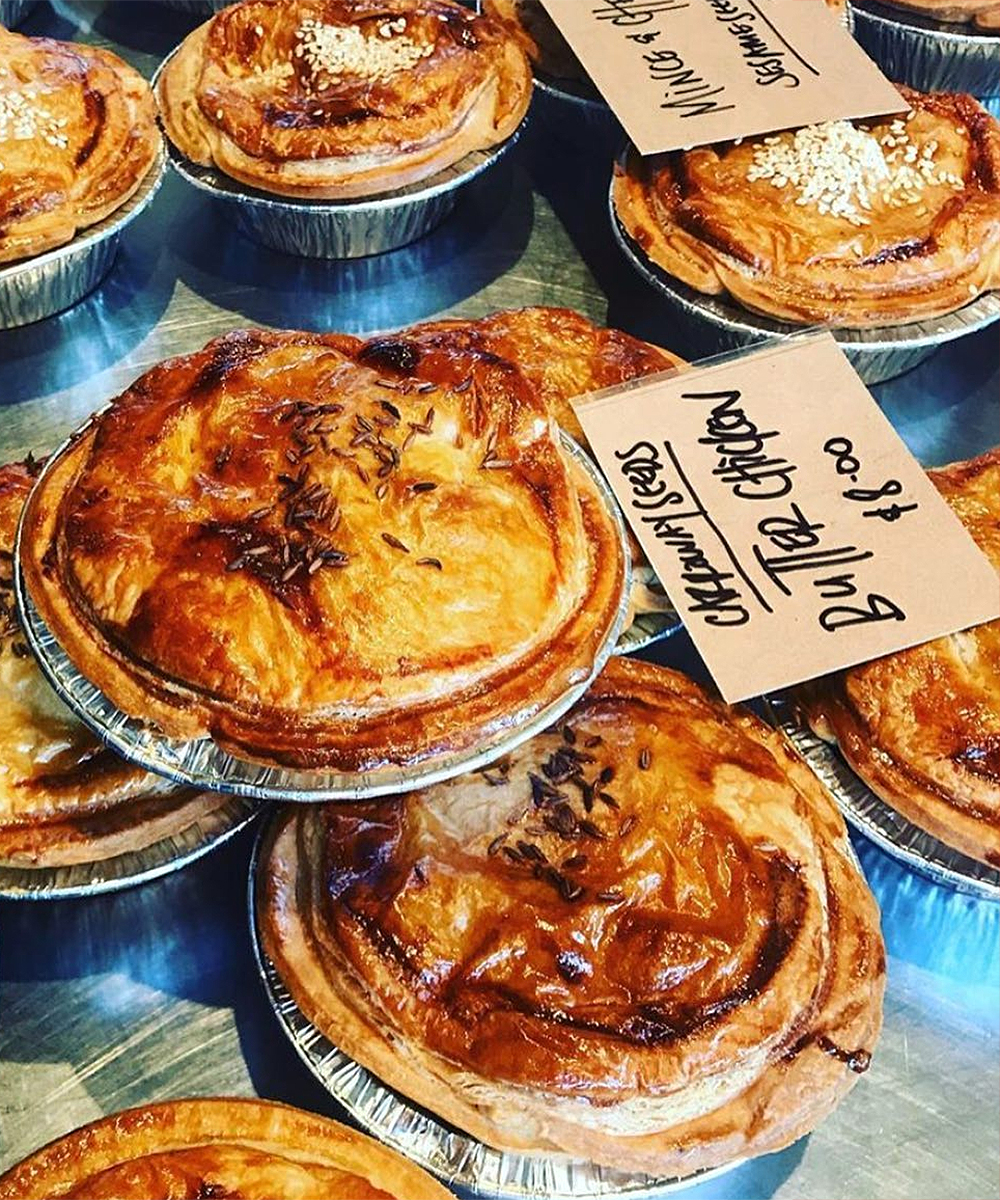 For pies that pack a real bang for their buck, you can't beat Ripe Deli. These guys have some of the tastiest pastries in Auckland and the best bit is, you can get them on both sides of the bridge. So what's their secret, you ask? Classic flavours, done with finesse. The beef brisket and smoked fish are always a good time, but where we reckon the party is really at is with the mince and cheese (because if you couldn't already tell, we're big fans). This baby mixes things up with with not one but two types of cheese (Swiss and Gruyère), sitting atop a bed of succulent free-range mince. Get it in ya.

Finally, what kind of article would this be if we didn't mention the institution that is Muzza's? Their pies are the stuff of local legend (and the cure for many a hangover), which you can again watch their talented bakers whipping up behind the counter. All the classic flavours are here, as well as a rather moreish selection of sweet ones (simply too good not to mention).

Fancy rounding things off with something sweet? Here's where to devour Auckland's best doughnuts.