The Best Camping Spots On The Sunshine Coast

Some may complain about camping, and to them we say move on with your whinging and let those who actually ENJOY sleeping to the sounds of cicadas, waking up at 5.30am with the first light, and strategically manoeuvring through the tiny unzipped gap in the mosquito net at night, read on.

Basically, here at Metropolist HQ, we’re a camping bunch. And with so many places to explore across the region, we’ve narrowed it down to those that fit the season, and have found the best summer camping spots on the Sunshine Coast.

So renting a house on the beach with your mates is just so ridiculously expensive that it just ain’t going to happen. At least not this year! Well, depending on who you ask and what their level of camping is (hard-core or luxury?), Inskip is the better/next best option anyhow. And you don’t need a four-wheeler, so unlike Teewah, nobody’ll be excluded based on the car they drive. And that we like! With plenty of beachfront campsites to choose between, this place is popular, so make sure you book in advance!

We want to be your friend. Because you have a four-wheel-drive. Which means cruising up the coast along the sand is a reality for you. It also means Teewah can be your beach. Don’t know how good you’ve got it, ‘cause you haven’t camped there yet? Let’s paint you a picture. You’ll wake up in the morning, literally having slept ON the beach the night before, and you’ll sleepily walk across the sand until you reach the water. You’ll dive in, as the sun rises, and you’ll realised how #blessed you are. When night comes, you’ll sit around a make-shift campfire with the wood you brought from home, and sip on beer with a water chaser, ‘cause you’re pretty bent on staying hydrated.

Alright, so it’s not like Dicky Beach camp ground is in the wilderness. To be frank, it’s in the middle of a suburb in bustling Caloundra and directly across the road from the local shops. BUT, that doesn’t mean it isn’t special. And if you’re a hinterland inhabitor then this could be the perfect base for a short-term sea change.

Like Dicky Beach, Mooloolaba Beach Holiday Park is in the centre of town which makes it an awesome option for those who are just starting to dip their toes in the camping waters, and aren’t ready to survive without electricity, a supermarket, or tonnes of dinner possibilities. Seriously! You won’t have to plan a weekend menu before you pack the car for this trip, with handfuls of the best restaurants in Mooloolaba just a short stroll away. Our picks? Spice Bar for a little luxury when you’re sleeping on the ground or Gainsbourg—innovative dishes that are super tasty! 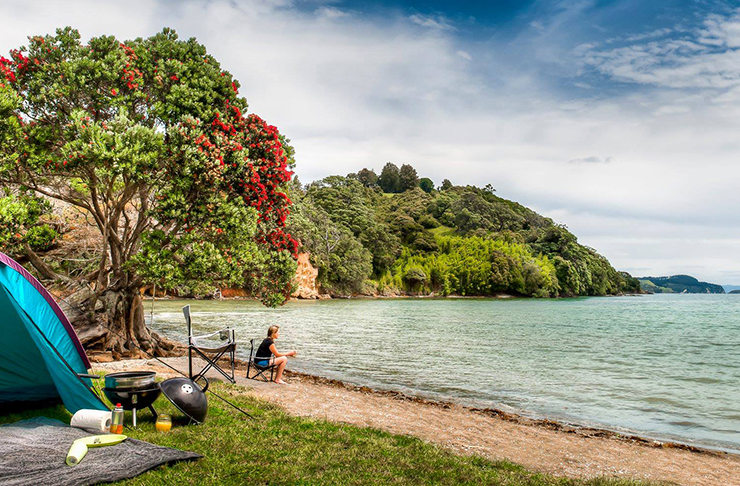 Alrighty, so this super secluded spot takes a little bit of work to get to, but that’s what makes it one of the best camping spots on the Sunshine Coast. It also means that you’ll shake off any non-serious campers, who don’t want to work up a sweat finding and then setting up camp. There’s a few ways you can get to these campsites but our tried and tested option is hiring a canoe (it’ll fit your tent, Esky, and anything else you may need) from Elanda Point and paddling across Lake Cootharaba and up the Everglades to campsite 3’s cute dock. It’s about a 19-kilometre paddle each way and the lake passing is tough, but when you experience the beauty of this untouched paradise, you won’t give a damn.

Get away from the coast, and retreat to the bush where waterfalls, creeks, rock pools, and cascades become your cooling-off options. Booloumba Creek is tucked in the Conondale National Park, campsites one to three contain grassy sites perfect for pitching a tent. Camping in the rainforest, there’s not much in the way of facilities so remember to bring drinking water, bags to take your trash away, and insect repellent. Do not forget insect repellent.

If camping on an island is your idea of the ultimate outdoor holiday, then hop a barge to Fraser Island and take your pick from a smorgasbord of camp grounds—we’re talking 28, if you need specifics. Depending on how you want to spend your down time, there are sites more suited to boaties (Garry’s Anchorage, Ungowa, and Waddy Point beachfront camping area), those looking for a remote experience (Coongal Creek or Moon Point) and those who are with child and need to spend nights at a dingo-fenced site (Dundubara and Central Station). Make sure to book and secure your permit before heading off!

Love to glamp? We've got The Best Glamping Spots On And Around The Sunshine Coast for you. We've also got 7 Awesome Camping Spots Worth Driving South For.