The Captain’s Daughter Has Dropped Anchor In Peregian Beach

The long-awaited Captain’s Daughter has dropped anchor and opened its doors in Peregian Beach and here’s why you’ll be sinking beers and feasting on seafood in the sunshine at this joint.

Taking over the premises from now-gone Wahoo Seafoods, The Captain’s Daughter sits in an entirely revamped setting overlooking the village square.

It’s a prime position, for a prime venture by three locals who made it their mission to see that takeaway fish and chips didn’t disappear from Peregian Beach for good. But their dream didn’t end there. 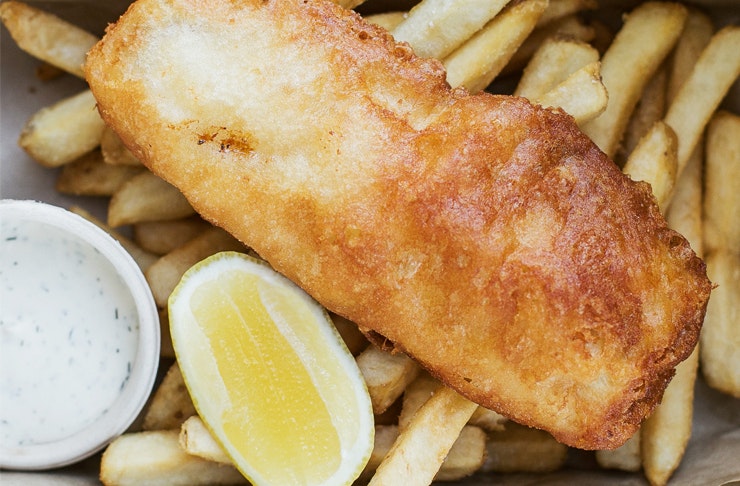 Owners Sam, Tony and Gav have created a two-in-one business, meshing a takeaway area that’s serving seafood to the masses, with a licensed bar and tapas-style eatery. And it’s awesome.

Undergoing a complete refurbishment, it’s almost difficult to remember what the space looked like before its transformation.

Starting off on the right foot, The Captain’s Daughter is an eye-catcher from the street, with a sleek black exterior and a beer garden threaded with festoon lights.

On the inside, it’s all about a sexy, six-metre long turquoise and gold bar; home to beer on tap, a brass mirrored drinks display filled with liquor, and a smattering of sea-inspired curios.

The sea memo continues to the menus. Order from the takeaway section, and you’ll choose between fish and chips, plus a range of tasty snacks like South Melbourne Market dim sims and housemade potato scallops.

Or, if time is aplenty, pull up a stool in the beer garden and wile away the afternoon in the sunshine, sipping on cocktails and working your way through the bar menu.

Broken into two parts, there’s a range of light tapas dishes—think: fish tacos, Thai fish cakes and tempura king prawns—and a hefty hit list of lavish burgers, including The Captain’s Booty Burger featuring a toasted charcoal bun loaded with a beef pattie, maple syrup pineapple, cheese, bacon, salad and a smoked chipotle aioli. And yes, it is as good as it sounds.

The Captain’s Daughter is now open seven days, 11.30am until late. So if you’ve got a hankering for seafood, cocktails, good vibes, or all of the above, drop in and say hello.