11 Epic New Restaurant Openings To Try In Sydney This Month

Hope you're hungry, Sydney—because April has delivered a very long list of new eats and treats.

Top of our hitlist this month is Re, a radical new bar concept from Matt Whiley that's pushing the envelope for sustainability and zero waste. Then, you'll find us sipping mezcal Negronis in the Hacienda-style courtyard at Double Bay newbie Sinaloa, or tucking into the breakfast ravioli at Grana in the exciting new Hinchcliff House project. We'll also be charging up at Maybe Sammy's new city espresso bar, and winding down with a martini backgrounded by a tinkling piano at Beckett's.

Ready? Here are the best new restaurant and bar openings in Sydney this month.

A four-storey Italian-inspired mega restaurant housed within a harbourside heritage building is precisely the sort of pasta-heavy news we like to hear. Opening Tuesday 13 April, Hinchcliff House has popped up in one of Sydney's last remaining wool stores. Led by legendary New Zealand restauranteur Scott Brown and House Made Hospitality, it's a four-venues-in-one type affair, with the ground floor opening first, and the remaining three due to swing open their doors later in April and May.

Grana on the ground floor is both a bakery and an all-day diner serving breakfast, lunch, and dinner. The name translates to "grain" in Italian, and is a reference to the on-site mill which is used to create Grana's pastries and pasta. Highlights at breakfast time are a blue swimmer crab omelette and a breakfast ravioli with sweet potato, egg yolk, and brown butter (swoon). For lunch and dinner, let the 00 flour milled and aged in-house do the talking: like a ricotta and pumpkin occhi pasta with pickled pumpkin and lemon balm, or the malfadine pasta with 'nduja, goats curd, salami, and cime di rapa.

Still to open at Hinchcliff House is Lana, a lively restaurant with a share plate focus, a basement cocktail bar inspired by The Godfather called Apollonia, and a top-floor events space for hire.

Grana is open for dine in Monday through Saturday from 6.30am - 11pm. 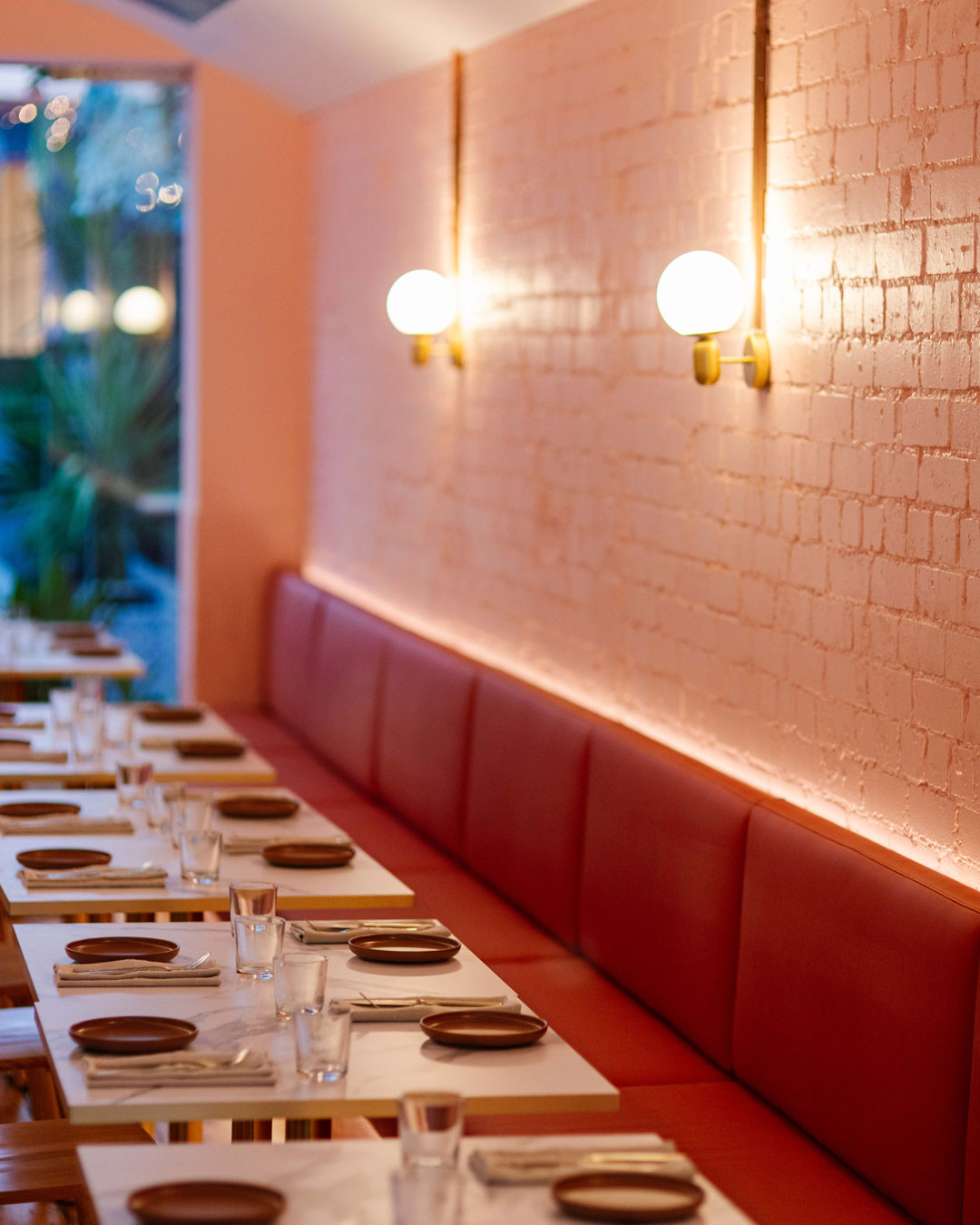 Bringing both the vibes and flavours of the Mexican Pacific Coast to Sydney's shiny eastern suburbs is Sinaloa. Set up in the former Mrs Sippy site, it ticks two of Sydney's current Mexican obsessions off the list with a saucy sharing-style wagyu birria on the menu, and an impressive list of boutique mezcal and agave spirits too. But there's heaps more going on here.

Led by acclaimed chef Axell Torres Villa (Bar Patron), whose resume includes time in the kitchen at Noma and MeroToro where he was mentored by Jair Tellez, Sinaloa's a la carte menu draws in some Aussie natives to create something new and complex. Try the scallop aguachile, a spicy ceviche with cucumber, karkalla, Davidson plum, and kelp, or the stracciatella and confit tomato tostadas with epazote oil and lemon myrtle. There are tacos, a stone-baked quesadilla, and a set menu too if you want to try it all. Oh, and bottomless brunch on the weekends, mid-week mezcal and tequila masterclasses, and a vibing open-air Hacienda bar and courtyard with DJs playing disco on Friday and Saturday nights. 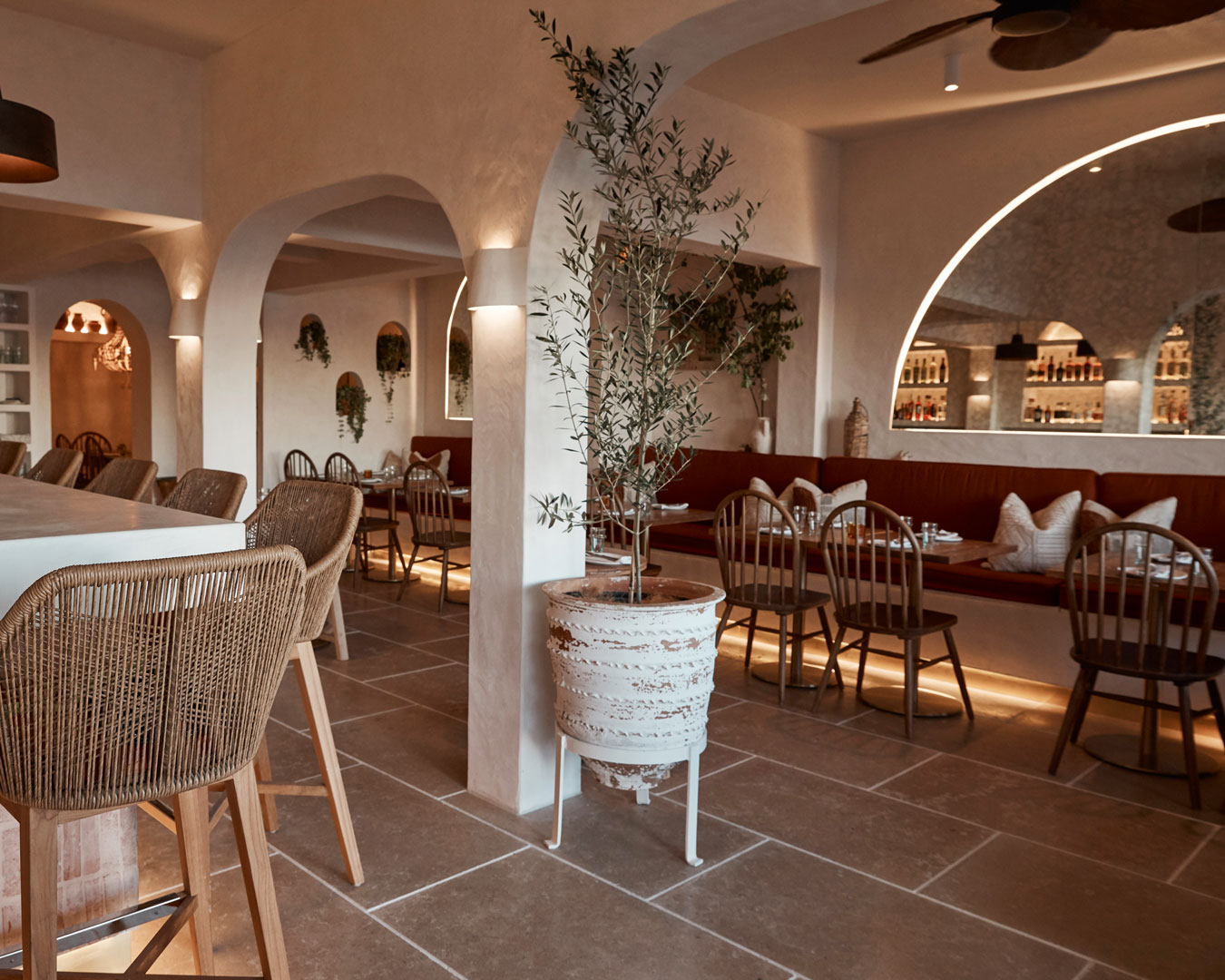 From the shores of Mexico to the Greek Islands we go. Named after a teeny island beloved for its community vibes, Ikaria has opened its doors in sunny Bondi on Thursday 15 April. Behind the breezy new meze bar is husband and wife duo Joaquin Saez and Emily Abay. Saez is bringing experience from Alberto’s Lounge, Cho Cho San, and Fratelli Paradiso and says Ikaria is centred on "the Greek Islands' approach of adding life to our years, instead of trying to add years to our lives.” Amen to that.

The menu is fuss-free and simple, think classic Greek meze like saganaki, with chestnut honey and lemon, grilled octopus, fried calamari, and keftedes. Pair this with a little seaside air and one of Ikaria's signature cocktails, like the Hades with ouzo, dark rum, Sesame Orgeat, pomegranate, passion fruit, and lime bitters, and you're totally winning.

Tokyo Lamington is open daily from 7am - 3pm. 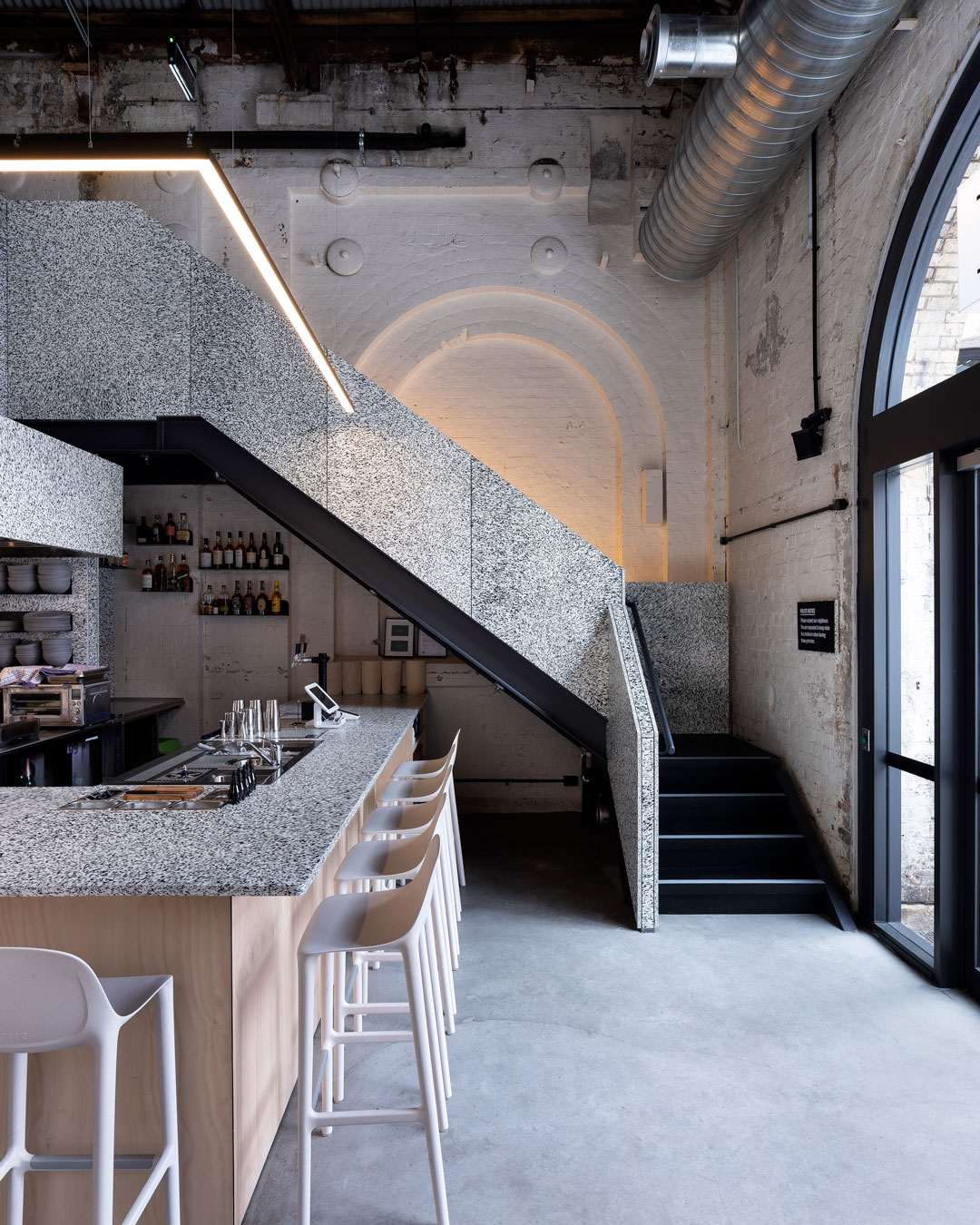 Probably one of the most anticipated new bar openings of 2021 is Re. Partly due to the team behind it (award-winning bartender and mixologist Matt Whiley and restauranteur Maurice Terzini), but also because it's one of the more boundary-pushing bar concepts to have popped up in Sydney recently. Re is the planet's only permanent establishment to operate almost entirely off of waste produce and recycled materials.

Just about everything at Re has been considered through a lens of sustainability. From the interior design choices to the glassware, ingredients, and garnishes, Re is pushing the concept of zero waste to new heights. But what does a low-waste cocktail involve, you ask? Poured into reclaimed Maison Balzac glasses, standout drinks to try include a Martini with white truffle and olive leaf, a Sbagliato with a hint of rhubarb, and a Margarita infused with rockmelon. The Re spritz is made with plums and peaches otherwise destined for the compost, and banana skins form the base of a syrup that goes into the "PB + B Old Fashioned", which is flavoured with peanut butter and burnt butter.

Re is open Tuesday through Saturday from 4pm - 12am. 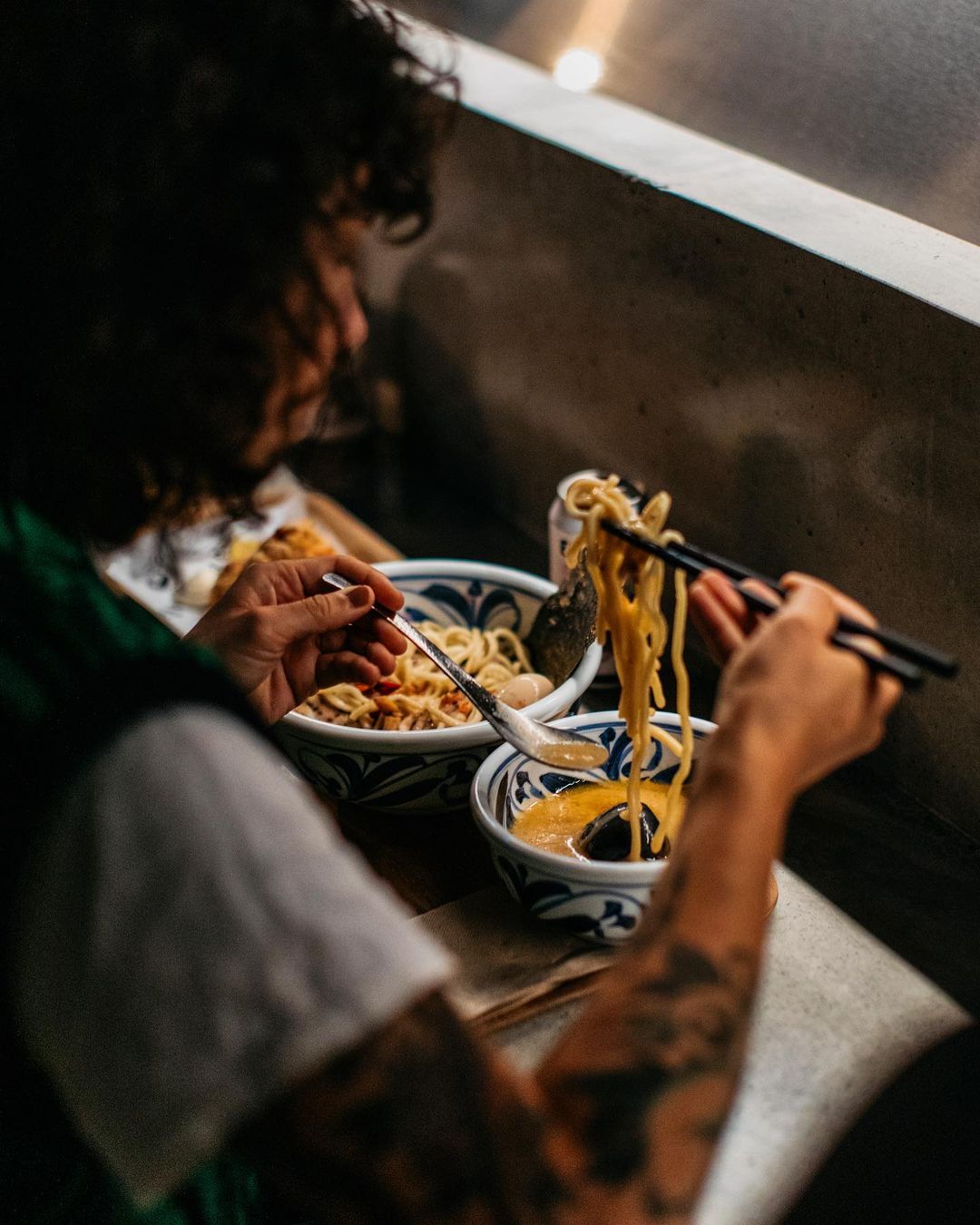 Also in the brand new South Eveleigh dining precinct, RaRa Chan is the brand-new pint-sized sister of Redfern’s beloved RaRa Ramen. Chan is the word for little sister in Japanese, and this baby ramen bar specialises in Tsukemen—a sort of deconstructed ramen invented in the 60s that involves dipping your noodles and toppings in a separate bowl of broth. Made with large, chewy noodles, pork chashu, and a rich, thick broth, and yes—this will absolutely be our winter staple as the temp drops in coming months. RaRa Chan is also plating up pan-fried pork gyoza with housemade soy, chicken katsu curry made with a housemade RaRa curry sauce, and a vegan rice bowl with slow-cooked seasoned jackfruit.

RaRa Chan is open for lunch Monday through Saturday, and dinner on Fridays and Saturdays. 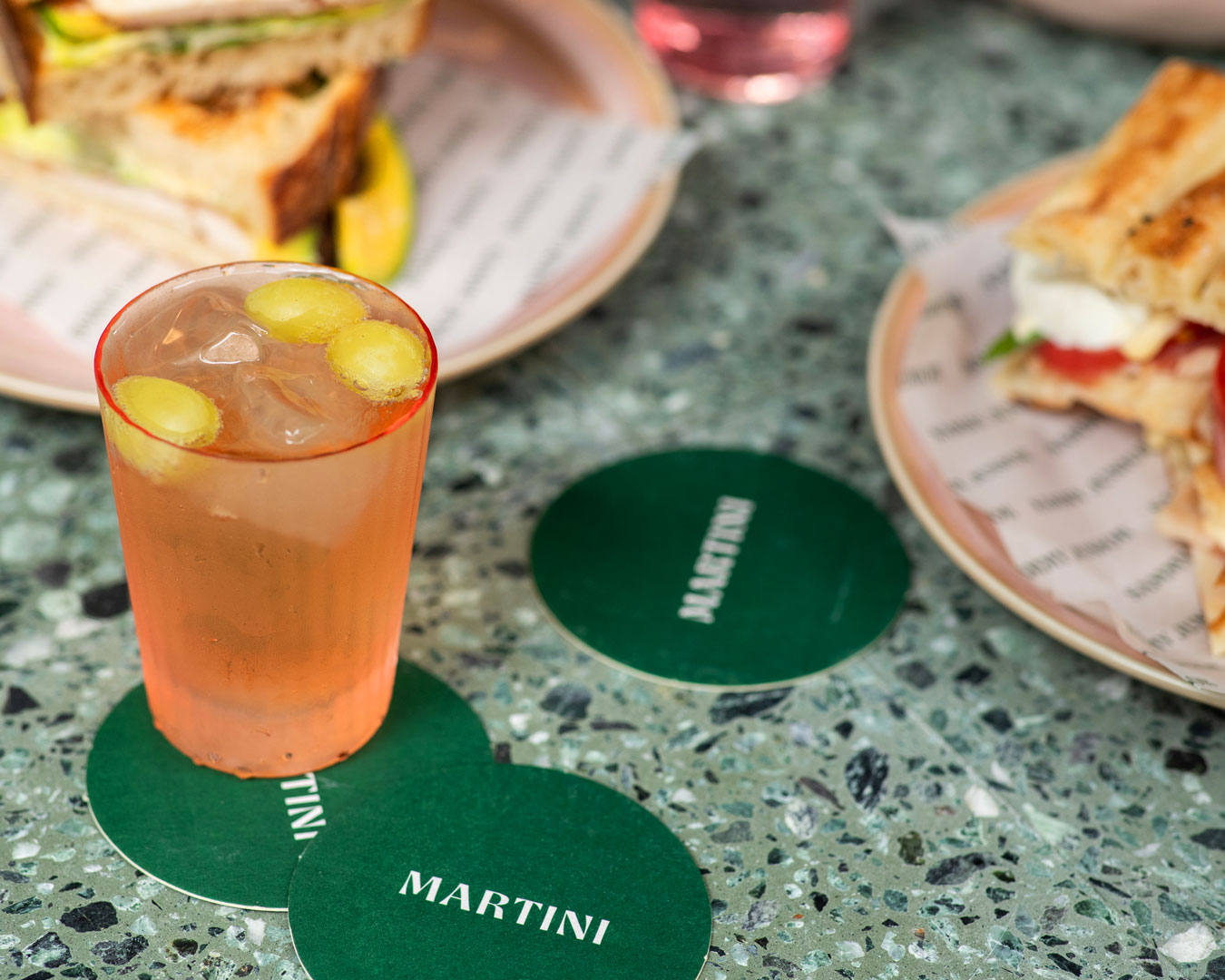 Fresh from the unstoppable Maybe Sammy crew, Sammy Junior is a lavish pistachio-hued espresso bar meets cocktail spot in the heart of the CBD. The new cafe-bar is co-owned by the Maybe Sammy's Vince Lombardo, Stefano Catino, and Andrea Gualdi, as well as Spiritual Coffee founder and 2017 World Coffee in Good Spirits Champion, Martin Hudak. And with this team behind it, Sammy Junior is all set to bridge the divide between great coffee and great cocktails (and not just via an Espresso Martini).

In the AM Sammy Junior serves a bespoke Sammy Junior Spiritual Coffee blend crafted by Hudak. Come lunchtime, the Maybe Sammy cocktail show kicks off. A menu of the bar’s now-iconic 100ml mini cocktails will be served, with just six to choose from. At $13 each, take the edge off the workday with a Martini Australiano, a Cascara Fizz, or TI Punch Spritz, or get fired up for the afternoon with a coffee Negroni, a frappe-style Espresso Martini, or an Irish coffee.

Sammy Junior is open Monday through Wednesday from 7am - 5pm, and then 7am - 10pm on Thursdays and Fridays. 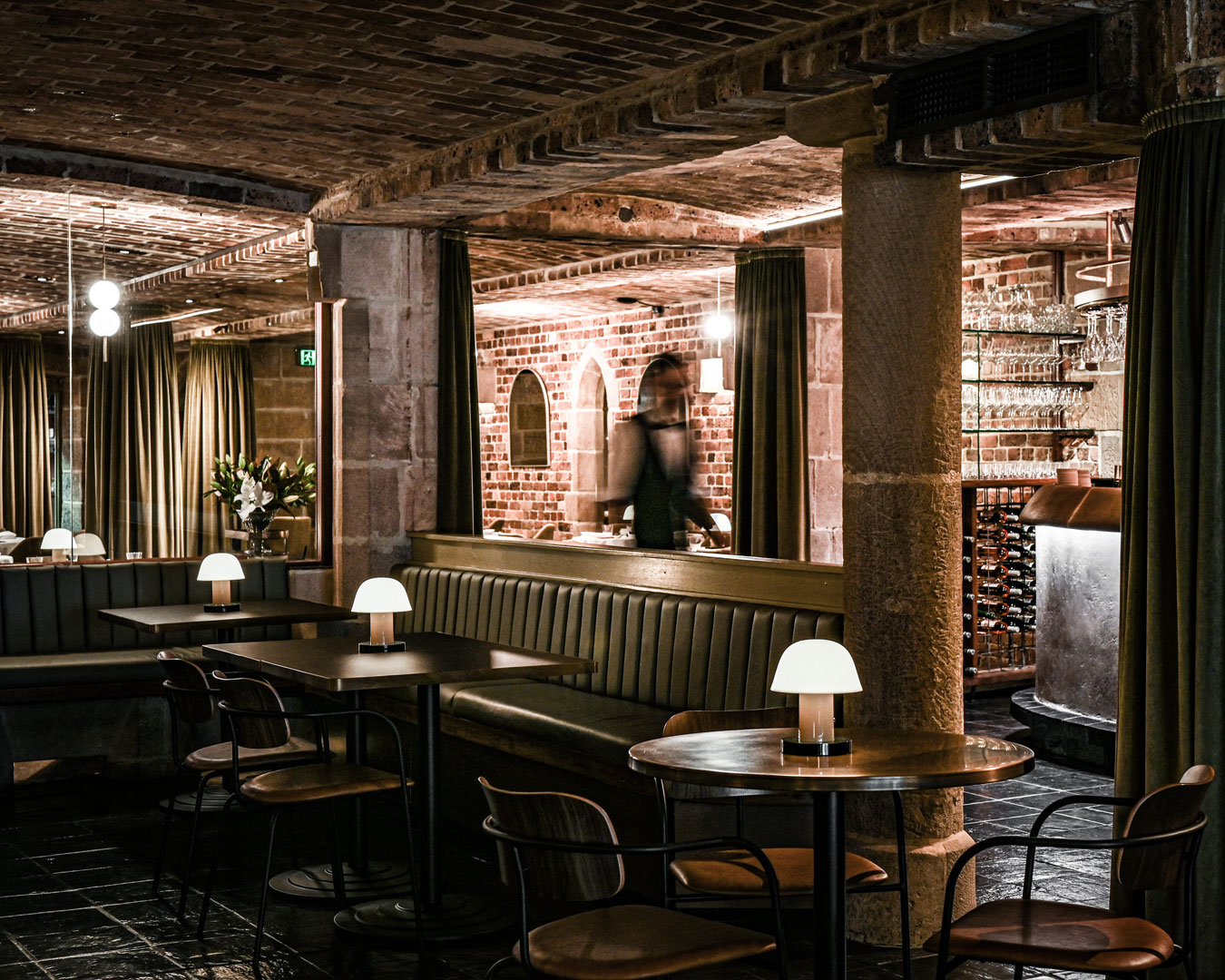 Hidden behind cast-iron gates, this semi-subterranean sandstone venue is already a little theatrical—though playwright-director Wendy Beckett enlisted her own set designer to breathe extra charm into the space with lamplit tables, green leather banquettes, plush cocktail chairs, a velvet-lined colonnade, and a baby grand piano (which will be played nightly).

As well as all that charm, via head chef  Jeff Schroeter, Beckett's revives a couple of famous Sydney dishes. First, his own Queensland-caught vanilla lobster from the heydays of Bistro Moncur. As well as the lobster come-back, Schroeter has dug up another iconic Sydney dish: Thievery's burnt butter hummus. The legendary Glebe restaurant may have closed, but Schroeter couldn't let that hummus go, listing it on his menu at Beckett's as "Thievery Stolen Hummus". Our recommendation? Dial up the romance with Beckett's martini, a boozy symphony of Widges gin and Mancino Secco, and order a plate of the Never Never gin and beetroot cured Mt Cook salmon with Yarra Valley salmon pearls. Divine. 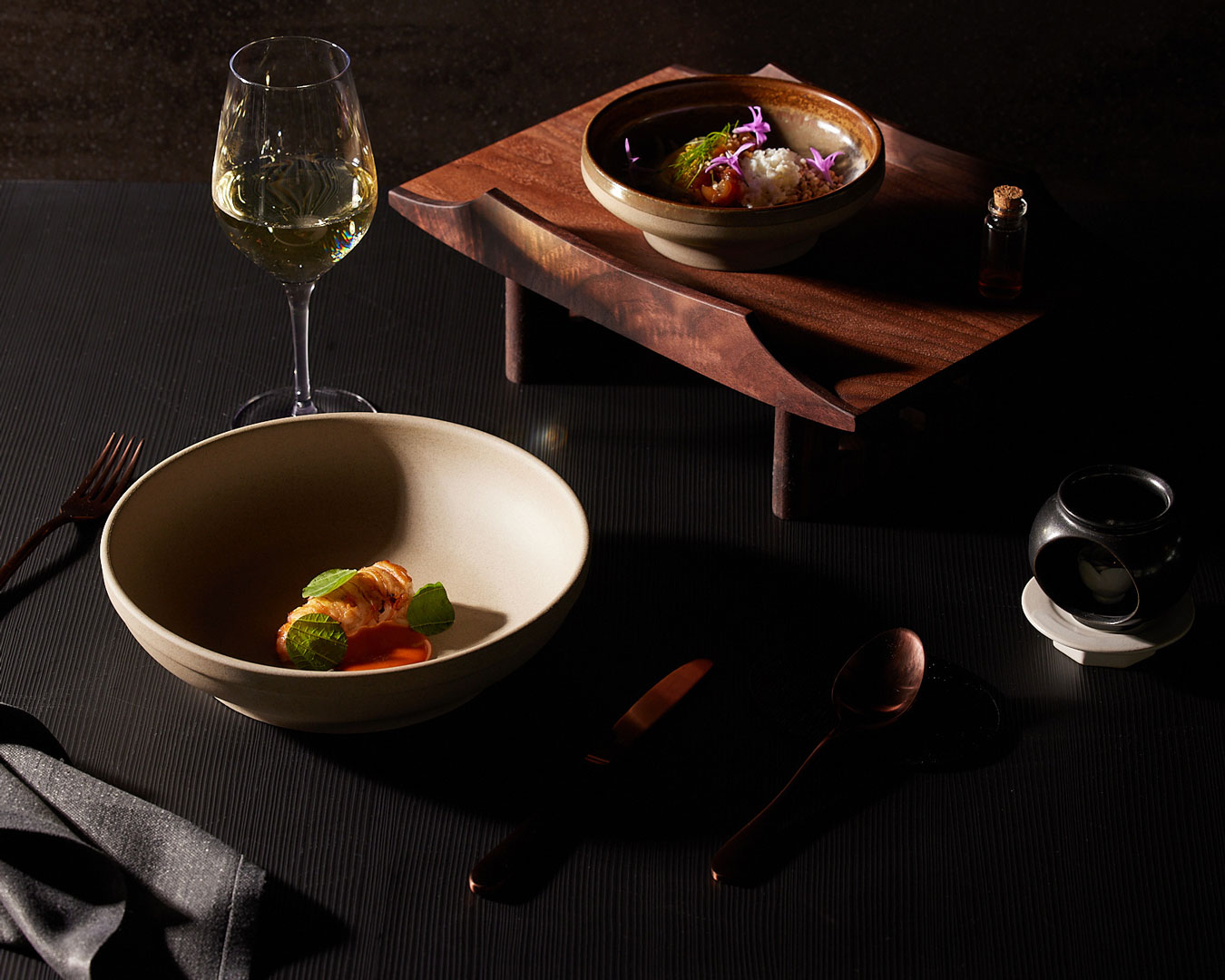 Korean cuisine seems to be having a real moment in Sydney right now—and let's just say, we are not complaining. The latest addition is Jung Sung in Chippendale's Old Rum Store building. Don't expect Korean BBQ here—head chef Insup Kim has honed his craft in Michelin-starred venues in the States like Del Pesto and A Voce. Using authentic Korean cooking techniques with a little modern polish, it's all tasting menus here with three and five courses offered at dinner time. Standouts on the menu include Berkshire pork with brussel sprout kimchi and peach puree, soy-marinated, and butter-poached Moreton Bay Bug, Wagyu beef (MB 9+) with a 10 year brewed soy sauce, and jalapeno jus.

Jung Sung is open for lunch and dinner, Tuesday through Sunday. 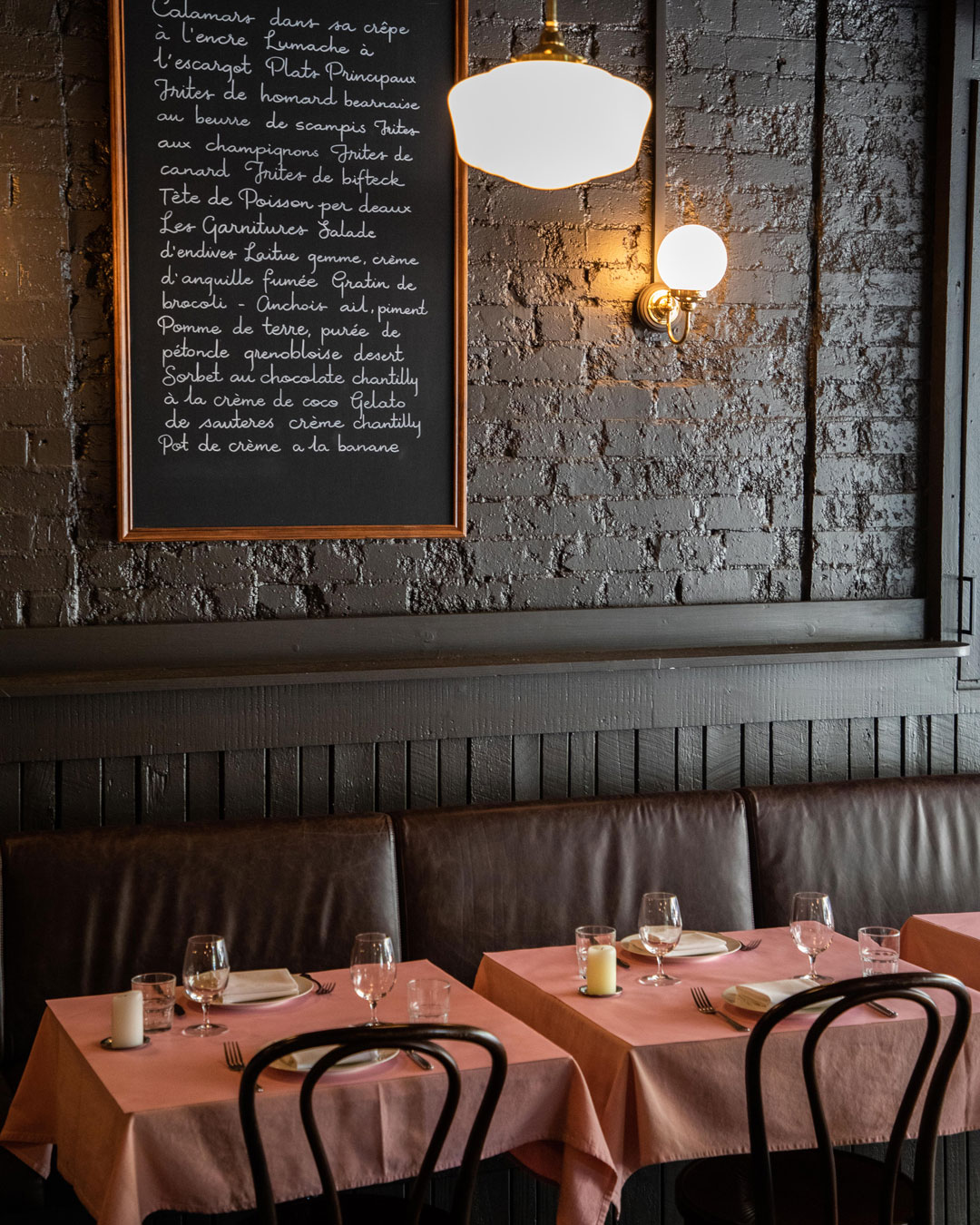 Picking up where Lotus 2.0 left off at Challis Avenue, Bistrot 916 is a neo-bistro and the newest Daniel Pepperell venue. Pepperell's legacy includes 10 William St,  Restaurant Hubert, and Alberto’s Lounge—so yeah, this is going to be good. He's joined by Michael Clift, whose CV includes the Fat Duck and an eight-year tenure at Rockpool Dining Group, and former Swillhouse group sommelier, Andy Tyson.

As for what all this talent will be cooking up at Bistrot 916, expect to see simple, seafood-centric, French bistro icons with the smack of creative flair this trio has become known for. “There’ll be shucked chilled oysters, raw shellfish served on ice, steak au poivre, and duck frites,” says Pepperell. “As well as some less familiar dishes, like boudin noir spring rolls, or handmade pasta dressed in garlic and snails.”

If you've been pining for a trip to France, you'll be pleased to know Tyson's wine list will feature next-generation French producers, as well as a big selection of grower Champagnes, White Burgundy, and Châteauneuf-du-Pape regions. We're also especially fond of the candy pink table cloths.

Bistrot 916 is open seven days, with lunch available on Fridays, Saturdays, and Sundays.

P&V's fresh Paddington spot is an expansion on the OG bottleshop, bringing the same edit of natural wine to the eastern suburbs, but also includes a courtyard wine bar where you're able to crack open that bottle you just bought for a small corkage fee. There's also space for wine workshops and a French bistro called Porcine that will be open Thursday through Sunday with chefs Nick Hill (The Old Fitz) and Henry Levy (Don Peppino's) in the kitchen. What a vibe.

Now, work your way through this list of the best restaurants in Sydney right now.