Call it what you will—reverse floating, mouth-breathing, bum-up swimming—but snorkelling is a pretty damn cool way to get in a little incidental underwater meditation. After all, who doesn’t like bobbing your troubles away and watching a seahorse or two?

We’ve done the hard work for you—and inhaled our fair share of saltwater by way of snorkel—to help you on this journey of underwater discovery, relaxation and burnt tooshes. You’re welcome.

Here are all the best spots to go snorkelling in Sydney.

Not only is The Basin one of Sydney’s most popular beach camping spots thanks to top facilities (showers, toilets, drinking water and the ol’ barbie), it’s also a primo spot for water sports. Try the Sydney Sea Horses Snorkeling Tour with EcoTreasures to view Ku-ring-gai’s estuaries and ocean nurseries. The Basin is filled with Cuttlefish, Leatherjackets, starfish, and between December and May, a number of tropical fish varieties.

You learned about it in primary school, but Kurnell is so much more than Captain’s Cook landing and a scent memory of crayons. Those keen on a snorkel should enter via Silver Beach before greeting giant Cuttlefish, Moray eels, Port Jackson sharks (super safe!) and weedy sea dragons —you can’t miss their bright blue stripes and yellow spots, they were made to show off. If you can tear your eyes away, the peninsula also features a commemorate obelisk for the big CC himself.

This is one to bring your GoPro for. One of the most popular scuba and snorkelling hangs in all New South Wales, Bare Island (north of Kurnell) is best known for Red Indian fish, big-belly sea horses, Port Jackson sharks, Gurnards and, just casually, being the site of Misson Impossible II’s villain lair. Not bad for an islet. 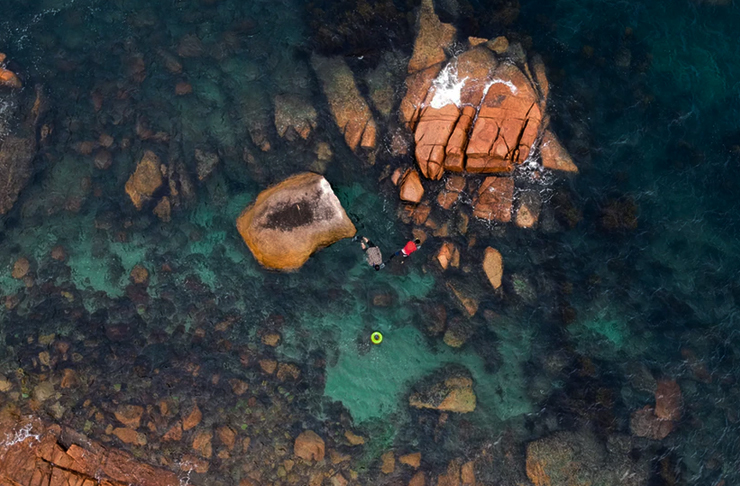 A wise crustacean once said, “Darling it’s better, down where it’s wetter” and we’re pretty sure he was talking about Little Manly Cove. After all, Little Manly Cove was practically made for the leisurely float (please, please put sunscreen on your behind) and thanks to its calm, relaxed conditions it’s ideal for those with kiddies in tow or folks averse to bumbling waves. 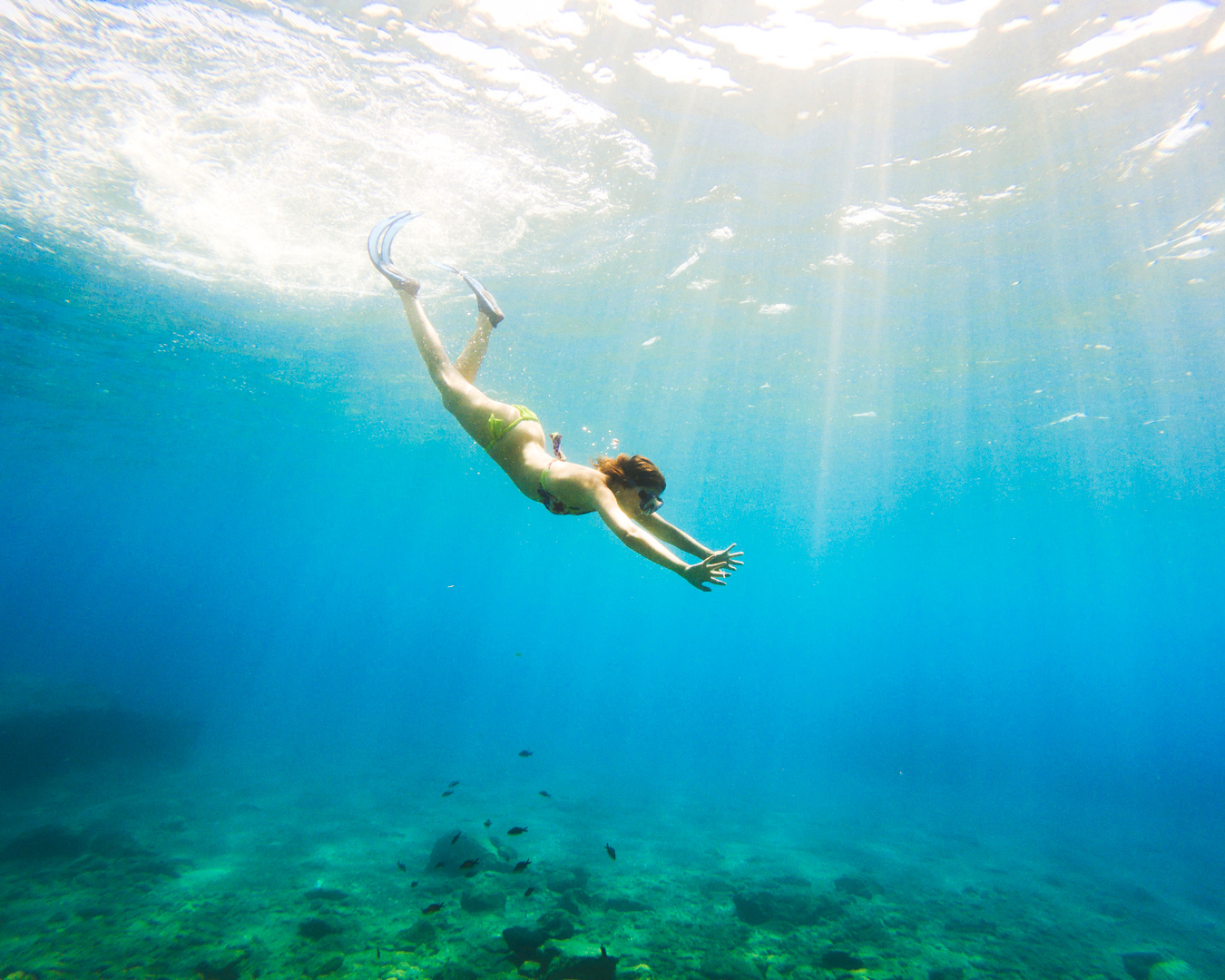 Perfect for the novice who still thinks blocking their mates snorkel with a thumb is funny, Little Bay is calm, populated by a variety of shy marine life and according to most, one of the cleanest beaches out there. You’ll find a smorgasbord of sea anemones, black urchins and itty-bitty fish in large schools; all without a wave to knock you sideways thanks to an encampment of rocky headlands.

As an aquatic reserve, Cabbage Tree Bay is a top spot to see goatfish, old wives, wobbegongs (a bottom-dwelling, docile shark) as well as more normal-sounding sea dwellers like flounder and flathead fish. Shelly Beach comes under the umbrella of this aquatic reserve as perfect for beginners thanks to clear, mostly calm waters; it’s an effortless snorkel spot if we ever saw one. Once the weather dips, this little cove becomes home to dusky whaler sharks that usually hang around the fairy bower. 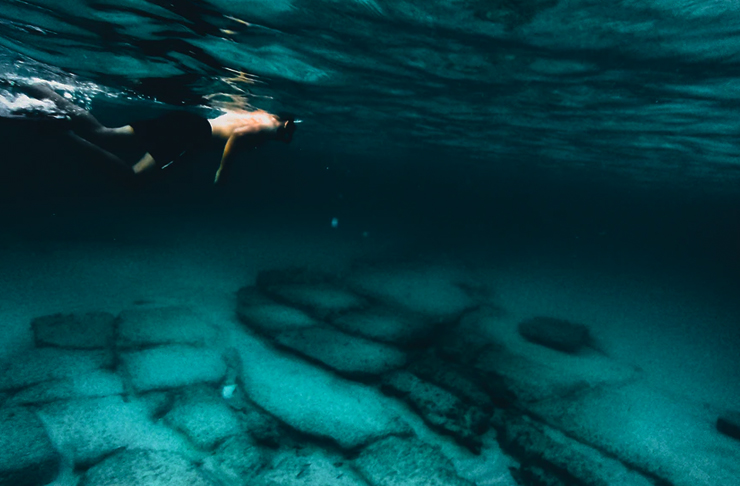 Malabar Beach is, funnily enough, the big brother of Little Bay. Named after a 1931 Singapore to Sydney shipwreck (don’t worry, everyone survived) whose bits and pieces still dot the sea, Long Bay is filled with octopus, string rays and a wide variety of fish. Pop up to Coogee Pavilion when you’ve had enough "something touched my leg" fun to enjoy a post snorkel feed.

You’ll find blue groper, goatfish, giant cuttlefish, Moray eels, weedy sea dragons, Port Jacksons and more at this popular Sutherland Shire site. Filled with tidal pools and ocean baths for an easy pre-snorkel warm-up (recommended if you’re a newbie), and plenty of parkland for the post-snorkel lie-down, Oak Park is a favourite that can be enjoyed by both beginners and advanced divers. Win.

Tucked between Clovelly and Coogee beaches, Gordons Bay is a finalist for our ‘Most Likely to be Clear and Calm’ award, which is appropriate given that it boasts an underwater nature trail. Located on the northern side and seven hundred meters long, this trail consists of submerged drums detailing the aquatic life found in Gordons Bay. We don’t want to give away the whole story, but you’ll spot starfish, sea sponges, urchins, garfish and spotted goatfish at least.

Clovelly Beach is located on prime real estate for all your snorkelling needs and is tucked within a narrow bay. You'll find all the marine life here with this gem being home to a mammoth local Blue Groper (nicknamed "Bluey").

And here's all the best spots to go kayaking in Sydney.