Sick of being a passive bystander in a movie theatre? Perhaps it’s time to become the lead in your own story. Because a good night out is no longer about hitting a bar for a quiet one, oh no. Why not get that adrenaline pumping by heading to one of Auckland’s escape rooms?

There’s plenty of adventures to be had—find da Vinci’s last invention, drown in the rabbit hole and rescue Alice, or battle cybercrime.

You’ll be locked in a room and pushed to capacity to bring out all your smarts, teamwork and physical prowess. With just 60 minutes you’ll wanna work hard and fast to beat the clock.

For all you adventurous folk, here’s our roundup of Auckland’s escape rooms... if you dare.

Break and Escape’s slogan reads: “Bring movies into real life.” And, this experience does just that. Auckland’s first fully mechanical escape room combines sound, lights, physical and light sensors, electronic mechanisms and interactive props to immerse you in an adrenaline-fueled adventure. Work your way through a series of rooms as you attempt to escape the confines of a maze-like system. Transform into a character as every team member is assigned their own role. Team work makes the dream work, so cooperation is key. With puzzles drawing on a range of topics from physics and mathematics to history and music theory, everyone will have a part to play. Beat an ancient Egyptian curse in Temple Escape: Curse of the Pharaoh, explore an abandoned psych ward in Evil Hospital or investigate the truth behind an old Atlantic legend in Prisoners of the Dark—each storyline has its own difficulty level so choose carefully or you may not make it out…

With a focus on intelligence rather than physical prowess, Escape Masters is the perfect adventure for all the brainiacs who didn’t necessarily nail gym class. Since their launch in 2014 as the first real-life escape game in New Zealand, Escape Masters have grown to provide nine adrenaline-inducing adventures between their two Auckland locations. The CBD offers a choice of seven storylines, including cybercrime, alien abduction and wrongful imprisonment, among others. And with another four themes on offer in Manukau, there’s plenty to keep your heart racing and your mind ticking.

Escape HQ on the North Shore cater for 2-70 people all playing at the same time. They even have a date night package so you can put bae through their paces. Use your analytical skills and compete against friends or family as both teams race against the clock for bragging rights. Search for food and water as you try to make your way out of the Milford Track in Lost In The Forest or search for the stolen rugby trophy in another rugby-themed adventure. Not keen on being locked in a room for an hour? These guys also have an outdoor escape where you can track international fugitives before the stolen items are lost forever. 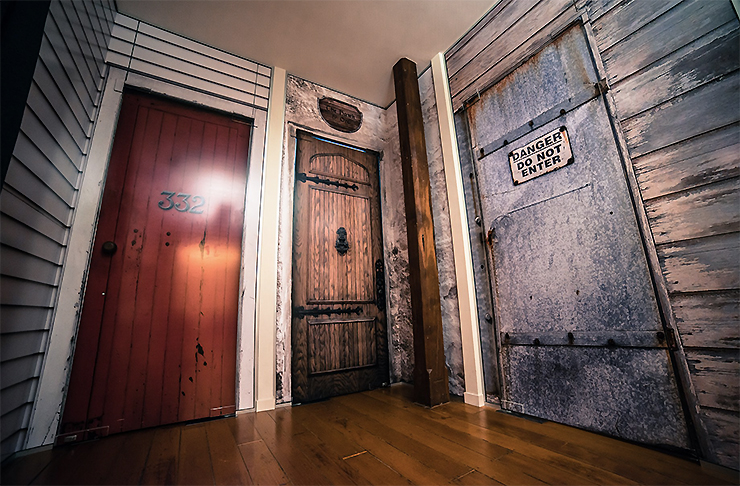 Escapade focuses on Kiwi-themed experiences, with rooms such as The Bach, The Shed, The Tavern and The Boathouse. Use your observational skills, problem solving and common sense to escape the room as you learn about Kiwi culture in the process. The challenges are more common sense oriented rather than trivia or school smarts, with physical aspects too. Follow your gran’s clues to solve an old mystery, search for treasure as you stumble upon an abandoned gold mining shed, save the city from approaching darkness as you escape from an old mystical tavern or, save yourself as you discover your racing boathouse has been tampered with by a competitor's team.

It’s not just about the adults at Takapuna’s Escape Rooms, because the sprogs have their own dedicated room. Live every kid's dream—being locked in a candy shop after hours—we reckon they won’t want to escape. For the adults, there’s the  Da Vinci Escape Room, which will have you searching for the genius’ last ever invention; The Mad Hatter, where you attempt to rescue Alice from her wild adventures; The Asylum, where you are a part of a human experiment; Mystery Boudoir, in which you solve a murder mystery; or Zombie Apocalypse (self-explanatory, right?). And, in case you find yourself struggling, you can ask for clues (but don’t, because who doesn’t want the satisfaction of escaping all on their own?)

You have found yourself in a trap and it’s time to employ your wits and creativity to get out alive. Working in groups of three to six, teamwork takes centre stage at Great Escape. Break out of a maximum-security prison to avoid a life sentence in Prison Break, run away before getting thrown in the looney bin in Psych Ward, escape crazy dream-land before you get stuck in it forever in Dreams of Alice or sneak out of Nazi Germany as you play an allied spy gathering intelligence whose identity has been compromised. Will you make it out in time?

Nestled within the Paradice Ice Skating complex in Botany Downs lies Breakout Auckland. One of the few companies that allow for teams of two people, this is a good one to test your date’s common sense and ability to work under pressure. Search high and low to find the clues and work together in order to escape. Whether you try to bring your friend's murderer to justice before said psychopath returns home, find a way to escape a nightmarish motel room or seek a way to lift a carnival curse—you have just sixty minutes to get out. Tick tock.

Keep the adrenalin pumping with a visit to Archie Brothers' Cirque Electriq.