11 Of The Coolest Motels To Visit Across Australia

While motels definitely arrived in Australia during the 50s, they really took flight as the hallmark of the great Aussie road trip during the 70s. So it should come as no surprise that the good old, trusty motel (literally a contraction of “motor” and “hotel”) has seen a serious revival as we all put some pedal to the metal and ditch our buzzing cities for a stint of R&R in the big, wide, open land of Oz.

Not sure where to head? We've got you sorted with a list of the best motels in Australia. 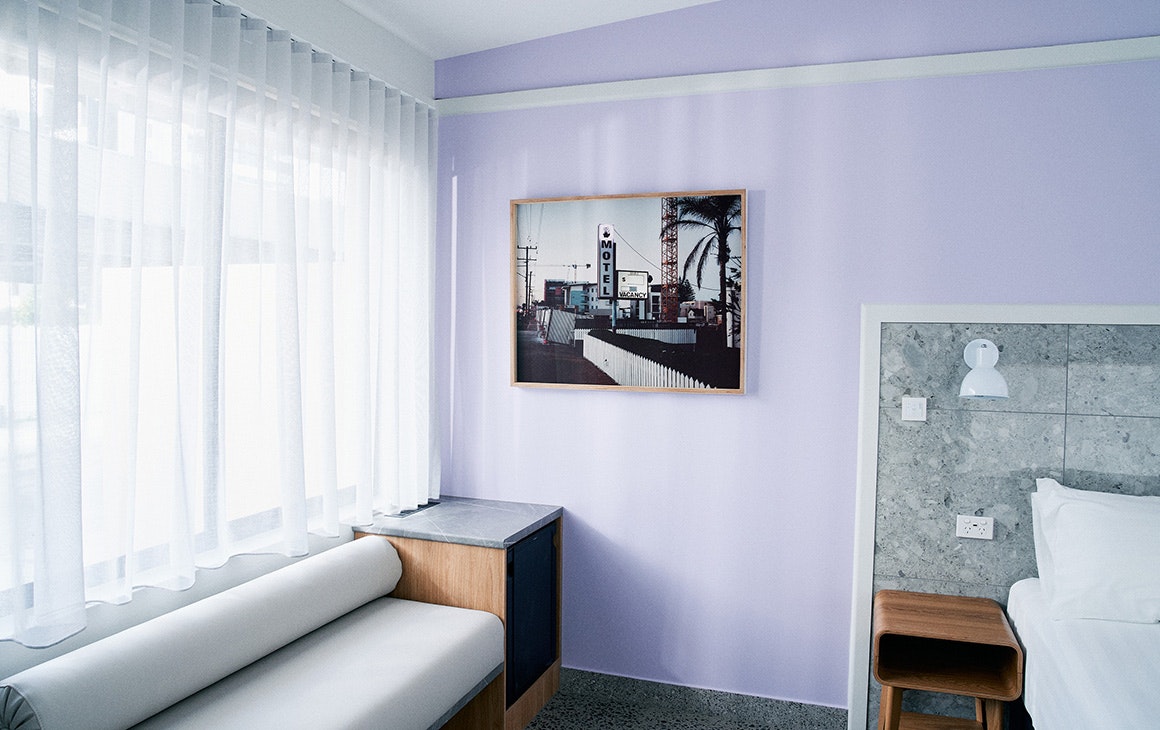 This cosy, sustainable, boutique, luxury motel nestled along the iconic Gold Coast Highway at beautiful Palm Beach, has had a serious glow up in recent years. The Mysa Motel features retro design cues with a nod to modern wellness, think: recycled vintage breeze blocks and a dreamy gelato colour palette. The rooms are kitted out with smart TVs, courtyards, air conditioning and special arrival packs. With the beach, bars and awesome cafes on your doorstep, finish off your Goldy day with a relaxing afternoon dip in the palm fringed magnesium pool.

After undergoing an extensive renovation, HotelMOTEL is where you want to rest your head on your next visit to Adelaide. With matte black finishes and navy and terracotta accents, each of the 61 rooms feature all the luxuries you’d expect to find in a hotel; a mini bar, free Wi-Fi, espresso machine with complimentary coffee pods, Thankyou bathroom amenities and a smart TV (so you can Netflix and chill). Located opposite Adelaide Park, HotelMOTEL is framed by parklands and gardens and is the perfect base to explore all Adelaide. 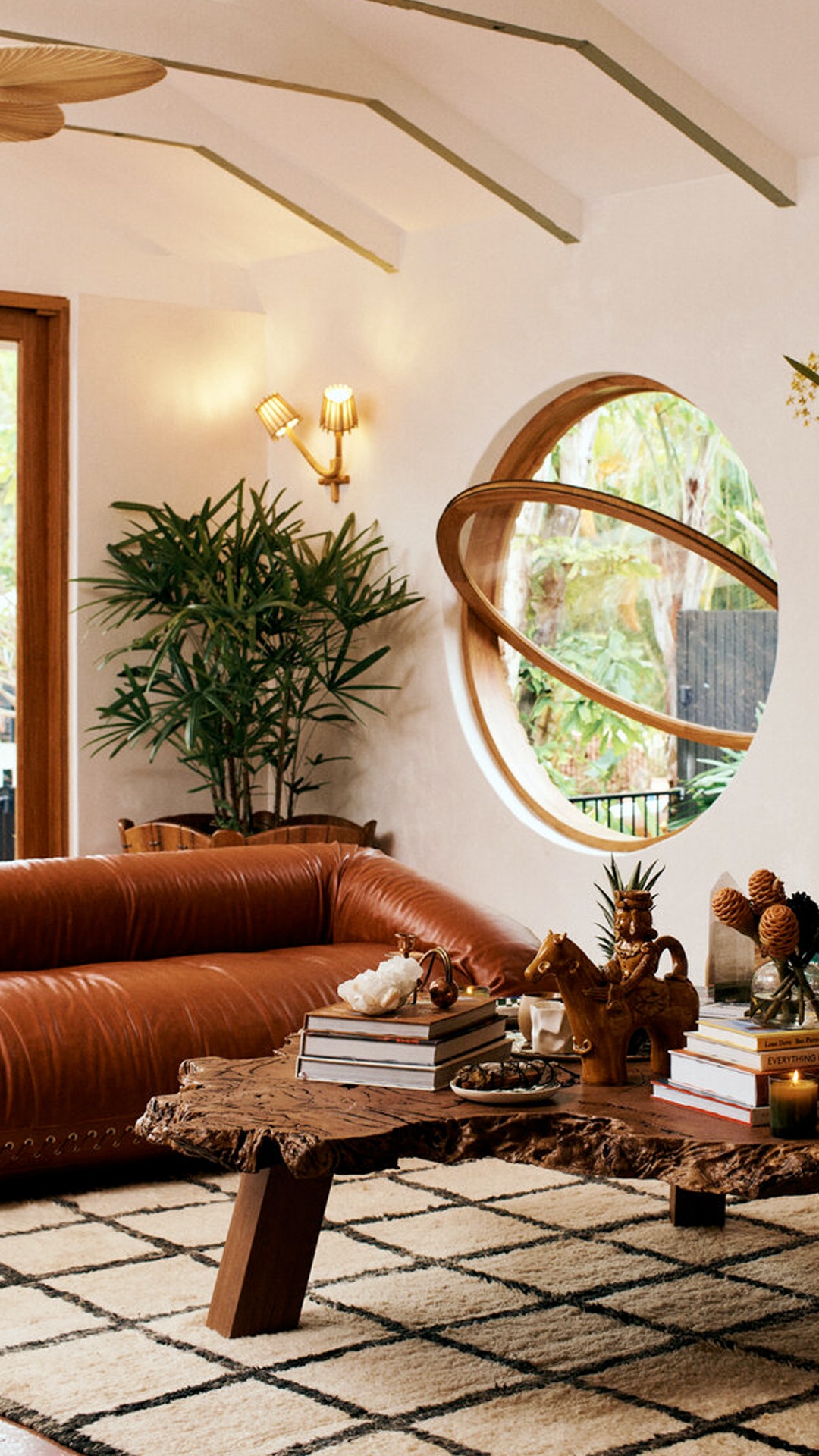 The Sunseeker is an 80s brick motel throwing it back to some slower, more conscious times. This bungalow-style stay will see you lounging poolside, perusing international reads from the 100-strong book library (specifically curated by Lora Ward of Good Publishings), getting your caffeine fix from the dedicated coffee cart or even kicking it back on the plush daybeds with a cocktail in hand. There are several types of tropical rooms here, all with custom-made furnishings and views of The Sunseekers poolscape. 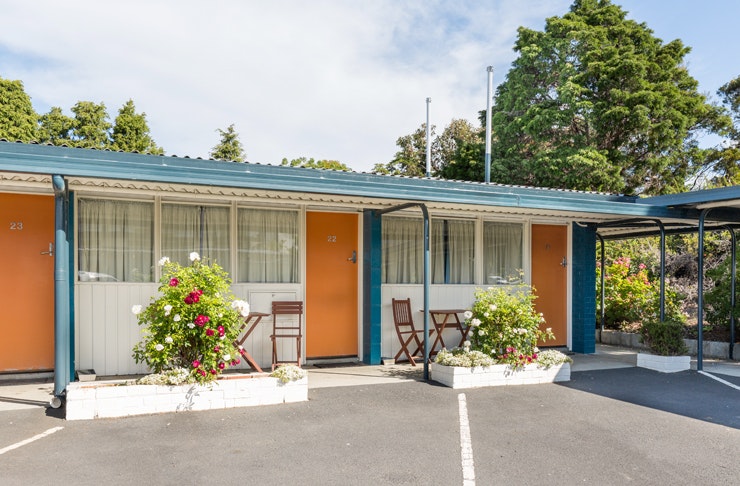 A real motel in every sense of the word, Riverfront Motel And Villas is located on the Derwent River and pretty much just around the corner from MONA. Having originally been built during the 1950s, new ownership over this property back in 2003 saw a whole lot of love being poured back into its foundations and now this Tasmanian motel sports a fresh bistro, an outdoor solar heated lap pool, a river walkway, a half tennis court, coin-operated laundry and some pretty stellar picnic spots on its seven-acre stretch. 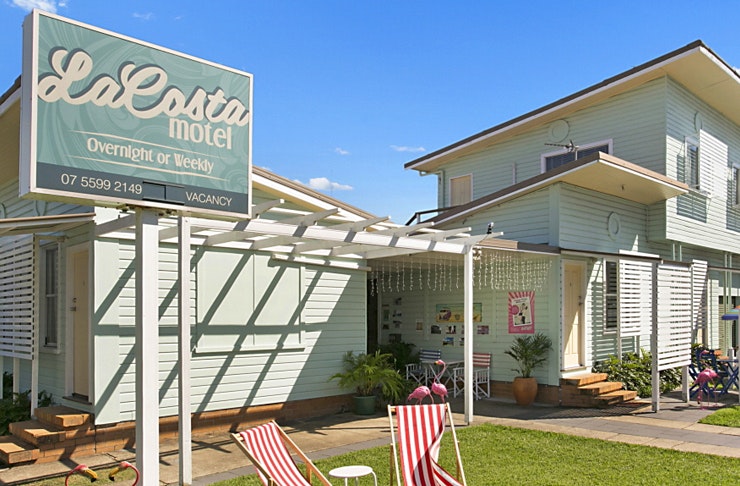 Back in the day, motels were a huge part of the Gold Coast’s tourism image and La Costa Motel is just one of the prevailing establishments still standing today. Having been built back in the 1950s, La Costa Motel was part of the original “Highway Heritage” slew of motel builds on the Gold Coast. The weatherboard-clad motel boasts a whole lot of beach shack vibes and sits about a 50-metre walk from the ocean. 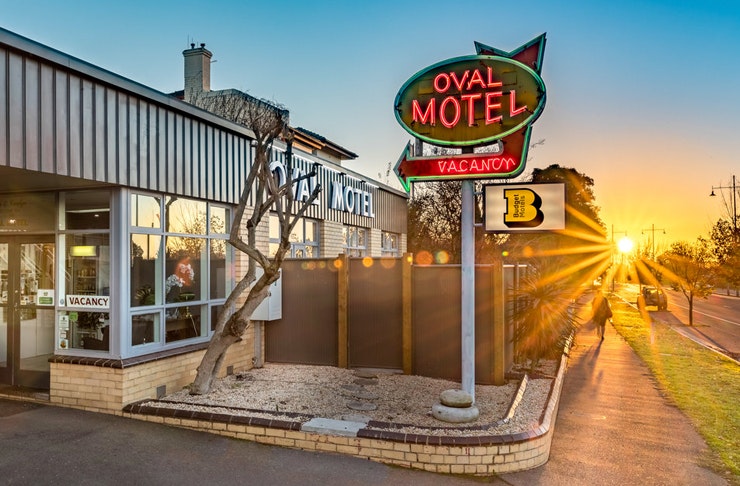 Propped up in the heart of Victoria’s Bendigo, Oval Motel prides itself on taking up some prime real estate. Run by the legendary Carolyn and Gary, this motel has a longstanding history and a rep nothing short of amazing. Close to the standout Boundary Hotel and the coffeehouse known as Harvest, this little slice of heaven is kind of a big bucket list stay in Australia. 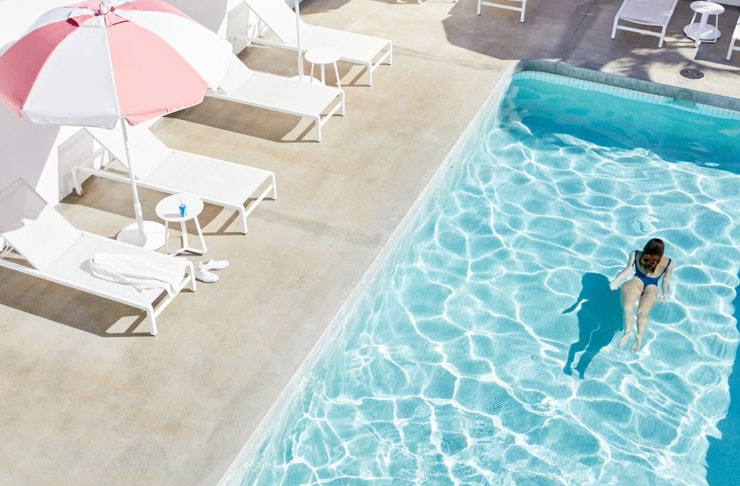 Look, there aren’t many motels that hit quite like The Sails Motel in Brunswick Head does. The Sails offers up 22 separate rooms in a Palm Springs-inspired setting which may or may not (read: it will) make you feel like you’ve jetted across the world to Coachella. There’s a beautiful blue swimming pool here with white sun chairs and striped brollies, an on-site pizza restaurant and a pool club here stocked with all the vino. 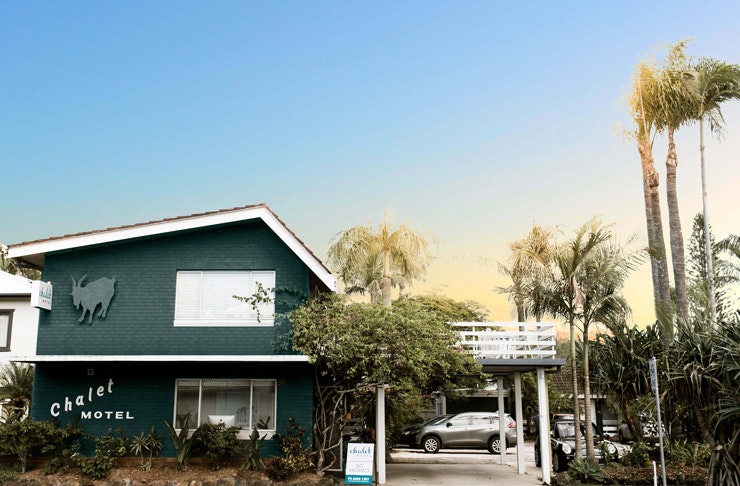 Just down the road, you’ll also find The Chalet Motel, a boutique motel giving you all the bang for your buck. Offering up 12 stylish double, queen and family-style motel rooms, this stunning motel is just minutes away from bakeries, old cinemas and river swimming. The motel itself also has a saltwater swimming pool. 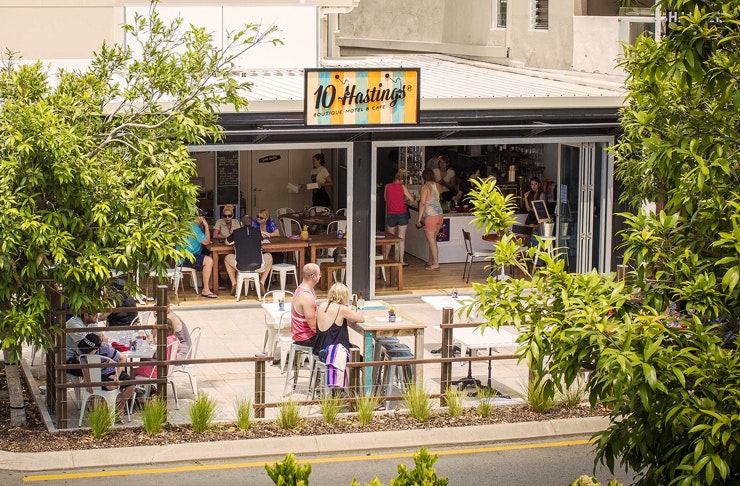 It’s hard to believe 10 Hastings Street cuts it as a motel (the beautifully adorned suites and beachfront dining situation would have you think it’s a hotel no doubt). Holding several studio rooms and a couple of bigger bedroom apartments, this intimate motel sprawls out to give you unparalleled views of Noosa’s Main Beach. The cafe here is also a local haunt with an outdoor terrace and beach indoor area (dog-friendly provided Fido is on a leash) which plates up plenty of vegetarian and gluten-free feeds. If you’re here for breakfast, the sour cherry fruit loaf toasted with local honey, fresh berries and whipped Meredith’s goat’s cheese is a vibe. 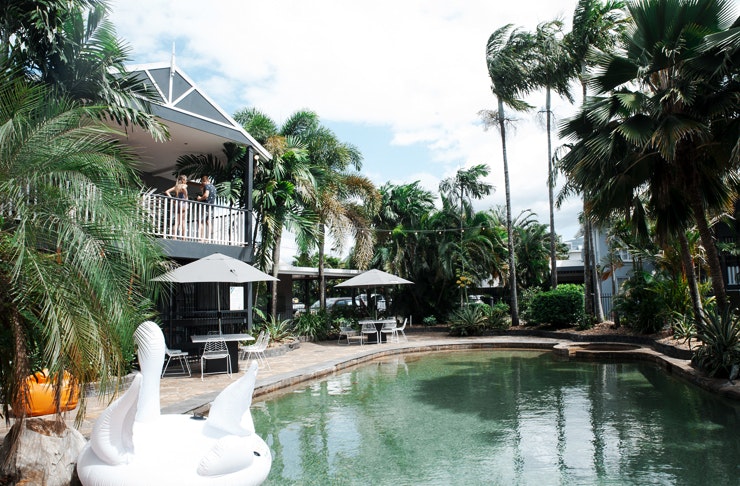 Motel Nomad takes your typical idea of a “roadside motel” to an entirely new level. While this building was put together over 30 years ago, today it stands with a fresh new refurb and with over 50 suites, studios and apartments. The motel, which takes its design from the quintessential Queenslander home (raised and with a wraparound verandah) is surrounded by palm trees, decked out in festoon lights and features a backyard pool loaded with all the inflatables you could imagine. 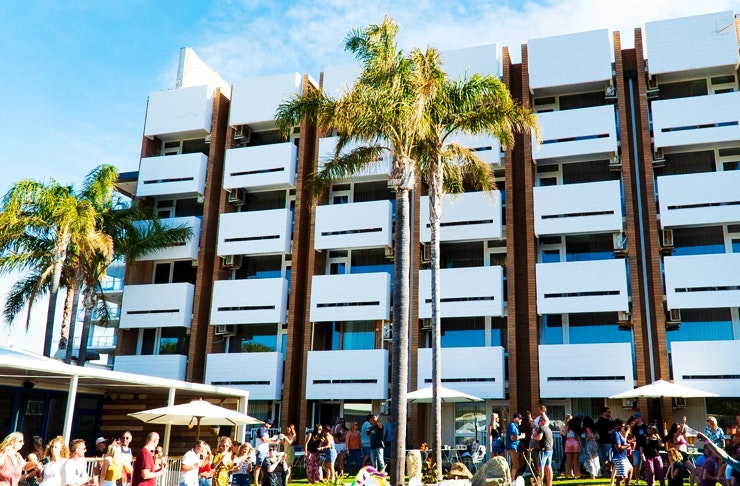 She’s not an official motel—we know, but Indian Ocean Hotel sports some serious retro vibes that can only be described as true shabby-chic, the DNA of every great motel ever. This hotel was built back in 1968 as part of the White Sands Hotel (yep, like the famous Sands Hotel in Las Vegas). It also banks up some great music stories from the 70s when it was used as a place for bands to stay including the likes of Led Zeppelin, The Rolling Stones and AC/DC. With its epic fitout, you’ll catch everything from faded hotel signs, arcade games, heavy brickwork, glowing pool lights, carpet floors and disco balls—honestly, it’s like the official set of Birdcage.

Looking to rent a whole house for your next holiday? Check out Australia's best Airbnbs.