8 Snow Destinations In Australia That Will Absolutely Blow You Away

Marshmallows over the fire, mulled wine on the deck, a European feast after an entire day of slippin’ downslope—not much beats a getaway to the snow.

And while you might not think it straight away, Australia actually keeps some stellar snow destinations that rival the likes of Aspen and Whistler. Think we’re wrong? You’re about to be proved otherwise.

Check out the best snow destinations in Australia.

As one of the primo snow destinations in Australia, Thredbo is a top spot to take to the slopes for the very first time. Providing a purpose-built beginners area with gentle slopes for the newbies, it also boasts Australia’s only alpine gondola which will take you from Thredbo Village to the base of the Cruiser area in about six minutes (yep, she’s speedy). When you’re not carving up the snow, Merritts Mountain House is the place to refuel, offering up feeds that’ll make you feel like you’re in the middle of Europe.

Thredbo has around 480 hectares of snow terrain for all levels—if you’re a novice, you’ll want to kickstart your technique at Friday Flat. When you’ve mastered the basics, you can move onto said Merritts Gondola. For the seasoned pros, you’ll obviously want to take on the bigger slopes like the Supertrail, Cannonball, Bluff and Little Beauty. You can also opt-in for a Sunrise Session with breakfast at Australia’s highest restaurant, Eagles Nest.

Where to stay in Thredbo 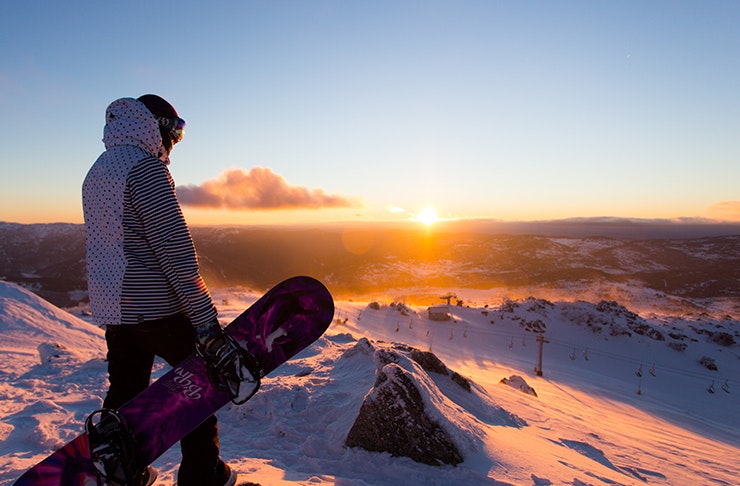 The largest ski resort in Australia, Perisher is situated in the picturesque Kosciuszko National Park and incorporates four villages including Blue Cow, Guthega, Smiggin Holes, and Perisher Valley. This alpine playground features 47 lifts and a plethora of ski runs so there's plenty of choice for both expert and first-time skiers. Here, it’s all about sledging your way through snow gums, rock outcrops and marvelling at the impressive Mount Perisher. It’s criminal to not delve into a pub feed at the Man From Snowy River Hotel and at Guthega, the Alpine Inn is the place to be for hot chocolates and coffee.

One of the most popular bars here include The Overflow Bar which is a great spot to watch the sun go down behind Front Valley. From the end of June until the beginning of September, you’ll also be privy to neon night skiing and boarding under lights—not to mention, there’s epic firework displays to be seen as well.

Where to stay in perisher 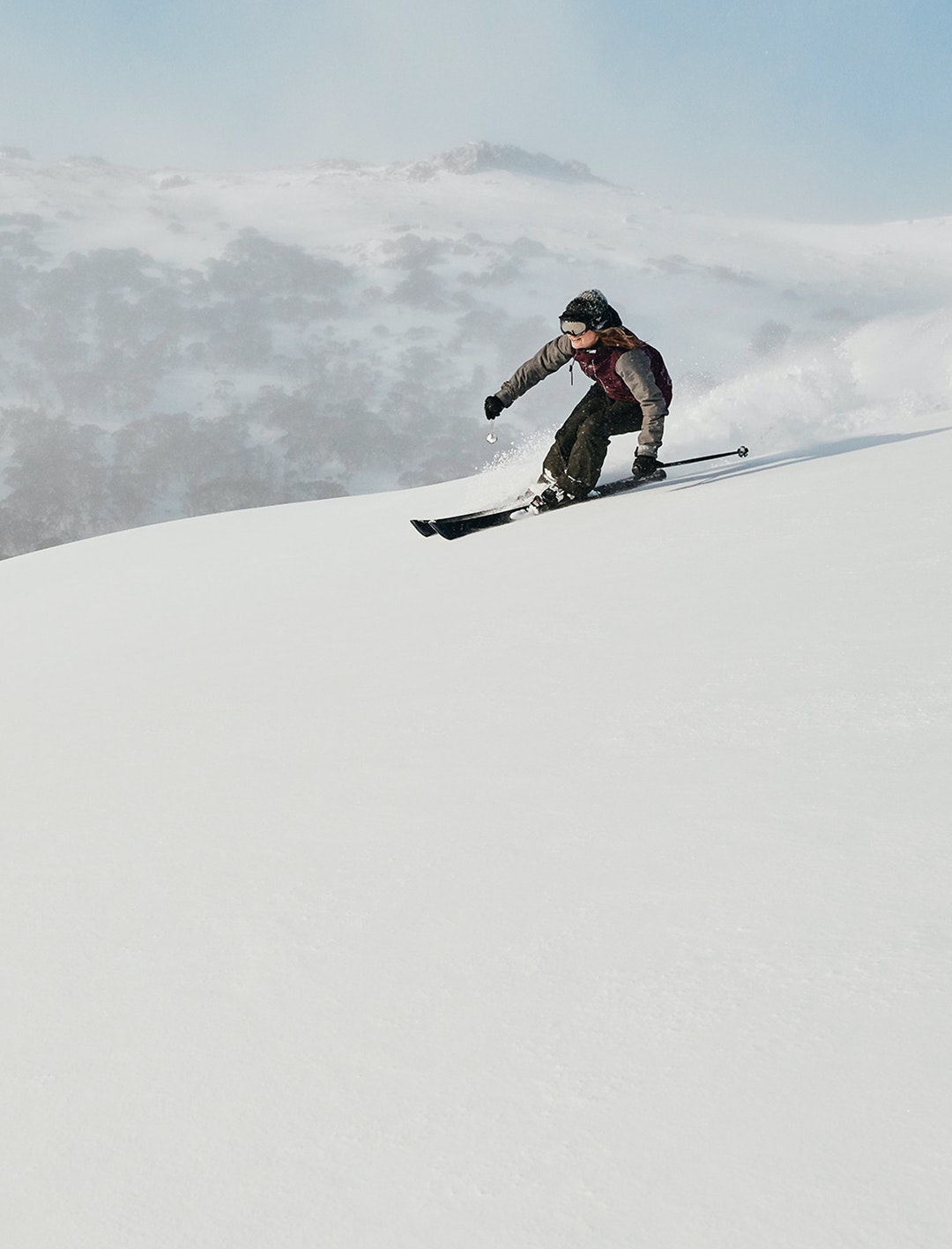 Hitting high at 1765m, Charlotte Pass is Australia’s highest snow resort—the only way to get here is through over snow transport. This gem receives some of the most consistent snowfalls which means there’s always plenty of snow for the slopes. The five lifts take skiers to 19 different runs and most of these are dedicated to beginners and intermediate skiers. For anyone more advanced than this, Guthrie’s Chutes and the Freestyle Terrain Park is calling your name.

After a day on the slopes, you can head into Adams Cocktail Lounge for après ski, with High Tea and live jazz. The Cellar is also another cracker for drinks and live music on Wednesdays and Saturdays.

Where to stay in charlotte pass 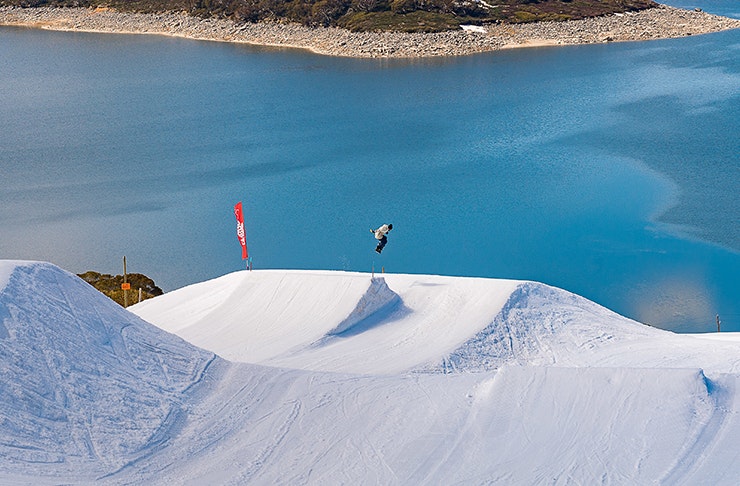 If you’re even remotely clued into the snow season, you’ll already know that Falls Creek is an all-season resort in North-East Victoria. It’s famous for its ski-in-ski-out village and features a mega 450 hectares of skiable terrain (the biggest in Victoria) which translates into 90 runs accessed by 14 lifts. A mecca for avid cross-country skiers, Falls features fast corduroy trails and new terrain off-piste in the National Park.

Where to stay in falls creek

Famed for its breathtaking and misty sunrises to seriously unforgettable panoramic views of the rugged mountain ranges, Mount Hotham is easily one of Australia’s best snow destinations you’ll want to hit up this winter. About a four-and-a-half hours' drive from the middle of Melbourne, Hotham is nestled in the Victorian Alps of the Great Dividing Range.

You’ll be in for a whopping 320 hectares of ski terrain and with that said, it’s very much been dubbed the ‘powder capital’ of Australia. Regardless of what level you’re at, Hotham sports primo landscapes for tobogganing, dog sled tours and snowmobile rides plus luxurious day spas and 18 restaurants and bars to help you close out your snow day in style.

Where to stay in mount Hotham 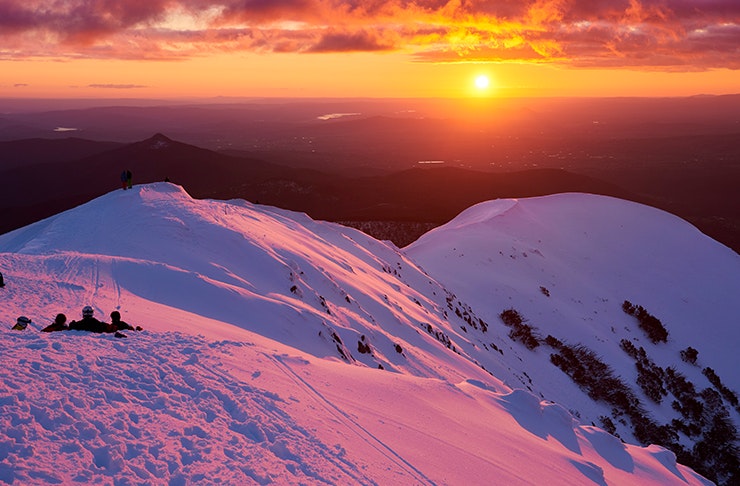 If you’re keen to roast marshmallows over a fire and soak up sunsets like never before, you’ll want to make your way to the ever stunning Mount Buller. Featuring  22 lifts, over 80 runs and a skiable area of 300 hectares so, in other words, it’s every keen snow-goers absolute dream. If skiing and snowboarding don’t tickle your fancy though, the beauty of Mount Buller is that it oozes some serious old-school charm so you can most definitely use your time to check out the museum and cinemas instead.

Kooroora Hotel is your local watering hole (with constant live music) and kicking your feet up on the open-air deck at Tirol is the perfect place for a sundowner. If you’re craving some city cocktails though, the Bird Cage is your best bet.

Where to stay in mount Buller

Mount Baw Baw is about a two-hour drive from Melbourne and 50km north of the Latrobe Valley. This key snow destination features 35 hectares of snow terrain with groomed runs, seven ski lifts, snow play areas, toboggan areas and magic carpets too (beginners will love this part). For those ready to freestyle it a bit more, there’s also 10kms of cross country skiing among snow gums and if you’re a fan of the rugged winter hike, you’ll also have a network of epic trails within Baw Baw National Park and the Great Alpine Walking Trail.

Where to stay at mount baw baw

Here’s the thing, Hartz Mountains National Park has been shaped and moulded by ancient glaciers and serves one of the most rugged wilderness terrains you’ll ever get to witness in Australia. Here, it’s all about the snowy bushwalks (save the judgement for Thredbo’s ski slopes), the glacial lakes and the alpine plateaus that look freakishly similar to Switzerland’s Mount Jungfrau. Waratah Lookout, Arve Falls and Lake Osborne are pretty basic walks which span around 60 minutes but give you stunning views into dramatic landscapes.

Where to stay in Hartz mountains national park

Prefer the warmer weather? Rent this island with your best mates for only $225 per night.