Auckland is home to countless big screen productions. While many of them are filmed in secure lots away from prying eyes, there are a number of productions that have utilised public spaces in our glorious Tāmaki Makaurau. Exploring these screen locations is a great way of uncovering hidden gems and discovering the beautiful vistas that have inspired film makers for years.

So without further ado, here’s a list of 10 epic movie locations around Auckland that made it onto the big screen. 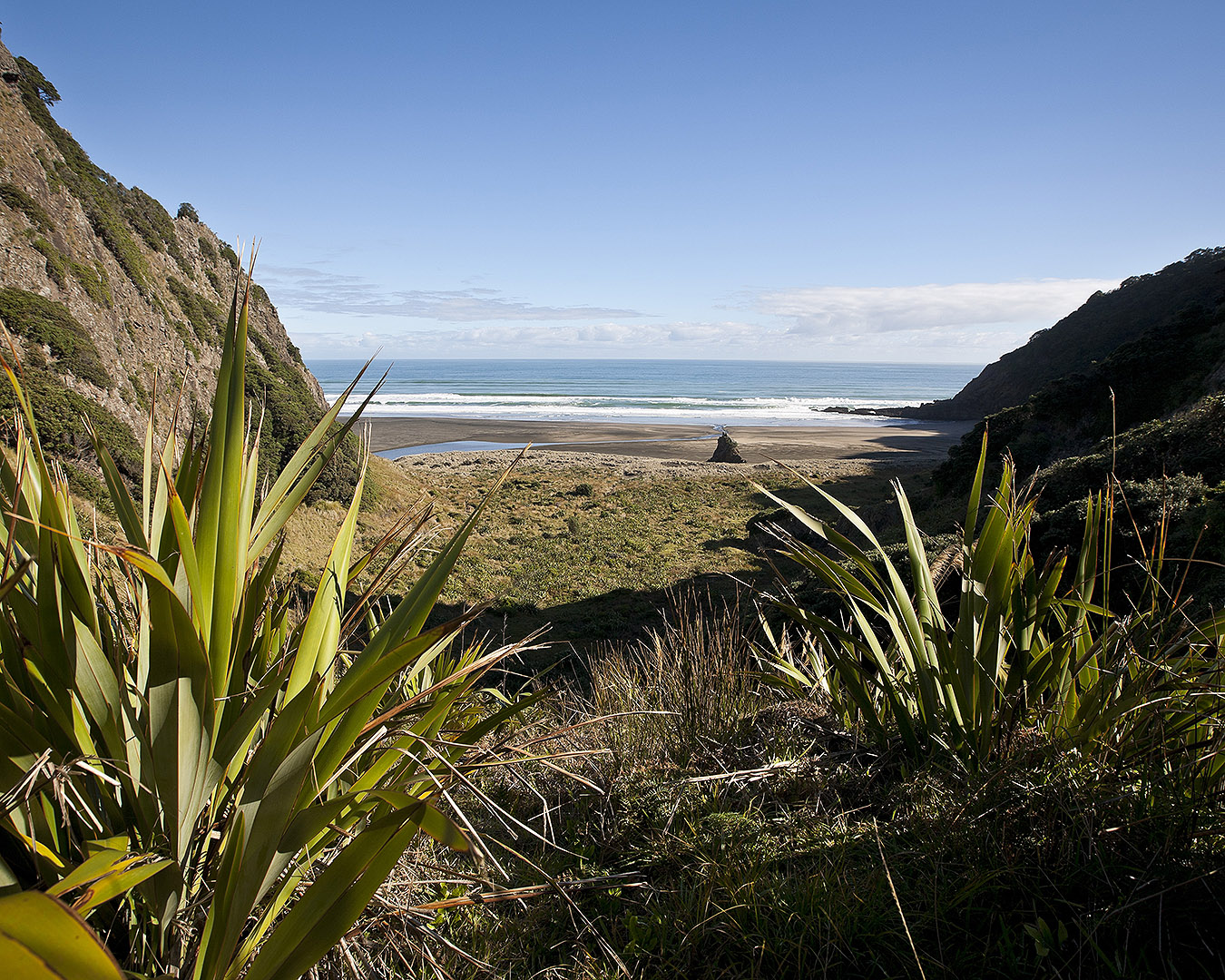 World famous thanks to Jane Campion’s The Piano, Karekare Beach is located 35km from central Auckland on the West Coast. The road into Karekare is worth the drive by itself as it weaves through native forest and goes under an arch created by a majestic pōhutukawa. Access to the beach is through the Pōhutukawa Glade walk and is surrounded by steep cliffs to add to the dramatic nature of the beach. Recreate scenes from The Piano like Anna Pacquin’s character Flora dancing on the beach as her mother Ada (Holly Hunter) plays the piano or rebuild the seahorse sandcastle from the film. Otherwise just wander along the beach and take in the beauty as you explore the shoreline. While in Karekare be sure to check out the Karekare Falls (5-10 minutes from the road). A must-see waterfall 30m high, you can view it from the start of the track or walk a bit further and you can take in its full majesty. 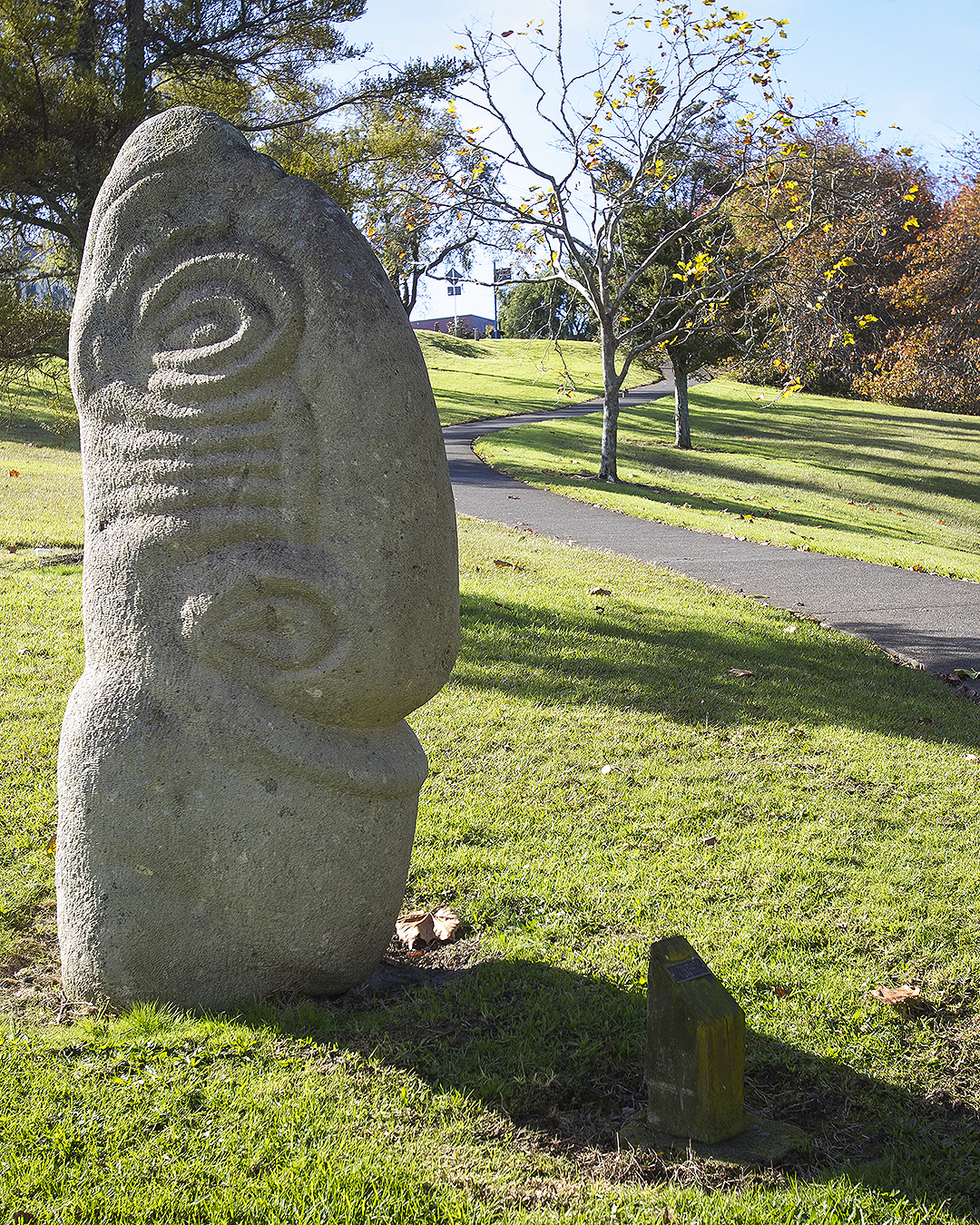 Centrally located, Ponsonby and Grey Lynn were key to Sione’s Wedding and Sione’s 2: Unfinished Business. There are a multitude of places to visit from the two films, including Karangahape Road and Ponsonby Road and the Grey Lynn library, but it’s Grey Lynn Park that steals the show. The park covers 10 hectares and is well loved by locals. With a paddling pool, playground, skate half-pipe and bike pump park there is plenty for everyone to enjoy year-round. It’s a great park for exercising or just strolling around and checking out the sculptures from local artists. But for the ultimate Sione’s Wedding experience be sure to take a ball down to the basketball court just off Dryden Street with some mates and try to recreate Duck Rocker basketball. 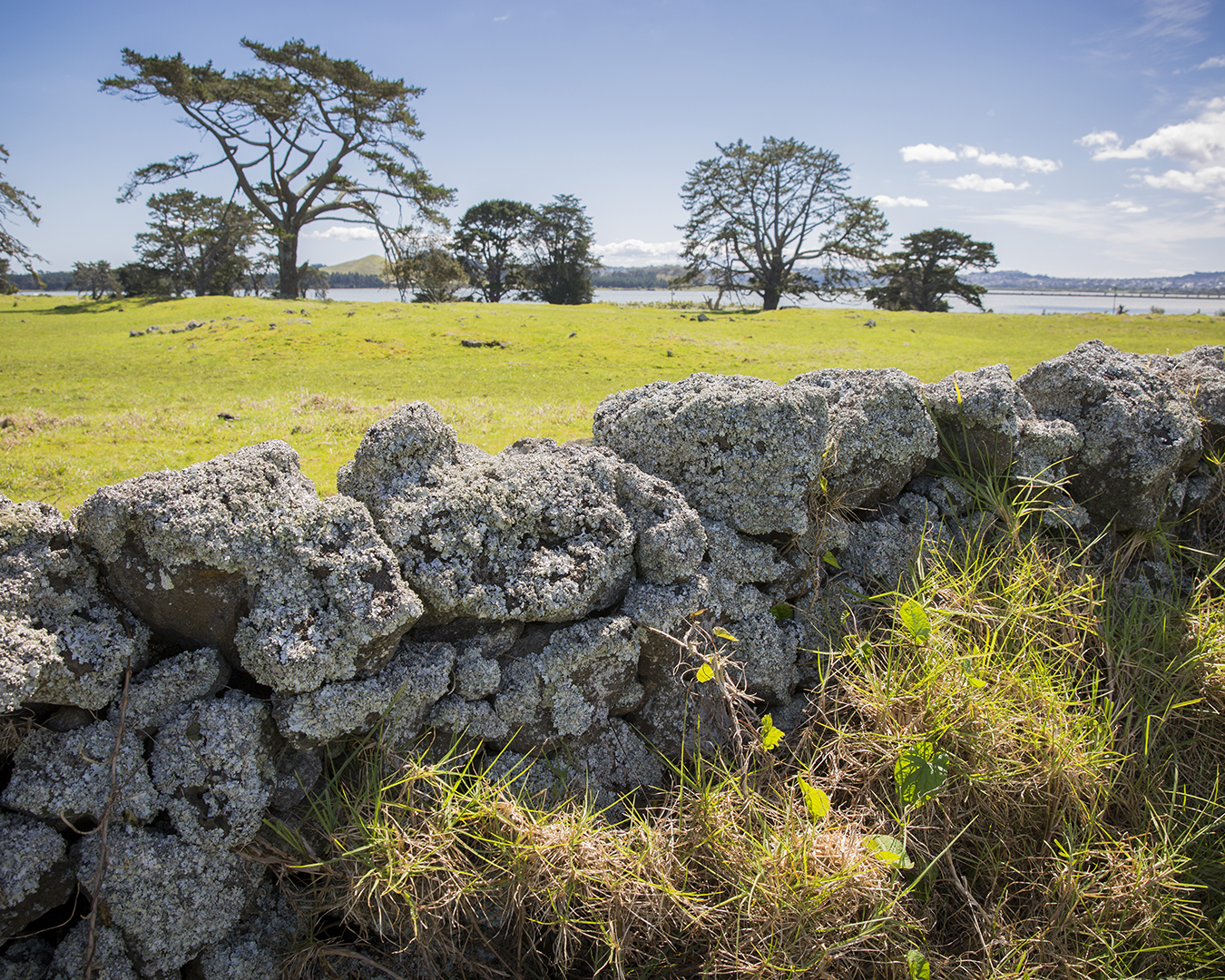 The Dead Lands movie used Ōtuataua Stonefields as a key location in the story that is told entirely in Te Reo. This location provides the backdrop for the dramatic fight scene between key antagonist Wirepa (played by Te Kohe Tuhaka) and the Warrior (played by Lawrence Makoare). Close to Auckland Airport the Ōtuataua Stonefields is a site of significance for mana whenua and is also an important archaeological site. The Category 1 Historical Place and the adjacent lands were also important for the growing settlement of Auckland in the early 1800s with Māori growing wheat and producing flour for the new settlers. Ōtuataua Stonefields has a number of walks that can be explored which allow you to explore both the geographical and historical features. Feel yourself becoming immersed in the land as you walk around and almost picture the battle scene unfolding in front of you. Because the area is considered wāhi tapu (a sacred place) by tangata whenua, please don’t eat food on the reserve and please don’t climb to the top of Puketāpapa cone and stick to the tracks marked. 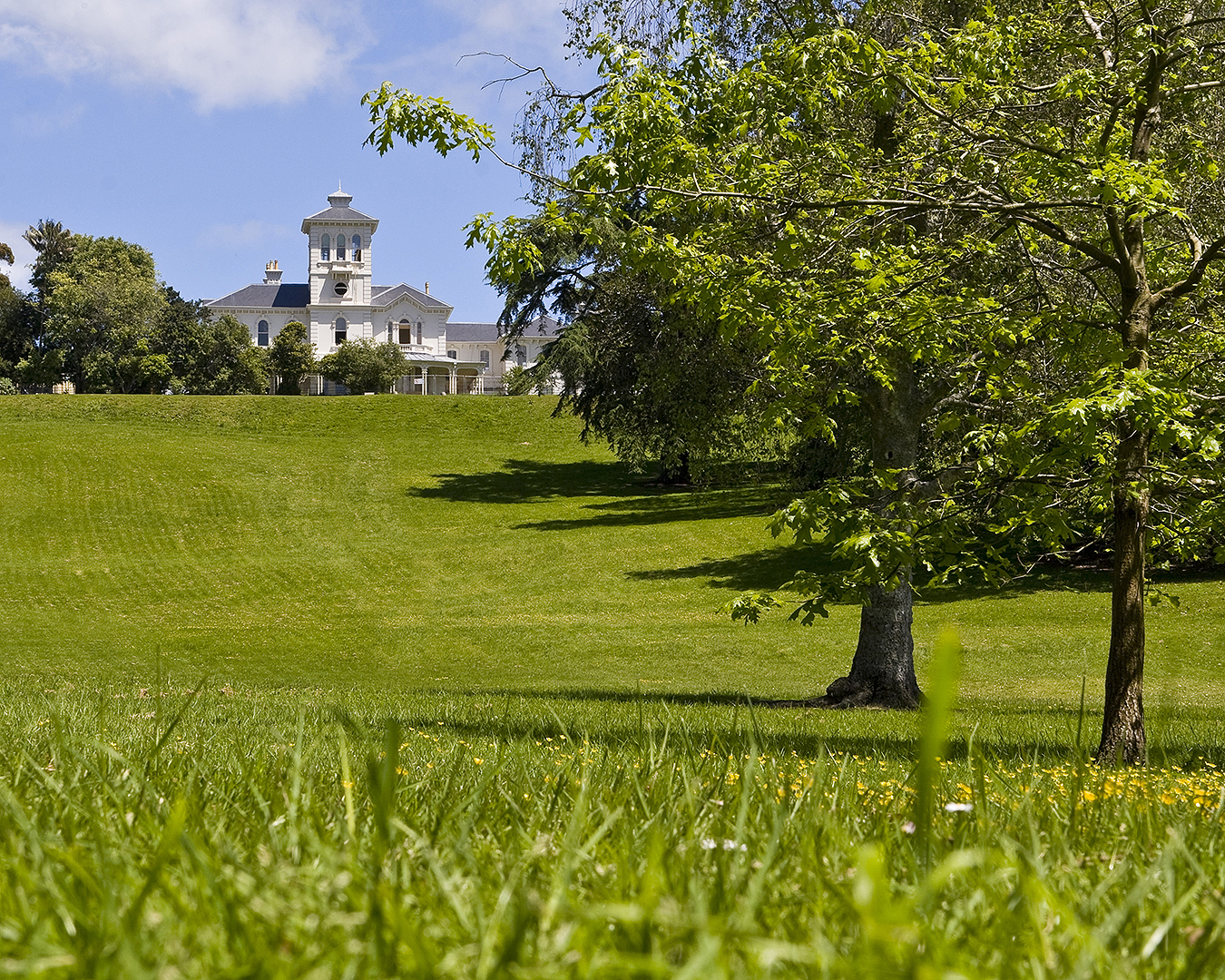 Used for the backdrop for when the Pevensie children arrive at Professor Kirke’s estate house in The Chronicles of Narnia: the Lion the Witch and the Wardrobe, Monte Cecilia Park is a beautiful place to visit in the heart of Auckland’s suburb of Hillsborough. The park was also used in garden scenes in the film, particularly when the children play cricket. Monte Cecilia Park was also used as a location for the film Emperor starring Tommy Lee Jones as General Douglas MacArthur. The homestead, which featured in the film, is home to the Wallace Arts Centre and the Homestead café. The arts centre is definitely worth a look after a stroll around the Victorian-designed setting of the park while the grassy slopes are fantastic for picnics, playing frisbee or just rolling down the hill like a kid. 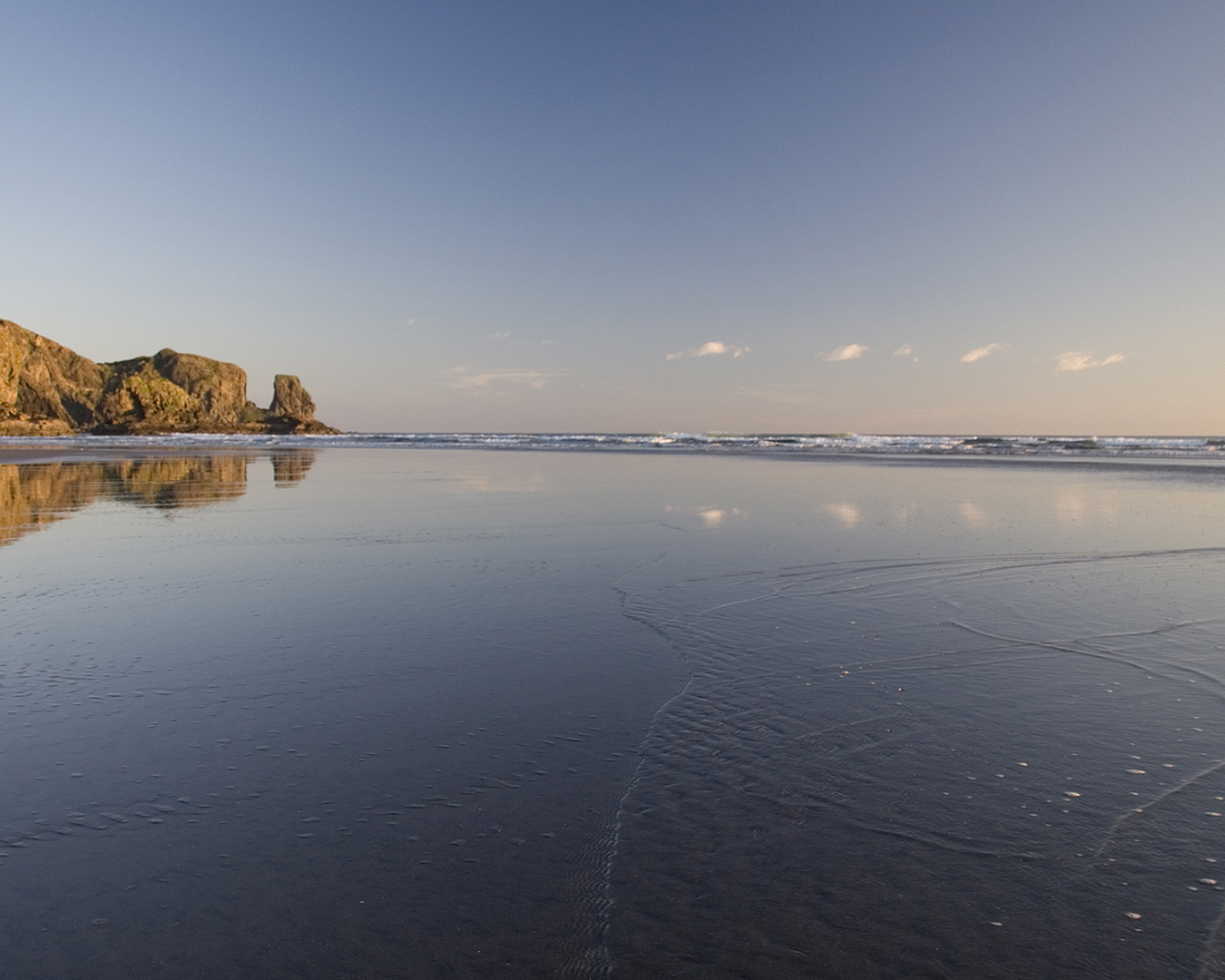 New Zealand’s favourite juvenile delinquent spent time in and around Te Henga / Bethells Beach with his “Uncle Hec” (Sam Neill) living the skuxx life as he puts it in Taika Waititi’s Hunt for the Wilderpeople. Whilst a large part of the movie was filmed on private land at Bethells Beach, Lake Wainamu was in the background of some of the shots as Ricky Baker (Julian Denison) and Hec evade capture in the film. Climb the high sand dunes to get beautiful views of Lake Wainamu and towards the bush beyond. Imagine Ricky and Hec hunting wild boar in the foothills. Or take a bodyboard and surf down the dunes. While you’re at Te Henga / Bethells, be sure to visit the black sand beach and enjoy meandering along the coast, search out the cave at the south end of the beach or wander around the edge of Lake Wainamu to see the Wainamu Falls. 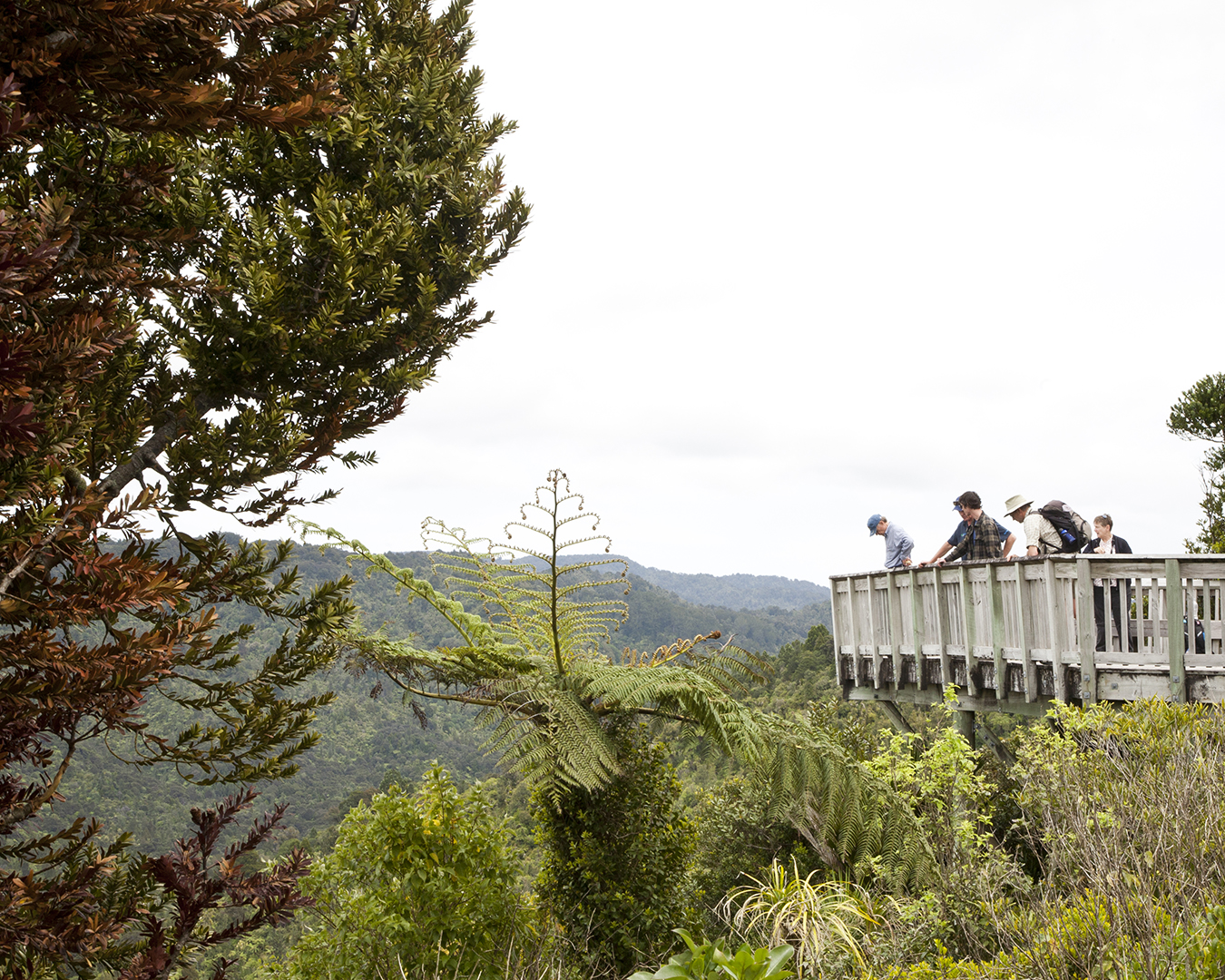 For an alternative Hunt for the Wilderpeople experience, head along Scenic Drive, particularly between the Te Henga / Bethells Beach turn-off and the Piha road. Feel like you are lost in the bush along with Ricky and Hec as the road weaves its way around the bends and curves of hill range. For a greater experience stop off at one of the open tracks along the road (the Waitākere Dam Track and the Large Kauri Walk) to check out the beauty of the Waitākere Ranges. Otherwise head to the Arataki Visitor Centre to explore the open tracks above the Lower Nihotupu Dam, including the Arataki Nature Trail, the Beveridge Track, Pipeline Road or Slip Track. The visitor centre is worth visiting to check out the panoramic views from the decks and to learn more about the Waitākere Ranges at the discovery centre exhibitions. If you do visit the Waitākere Ranges, please make sure you stick to the open paths to prevent the spread of kauri dieback. 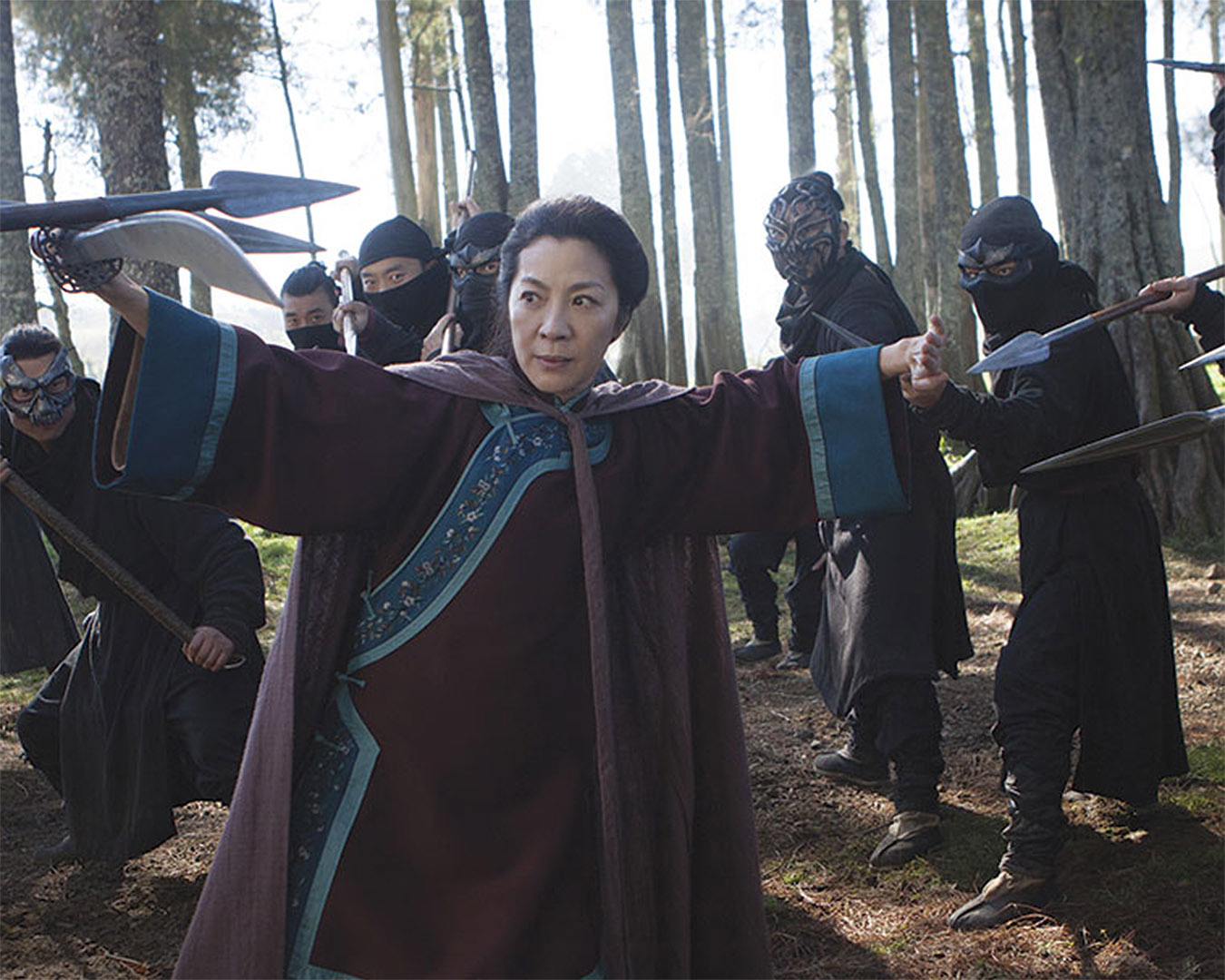 Auckland played host to wuxia (literally “martial heroes” genre) film Crouching Tiger Hidden Dragon: Sword of Destiny in 2016 with a lot of action and fight scenes filmed in and around Muriwai Regional Park. While Muriwai beach is well-known amongst surfers, the regional park encompasses the black sand beach, coastal forest, and Otakamiro Point which is home to one of the few mainland breeding colonies of tākapu (Australasian gannet). If you want to explore more secluded areas, take the track to Maukatia (Māori Bay) at the south end of Muriwai beach. With a small cave to explore at low tide or the pillow lava formations (the fan shaped structures) on the cliffs high above the bay, there are plenty of hidden qualities to Muriwai Regional Park to get amongst. 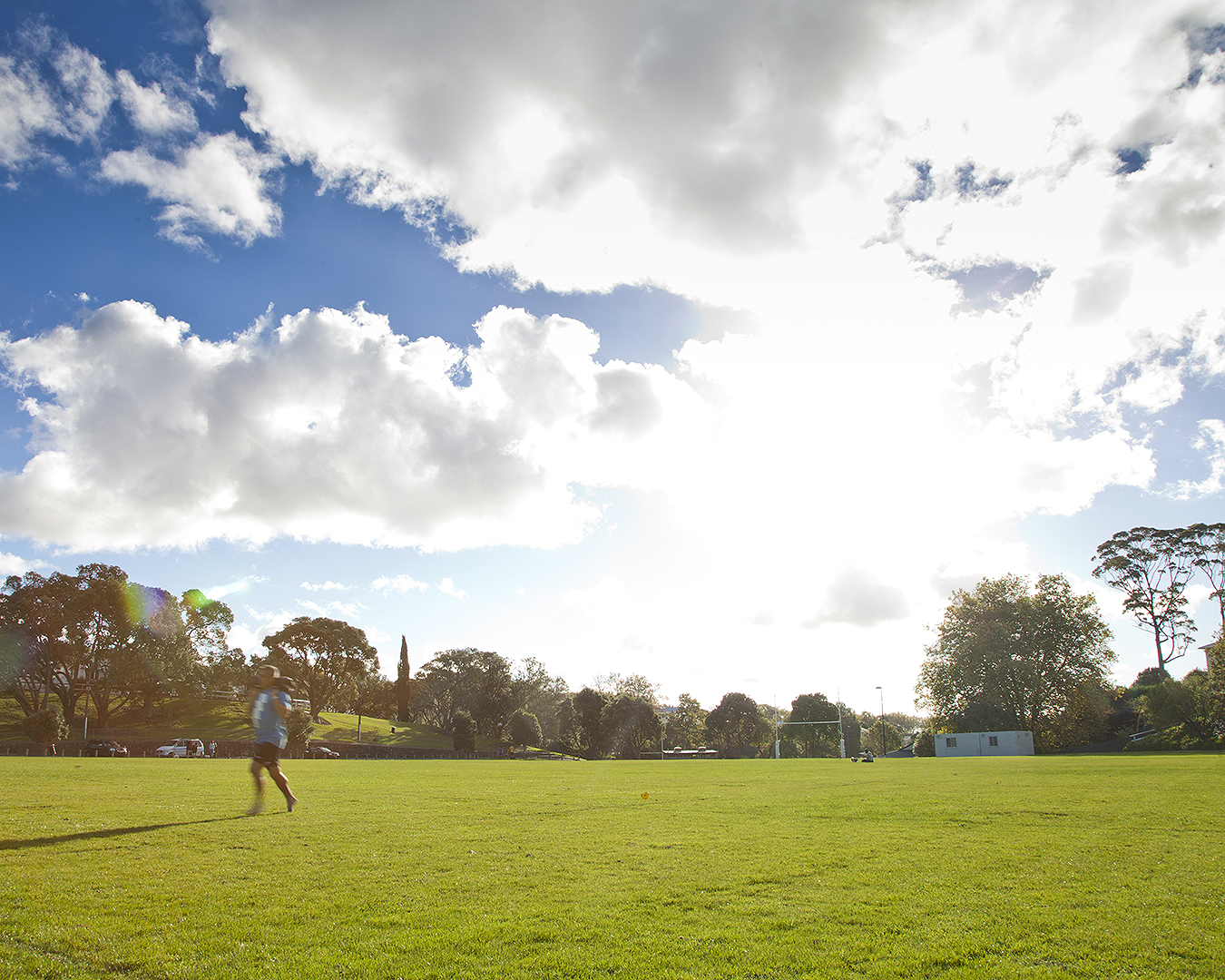 Morningside’s Fowlds Park is a large park with a number of sports fields and distinctive mature gum trees at the northern end of the park. The park was renamed in the 1930s as a tribute to Sir George Fowlds, a former Public Health Minister and local MP and the archway at the eastern entry is dedicated to him. There is an easy concreted walking path that circles the park which is great for taking a stroll and enjoying the area. Kiwi comedy The Breaker Uppers, written by comedians Madeleine Sami and Jackie van Beek, used the park to film the confrontation scene with Sepa (Ana Scotney) and her “crew”. While at the park why not recreate the chase at the end of the scene, where Mel (Sami), Jen (van Beek) and Jordan (James Rolleston) run the length of the rugby pitch in their attempts to get away from Sepa’s Crew. 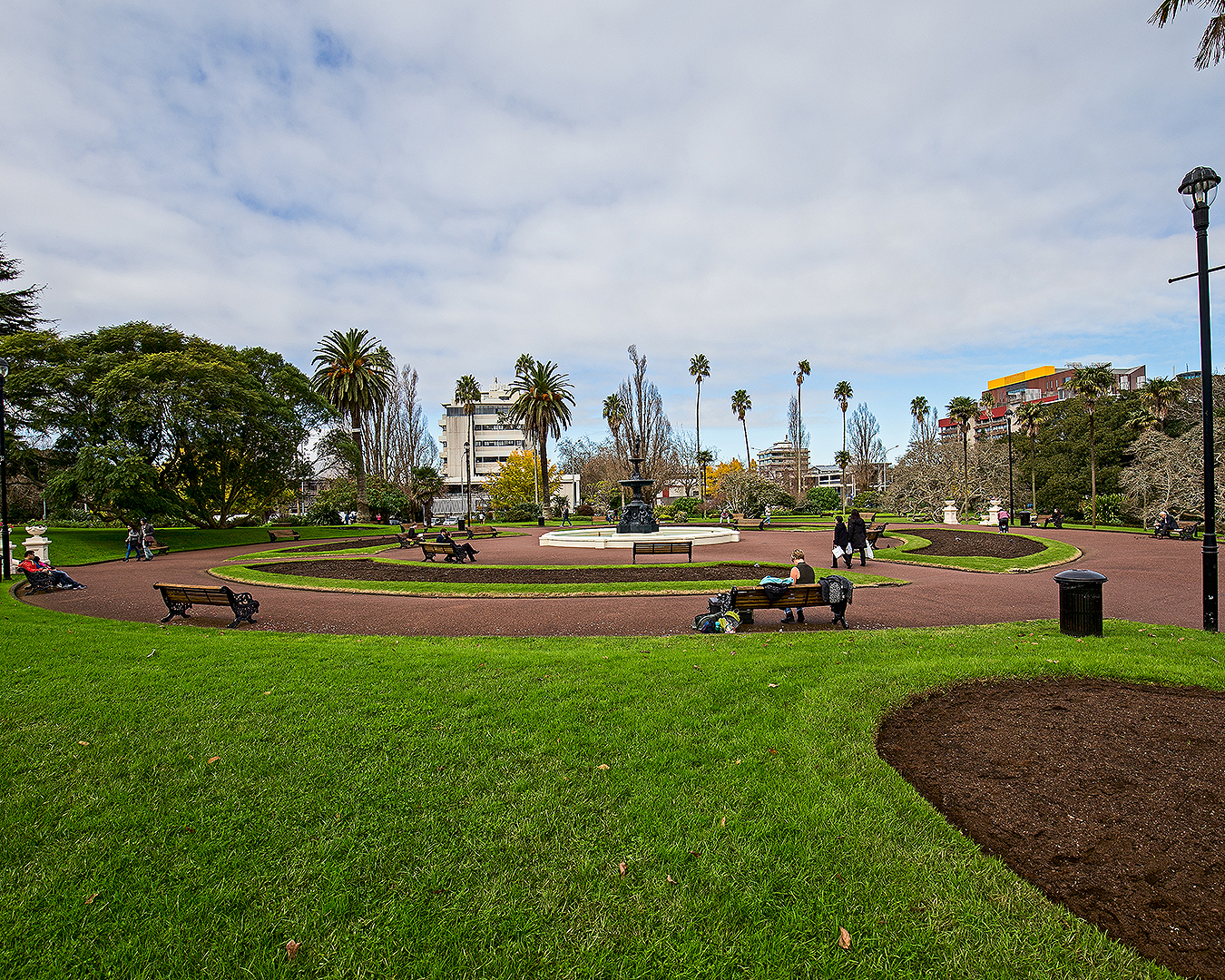 Another New Zealand film that takes advantage of the parks and green spaces throughout Tāmaki Makaurau is Hibiscus and Ruthless which follows two childhood friends during their final year of university. Albert Park was used quite a bit during the film as a scene setter, but the obvious scenes where the park features are when Hibiscus meets Stephen a number of times. With Albert Park just across the road from the University of Auckland, the scenes are a reminder of university life and the connection Albert Park has to that life. The park is one of Auckland’s oldest and more established parks. The closest park to the heart of Auckland’s city centre it lies on the remnants of an ancient volcano, a pā site and a military barracks. The Toi O Tāmaki / Auckland Art Gallery lies in the south-western corner of Albert Park and multiple statues and artworks are dotted around giving plenty to explore. 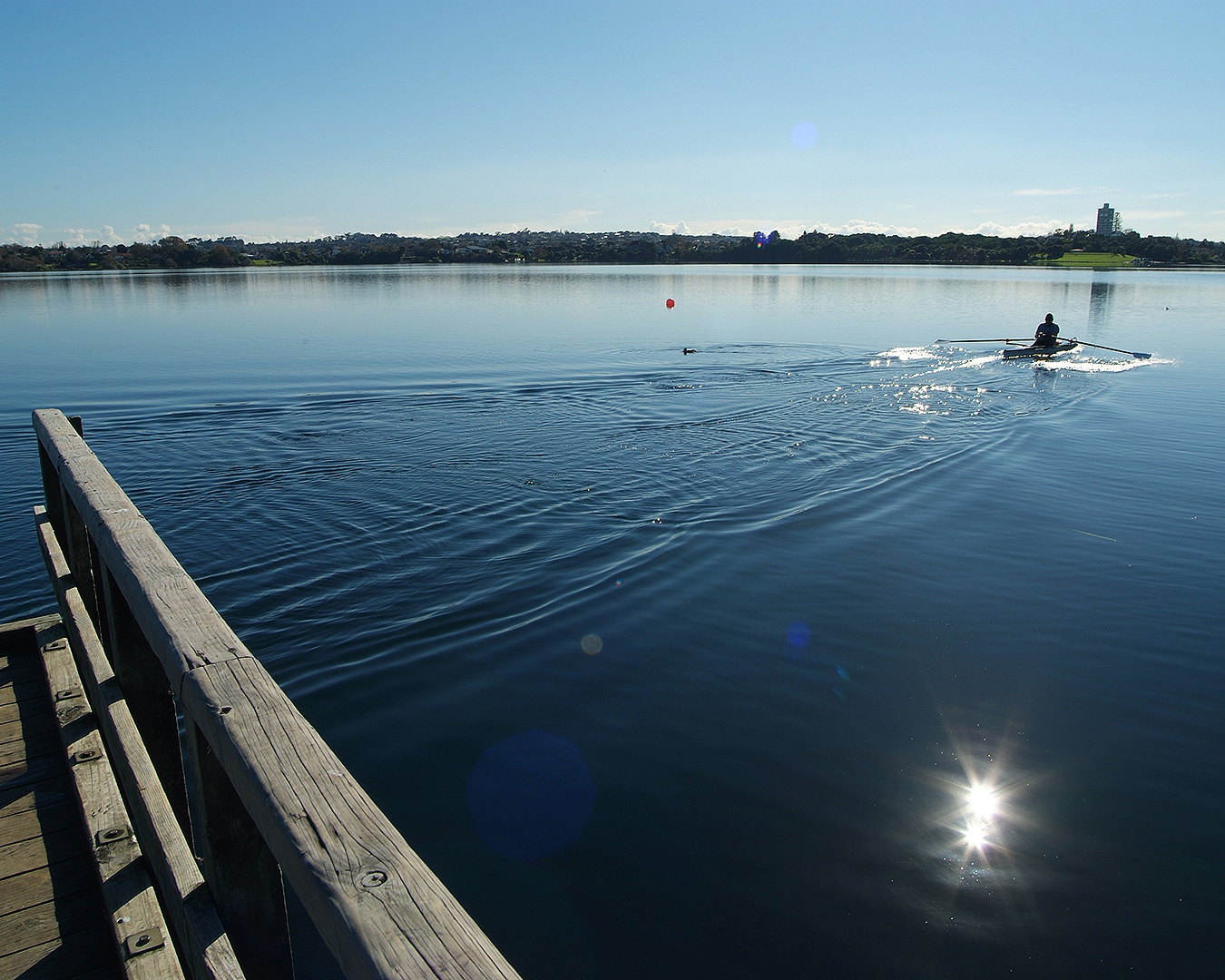 Maurice Gee’s beloved modern classic Under the Mountain has had both big and small screen adaptations, but central to them both and the story itself is Lake Pupuke, whose shores are where the Matheson twins Rachel and Theo stay with their aunty and uncle. The lake features often with the twins kayaking on it and feeling themselves drawn to the creepy Wilberforce house across the lake. Lake Pupuke is the oldest known volcano in the Auckland Volcanic Field and has five parks on its shores – Killarney Park (home of the Pumphouse Theatre); Henderson Park; Sylvan Park; Kitchener Park; and Quarry Lake Reserve meaning walking the circumference is possible even if some street walking is required. A popular place for water activities like kayaking, sailing, windsurfing, dragon boating and model yacht racing, Lake Pupuke is great to visit and see what drew Gee to make it such a focus of Under the Mountain.

Spend some more time in the great outdoors with these hidden baches to rent around Auckland.