9 Of The Best Running Tracks In Christchurch

Staying active is pretty important for our mental and physical well-being. There’s nothing quite like a run to help take your mind off things and fortunately, Christchurch has some of the most gorgeous tracks and trails in the country.

When you’ve been cooped up indoors all day, there’s nothing better than a bit of fresh air and a solid sweat session. Clear your head and get some vitamin D while you’re at it.

For a completely free workout, lace up your running shoes, put in your earbuds and head outside to explore the absolute best running tracks in Christchurch. If running's not your thing, you can always head out for a leisurely stroll as well. If you're after some more inspo click here to see a map of tracks around Christchurch.

If you’re looking for a place between the pines, Bottle Lake Forest is a 1000-hectare pine forest, conveniently nestled between Spencer Park to the north and Parklands to the south. The ten-kilometre track is mostly flat, but if you’re feeling extra fit, you can trek up and down the sand dunes.

Many new buildings have been constructed and plenty of landscaping completed along the Avon River, perfectly highlighting its beauty in the central city. If you’re based centrally, a great starting point is Victoria Square. Start here, and then wind through the city along Oxford Terrace, Cashel Street and Latimer Square. If you’re after a longer route, you can head to the surrounding suburbs of Avonside, Wainoni, Avondale, Aranui and Bexley where the river merges with the estuary and incoming tide.

One of our favourite walking tracks, Rapaki is the ideal spot for those who like walking or running uphill. The path rises about 250 metres and has recently been resurfaced so it’s challenging without being too treacherous. 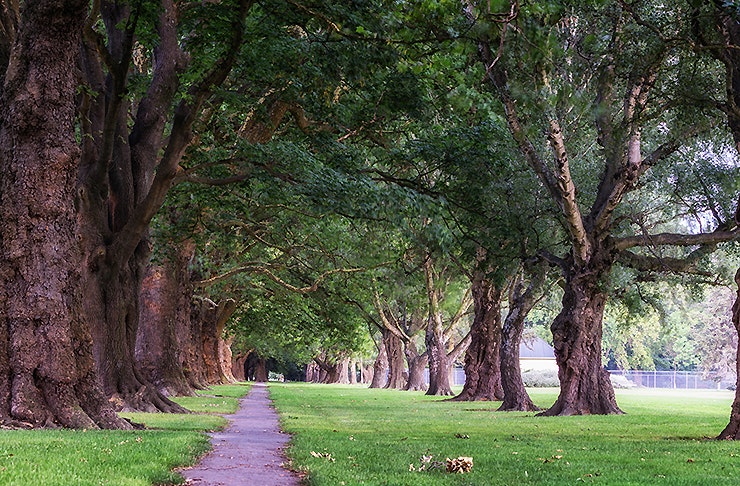 Hagley Park is the heart of the city and has been frequented by avid runners, walkers and cyclists since the 1850s. There are various paths and options circling both North Hagley (4.5km perimeter) and South Hagley (3.7km perimeter) so you can mix up your route every day. Take in the sights along the way from Christchurch Botanic Gardens, Christ's College and the Canterbury Museum.

A park on the fringe of the city, Halswell Quarry is full of walks and historic sites. There are a number of lovely walking tracks throughout Halswell Quarry, some even offering panoramic views of the Southern Alps that take you above the quarry while others meander through wetland. Stop and admire the six Sister City Gardens, small collections showcasing six of Christchurch's sister cities—Adelaide (South Australia), Christchurch (England), Gansu Province (China), Kurashiki (Japan), Seattle (USA), and Songpa-Gu (Korea).

There’s nothing better than getting some sand beneath your toes. Start your run anywhere north of Southshore and you'll have an open expanse of beach all the way to the Waimakariri river mouth. Location: Along the coastline, east of the central city. We recommend starting at New Brighton Pier. 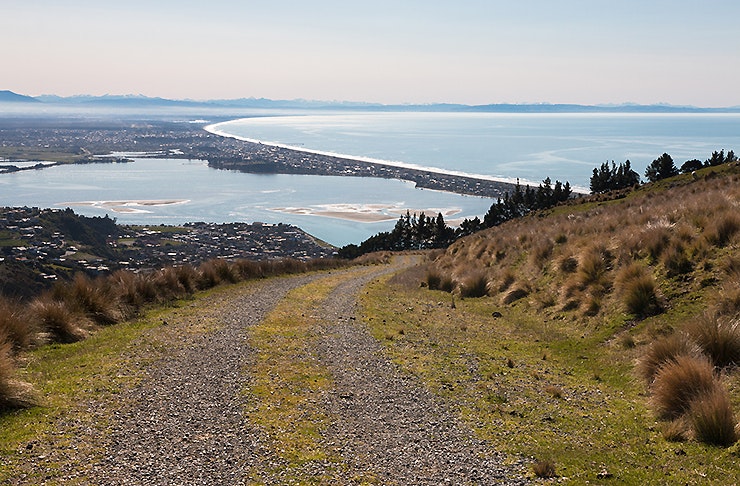 A Port Hills landmark, Sugarloaf’s peak is topped by a 120m television transmission tower. Start at Dyers Pass Road, from the Sign of the Kiwi and within a short distance, head up to Sugarloaf on the Lyttelton Harbour side. The track passes through a diverse forest dominated by mahoe, five finger, tree fuchsia and kanuka. Several open rock outcrops offer broad views across the harbour. You’ll arrive at a signposted junction, choose Cedrics Track, which heads northwest and climbs Sugarloaf through tussock grassland. You’ll be treated to stunning views overlooking the city and Pegasus Bay. Finish by crossing the Sugarloaf car park to resume the run and descend to the Sign of the Kiwi.

A large recreational area on the Port Hills, Victoria Park is an excellent spot to enjoy panoramic views of Christchurch, the Canterbury Plains, Pegasus Bay and the Southern Alps. The main access points into the park are from Sign of the Takahe, the main Victoria Park car park, and Sign of the Kiwi.

Everyone’s done Bowenvale once or twice and it’s easily one of the best tracks in Christchurch. Start at the end of Bowenvale Avenue, follow the farm track through the valley and up through the grasslands. Alternatively, you can head towards the Victoria Park trees. You’ll end up at Summit Road where you can carry on to Sugarloaf for the best views or head back down to the base.

Find the nearest walking and running tracks to your home with this handy map.