Look Up, Here Are The Best Places for Stargazing In New Zealand

While the Tongariro Crossing is well-known as one of New Zealand’s best one-day hikes, it’s also an amazing stargazing destination. With its undulating landscape full of sulphurous lakes and set amongst the towering Ngauruhoe (Mt Doom), Tongariro and Ruapehu, Tongariro Crossing is best experienced without the crowds. Book a night crossing, which leaves around 2am and get ready for some serious stargazing. Your guided tour includes a headlamp and you’ll pass between shadows while the sky is blanketed in constellations before taking in the sunrise. It’s a stargazing experience you’ll never forget.

Auckland certainly isn’t the first place that comes to mind when we think of stargazing, but just 45 minutes north of the City of Sails is one of the country’s best destinations. Shakespear Regional Park is New Zealand’s most accessible open sanctuary. It’s completely pest-free, integrating conservation, recreation and farming. While there aren’t any guided tours, the park is open to visitors 24 hours a day. We suggest a night trip to the lookout, where you will see an amazing sky above you. With Auckland’s skyline as your backdrop, it’s an incredible place to stargaze. 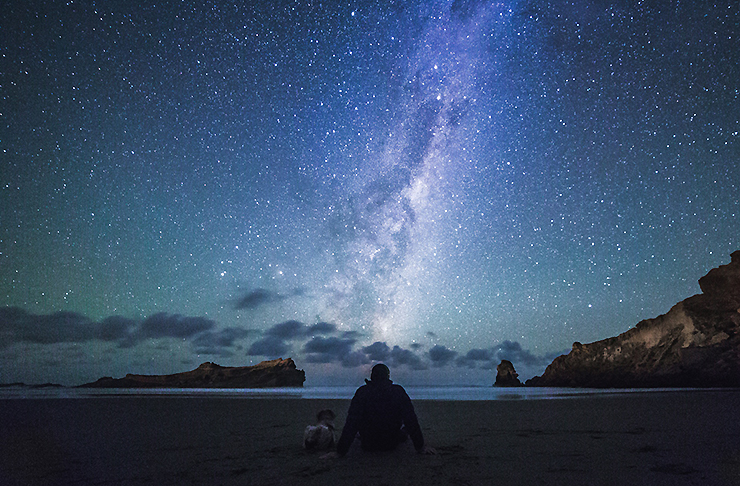 It’s like England’s Stonehenge but with a much better view of the sky. Just 1.5 hours from Wellington, Stonehenge Aotearoa can be found in Ahiaruhe in the Wairarapa district. While it isn’t a replica of the famous Stonehenge in England, the vision was to create a practical, open-sky observatory on a similar scale. Based upon the many stone circles and astronomical stone structures scattered around the globe, it’s a must-visit for stargazing and history buffs alike. While you're in the Wairarapa make a beeline for the Castle Point nature reserve where the above image was taken, you'll be blown away.

If you’ve yet to visit the amazing Zealandia Ecosanctuary, heading along for their night tour is an excellent excuse. The two and a half hour tour departs 30 minutes before sunset and is a fantastic way to get up close and personal with all the nocturnal critters that call the sanctuary home (including the native kiwi). It’s also a wonderful way to stargaze with red filter torches that won’t disturb the wildlife. There’s also very little light pollution, which is ideal for spotting constellations.

Without a doubt, one of the best places to stargaze in New Zealand is Aoraki Mt. Cook, which is the world’s largest international dark sky reserve. It’s the first to be awarded gold status, which means there is no light pollution at all. It’s quite possible to stay up all night long, gazing at the never-ending stars in the night sky. Stay in the region and walk out during the evening to take in the stunning canvas of constellations above. Book yourselves on an epic stargazing tour with Silver River. Their tours take place on 25,000 acres of farmland, all within the boundaries of the gold rated Aoraki Mackenzie International Dark Sky Reserve...aka some of the darkest skies in the world. 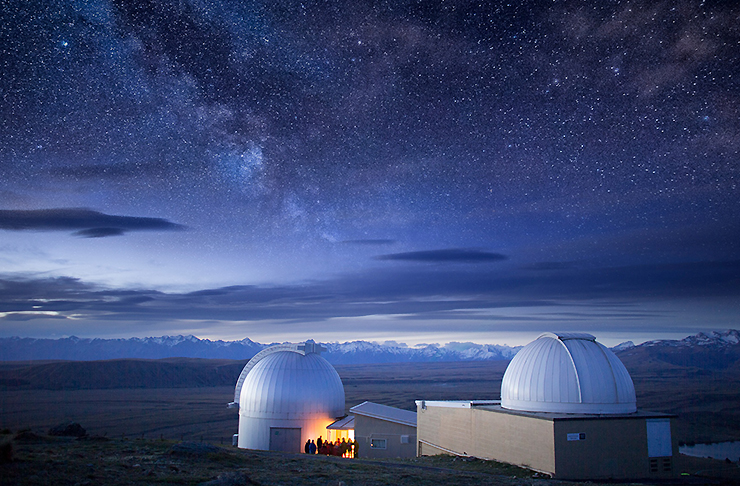 Also located in the Aoraki Mackenzie region is Lake Tekapo, which is famously known as one of the best places to stargaze in New Zealand (and the world). The night sky above Tekapo is truly magical and taking a trip to the top of Mt. John to visit the observatory will truly enhance your experience. Use the country’s most powerful telescope to spot up to 50 million stars. Book a tour of the observatory here.

If you like your stargazing with a side of adventure, head to Queenstown for some night skiing. The season starts in early July with night skiing taking place at Coronet Peak on Friday and Saturday nights. While stargazing while skiing probably isn’t your safest bet (plus the floodlights make it difficult to stargaze) you should be treated to some epic views as you head home after an evening on the slopes. Pull over at one of the viewing spots and take in the incredible night sky above Queenstown. If you haven't been to Paradise yet, making a trip to Glenorchy a must-do. Aside from the zero light pollution, the ancient forests are nothing short of breathtaking and when the stars are out, you'll be in for a celestial display unlike you've ever seen before.

Looking for more inspiration around our largest city? Here are the best places to stargaze in Auckland.