Welcome to Take A Bite, an all-new series where Urban List’s Tim Piccione eats a lot of Sydney sandwiches, picks his faves, then tells us about them.

I’ve recently rediscovered a timeless truth: sandwiches are incredible. In what is both an extremely obvious but appropriately layered joke, sandwiches are the greatest thing since sliced bread. To celebrate the simplicity of fillings between bread, my tastebuds and I are happily introducing Urban List’s new Take A Bite series, showcasing a bit of the best and most popular offerings from Sydney’s finest sandwich shops.

To kick things off on a delicious note, I’m taking you to Small’s Deli in Potts Point, where you can order a monster signature salad sandwich named the “Al Green”.

Ben Shemesh (ex-Dear Saint Eloise) and Emily Van Loon (a graphic designer by trade) opened up the European-inspired sandwich shop and deli in February of 2020, right before the world closed down. Going into lockdown two weeks after opening, the shop immediately found a devout local customer base for takeaway goods and remains a hot ticket spot for breakfast and lunch for those in the area.

Stepping inside the little townhouse shop and looking up at the menu board, you can’t miss the distinct French and Italian influence—soft and hard cheeses, plenty of cured meats, baguettes and paninis, and fillings fit for any authentic European deli. The pair were inspired by the specialty, made-to-order sandwiches they ate while travelling through Bologna.

“[There] it takes about half an hour to get a sandwich, but they’re slicing the meat per sandwich,” Van Loon explains. “That’s something that tastes incredible.” Luckily, the wait time is considerably shorter at Small’s, but with charcuterie and cheeses still freshly sliced daily.

On those travels, Shemesh realised that complex flavours and a dining experience could be presented in sandwich-form for a casual takeaway lunch. “That’s the thing we saw overseas–people doing really tasty things that just happened to be between bread as opposed to spread out on a plate.”

Now that you know the context let’s talk turkey (or, insert the plant-based version of that saying) and break down the signature sandwich of the hour.

Named after the American soul singer, the “Al Green” is a vegan delight that covers every shade of green imaginable, delivering a perfectly balanced range of flavours you never thought possible of a healthy salad sandwich. “I guess a lot of people don’t know about Al Green. So, I’m pretty sure they think we’ve just misspelled all green without one L,” Van Loon laughs.

One side of the towering panini sandwich begins with a generous lather of kale puree, made by blanching kale in salted water, then blitzing it with garlic and oil. The other side is covered in a green goddess sauce, consisting of kale and herbs folded through a soy mayo.

Next comes the alfalfa sprouts, the sliced granny smith apples, plenty of avocado, pepita pesto, and a fresh, crispy bed of iceberg lettuce holding it all together. Topped off with a house lemon dressing, tightly wrapped between deli paper and cut in half ready to eat—make sure you attack this monster with room in your stomach and joy in your heart. 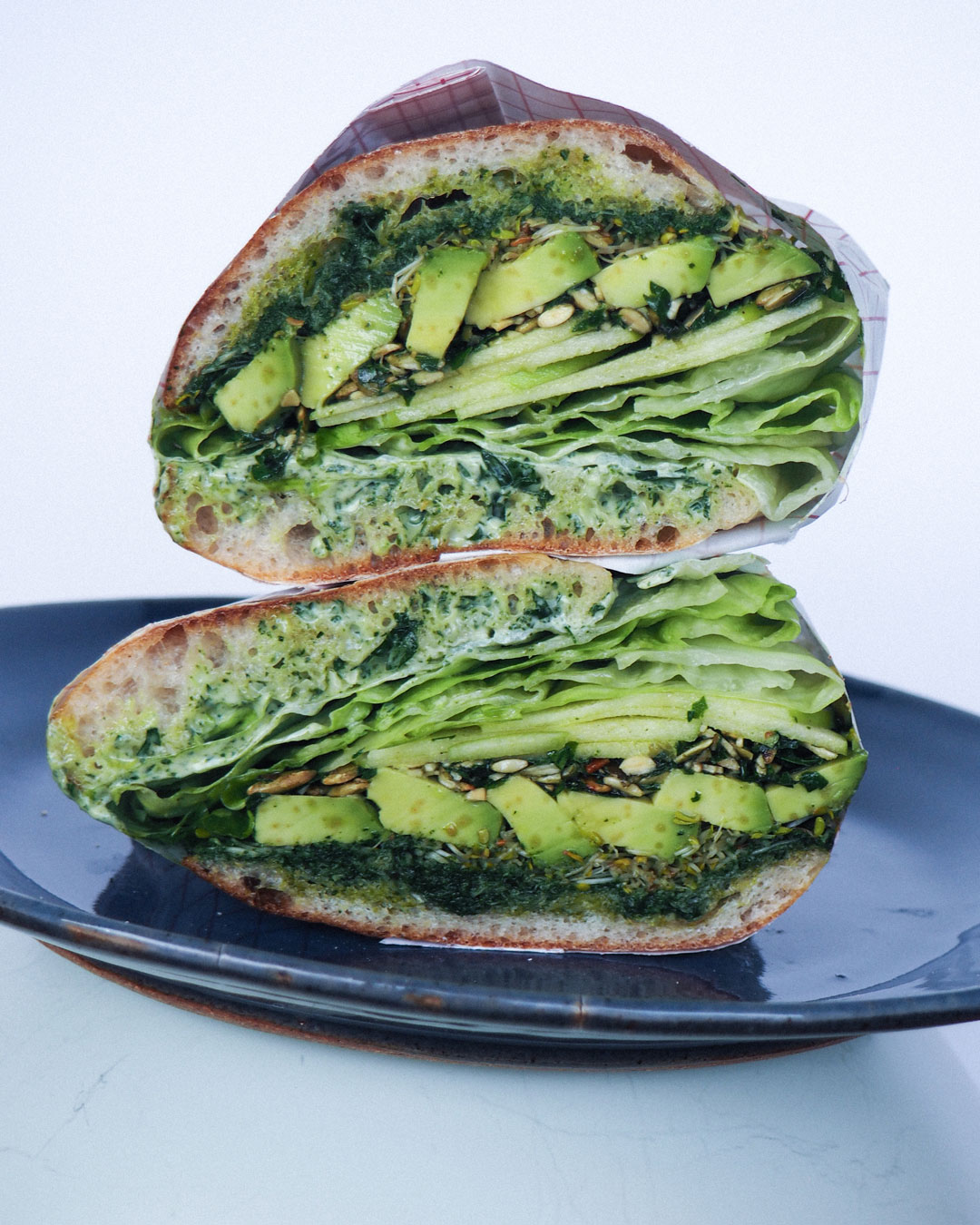 I can taste the Al Green flavours as I write this—triggering some kind of salivation-inducing, taste-zone memory activation on my tongue. The garlicky, salty kale puree, balanced with the sweetness and acidity of the apples and lemon dressing, and the soft avocado played against the crunchy pepitas and fresh iceberg lettuce.

A friendly tip from the Small’s Deli owners: don’t fear the fruit. “Some people have a weird thing about having fruit in a savoury dish, which is fair enough,” says Shemesh. “But it’s the most interesting part, and it cuts through everything else.”

The irony of a meat and dairy-free sandwich being the most popular offering at a deli isn’t lost on its creators. “It’s the least obvious sandwich for a place like this,” explains Shemesh. “I think having a vegan option is always an afterthought, and it’s usually not the tastiest thing on the menu.” In this case, that option is front and centre and adored by locals, rather than relegated to the bottom of the board and intended to appease the few.

But nothing is ever fixed in this flavour-filled hole-in-the-wall, and you’re always welcome to jazz up your Al Green.

“It’s a ‘choose your own adventure’ because it’s vegan, but you can add ham, salami, cheese, and whatever else you like,” says Shemesh. If you need a recommendation, Van Loon and Shemesh offer up the "Holy Trinity" of cheddar, ham, and chilli for optimal results.

If this sandwich has made an impression on you, you can likely guess the quality of other menu options. Pop through before 11am to get your hands on the freshly toasted Iggy’s Bread Croque Monsieur and a coffee made with Reuben Hills beans. Other staple sandwiches include the "Florence & the Aubergine" with finocchiona (fennel and garlic salami), eggplant, walnut paste, creamed pecorino cheese, and rocket. Or the "Mere Catherine" with brie, serrano ham, and butter on a baguette, named after the French restaurant that previously called the Potts Point building its home for 45 years.

The walls are also lined with house-made jams, sauces, and pickles for sale.  Then there are sandwich-perfect specialty items you’ll never find at your regular supermarkets like Lulu’s Remedy anchovy chilli, Ortiz Sardines, Quinby’s Chilli Honey, or Taluca Park eggs from the Southern Highlands.

Small’s Deli is small by name and by nature, but it’s the last way you’d describe the shop’s signature sandwich. Next time you’re in Potts Point, make certain you pop through for an Al Green.

More info on Small's Deli, including opening hours, is here.

Looking for dessert? Here's where to find Sydney's best tiramisu.