From the classic ‘What looks good?’ to the inevitable ‘How big are their meals?’, the eye rolls and hanger pangs are an official non-issue at the nearest sushi train.

Park your pals at a track-side table: Brisbane’s best sushi trains are about to round the corner. Next stop: Stack City. Climb aboard.

It’s a name, a state of mind, and a damn fine entrant into the list of Brisbane’s best sushi trains. Miso Hapi is known around West End for its ramen, but let’s face it: that food baby isn’t suited to a productive day in the office. For a feed just as good, check out Miso Hapi’s delicate selection of hand rolls layered with salmon, avocado, and soft shell crab (to name a few).

Tucked away in the leafy ‘burbs, sushi fans can discover a small slice of Kyoto in Rosalie. Moga takes its inspirations from the classic, timber-panelled dining halls of Honshu city, and serves it up with a frothy Japanese beer and a generous helping of izakaya. Swing by this sushi train location for plates on plates on plates of flamed salmon, crispy tempura prawns and yakitori cooked on the coal-fired robata grill.

From its humble beginnings in the streets of Logan–and you best believe we funded half their rent with our karaage orders–Wara Sushi has climbed the ranks of Brisbane sushi trains quicker than you can say ‘Irasshaimase!’. Today, you can find stacks on stacks of Wara’s sushi at Newstead’s Gasworks, plating up rolls the size of your head, and nigiri worth crossing the city for. 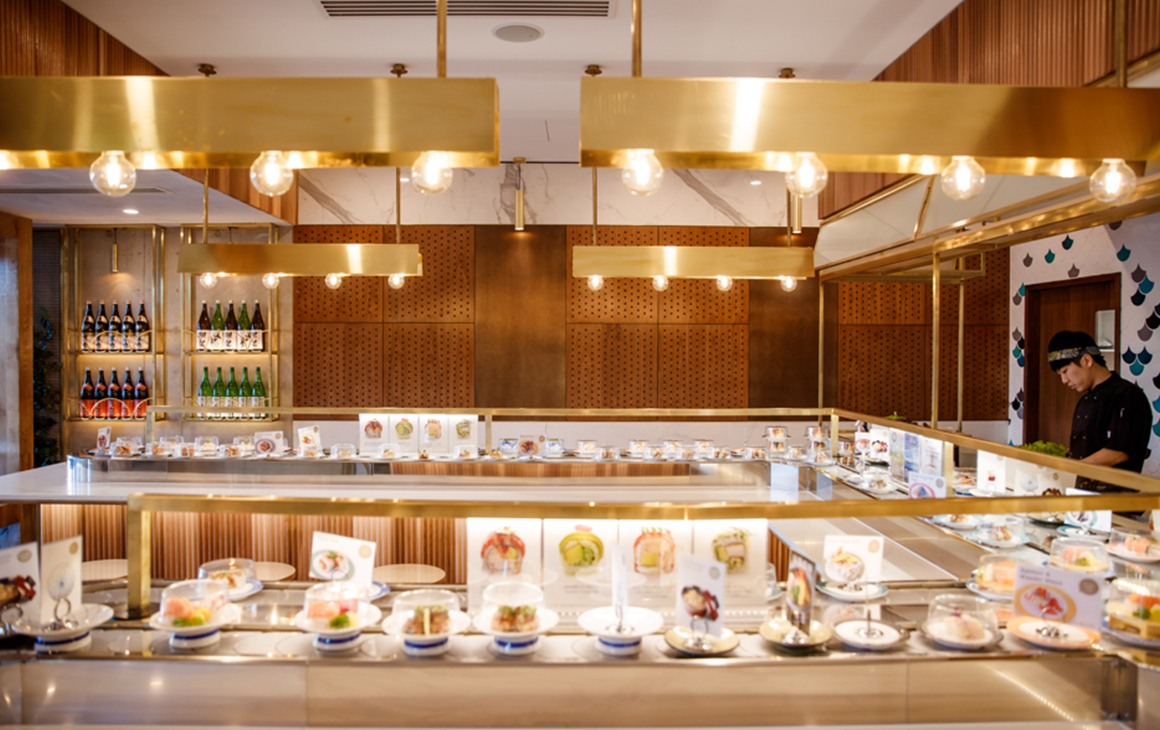 After sweeping through Melbourne, Sushi & Nori has made waves at Bowen Hills’ King Street foodie precinct. Their mantra is fresh and simple, focusing on the three elements of good sushi: fish, rice and nori. Park yourself at the station for some of Brisbane’s best sushi train plates, with a focus on daily, seasonal seafood. You’ll spot modern flavours like truffle tuna tartare, melt-in-your-mouth sashimi, and tempura soft shell crab.

After saving half the city from pre-movie hanger pangs, Ginga has earned a name as one of the top-notch cheap sushi trains in Brisbane. With locations beside South Bank Cinemas and within the Valley’s Emporium, it’s a no-brainer for a quick meal without wrangling friends to agree on a menu. Hot tip: if you’re in the area and need a quick lunch, you can grab plates off the train for a quick takeaway fix.

It’d be a safe bet to say you’ve encountered the lines queueing outside Sushi Edo at one time or another. With locations in Newmarket, the CBD and the Barracks (ka-ching!), Sushi Edo’s gaining a fast reputation for its cracker sushi train menu. Bonus: all plates are $3.80, so wear your stretchiest sushi pants and grab at those plates of aburi with reckless abandon.

Over 25 years ago, Sushi Train changed the game for good, bringing a new level of feasting to Australian diners for the first time. If you’re a fan of sushi (or simply don’t enjoy waiting for your meal), it’s safe to say you’ve probably encountered this team before. With dozens of locations around the state, Sushi Train’s a no-brainer for quick, cheap sushi train feasting with spades of nigiri, aburi and rolls to choose from.

Need to burn off that third plate of karaage? Check out our breakdown of Brisbane kayaking adventures.