With mind-blowing food, the kindest people we’ve ever come across, more history than you can poke a stick at and a booming cafe scene, it’s hard not to fall in love with Istanbul from day one. The perfect mix of history and modern-cool, you can go from fifteenth-century architecture to knocking back single-origin ethically sourced coffee in the space of a few minutes. While there’s no denying this huge city, home to more than 15 million people, can be hectic at times, that just makes discovering the little pockets of peace and quiet all over the city even more rewarding.

Here’s everything you need to eat, drink, see and do in Istanbul.

Where To Eat In Istanbul

Van, a city in eastern Turkey, is famous for its huge breakfasts and the crew at Van Kahvalti Evi have done us all a favour by bringing it to Karaköy in Istanbul. Picture a table overflowing with plates of cheese, olives, eggs, bread, tomatoes, cucumbers, pepper paste, honey, dips and more and it’s not hard to see why there are often queues out the door of this breakfast haven on the weekend. Go during the week or arrive nice and early and be sure to wear something loose, you’ll need the extra room. 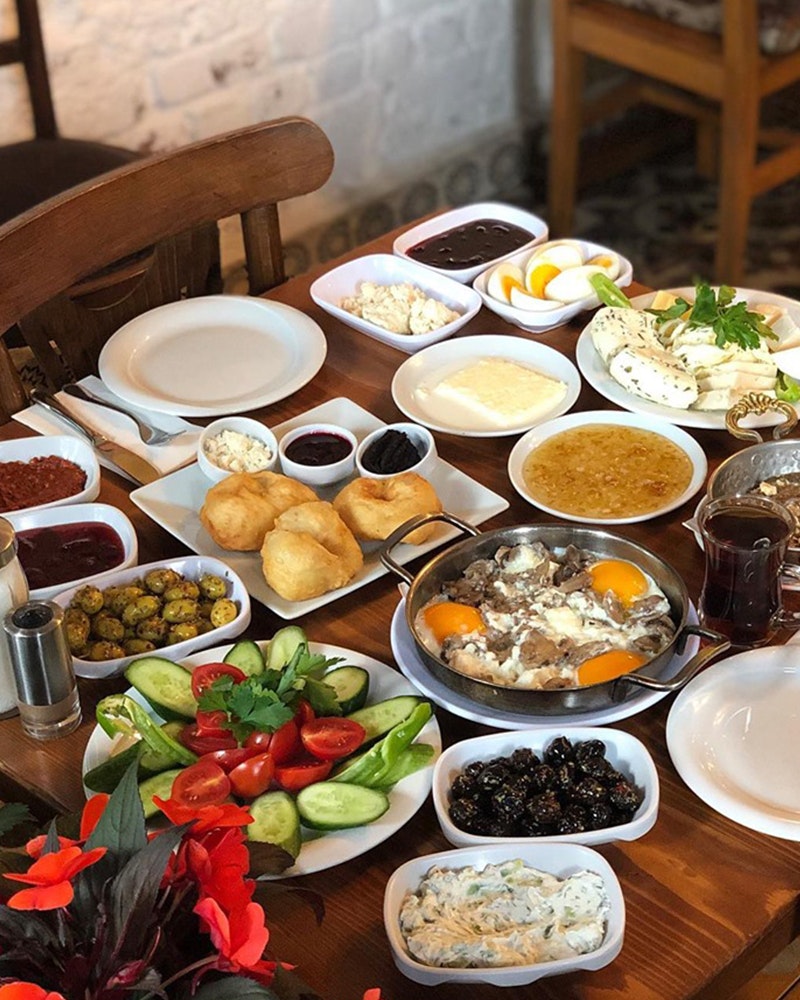 The Turkish love their meze (tasting plates) and Galata Kitchen in Karaköy does some of the best in Istanbul. They change up the dishes on offer each day but you can expect traditional meze options like dolmas, stuffed peppers, tabouleh, salads, dips and meats. There are plenty of options for vegans and meat-eaters alike, plus the staff tend to speak English so they can explain the dishes which is always a bonus.

Sitting pretty in Kadikoy on the Asian side of Istanbul, Ciya Sofrasi is absolutely worth the ferry ride across the Bosphorous Strait; even the producers of Chef’s Table agree with us on that one so do yourself a favour and watch season five, episode two before you go. You can either serve yourself meze and pay based on the weight of your dish or order off the menu. The meze selection is extensive and we’ve never tried a thing we didn’t like there, so don’t be afraid to pile your plate nice and high. From the menu, take your pick from the huge range of kebabs or treat yourself to some kunefe—a sweet, cheesy pastry—for dessert.

A little hole in the wall, Yoremiz whips up some of the best pide and lahmacun we’ve had the pleasure of tasting in Turkey. No idea what we’re talking about? Pide (pronounced pee-day) is a thick flatbread with toppings like meat, potato or cheese, while lahmacun (pronounced lah-mah-joon) is a thinner, crispier flatbread topped with meat, tomatoes, herbs and spices. Stop in here when you’re feeling a little peckish and grab one or more to eat as you stroll around Karaköy. 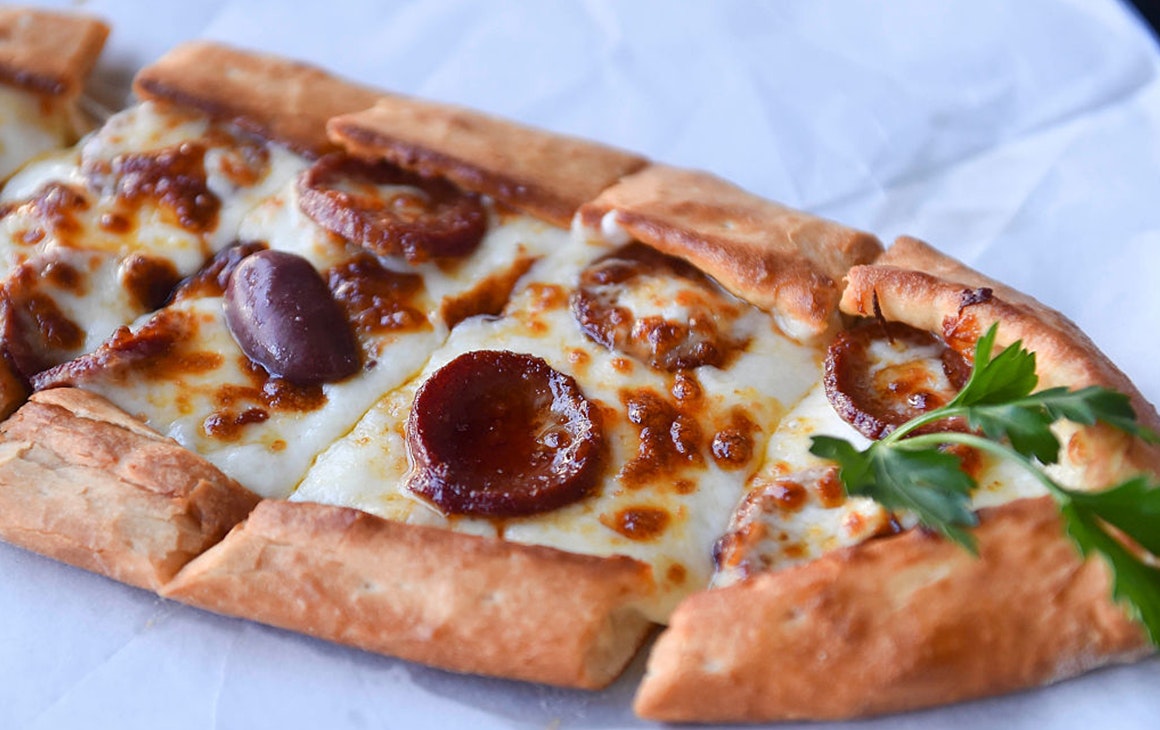 It might not be fancy but if you’re after jaw-dropping flavours and enough food to keep you going for hours, you’ll want to stop in at Dürümzade—a recommendation we got from the late, great and ever-trustworthy Anthony Bourdain which did not disappoint. Dürüm simply means wrap in Turkish so you can expect ridiculously tender and flavoursome meat which has been cooked over charcoal, wrapped in some of the best lavash bread going around. Order the spicy lamb and thank us later. If wraps aren’t your thing, you can also get plates of meat and tasty Turkish salads.

Where To Drink In Istanbul

Karaköy is just about bursting at the seams with fantastic speciality coffee shops, but Tiyop gets a special mention as one of our favourites. They do espresso, filtered and Turkish coffee and they manage to do a damn good job at all of them. You can also get traditional Turkish breakfast—we’re talking cheese, olives, cucumbers, tomatoes, eggs and more—as well as a few pastries. It doesn’t hurt that the cafe itself is so beautiful you can’t help but want to spend a few hours amongst the indoor plants, natural light and strong wifi.

If you were planning on joining the queue at Galata Tower, save yourself some time and go and grab a drink at Anemon Hotel’s rooftop bar. While we’ll admit it can feel a bit pretentious at times, the view makes it well worthwhile to stop in for a drink around sunset.

If you want to leave the well-heeled tourists of Istanbul to hang out with the hipsters, Urban is the place to do it. You can sit outside amongst the plants in summer or cozy up inside in the colder months and soak up the laid back vibes while you sip on a glass of wine or a good ol’ Efes beer. It’s the perfect place to go when the hustle and bustle of busy Istiklal street becomes too much for you. 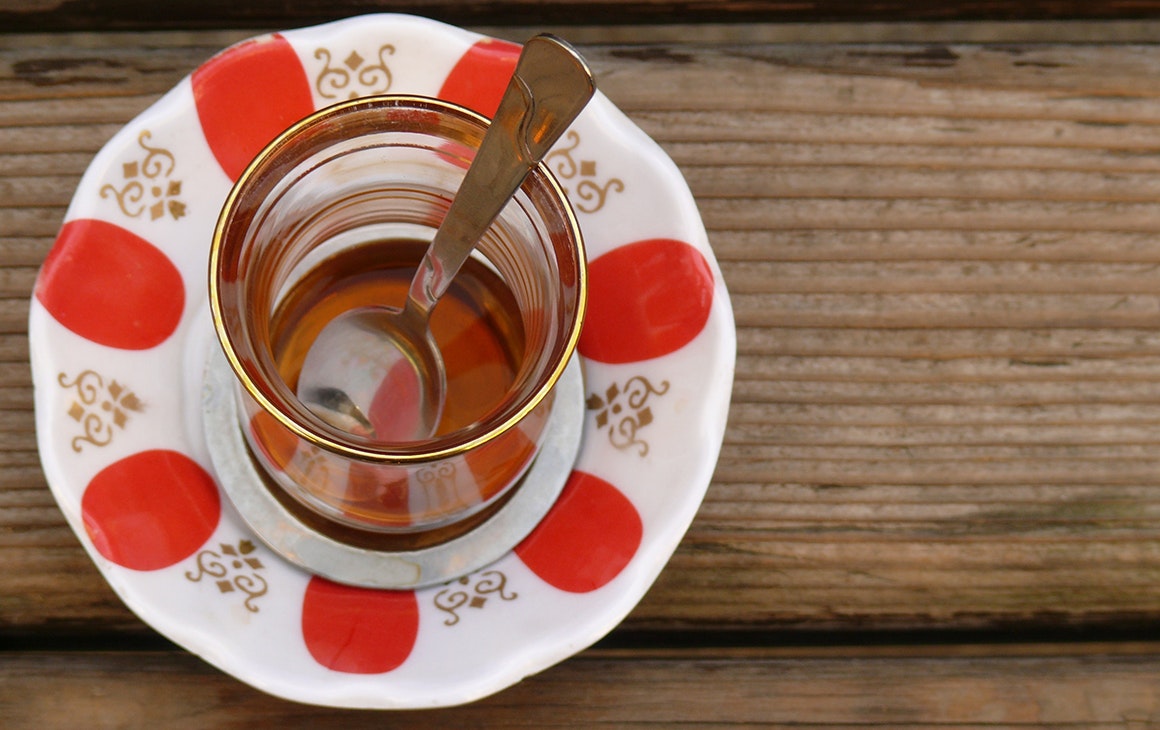 Great for coffee but even better for cocktails, Geyik is a must-visit in the Cihangar neighbourhood. They classify their cocktails as sweet, sour, smooth, strong or fresh so you can easily choose one that suits your mood. Get in early if you want to find a seat and watch out for the resident cats, you’ll want to bundle them up and take them home after a couple of cocktails.

While you might not expect a thriving jazz scene in Istanbul, Nardis Jazz Club would beg to differ. With bands from all over the world and performances every night of the week, it’s one of the best places to go for live music and reasonably priced drinks in Istanbul.

Nargile (shisha or hookah), tea and Turkish coffee are basically a religion in Turkey, so it’d be rude not to stop in at one of the many nargile cafes in Tophane and sample all of the above. There’s not a lot to differentiate one cafe from the next so take your pick and settle in before choosing your flavour of nargile and knocking back one or five cups of tea.

Things To Do In Istanbul

There are a few must-do tourist activities in Istanbul and you’re probably aware of most of them even if you’ve never been. The Blue Mosque and Hagia Sofia each embody some of the most amazing architecture you’ll lay eyes on in Europe. Go early to enjoy the peace and quiet in Sultanahmet Square and enjoy these beauties from the outside, then watch as the tourists rush in at opening time. While a visit to Topkapi Palace is not bad (though we think Dolmabahce Palace is a better way to spend your time and money), a wander through the park next door, Gülhane Park, is a must. It’s one of the biggest parks in Istanbul and it’s also the oldest, but most importantly it’s the perfect reprieve from the hectic Sultanahmet Square. 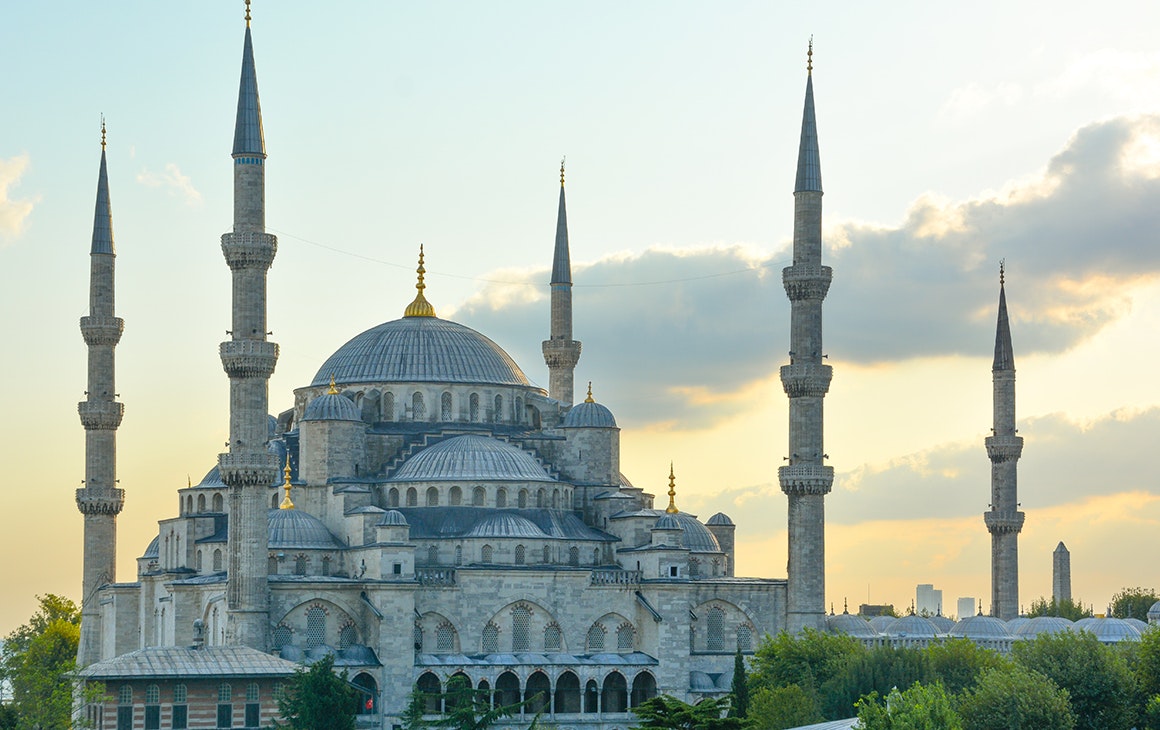 Don’t forget to hit Suleymaniye Mosque also, it’s more impressive than the Blue Mosque in our opinion and much quieter. It’s also nice and close to the Grand Bazaar so no doubt you’ll be in the area already at some point on your trip. Stroll up Istiklal Caddesi heading toward Taksim Square one evening. It’s as crowded as anything—up to three million people visit in a single day according to some stats—but you’ve got to experience it once.

Even if you’re not into shopping, a visit to Istanbul’s Bazaars is non-negotiable on any trip, no matter how short. The Spice Bazaar is full of the best lokum—Turkish delight, but not as you know it—dried fruits, nuts, teas, spices and plenty of other bric-a-brac. You’ll be able to taste just about everything on offer and you’ll be blown away by the quality of it. The Grand Bazaar is Istanbul’s oldest (going strong since 1461) and most famous bazaar. There are over 4,000 shops inside and 22 entrances, so you’d be right in assuming it’s easy to get lost in the maze of alleyways. Whether you’re shopping for carpets and furniture, jewellery and leather or anything in between, you’ll find what you’re looking for in here. Don’t forget to haggle and enjoy a spot of tea with the shop keepers before buying anything. Far less famous and much smaller in size, Arasta Bazaar is also worth a look in while you’re in Sultanahmet Square. It sells similar wares to the Grand Bazaar though some say the quality and prices are better here. 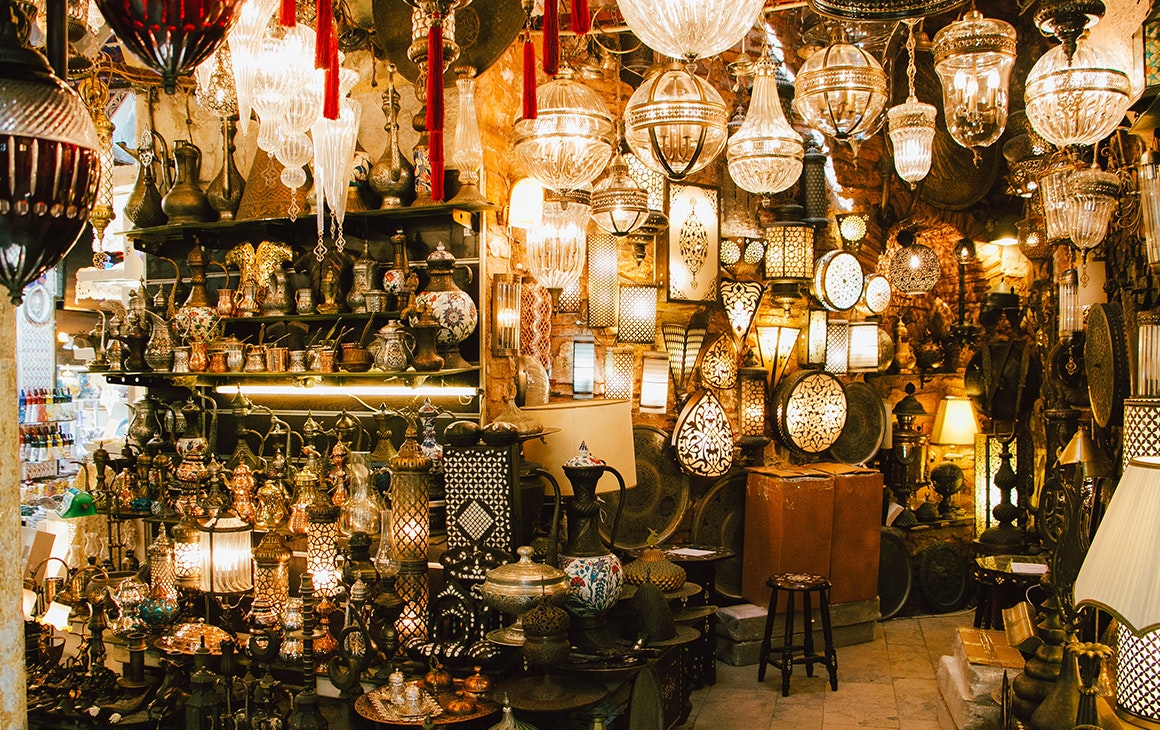 Watch The Sun Set Over Europe From Asia

The best sunsets in Istanbul are from the Asian side of the Bosphorous Strait, so you can watch as the sun sets behind Istanbul’s most famous sights. Get the ferry or the metro over there and head to one of the many cafes lining the coast in front of Kiz Kulesi (or Maiden’s Tower). If you’ve got cash to splash and like to do things the fancy way, head straight to the restaurant at Kiz Kulesi which is on an island in the Bosphorous Strait so you’ll get views of both the Asian and European sides of Istanbul. 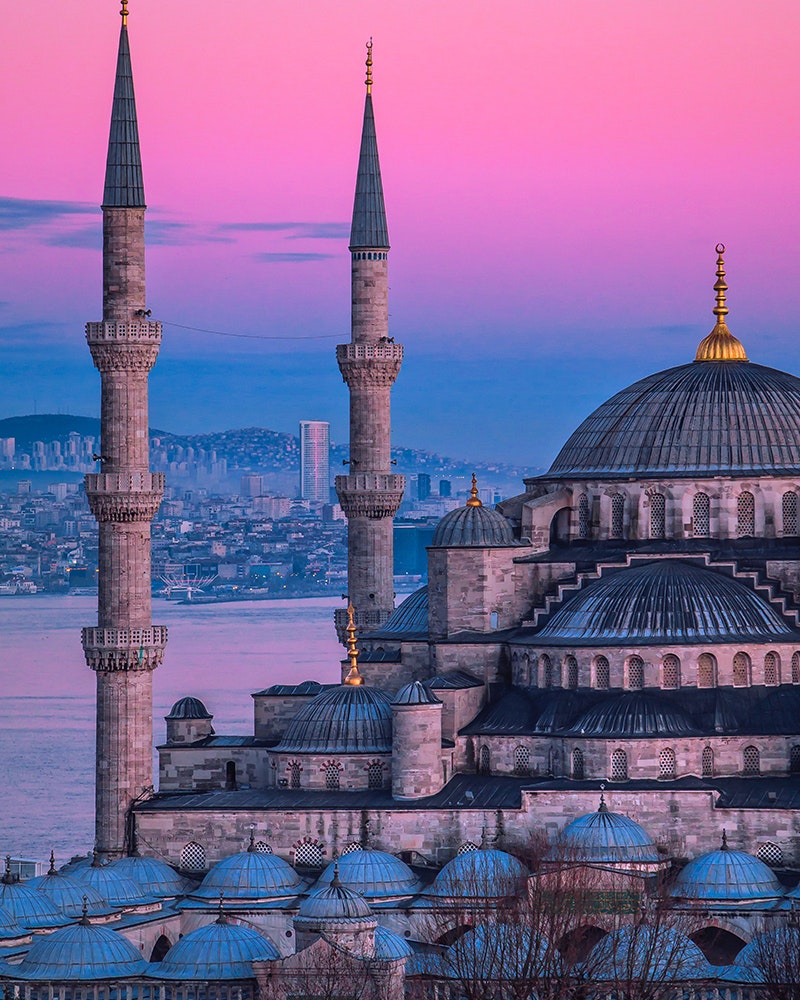 No matter what you feel like, Turkey’s street food scene has got you covered when you’re feeling peckish. Think stuffed mussels, corn on the cob, roasted nuts, simits (a round bread not too dissimilar to a sesame bagel, often loaded with a good smearing of Nutella), dondurma (Turkey’s sticky ice cream which is surprisingly delicious) and you’re starting to get the picture. There’s also lahmacun and pide which we’ve already mentioned and, of course, the tried and true doner kebab which never fails to hit the spot after a couple of drinks.

The Whirling Dervishes perform a magical, entrancing ‘dance’ which is actually a physical form of meditation. The dervishes wear long robes and as they spin around to the beat of the music the robes rise and take on a mind of their own. If you happen to be seated above, watching the robes spin is completely mesmerising. If you’re on ground level you won’t be able to take your eyes off their feet. The practise originated in Konya in central Turkey but if you can’t make it there, you can catch a show at the Galata Mevlevi Museum in Istanbul every Sunday. 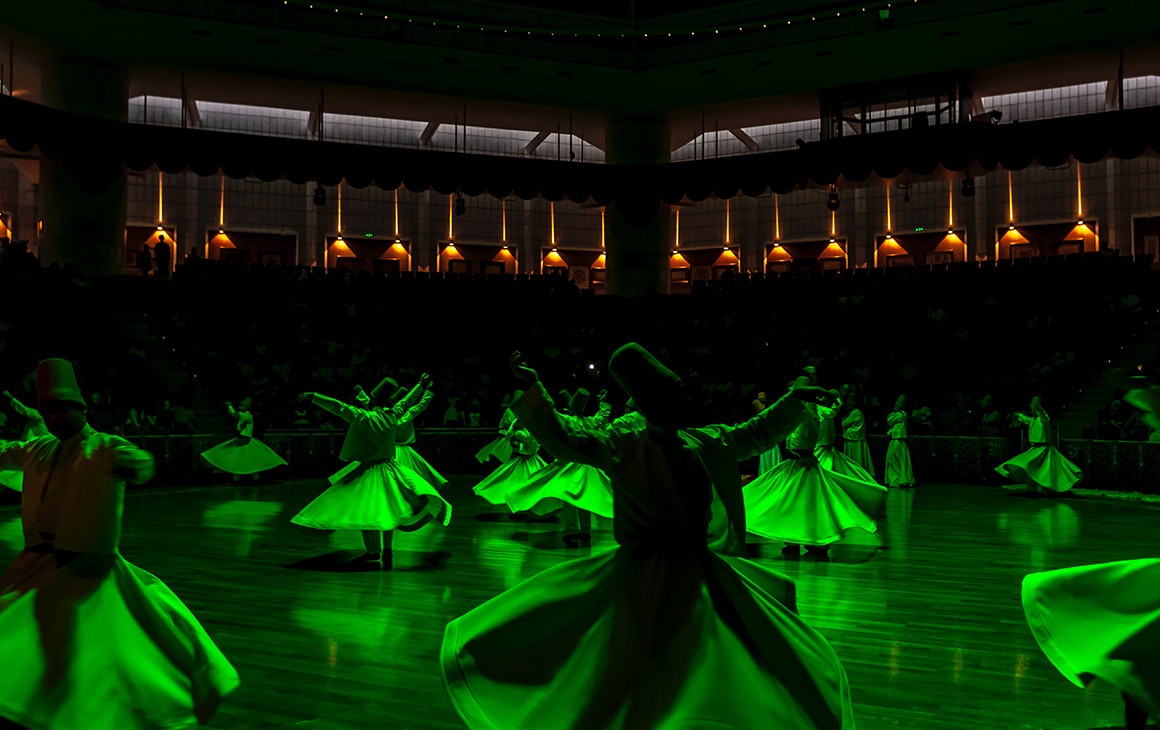 Where To Stay In Istanbul

Istanbul is a big place and a lot of people choose to stay near Sultanahmet Square to be close to the main tourist attractions like the Blue Mosque and Hagia Sofia. While there’s nothing wrong with that, we’d recommend heading over the Golden Horn to the Beyoglu district—Galata, Karaköy and Cihangir are good places to look—which is full to the brim with the best cafes, bars, boutiques and all of the bohemian vibes.

Airbnbs are aplenty and offer serious value for money, but if you want to treat yourself, check out Inqlusif in Galata. With seriously stylish rooms, an amazing coffee shop downstairs and an unbeatable location, there’s a lot to like about this boutique hotel. You can’t go wrong with any of the rooms, but we’re pretty into the Orange Room with it’s chilled out vibe, local art, uber-comfortable mattress and luxurious Turkish linen.

Next up, it's time to tackle Dubai. Head here for an epic bucket list of things to do.