10 Of The Best Volcanoes In Auckland To Climb

If you’re anything like us, your resolution to get fit may seem like an uphill battle—literally. But here in the City of Sails, we’re lucky enough to be sitting on a whopping 53 volcanoes, and they all offer striking views of our wonderful city.
While Auckland’s volcanoes may be considered dormant, you don’t have to be. With most Maunga now being closed to cars, it's even more rewarding to visit these sacred places and to be honest, we now have a burning desire to climb all of these babies. So to add a little spark to your world we’ve rounded up our top ten picks for you to get active at. Remember that once you get to the peak it’s all downhill from there.

Get your glow on and get up Maungawhau. At 196m it is the highest of Auckland’s volcanoes, but don’t let that put you off because it has arguably the best inner-city views. So let this be your motivation to push you through those long, sweaty ascents. Once you get to the top, survey New Zealand's biggest city from the new boardwalk around the crater complete with a viewing platform. Tip: If you want to look like a local then activewear is the only acceptable attire. While the divine Whau cafe is closed until international tourism resumes you can still swing by to pick up one of their legendary real fruit ice creams during the weekends (weather permitting).

To get the paramount panoramic views of our beloved city, New Zealand's youngest volcano Rangitoto is an absolute must-do. Walk the one-hour track through alternating lava rocks and native bush. And don’t forget to get sidetracked by the lava caves (check the link for up to date info). Take a ferry or charter a launch if you want to really ramp up your experience.

Don’t be sitting pretty. We get it; you may not have time to sail across for your chance to climb Rangitoto but Ohinerau Mt Hobson has stunning views of the island itself and takes half the time, so you have no excuses. 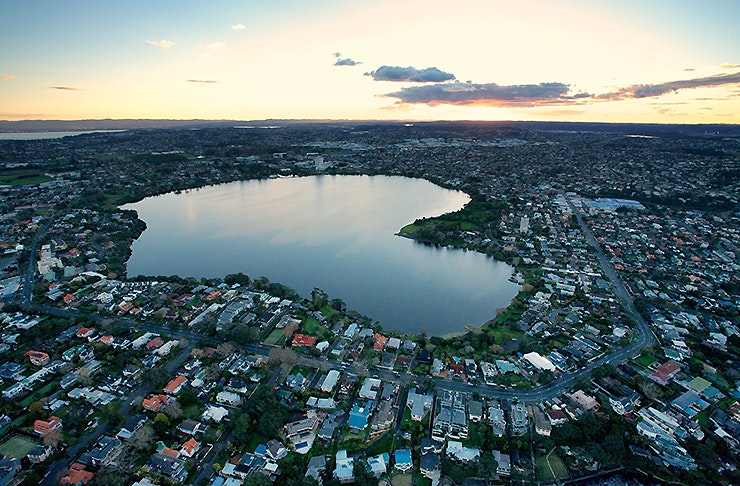 Heart-shaped Lake Pupuke has cooled down a bit since its explosive days which formed this crater lake. So if you’re looking for something slightly easier let’s just say there’s not much of an incline. Go for a scenic stroll around part of the lake, or take to the water and try a kayak.

We lava Auckland Domain—it’s got it all. Check out the museum (which sits on the crater rim) and maybe you’ll learn a little history about these fiery mountains. Why not spend the day there? Bird watch in native bush, warm in the winter gardens or swoon over those stunning sea views.

Our go-to city escape within the city, One Tree Hill emulates the countryside with cows and sheep, yet there’s no tree to be seen on its peak. Now the summit is closed to cars hoofing it up to the summit is cause for celebration (and a bit of sweat we'll be honest). Get lost in the crater-full park, let out your inner child because YES there is a flying fox or do some stargazing at 2pm in the afternoon at the Stardome Observatory and Planetarium.

If you feel so inclined, head to North Head to explore the old tunnels and armaments built but never used during war times. Take a torch and someone to hold your hand cause it can get pretty spooky in there, but it’s worth it because it’s totally lit.

Venture South to the 70,000 year old Māngere Mountain and not only will a huge LOTR-esque volcano greet you but you’ll also find magical views of Manukau Harbour. If you fancy a challenge, hike up what can only be described as the 'cleft' in the middle of the mountain to get to the summit, otherwise, take the more sedate circuitous route which will leave you (slightly) less puffed. Discover more about Māori lifeways at the visitor centre that's open during the week or maybe even sign up for a guided tour. Remember West is best in the evenings because, if you’re lucky, the sun will light up those skies in fifty shades of fire.

One of the best-preserved volcanoes ​and only accessible by water, Motukorea is one you probably haven’t thought to visit. Once home to the founders of Auckland Logan Campbell and William Brown you can get there with Auckland Sea Kayaks who offer a half-day tour. So what are you waiting for? Grab a date (be it a partner or a mate), enjoy some light refreshments at the peak, then paddle back to the city, bliss.

Surrounded by suburban slopes, Owairaka is a great place to make some new friends of the furry kind. If you are like us, absolute dog-obsessives, stroll around the summit in the early morning or evening and you’ll find many a dog to moon over.
Top off your active day by munching down on Auckland's best cheap eats.
Image credit: Chris McLennan, Lake Pupuke by Mark Meredith.