Grab The Glitter, These Are The Best Mardi Gras Events To Hit Up This Year

It’s one of the most, if not the most, significant events on Sydney’s cultural calendar—and you better believe a global pandemic ain’t going to rain on this parade. Yes, Sydney’s legendary Mardi Gras Festival has officially kicked off and there’s plenty happening around town for you to get your rainbow on and celebrate love, individuality, and the LGBTQI+ community.

For renowned Sydney Drag Queen, host of the Yass Queen podcast, and DJ, Timberlina, Mardi Gras is a super special time in Sydney. "Mardi Gras means so much to me, from celebrating everyone as individuals, to gaining and spreading awareness and knowledge—and most of all having fun!"

"I am so excited about the [2021] parade," she adds. "It is something we have never seen before; it will be amazing to see everybody still being able to come together and celebrate, and most of show all their colours!"

The theme for this year's Mardi Gras festival is "Rise", celebrating the idea of rising to the challenge of being our true selves and standing up for change—and that feels super relevant in the wake of 2020.

Read on for how to celebrate Mardi Gras this year and all the best spots to watch the parade.

Where To Watch The Parade 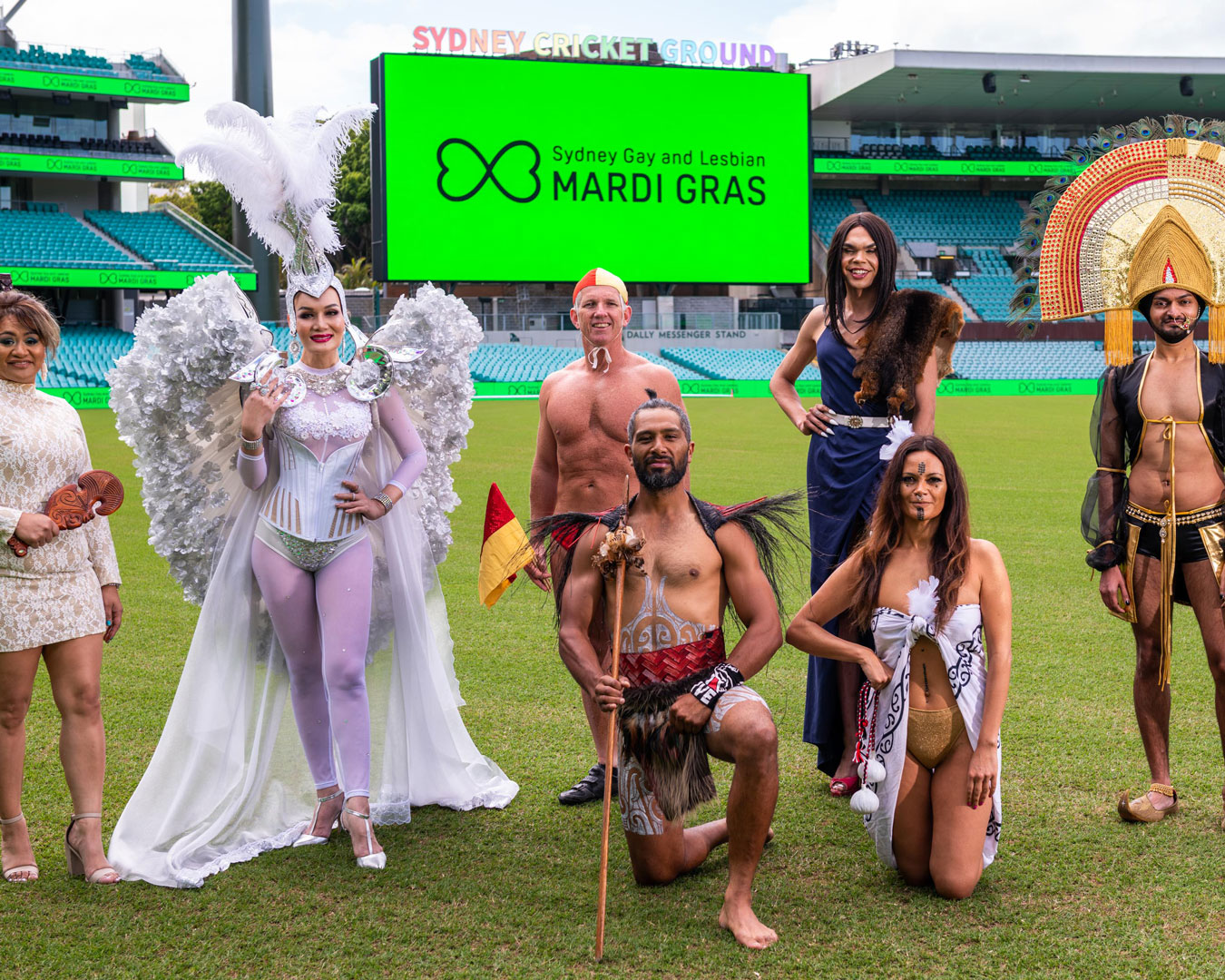 The iconic Mardi Gras Parade will leave its Oxford Street roots this year for a special one-off COVID-safe presentation at Sydney Cricket Ground on Saturday 6 March. Tickets are super-limited (an additional release has just been announced here). If you've missed out, don't worry—there are still plenty of ways to tune in—and get drenched in glitter.

SBS will be screening the parade (so you can absolutely have a Mardi Gras house party this year), and a bunch of Sydney venues are showing up with special screening parties for this essential-viewing spectacle.

With a bunch of queer entertainment alongside the live broadcast, like drag shows, comedy, live music, and DJs, our top picks would be The Bearded Tit, Bitter Phew, Cafe Freda's, The Oxford Tavern, The Lansdowne, The Beresford, and, of course, The Imperial in Erskineville.

The trans experience has become more and more visible in recent years—but trans and gender-diverse people are still vastly under-represented in the media and in popular culture. We're also often presented very streamlined and one-sided narratives too, like the coming out story, surgery, and discrimination. My Trans Story, now in its fourth year at the Mardi Gras Festival, aims to humanise gender diversity and shed a little light on the whole story, including the love, laughter, curiosity, exploration, triumphs, and hope involved in the journey of accepting your true self.

In the eternal words of RuPaul, "We are all born naked, and the rest is drag." While drag is a part of our national identity here in Australia thanks to the brilliance of Priscilla, Queen of the Desert, there's always more to the story. Like My Trans Story this discussion will dive a bit deeper on the drag experience, especially its rich history here in Sydney. You'll hear from local royalty Amelia Airhead, Cindy Pastel, Nana Miss Koori, Sexy Galexy, and Kiki Fetch. Snap up some tickets here. 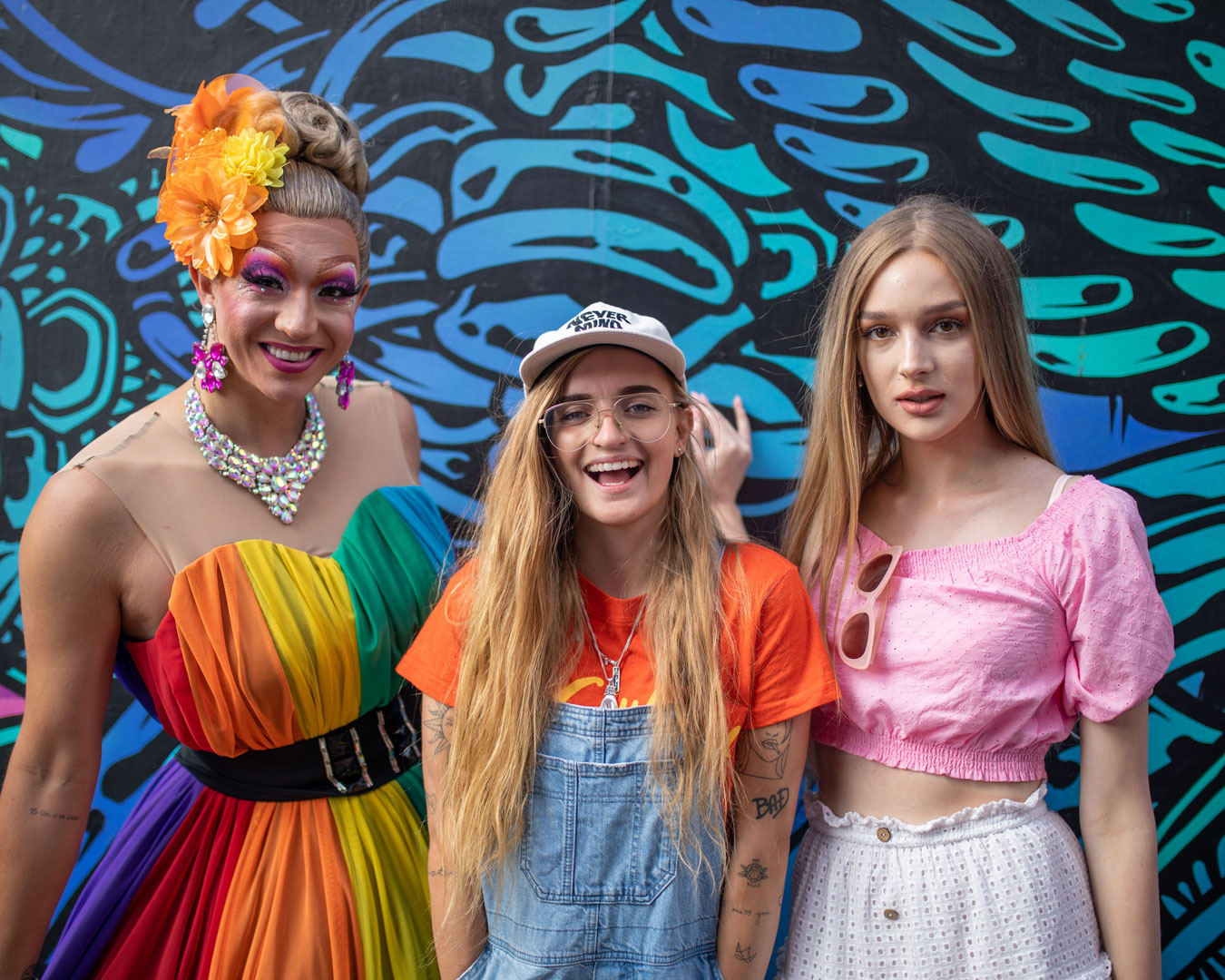 TikTok Australia will be hosting a live event to celebrate Mardi Gras with some of its key LGBTQIA+ creators on the platform. Hosted by Drag legend Courtney Act (@courtneyact), you'll see Tiktok superstar Lawrence Bing (@lawrence_bing) discussing trans visibility, reflecting on the important history of Sydney Mardi Gras, and sharing some of his favourite Mardi Gras memes, Emma Horn (@emmahorn) and Louis Hanson (@louis.hanson) talking about their own personal journeys, and a performance from the one-and-only G Flip. Tune in at 7pm on Wednesday 3 March @TikTok_Australia.

Playing across a slate of Sydney cinemas like Randwick’s Ritz Cinema, the CBD’s Event Cinemas, Cremorne’s Hayden Orpheum, and Centennial Park’s Moonlight Cinema, the festival will showcase over 90 different films. And for the first time in MGFF’s history, viewers Australia-wide can watch films online and on-demand from their homes. Jump over here for more info and to see our top picks of which films to head out and see.

Merivale X Absolut Vodka "We Are Stronger Together" 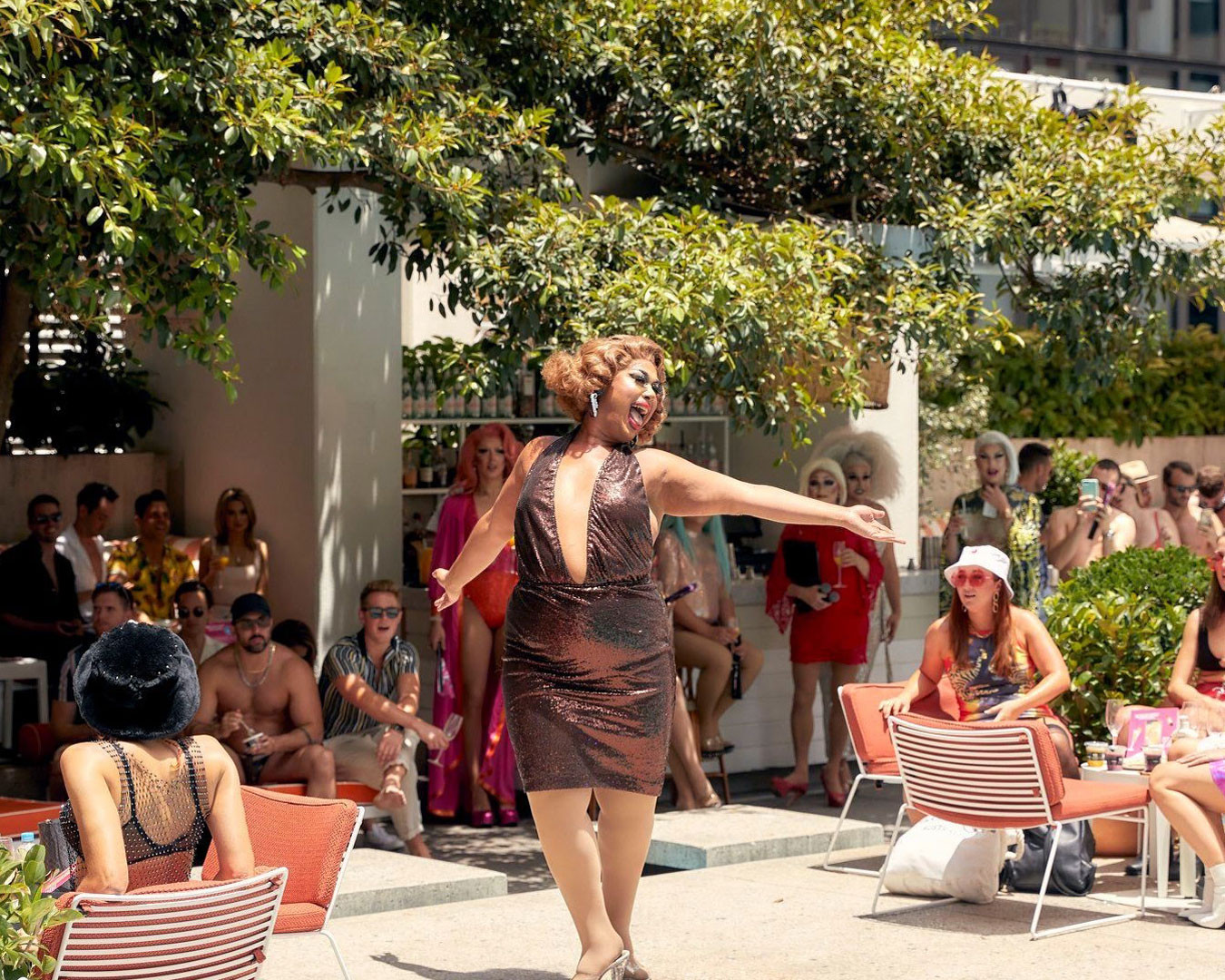 Hospitality juggernaut Merivale has buddied up with Absolut for an all-out Mardi Gras celebration titled "We Are Stronger Together". Basically, there's a bunch of great events happening across Merivale's long list of bars, restaurants, and clubs—and you can suss it all out here. Be sure to also order the "Absolut Banger" cocktail, a bright, vibrant mix of Absolut Lime, Lillet Blanc, passionfruit, and granny smith apple. It's available until Sunday 7 March and $2 from every cocktail will be donated to ACON and the Bobby Goldsmith Foundation.

Situated super close to the Sydney Cricket Ground, The Taphouse will be dialing things up for Mardi Gras, from its beloved rooftop to its groundfloor tap room. Doors open at 10am on Saturday 6 March (for anyone keen to get in on the action as early as possible), with drag bingo and a best-dressed prize up for grabs. As well as streaming the parade, you'll be treated to entertainment from Krystal Kleer and DJ Karmel Jäger throughout the night. 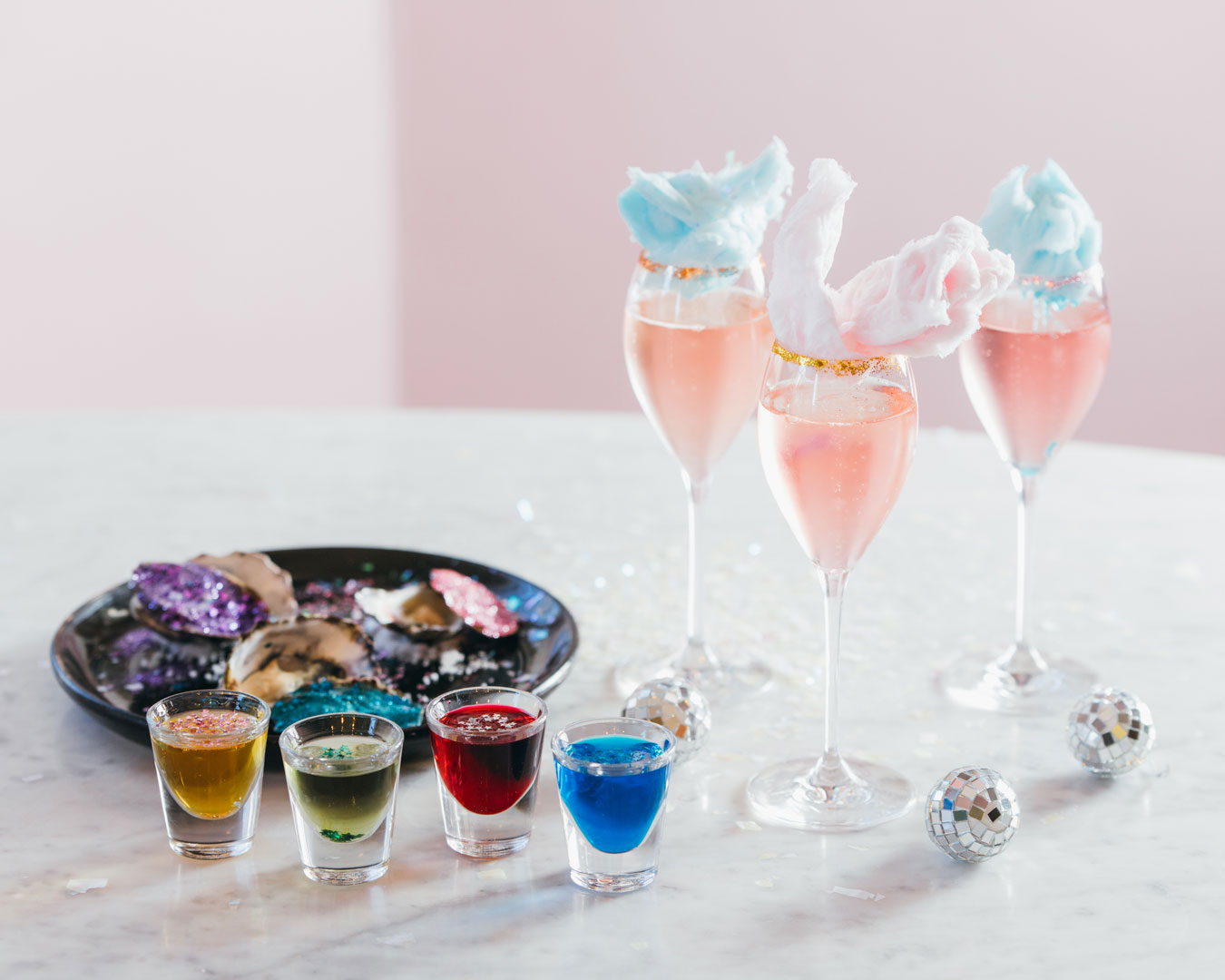 Paying tribute to its drag roots, Misfits is hosting a Mardi Gras eve party with the lot. A glitter station, queer classics blasted by DJ Enn all night, giant pink dollar bills, and the bar serving rainbow jelly shots and sparkling fairy floss cocktails (named "Disco Baby" and "Super Pie") are all set to feature. Doors open at 6pm and entry is free, so if you’re keen to celebrate ahead, this one’s for you. Bookings are encouraged, so click here.

Hop on into one of Home nightclub’s queen-sized beds for a night of interactive live music performances and entertainment. It might be a bit reminiscent of one of your childhood slumber parties, except this time, there are no rules, no lights out, and your night comes complete with champagne and bedside service. You’ll be able to opt for two shows—a night of comedy, cabaret, burlesque, and magic at CIRKUS BIZURKUS, or a sexy, gender-bending underground performance by PRETTY MASC. Scrap the quiet night at home celebrations this year and book tickets here.

For more ways to rock the rainbow now and always—check out Sydney's brand new permanent rainbow path or our fave drag shows.