Alright, South East Queensland's best country pubs. The rules are, if it’s got VB on tap, a gravy-loaded schnitty worth your weekly calorie intake or a cosy fireplace—we rate it.

Country pubs are the bee’s knees and it’s not just because they know a thing or two about plating up wholesome feeds. It’s because they ooze that all-Aussie no-frills air you simply can’t dig up anywhere else. They’re all about supporting local producers, brewers, and musical talent plus, they never fail to reel in a crowd that serves up some solid bants.

Jump in the car, here are the best country pubs near Brisbane to visit this winter.

If you’re looking for old school pub vibes on the Queensland coast, look no further than The Apollonian Hotel. The historic colonial-style structure has been a social hub since the 1860s, but was relocated in the ‘80s to its idyllic location on the shores of Lake Cootharaba. Pull up a chair at one of the tables out on the lawn, grab a cold beer and a plate of wood-fired pork, salads and damper, and relax and enjoy the sunshine. If you’re lucky, the pub proprietors and their family might kick off a game of footy for all the guests brave enough (and not too full) to join in.

For an English country pub experience worthy of an Agatha Christie novel, set your sights on the Fox and Hounds Country Inn. Nestled at the base of Tamborine Mountain, this iconic pub is packed from floor to ceiling with fittings from England’s 18th century Sussex Arms Hotel. Talk about authenticity. But the true Agatha-Christie-experience isn’t complete without a murder mystery night, which you can book for groups of 12-50 people. Detective Poirot is on the case. 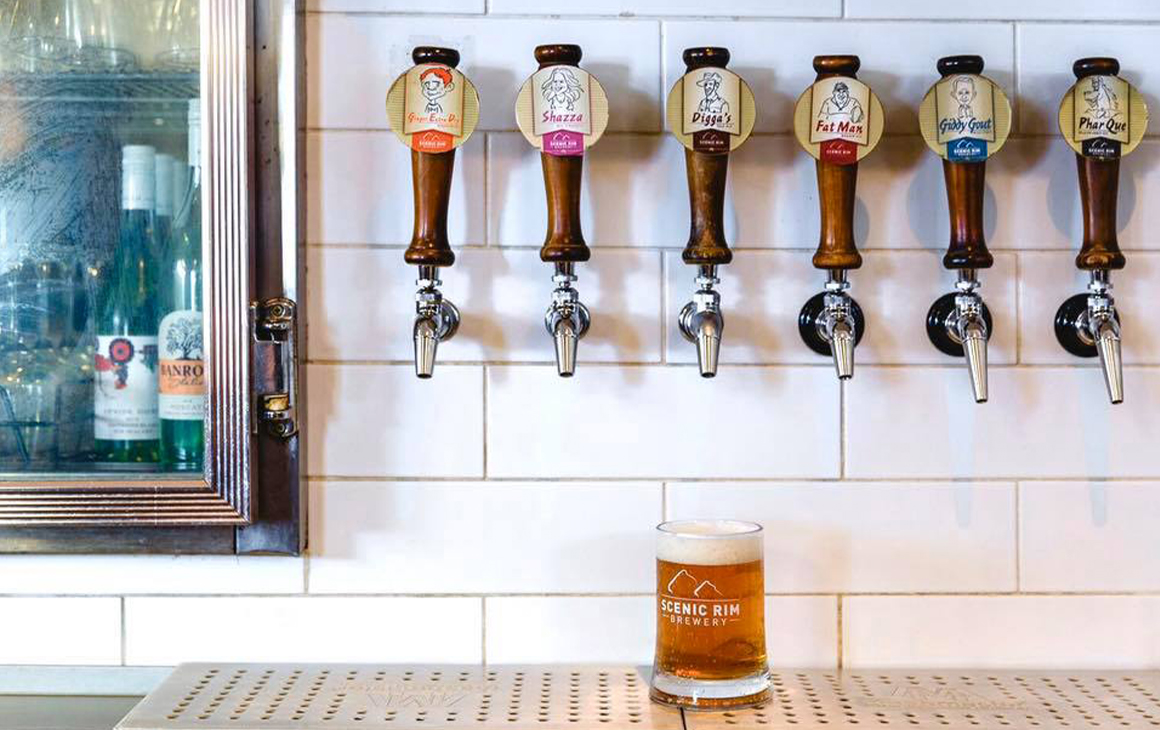 Yeah yeah, this one’s technically a brewery, but its hardcore German pub vibes give it the edge it needs to make this list. Come for the beer (their larrikin range will give you a laugh), but stay for the famous wurst platter, which comes with a bratwurst, bockwurst and cheese kransky sausage, not to mention a side of fries, sauerkraut, pickled veggies and coleslaw. And if you’re still doubting Scenic Rim Brewery’s country pub status, let us seal the deal for you: they offer shandys on the menu.

Step back in time with a visit to Rudd’s Pub, whose unique character and charm captures the heart of a hotel from a bygone era. The pub is named for famous Aussie author Steele Rudd, who is rumoured to have penned his classic ‘Dad & Dave’ stories by the hotel fireplace. Spend a night in the pub’s newly refurbished rooms, and take in the incredible photos and memorabilia that fill the walls (and the ceiling). Shower under a rainwater tank and pull on a beer tap to wash your hands (although you’ll have to refill your schooners at the bar). 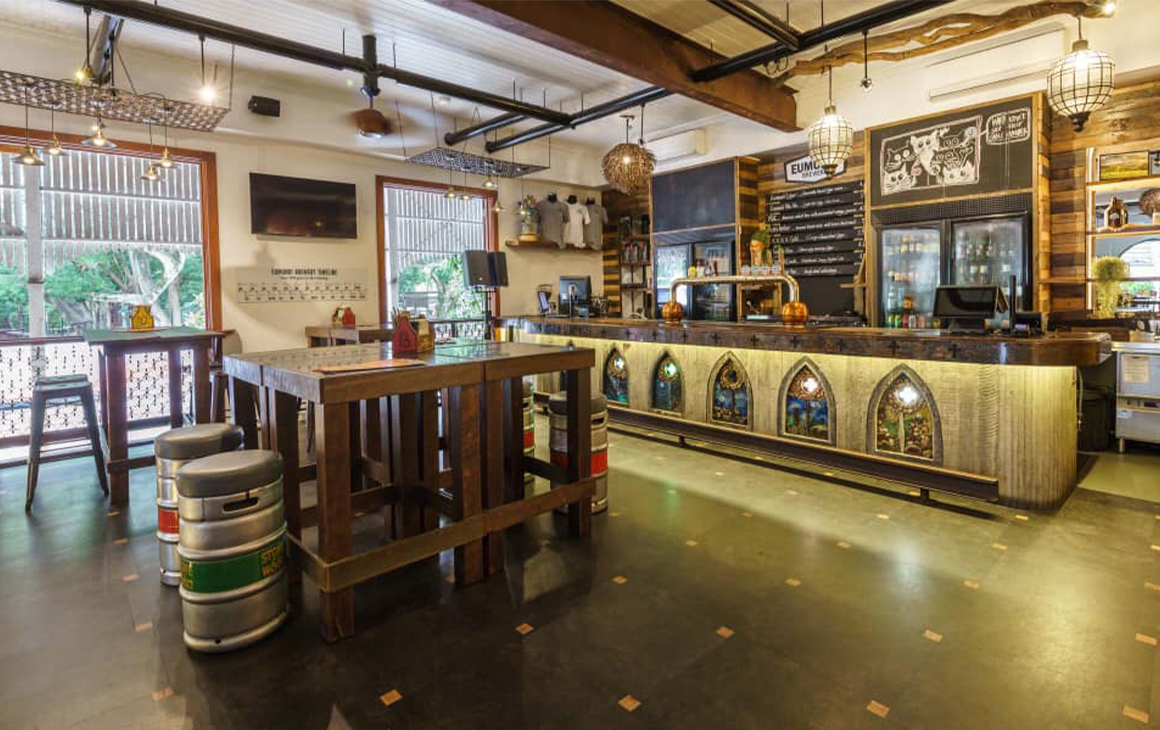 If your idea of a perfect Saturday morning is a leisurely stroll past the weird and wonderful stalls of the world-famous Eumundi Markets, you’ll feel right at home at the Imperial Hotel. The heritage-listed, century-old pub in the heart of Eumundi will make you want to join a commune and embrace your inner hippie. Don’t be fooled by its old Queenslander façade—the hotel is packed with psychedelic murals, colourful sculptures and a rustic outdoor bar and bistro. The menu pairs your favourite pub classic with contemporary dishes sure to appeal to anyone in your tribe. We’re talking Tassie salmon, zucchini fritters and gluten-free pizzas—we are in Eumundi, after all.

Next time you’re soaking up some sun on Noosa’s beautiful beaches, ditch the crowded restaurants of Hastings Street for a classic chicken parmi lunch at the Country Life Hotel in Kin Kin. Just over 20 minutes drive from Noosa, the hotel will give you flashbacks to traditional home-style cooking, the way Grandma makes it—we’re talking steak, mustard chicken and even a surprisingly good range of vego options. Stay the night to take advantage of their complimentary continental breakfast, and the chance to unwind amongst the treetops. 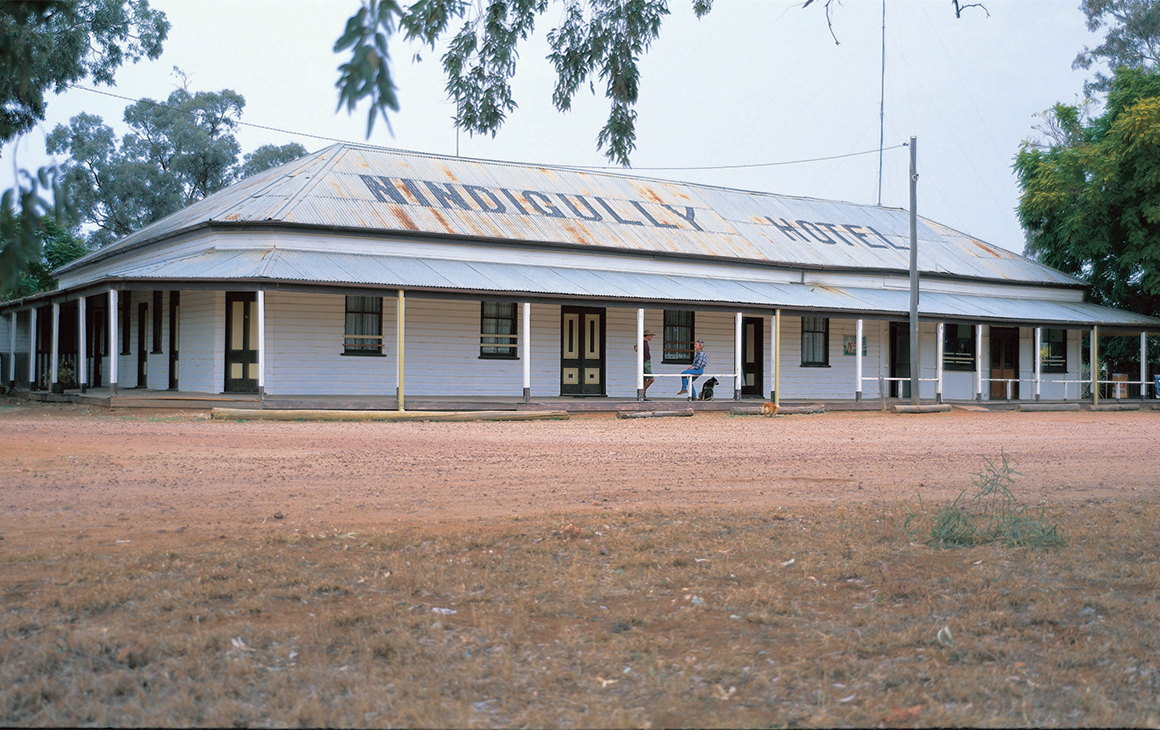 Located on the banks of the Moonie River, Nindigully Pub a.k.a. ‘The Gully’ is Queensland’s oldest hotel. The pub attracts thousands of travellers every year thanks to its legendary kilogram T-bones and ‘Road Train’ burgers (which supposedly feed a minimum of four people, but if you ask us, it’s more like 10). If you’re looking for small-town pub vibes, you can’t get a whole lot smaller than Nindigully, which only has a population of nine people. But hey, at least you’re guaranteed a table.

Making your way out to Toowoomba? Head north for 20 minutes along the New England Highway and keep an eye out for The Farmers Arms Tavern, one of the oldest pubs in Queensland. Pull in for a pint by the fire, or a round of pool as you down a schooner out in the beer garden. Grab a bite of your favourite pub classics, whether you’re a sucker for sirloin or prefer simple bangers and mash. And when you find yourself down for the count, don’t stress—there’s plenty of accommodation in the area.

Once you’ve finished smashing down those schooners, why not satisfy your sweet tooth with a visit to these country bakeries too?