Back in the early 00s, a grip of restaurateurs took the humble soups and salads of Viet cuisine, paired them with some decent booze and served it in an eatery that exceeded the standards of Melbourne’s discerning foodies. Since then, the banh mi, pho varietals and vermicelli salads have held rank in the city’s culinary offerings as a go-to for takeaway and for refined sit-in meals alike.

Until recently, however, you’d be hard-pressed to find a bowl of the good stuff along Brunswick’s Sydney Road. And that’s where Linda Huynh and Ryan Slater’s Tia Con comes in, a casual Viet diner from the couple behind some of Melbourne’s OG food trucks, Nuoc Mama’s and Round The Way. 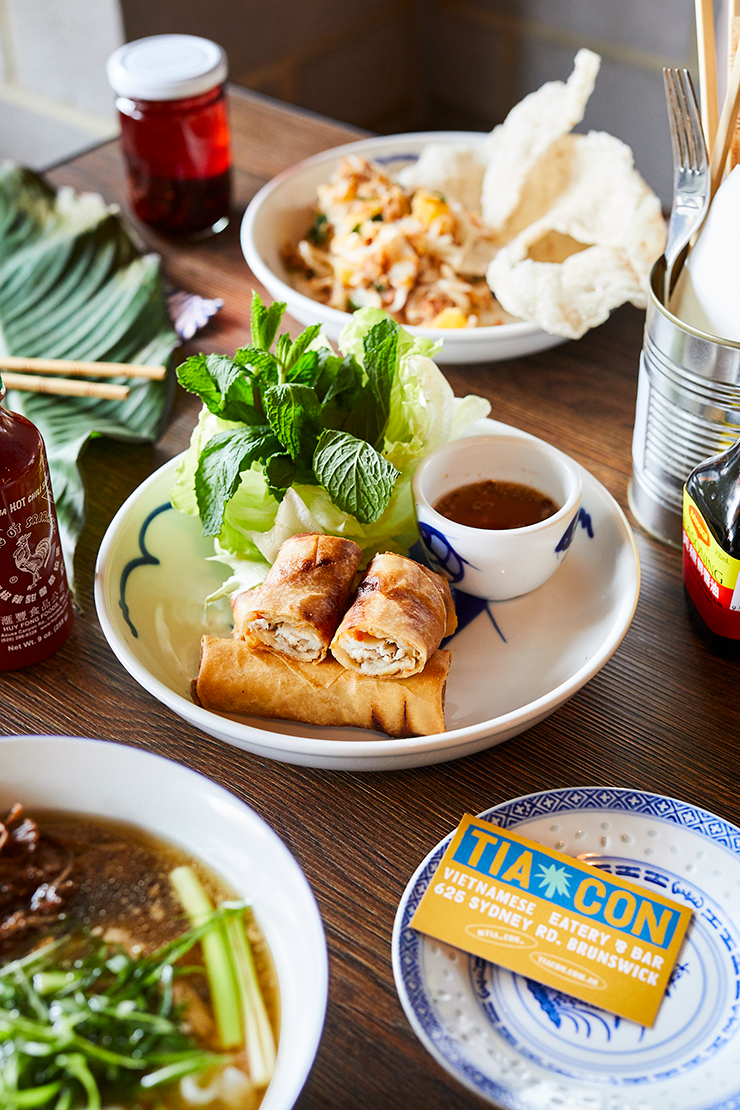 You’ll find everything you love about Vietnamese on the menu at Tia Con along with several contemporary iterations on the staples. Then, complementing a well-rounded menu is a handful of more surprising dishes you’re unlikely to find anywhere else—barramundi and daikon spring rolls, anyone?

The duo brings decades of experience to the kitchen, but that’s not the only reason the dishes exude authenticity. Much of the menu is inspired by the cooking of Huynh’s father and that heritage is evident in the flavours that have been so delicately balanced over years of perfecting the formulas. And while Huynh respects tradition, she also understands that tastes and trends change over time, which is why plates like the Viet ceviche (cured fish) take a more modern approach with fresh orange, mint and chilli served with a housemade sesame rice cracker for cut through. 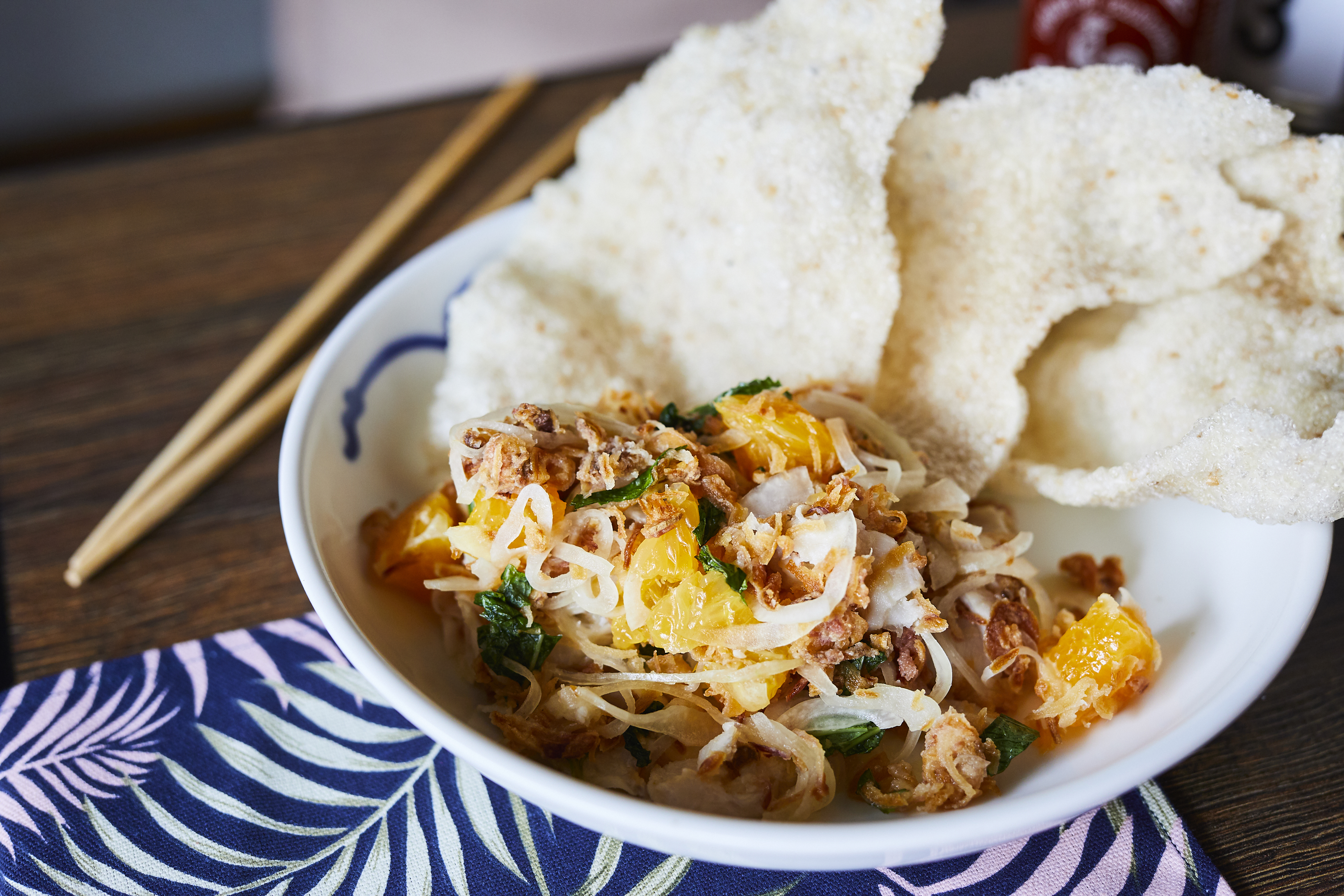 Looking past the lighter starters, you can take your traditional Vietnamese pho experience whichever way you like. The 12-hour Angus beef brisket number can’t really be looked past unless you’re a vego, in which case the vegan pho is the way to go here; this one follows a similar cooking method to its carnivorous counterpart, except instead of beef, the Tia Con team employ 12-hour salted turnip for the broth.

While the dishes pull the right amount of inspiration from the past, there’s a modern, playful element to what’s plated up that’s ever so evident, especially so in the duck Mee Goreng. Served with a boisterous housemade XO sauce along with a healthy serving of chilli, this one’s a far cry the 50c dried noodles you lived off in your uni days and should be considered as the hero of the table. Otherwise, if the traditionalist in you is calling, opt for the pork belly version and go ham on the chilli. 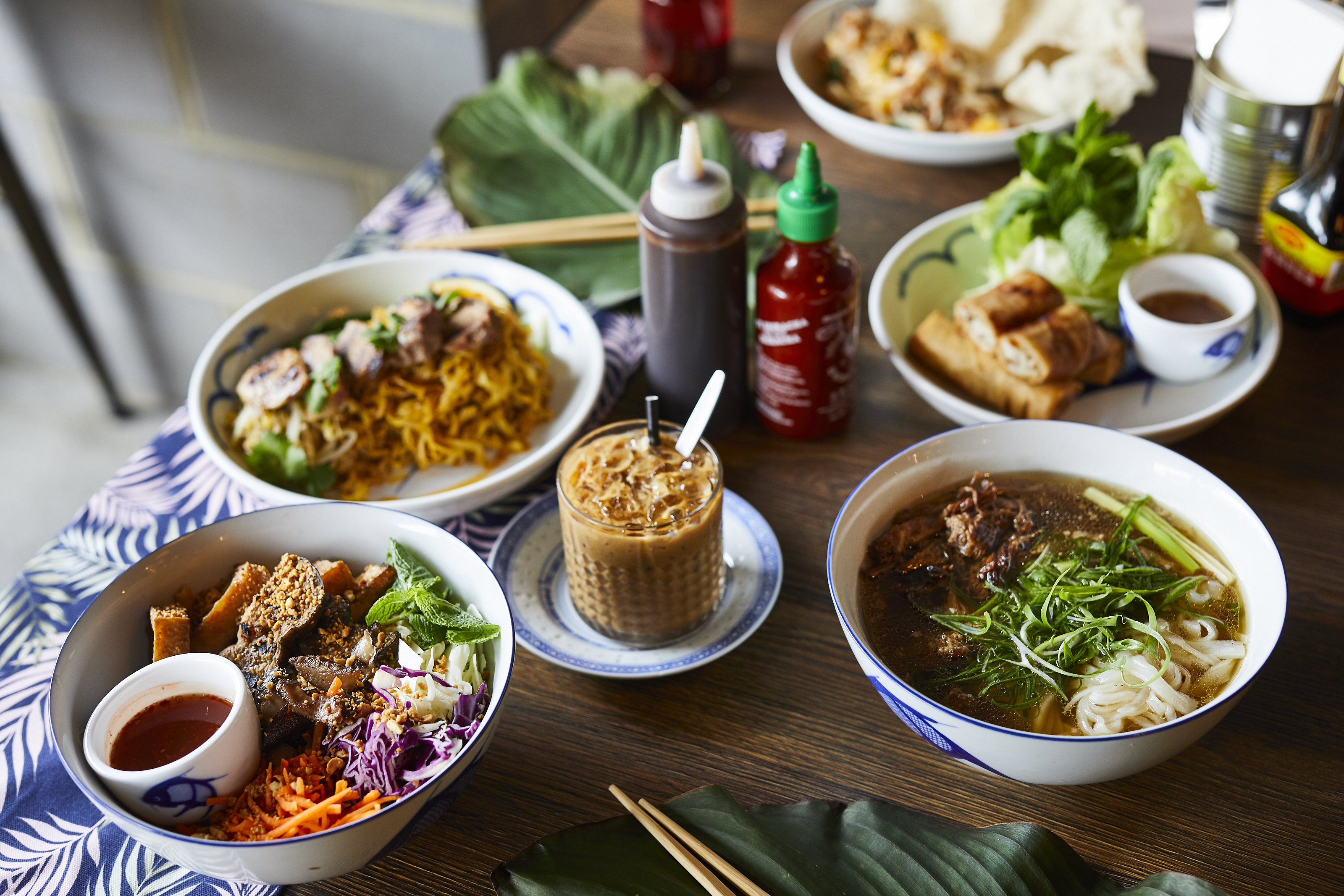 The team has taken care on the drinks list, too. The selection is predominantly Victorian, with wines hailing from Slater’s hometown, Ballarat, and beyond. If you’re after white, a glass of the Granite Hills Reisling creates just the right amount of cut-through to those fiery dishes, while a tipple from Little Polly’s pinot noir should have the same effect should you have a hankering for red. On the frothy front, Tia Con has dialled in on several neighbouring brewers with a rotating selection of fine ales.

The space is rich with charm, just as the food is, with much of the fixtures being a product of Huynh and Slater’s handy work. The interior adds to this by paying homage to Huynh’s upbringing not far from Mũi Né, a stunning coastal region in Vietnam’s south; little details like the table cloths from yesteryear should help take you there, while the beachside mural by local artist Callum Warren will definitely take you on a trip from Brunswick to Vietnam at least for just a moment.

Check out everything else Melbourne is serving up at our Food & Drink section.
Image credit: Michelle Jarni