Where To Load Up On Auckland’s 10 Best Schnitzels, According To You

There's something about the humble schnitzel that never fails to satisfy. Perhaps it's the crispy golden crumb on the outside or the juicy, tender meat on the inside—whatever the reason, one thing's for sure, this timeless comfort food that's a favourite amongst the European set is as popular now as it's ever been. In honour of 10 years of Urban List (and five in NZ) we asked you to share your shcnitty hotspots with us and you didn't disappoint.

So loosen your belt and prepare to load up at these schnitzel hotspots around the city—these are the best schnitzels in Auckland according to you.

Fancy schnitzel the size of your face, possibly bigger? Then get along to The Bavarian, an impressive German-style eatery nestled in the rooftop dining precinct at Westfield Newmarket. The schnitzels here are an absolute mind-blow, and not just because of their size (with most weighing in at a hefty 300 grams plus). We love their unconventional flavour combinations, including Parmijiana (chicken with double-smoked ham, tomato sauce and mozzarella), BBQ (pork with bacon, BBQ sauce and jalapeños), and Texan (chicken with chilli con carne, cheese and onion jus), these flavours may change but rest assured they will all be legit delicious. Innovation is the name of the game at The Bavarian with the above one of six limited-edition additions to the menu that features cheese Kransky, creamy mash, caramelised onion and gravy... with the option to supersize to 1kg.... not for the faint of heart. For a true blue schnitzel experience, make sure you pair your meal with one of this spot's hugely popular pretzels, as well as a stein or two—the Lemon Weissbier (beer with a splash of Limonata) will legit change your life. So pull up a bench, and let the face-stuffing commence. We're with Jason when he says, 'this is some seriously good schnit.'

You know Ima Cuisine for their hugely popular hot cross buns, but did you know that they also do a pretty wicked schnit? These guys specialise in hearty, Mediterranean fare that's packed full of flavour, and this is certainly the case with their crunchy chicken schnitzel, which comes alongside a tasty Middle Eastern salad and some creamy mashed spud. Yup, this is officially comfort food at its best. Bri agrees, telling us Ima's schnitzel is bursting with old-fashioned flavour, making it her fave dish on the menu. 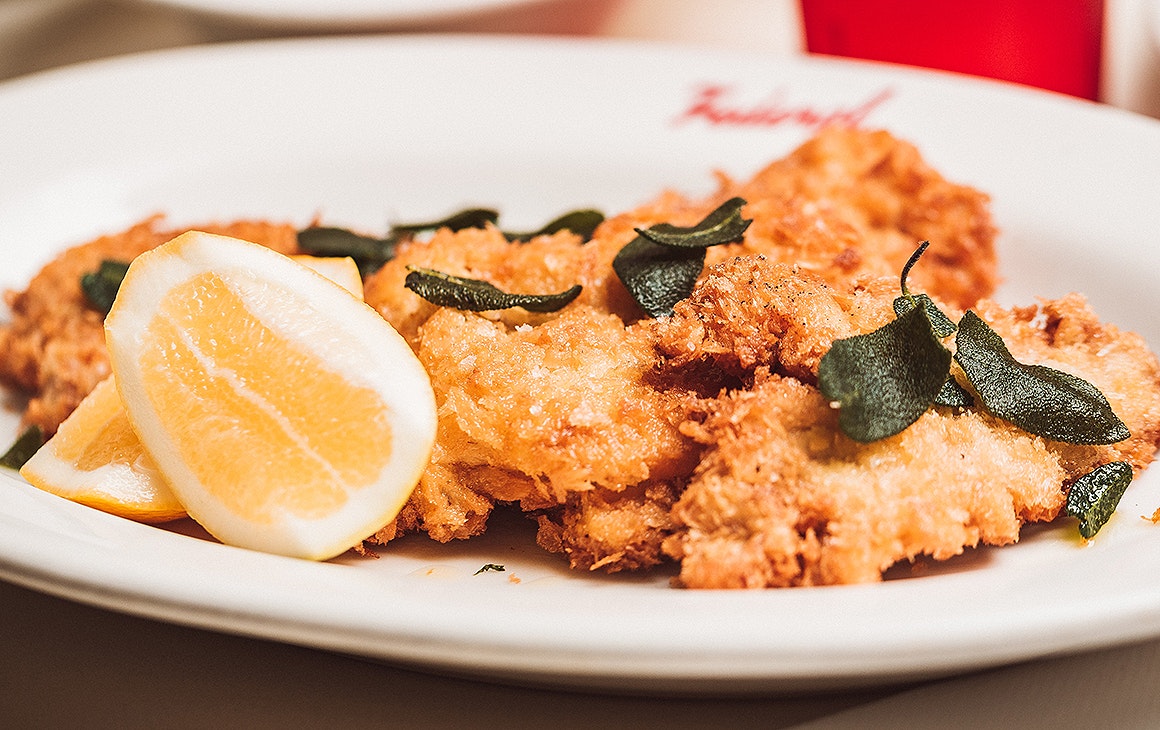 If you ever needed another excuse to visit The Fed, here it is—premium schnitzel made from tender milk-fed veal. The fact that it's been on the menu for several years now—a rare feat on the food scene, let's be honest—is proof of just how good it is. Order alongside the eatery's trademark poutine and things reach a whole new level of deliciousness. Kate says that as with everything at The Fed, their schnitzel 'ticks all the right foodie boxes.'

Also home to legendary sized schnitzels is Der Metz, an authentic German restaurant just off the main road in Kohimarama. This family-run business has made a name for itself by slinging some seriously mammoth schnit, which come in no less than eight mouth-watering varieties. Keep it traditional with the Jägerschnitzel (bread-crumbed beef with a rich mushroom gravy), or take the plunge and try something a little more exotic, like the Paprika Schnitzel (bread-crumbed or grilled chicken schnitzel in a spicy paprika sauce). Whichever option you choose, we have just one piece of advice: be sure to wear your loose clothing (because as Helena puts it, these schnitzels will put you into 'the best food coma, every single time').

It's only fitting that an award-winning restaurant would serve some pretty good schnitzel, right? So with that in mind, head along to The Engine Room in Northcote for a fine-dining version of the dish you won't soon forget (and which, like The Fed's, has been a part of the menu for as long as we can remember). Yes, don't let the $40 price tag put you off, their pork offering with caper butter, potato rosti and coleslaw is, in our opinion, worth every penny. Holly is a big fan, telling us that the name 'The Engine Room' should be reason enough for this schnitzel to make the list.

Bird On A Wire

Chicken schnitzel fans, this one's for you. Bird On A Wire are experts at creating delish chicken dishes, including a free-range, panko-crumbed offering that's served with fennel slaw and beer-battered chips for peak schnitzel-eating pleasure. Help your feed take flight with a bottle of ice-cold cider. Susie knows a good thing when she eats it, describing this schnitzel in just three simple words: 'So. Damn. Tasty.'

Another spot with outstanding schnitzel is Little Jimmy in Epsom. These guys do a game-changing chicken number accompanied by creamed sweetcorn, salsa, burnt butter and lemon (hells yeah). Wash it all down with a housemade cocktail (the lemon-laced Maple Whiskey Sour, perhaps?), and you've got yourself the stuff of sweet schnitzel dreams. P.S. Mike loves the fresh, uncomplicated flavours of this dish, telling us 'it's a refreshing change to the standard schnit.'

Frozen margaritas ain't the only thing Coops Corner Pub has going for it. They also do a mean chicken schnitzel, served with green herb slaw, fries, gravy, and a fried egg that will lay the groundwork for said margs rather nicely... Mon says this schnitzel is her Coops Corner go-to because it's 'no-nonsense, super filling and most importantly, tastes amazeballs.'

Another place with solid schnitzel is Morningside Tavern. This trendy spot is dishing up a yummy pub grub-ish version made from chicken alongside housemade pickles and chamoy (a fruity Mexican sauce). Josh says this one's best enjoyed 'with a bowl of smashies with truffle salt, and an ice-cold bottle of Mac's Cloudy Apple.'

Finally, another chicken schnitty for you to sink your teeth into thanks to the legends at beachfront hotspot, Moretons Bar & Restaurant. This one is a li'l lighter on the stomach than some of the others on this list, ditching big, bold flavours (not that there's ANYTHING wrong with those!) in favour of more subtle ingredients like parmesan and pickled lemon. Cal says this is the perfect dish to refuel with after a day in the sun, 'preferably with a glass of pinot gris.'