Where To Load Up On Auckland’s 10 Best Schnitzels

There's something about the humble schnitzel that never fails to satisfy. Perhaps it's the crispy golden crumb on the outside, or the juicy, tender meat on the inside—whatever the reason, one thing's for sure, this timeless comfort food that's a favourite amongst the European set is as popular as it's ever been. So loosen your belt and prepare to load up at these schnitzel hotspots around the city—trust us when we say, they're the schnit.

Fancy schnitzel the size of your face, possibly bigger? Then get along to The Bavarian, an impressive German-style eatery nestled in the rooftop dining precinct at Westfield Newmarket. The schnitzels here are an absolute mind-blow, and not just because of their size (with most weighing in at at a hefty 300 grams plus). We love their unconventional flavour combinations, including Parmijiana (chicken with double-smoked ham, tomato sauce and mozarella), BBQ (pork with bacon, BBQ sauce and jalapeños), and Texan (chicken with chilli con carne, cheese and onion jus). The monster in the image above was a special for St Paddy's day featuring a stack of crispy schnitties, bacon, eggs and curried potato gems... not for the faint of heart. For a true blue schnitzel experience, make sure you pair your meal with one of this spot's hugely popular pretzels, as well as a stein or two—the Lemon Weissbier (beer with a splash of Limonata) will legit change your life. So pull up a bench, and let the face-stuffing commence.

If you ever needed another excuse to visit The Fed, here it is—premium schnitzel made from tender milk-fed veal. The fact that it's been on the menu for several years now—a rare feat on the food scene, let's be honest—is proof of just how good it is. Order alongside the eatery's tradmark poutine, and things reach a whole new level of deliciousness.

Also home to legendary sized schnitzels is Der Metz, an authentic German restaurant just off the main road in Kohimarama. This family-run business has made a name for itself by slinging some seriously mammoth schnit, which come in no less than eight mouth-watering varieties. Keep it traditional with the Jägerschnitzel (bread-crumbed beef with a rich mushroom gravy), or take the plunge and try something a little more exotic, like the Paprikaschnitzel (bread-crumbed or grilled chicken schnitzel in a spicy paprika sauce). Whichever option you choose, we have just one piece of advice: be sure to wear your stretchy pants.

It's only fitting that an award-winning restaurant would serve some pretty good schnitzel, right? So with that in mind, head along to The Engine Room in Northcote for a fine-dining version of the dish you won't soon forget (and which, like The Fed's, has been a part of the menu for as long as we can remember). Yes, don't let the $40 price tag put you off, their pork offering with caper butter, potato rosti and coleslaw is, in our opinion, worth every penny.

Another spot taking the bigger-is-better approach to their schnitzel is The Occidental. Escape to this Belgian beer café on Vulcan Lane for a generous portion of crumbed, tenderised chicken, served with tagliatelle in a hearty, ratatouille sauce. Wash it all down with a pint of beer (Belgian, of course), and you've got yourself the stuff of sweet schnitzel dreams.

Likewise, you wouldn't expect to see schnitzel on the menu at The Lula Inn. Their chicken version, however, is a pleasant surprise and certainly ranks as one of the lighter options on this list (not that we're too concerned about that). Pair this yummy free-range offering—which comes with shredded cos, citrus dressing and parmesan—with one of their signature gin cocktails, and you have a wonderfully refreshing take on an oft-stodgy dish.

The Dominion know a thing or two about pub grub, and their schnitzel is no exception. Head along to this popular Mount Eden spot for an upmarket version that will have your mouth well and truly watering—think juicy chicken breast, hammered into schnitzel perfection and served alongside mustard mash, slaw, and burnt apple purée (an ingenious addition, if we do say so ourselves). 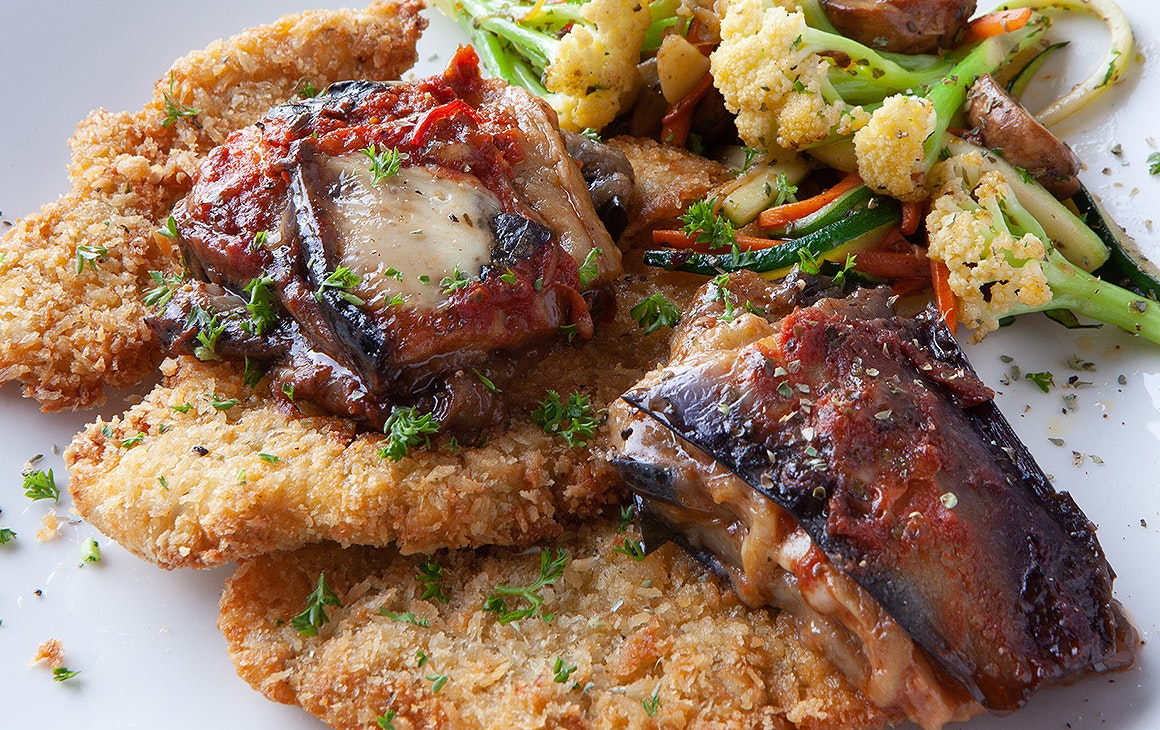 Pasta ain't the only thing Barbarino's Spaghetteria has going for it. They also do a mean schnnitzel, available in either chicken or beef and served in such a large portion, it'll leave room for little else on your plate (or in your tummy, for that matter). However if you are in the mood for something extra, plump for the combo; which comes with your choice of orecchiette or spaghetti in napoletana or gorgonzola sauce.

Bird On A Wire

Chicken schnitzel fans, this one's for you. Bird On A Wire are experts at creating delish chicken dishes, including a free-range, panko-crumbed offering that's served with fennel slaw and beer-battered chips for peak schnitzel-eating pleasure. Help your feed take flight with a bottle of ice-cold cider.

Frasers is a Mount Eden icon, dishing up classic fare that never fails to disappoint. This is especially true of their veal schnitzel, which again comes on the larger side and with the rather refined additions of café de Paris, jus, potato gratin and rocket salad—a match made in schnitzel heaven (because you know just as well as we do there is such a place).