Cue The Adventure, These Are Sydney’s Best Spots To See Christmas Lights

It's that time of year again. Bust out the Mariah, slap on a (seasonally inappropriate) Christmas sweater, load up on eggnog and mince pies and pause your cheesy Christmas movie binge-fest courtesy of Netflix, because it's time head out for some Christmas lights.

Whatever suburb you’re in, how ever far you’re keen to travel (or not), there’s a street packed with blinking LED goodness ready for your gawking.

Here are the best streets to see Christmas lights in Sydney.

The beating heart of the city’s Christmas festivities, St Mary’s Cathedral will have you feeling pretty Santa-mental. Starting from 5 December, these light shows are absolutely stellar. They’ve got all you could ever want from a light show including Christmas-inspired churros courtesy of the food trucks which open from 5pm every night. The lights themselves kick off at 8:30pm (following a choir performance at 7:30pm every night). The lights on the face of the Cathedral will give you a whole new appreciation for the architecture and will surely get you in the Christmas spirit.

Once again, Pitt Street Mall will light up underneath a canopy of Christmas trees. Expect thousands of LEDs and nothing short of an extravaganza of photo opportunities. 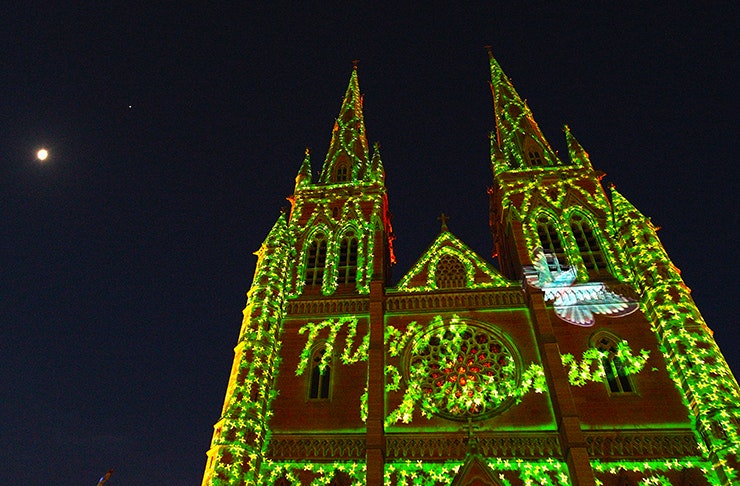 With a jewelled light installation, bring the group chat down to see thousands of LED lights that adorn NSW’s tallest Christmas tree. This year the tree’s 800 branches will be dressed with 15,000 Aussie flowers and topped with a mammoth 3-metre star. There’s a light show every 15 minutes from 7pm to midnight and from Thursday through to Sunday you can sing a carol or two with the choir from 6pm.  Plus, there’s a dessert bar, so that’s a big win in our books.

This Northern Beaches Avenue takes Christmas seriously. There’s not a single house on the street that doesn’t get in on the action. There was one hold out who’s been known to use twinkly lights to spell out Bah Humbug which we guess makes them a Rebel without a Claus (get it?) but the other houses go all out. In the past there’s been an animatronic Santa, trains, forests of fairy lights, glowing snowmen, just about every Christmas option you could think of.

Lane Cove Council definitely has their Christmas antics together, running a Light Up Lane Cove competition every year (so obviously, it’s going to be good). There’s no one street that showcases the best light display in the area because, well, they’re all impressive (but Sutherland Street was last year’s MVP). Cue an-honest-to-god fairy light expedition.

Pair your light-seeing with some dinner (and by dinner we mean ice-cream from the staple ice-cream van) around the streets of North Ryde. For serious wow factor, Schumack Street can’t be missed. 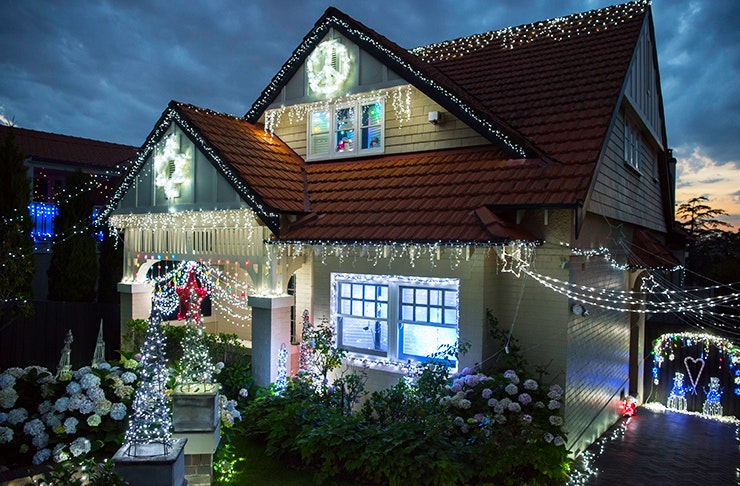 This one’s a biggie. Think of it like this, would you go to Paris and not see the Eiffel Tower? The same goes for Borgnis Street during Christmas. This attraction is always huge, with epic glowing strips and stand-alone houses wrapped in colourful light displays. This year their lights are being switched on at 7pm on December 7. This extravaganza is so big that they have three ice-cream vans and a sausage sizzle because you’ll need sustenance. And since you’re around here, Cambage Court is also worth your time.

There’s a glorious and picturesque bunch of streets you should be trawling your way through in Baulkham Hills. We’re talking about Geraldine Avenue, Brokenwood Place, Marcel Place, Baulkham Hills Road and Juniper Place which all have a cute selection of homes who are all about the Chrissy spirit too.

Make your way to Excelsior Avenue this month because trust us, you’ll want to see over 10,000 lights in action. There are surprise visits from Santa (you know, before the big day), inflatables, BBQs and a heap of special events sprinkled throughout the month and we’re all over this one.

George Michael educated us on the perils of giving away our hearts at Christmas but these worthy displays in Bondi would never break your heart. Avoca Street really gets in on the Christmas spirit with fifty-plus houses decked out from their front gates to their roofs. A particular house on Waratah Street is also known for its flair and has already voted best of the best.You can expect snowmen, glowing presents, a Christmas archway and much more.

These Christmas lights have become an unofficial tourist attraction. More and more extravagant every year, the lighting party at 47 Elizabeth Street has been known to make the papers. Since 2001, Gary Swales has been decorating his Paddington terrace for the Christmas season. A conservative estimate would place the number of individual lights at a couple of thousand, including the four Christmas chandeliers (yep - you read that right)! Last Christmas the house was gift wrapped with a 25-metre red satin bow, this year they’ve promised bigger and better.

Nothing can prepare you for the kaleidoscopic light overload at The Cascades, a local favourite (and soon to be yours). These houses have been killing it for the last couple of years and are sure to bring their A-Game to 2019.  Charge those phone batteries because we guarantee you’ll be on the ‘Gram religiously.

The whole suburb is in on the game but, if you’re in the hood, make sure you head down to Karne Street North! One house, in particular, is known to have singing Santas, polar bears, Frosty The Snowman and a light-up Olaf (because why not?). And occasionally the big man himself even pops by. Yep, you’ll find one of the biggest light shows in Sydney right here. 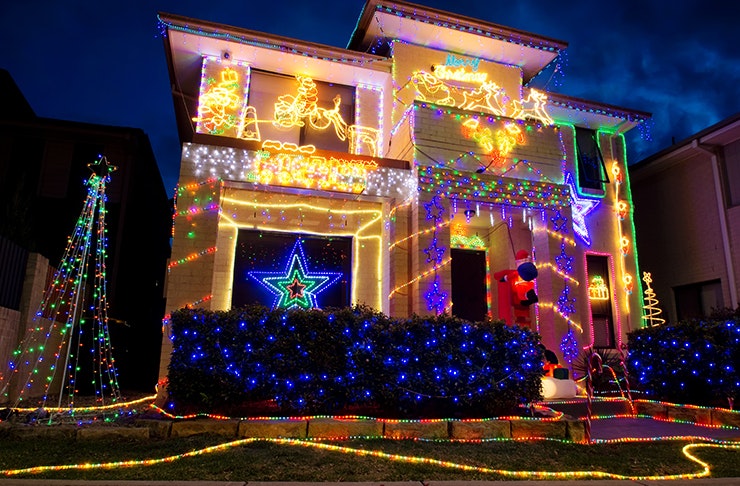 Check into Madrers Avenue and Souter Street all the shining Christmas decorations. With over 50,000 LED lights, a singing bear, reindeer, the whole gang! You’ll wonder if you really found wonderland.

There are two houses around here that know how to whip up a Christmas bonanza bigger than the Griswold's (you’ll know them when you see them). These guys join forces with jumping lights that stretch across their two gardens to bring you an awesome light and music show.

It’s the one, the only, Erskine Park. Get yourself down to Grebe Street and Warbler Street and it’ll begin to feel a lot like Christmas.  Expect all the Christmas shenanigans including Santa’s shed, dozens of inflatables, in the past they’ve been known to pull out all the stops, we’re talking snow machines, laser displays, Christmas movies on the big screen and sometimes, even free face painting.

Feast your eyes on the most extra Christmas decorations, this side of Sydney will ever see. House number 191 Burwood Road has been home to 100,000 LED lights for the past 20 years - we’re seriously talking walls of twinkly lights here. Plus, there’s always a Mr Whippy van parked right out front (score).

And here are all the restaurants open on Christmas Day so you don't have to cook.