The hospitality sector has had a lot of time to think during the pandemic. Award-winning bartender Matt Whiley decided that once things returned to some semblance of normality, he was going to do things differently—like, really differently.

Whiley's endeavours have always been grounded in sustainability and a reaction to the amount of food wasted in the hospitality industry. His previous project Scout, a secret hideaway perched at the top of The Dolphin in Surry Hills, operated on these principles, but this time he wanted to push it even further.

Working with long-time collaborator Maurice Terzini, the industry heavyweight behind Icebergs Dining Room & Bar and CicciaBella, the pair set out to achieve a world-first—a completely waste-free bar and restaurant.

A hero piece at the new South Eveleigh dining precinct, "Re" is the name of the bar and it officially opens today.

Re is the planet's only permanent establishment to operate almost entirely off of waste produce and recycled materials but—interestingly—Whiley and Terzini have decided not to label their boundary-pushing concept "zero waste". Not yet, anyway. It's a sign the pair aren't interested in greenwashing us, but they are interested in setting a new example for the industry, proving a bar can be world-class and Earth-friendly at the same time.

Even without the label, just about everything at Re has been considered through a lens of sustainability. From the interior design choices to the glassware, ingredients and garnishes, Re is pushing the concept of zero waste to new heights.

“99.9% of the things that we use will be food waste,”  Whiley explains. “We're looking at anything that is recycled, anything that usually goes in the bin, and asking how we can use that to open a bar that still operates on a level we deem to be exceptional?” 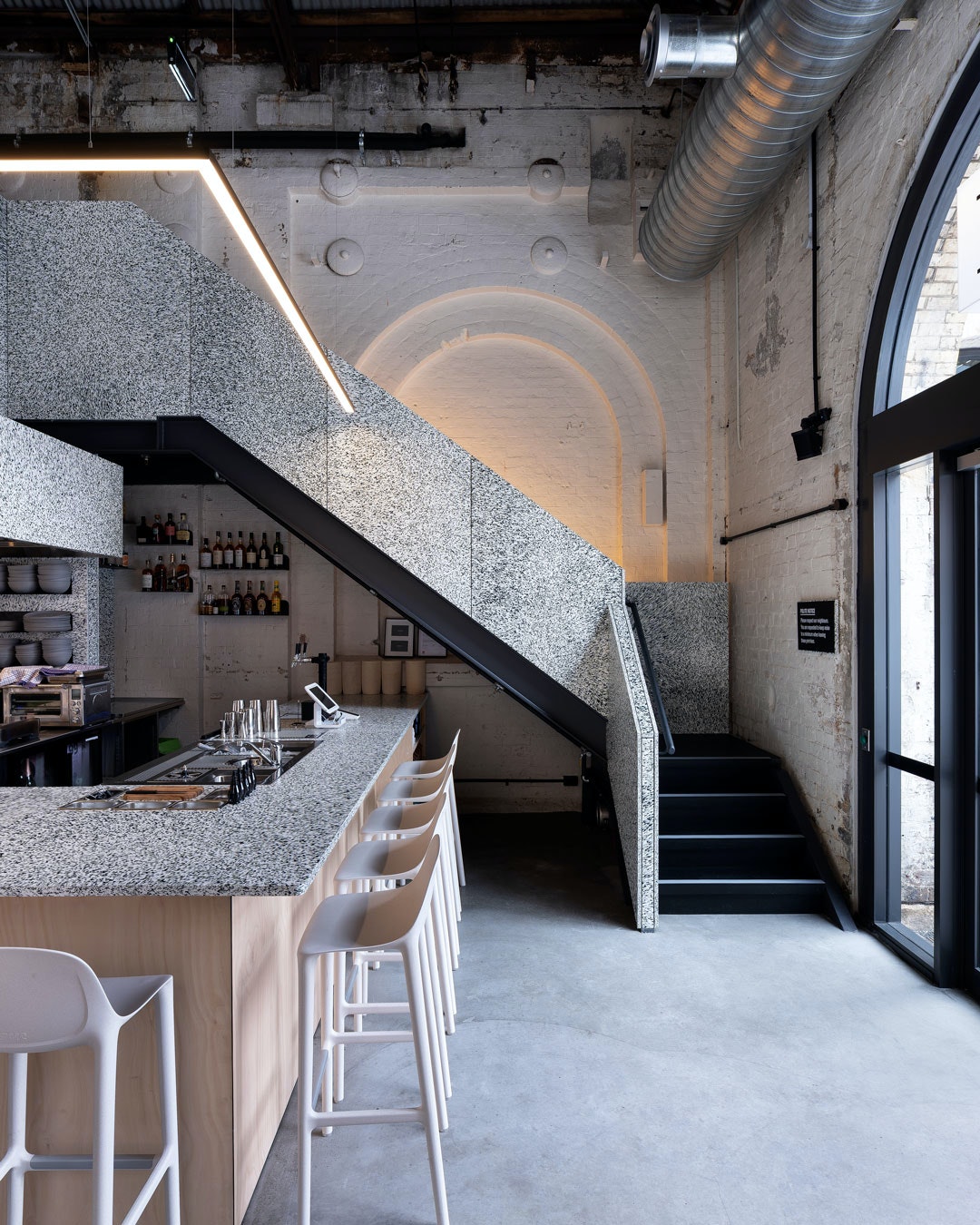 It almost goes without saying that Re feels like a necessary move. Food waste is one of the biggest challenges we have right now. While 690 million people go hungry each day, 1.3 billion tonnes of food either spoils or goes to waste. It’s a massive problem that Re is trying to correct in some small way. If it’s successful, and the odds are greatly in its favour here, it could be the start of many long-overdue conversations throughout the industry.

But what does a low-waste cocktail involve, you ask? Poured into reclaimed Maison Balzac glasses, standout drinks to try include a Martini with white truffle and olive leaf, a Sbagliato with a hint of rhubarb, and a Margarita infused with rockmelon. The Re spritz is made with plums and peaches otherwise destined for the compost, and banana skins form the base of a syrup that goes into the "PB + B Old Fashioned", which is flavoured with peanut butter and burnt butter.

Whiley will also be joined behind the bar by a cast of Sydney's best bartenders: Evan Stroeve (Bulletin Place), Jake Downe (This Must Be The Place), and Ho Song (Cantina OK, PS40).

A themed menu of extra-creative limited-edition specials (called "Re-search") is currently wielding some galactic inspo. A drink called "The Milky Way" has been created to mimic elements found at the centre of the galaxy. The ingredients for "Mars" read simply, "Bulleit, silicon, magnesium, iron."

Meanwhile, the sustainably-centred snack-based menu has been overseen by Icebergs' head chef Alex Pritchard. Heroes include the "Egg & Chips" dish, made up of spreadable 'Nduja and salt-and-vinegar chips with a 63-degree egg, and the "St John Rarebit", a version of the legendary sambo from the London restaurant, with flavours of cheddar, Worcestershire sauce and Guinness. 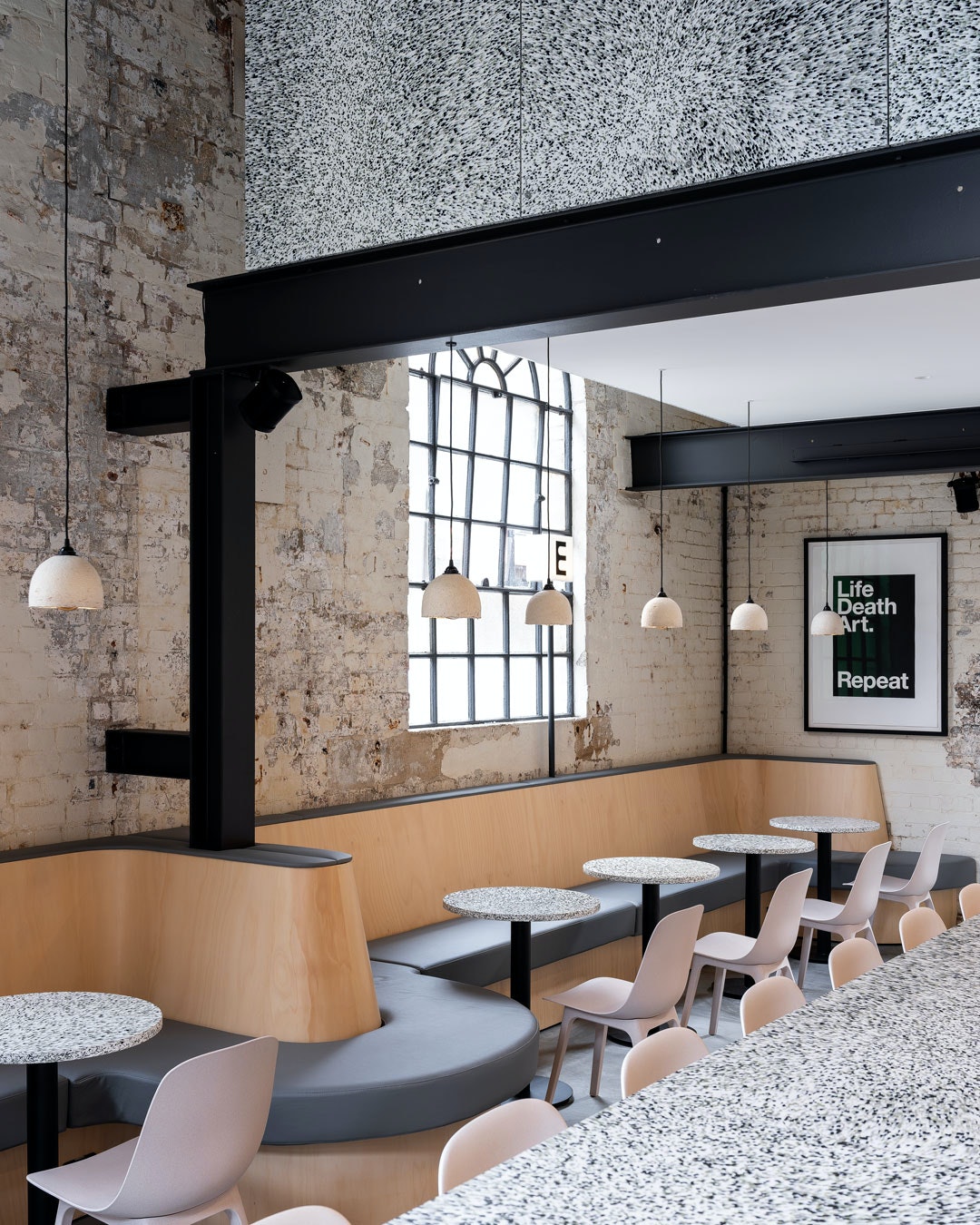 Design-wise, Re's central bar and tables might look like trendy terrazzo, but they're actually made from recycled bottles and Tupperware (diverting around 80,000 plastic milk bottles and containers from landfill). The stairs and other structural features have been made from recycled plastic bags and milk bottles, and the banquettes are upholstered in a sustainable pineapple-leaf fibre. Even the wine coolers are grown from mycelium.

While Re is taking a pretty radical approach to ethical and sustainable dining, Whiley is abundantly cautious of stepping into “preachy” territory and hopes that the way the bar is run will simply be a background to the main events of eating and drinking something delicious.

“We want the everyday experience of the bar to be a place to come and drink things that you like,” Whiley says. “It’s just not fun when you walk into a venue and someone speaks to you for five minutes about the concepts. Going somewhere should mean leaving and feeling happier than when you arrived and then wanting to go back. And hanging out with your friends and being social”.

“Yes Re is built on waste, but it’s this really incredible, refined space with heritage character. We want to change people’s expectations of what low-waste means, and encourage others to build and operate this way.”

For more information on Re, including opening hours, jump over here.

And you can read more about the new South Eveleigh dining precinct here.