Hiking is one of those weekend activities which make you feel like you’ve achieved something come Monday at the office. Plus it's a whole lot of fun too.

For those of you up for a hike near Sydney, you’re in for one heck of a treat. We’ve found some stand-out hikes in Sydney based on raw beauty, convenience and seclusion. Get those hiking boots on and get ready to explore a little of NSW stunning nature spots.

These are Sydney's most scenic, adventurous and all-around awesome hikes. 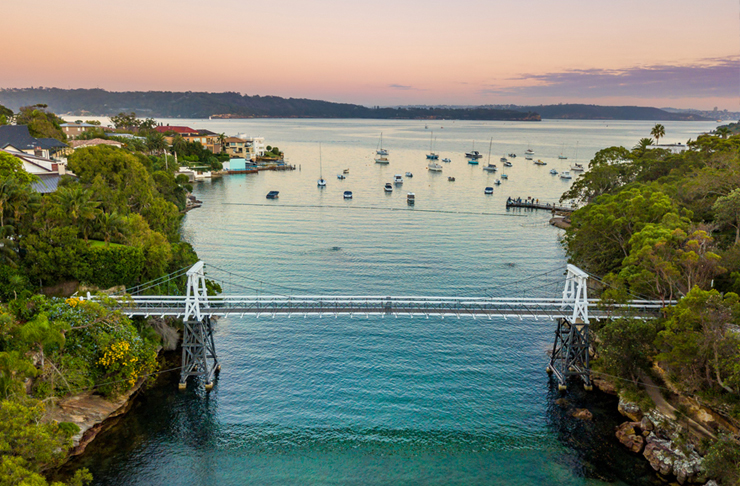 This lengthy coastal walk weaves through 80km worth of major historical sites, the Sydney Harbour Bridge and Opera House, joining together a bunch of existing trails into one mammoth seaside hike. The track passes Macquarie Lighthouse, Murray Rose Pool, Taronga Zoo, Bradleys Head, Clifton Gardens, Middle Head, the Clontarf, and North Head. There are plenty of pit stops if you’re keen for a swim or a cold beer.

It’s also divided into eight sections, making it easier if you’re just keen to slap your running shoes on and conquer Rose Bay to Darling Point or Taronga Zoo to the Spit Bridge (both sit between eight and nine kilometres). There’s obviously also the option to go full Bear Grylls and split the entire walking track across multiple days. Check out all the access points to the Bondi To Manly Walk here. 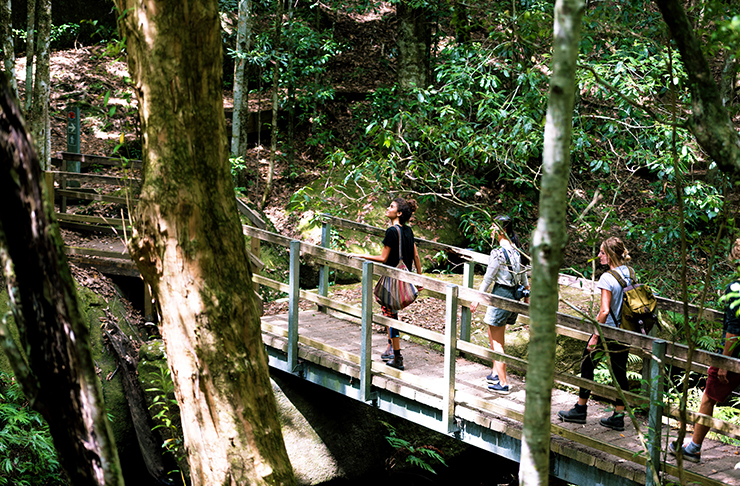 Watagans National Park is about a two-hour drive from Sydney and throws up some serious wilderness scenes. The Great North Walk is a solid hike to do on your weekend and spans about 10-kilometres one-way. This route actually crosses through a number of other areas including Jilliby State Conservation Area and the ever-stunning Brisbane Water National Park but if you’re accessing it through Watagans, your hike will take you along Georges Road in the northern section of the park.

Along the way, you’ll pass Narrow Place lookout which opens up over Quorrobolong to Ellalong, Cessnock and Kurri Kurri. This hike near Sydney is best suited for those of you who don your durable Kathmandu gear on the regular. Novice hikers, you might want to sit this one out or take an easier track in the park—the Circuit walking track is a short walk which plunges into moss-covered rainforest.

If you're game enough, you can also do the full 16-day Great North Walk from Sydney's Lane Cove National Park which passes through the Hunter Valley and Newcastle. 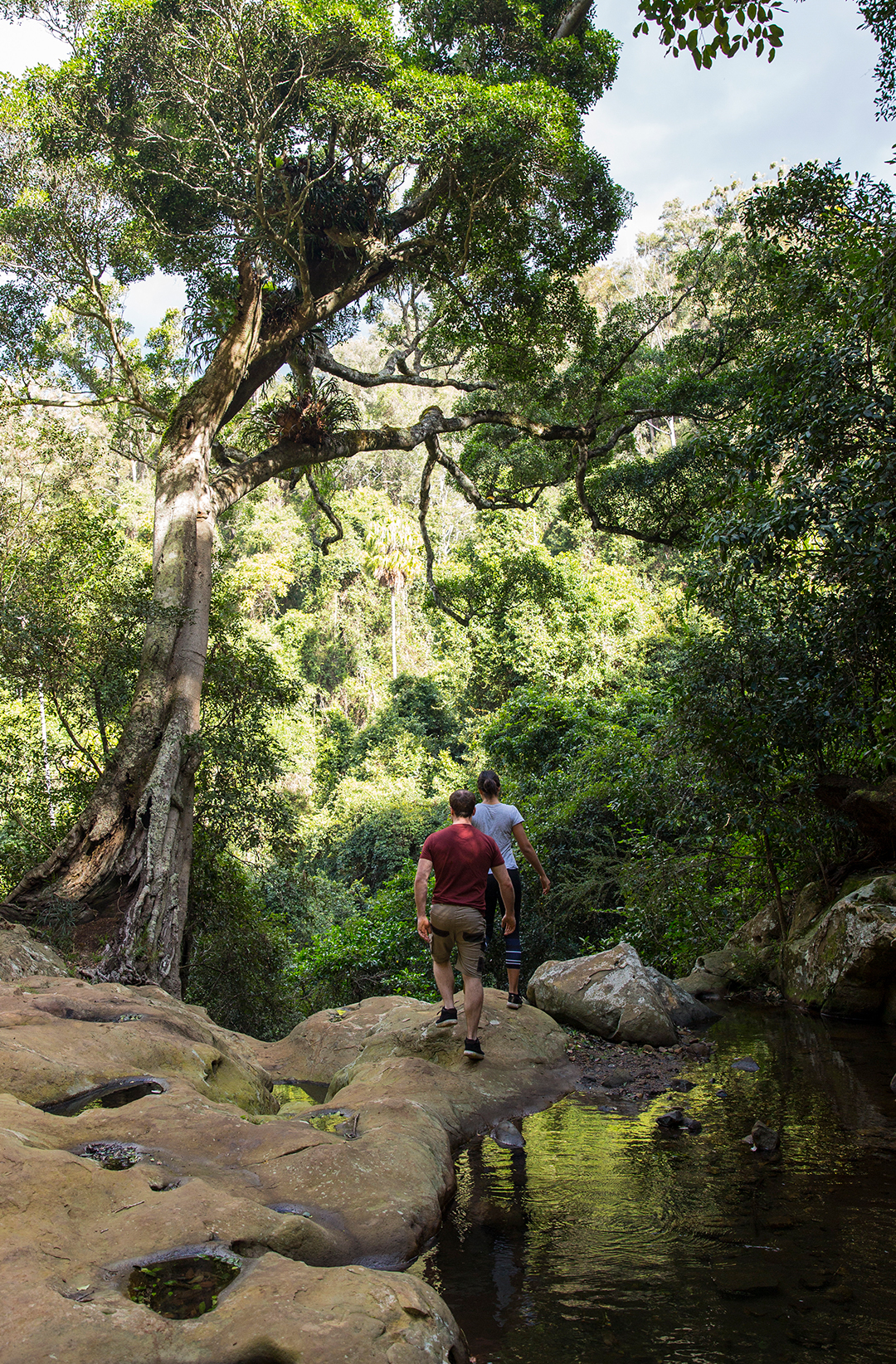 The Clover Hill Trail is a hike near Sydney which truly has it all. From escarpment views and wildflower clusters to running creeks and waterfalls, there’s not a lot you won’t see on this walk. If you’re coming from Sydney, you’ll have to drive past Wollongong into Macquarie Pass National Park which will take you about 90-minutes.

This hike used to be a logging route and leads you all the way to the Rainbow Falls cascades, so juice up those phones, you’ll want to take a snapshot of this one. 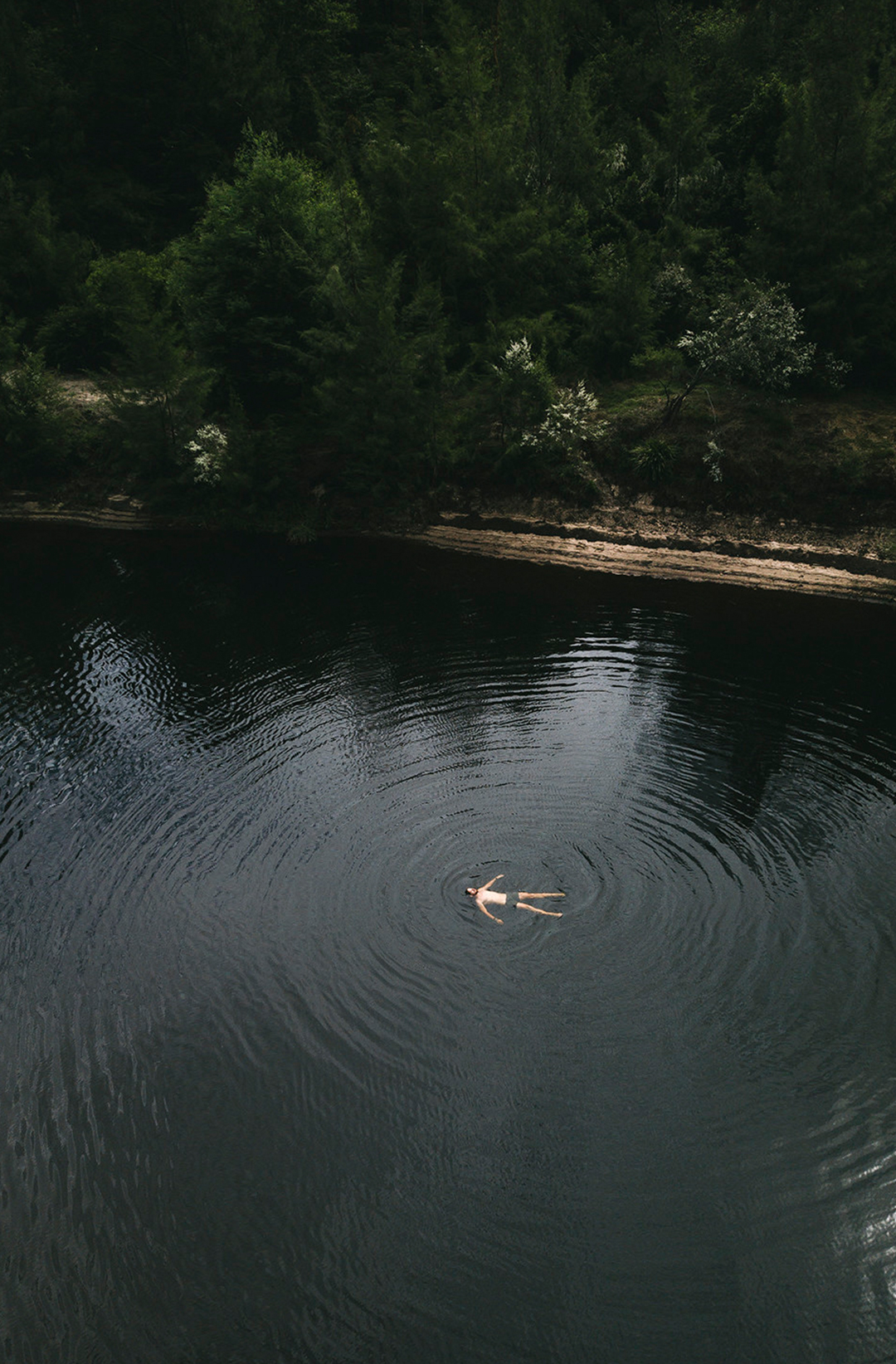 Spoiler alert, this walk near Sydney contains a pretty magical in-land beach. Bob Turners Track was originally a packhorse route so the pathway itself is pretty clearly marked out. You can access this hike about 500m down the road from the Ampol service station on Putty Road. Follow the signage towards “Bob Turners Track” and you’ll end up at a parking lot to leave your wheels for the day and kickstart your hike.

The track drops 350-metres down into the Colo River on the edge of the Wollemi wilderness, so wear some solid walking shoes because you’ll be crossing a series of gullies.

The historical Six Foot Track is one of the most breathtaking walks near Sydney. Taking you from Katoomba to the Jenolan Caves, this route follows a horse-track which dates back all the way to the 1880s. You could stretch out your adventure over three days (many avid hikers do because the stargazing out here is next level) but you can also just explore part of the track making it the perfect weekend outdoor activity.

Six Foot Track features state forests, heritage sites, woodlands, rainforest, and a suspension bridge (Bowtells Swing Bridge). This walk kicks off near Katoomba, close to Explorers Tree, and descends down into Megalong Valley. The first campsite is Coxs River, this is about 16km from the car park at Explorers Tree so if you’re not in it for the long-haul, you probably don’t want to end up out this far.

Distance: 46km oneway for the entire three-day walk, but you can stop and turn back to Explorers Tree whenever you like
Walking Time: 2 hours - 3 days (you can even follow the track to Nellie’s Glen and loop back to Explorers Tree for a shorter trail)
Difficulty: At times there may be rough tracks and obstacles, though the gradient is relatively flat

The iconic, awe-inspiring Glow Worm Tunnel Walking Track leads you to an old mine tunnel that is home to thousands of glow worms, clinging to the damp walls. Be sure to switch off your torch and keep quiet while you wait for the tunnel to be lit up with pinpricks of light.

Just note, the tunnel itself is pretty dark and slippery and do your best to keep your noise levels low (no matter how excited you are) because these lil' glow bubs are pretty sensitive to sound. 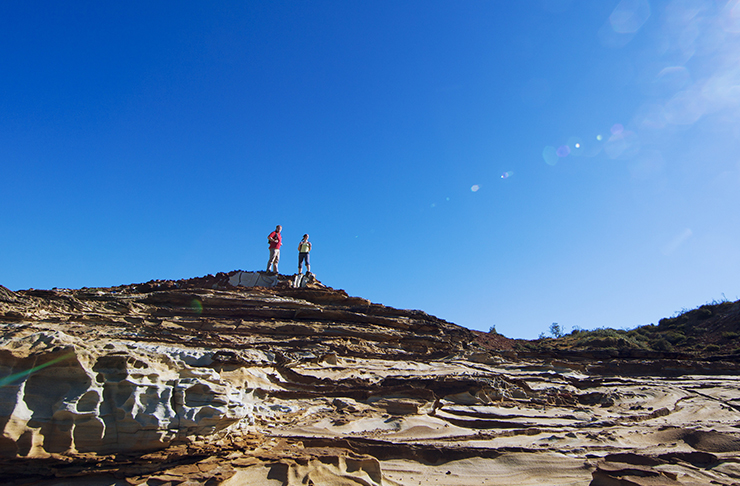 Also known as The Coast Track, the Bundeena To Otford hike stocks magnificent white-cliff coastlines in the North and rugged beaches to surf in the South (Garie Beach and North and South Era). Accessible by public transport (train to Cronulla, ferry to Bundeena, train back to Sydney via Otford), this gem of a walk has sprawling rainforests, hidden waterfalls, rock pools and a beachside campsite for those looking to spread the 26km trek over two days. Although becoming increasingly popular with Sydney escape artists, this is a definite addition to your bucket list this year. For your full guide to this hike near Sydney, we've got you covered here.

You’ve probably seen someone you know upload some incredible snaps of Mermaid Pools, so it’s about time you get your butt on the Mermaid Pools and Tahmoor Gorge walk, about a 75-minute drive southwest from Sydney. With a dip in the beautiful Mermaid Pools after as your reward, this is the perfect hike if you’re up for a challenge with some mates (reminder that jumping into these pools is considered dangerous and there have been injuries in the past—be careful and always check for alerts in the area). 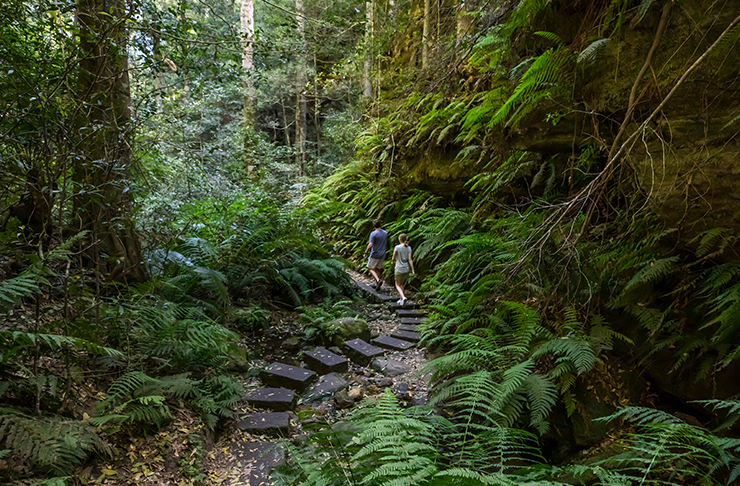 This 5.5km four-hour stroll stars fromNeates Glen Car Park in Blackheath and descends through a hidden rainforest of luscious ferns, trickling creeks and hidden tunnels. You’ll weave through gorges towards the depths of the canyon and then climb back towards Evans Lookout to feast your eyes upon the Grose Valley. 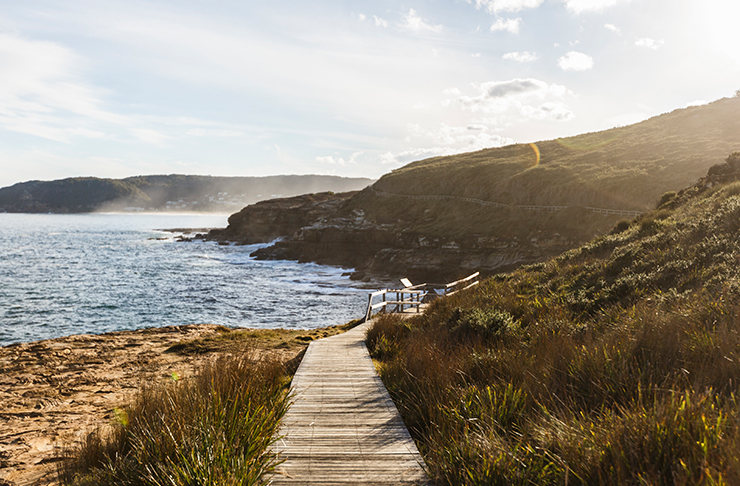 This is an undulating 8km beachcombing trek which is so nice, you should do it twice (which you’ll have to, to return to your car anyway!). Two campsites are nestled on golden beaches along it: Little Beach and Putty Beach, both of which will have your friends furiously double tapping the posts on your Instagram feed. Shipwrecks, wildflowers, whale-watching, deserted beaches... sounds like paradise really (and it is).

Distance: 8 kilometres
Walking Time: 4-5 hours (many turn it into a two-day hike with an overnight stay at the campgrounds)
Difficulty: Clear signage, formed track, some obstacles, short steep hills 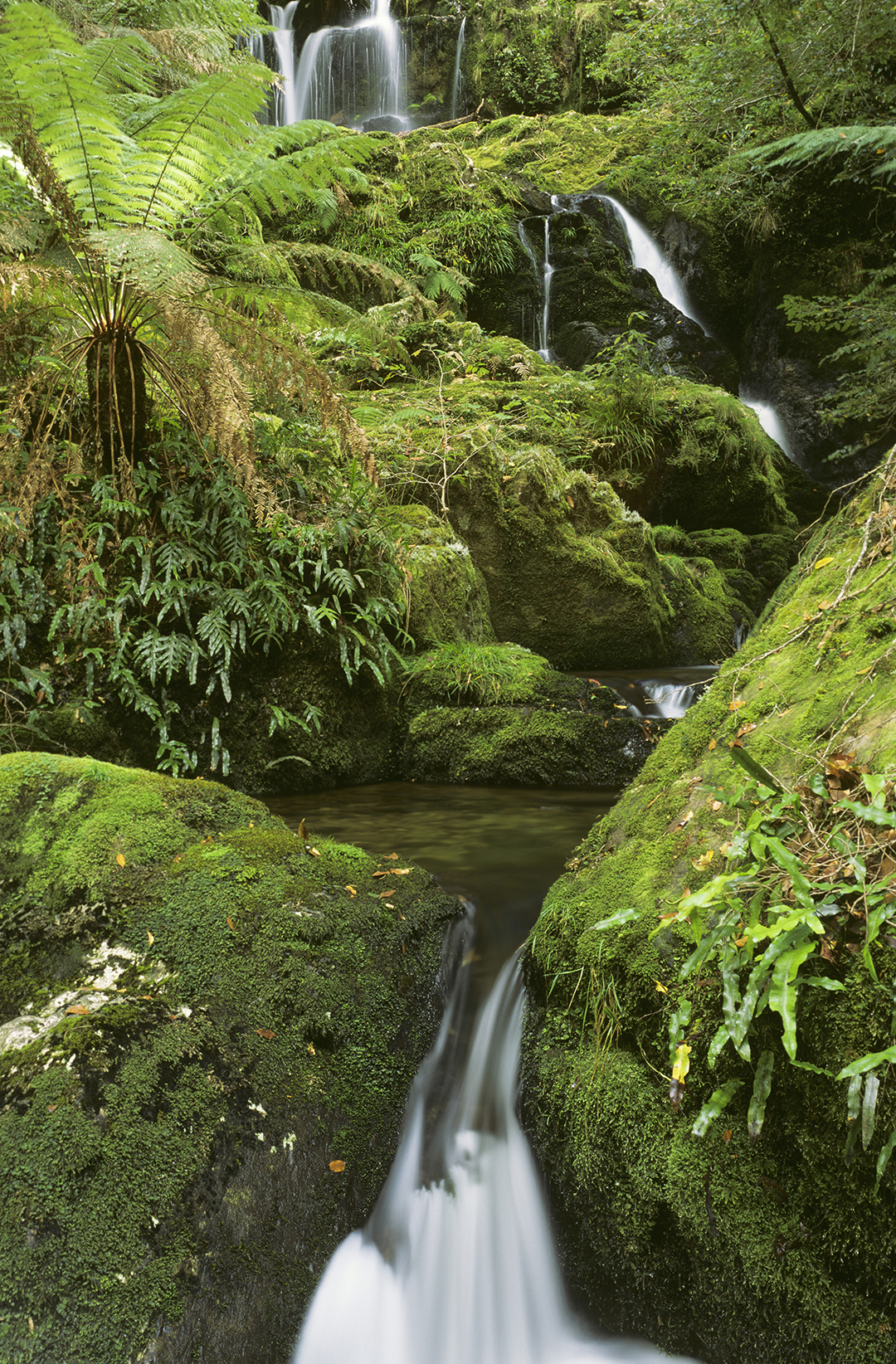 A bushwalker’s utopia, Barrington Tops is a remote section of NSW offering hikers prepared to get off the beaten track the sweetest of rewards. Gloucester Tops Circuit is the standout loop as it combines three of the park’s best walks into a manageable 7km trek. From towering snow gum forests and moss carpets to lively swamp wallabies and grey kangaroos, it’s an almighty experience that is best included as part of a long weekend of 4x4ing, mountain biking, and wild swimming in the National Park.

The beauty of this walk is that there is no need for a combustion engine! Catch the train from Central to Mount Ku-Ring-Gai station and follow the 10km walking track as it weaves down through precarious rock overhangs and narrow gorges. There are two undisturbed bush campsites by the creek where you can rest overnight, before a sweat-drenching climb back out towards your train back home.

The Karloo Walking Track is a medium track ideal for those wanting a quick nature fix in Sydney. The walk leads you to Uloola Falls where you can picnic the day away while gazing upon the scenic waterfall and natural surrounds. You can even make a weekend out of it, camping at the popular Uloola Falls campground, but bookings need to be made in advance.

Staying in Sydney? Check out this list of the city's prettiest walks.