Where To Find Brisbane’s Best Reuben Sandwiches, According To You

A classic creation of five basic elements (pastrami, sauerkraut, Russian dressing, cheese, and rye), the Reuben is about as good as a sandwich can get.

We asked Urban List readers for their picks of the best Reuben sandwiches in Brisbane, and these are their favourites.

It goes without saying that a joint called Reuben's will do a decent sanga, and our readers overwhelmingly suggested that these guys do the best one in town. Their signature creation is a true New York deli-style sandwich of pastrami layered with Swiss cheese, sauerkraut and Russian dressing grilled between slices of deli rye. These guys cure beef brisket for 12 days in a brine before smoking and steaming it for the ultimate melt-in-your-mouth goodness.

Legend of Dovetail on Overend’s Reuben has flown far and wide since its conception years ago. The stack of pastrami, gruyere, sauerkraut and house-made Russian dressing is already tantalising, and it's even available gluten-free, if you need. You can add on a New York deli-style pickle for $1, and you'd be crazy not to.

We reckon it should ALMOST be mandatory to order a beer alongside a Reuben, and the folks at Saccharomyces definitely have you sorted in that regard, with twelve rotating taps of craft beers and plenty in the fridges to work your way through. Their Reuben ticks all the boxes with pastrami, slaw, cheese, chipotle mayo, mustard and pickles on light rye, and wedges on the side.

A super cute deli in Woolloongabba's foodie precinct, Mr Badger's is all about the American classics. Their Reuben is a textbook example served on deli rye, and you can even scoff it at a table inside an old-school tram inside the restaurant. 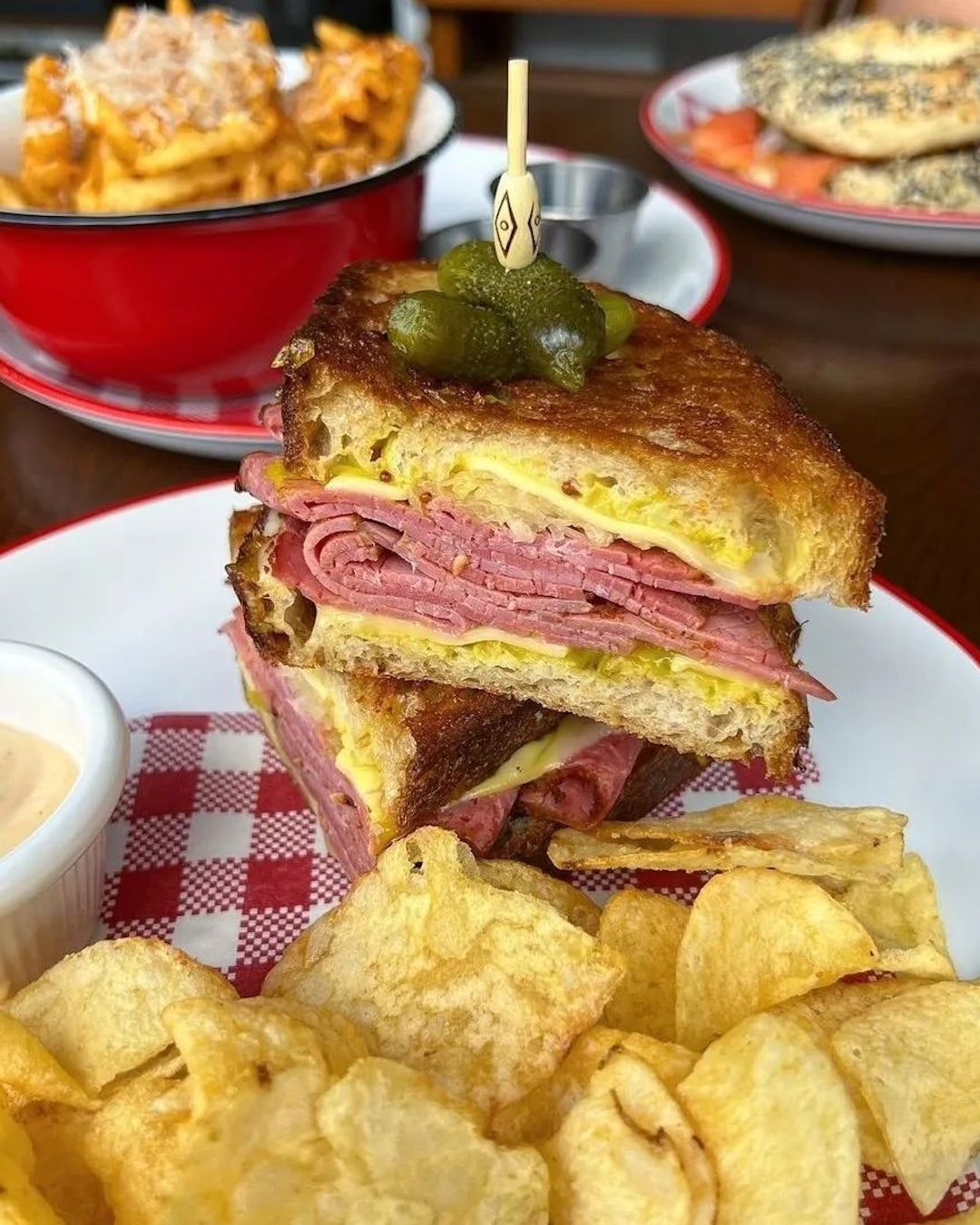 Now for something a little bit different... Super funky bar Mongrel is serving up "The Rooben", with house-made kangaroo pastrami, berry-pickled cabbage, raclette, dill pickles, mustard and burnt garlic Russian dressing on rye for a seriously tasty twist on the classic that's begging to be paired with a beer.

As an American-style eatery, 5 Boroughs would be remiss if they skimped on anything, especially when it comes to such hallowed turf as the iconic all-American sanga. Their Reuben contains a heft of corned beef, Swiss cheese, kraut and all the usual suspects betwixt the darkest, heartiest rye you could ever have the pleasure of noshing. Pair with a Brooklyn lager, and you might as well be on a NYC stoop.

This relaxed suburban wine bar does epic snacks, and their Reuben absolutely fits the bill for pairing with something cold. As well as the delicious drops on offer, The Old Seven is known for their loaded jaffles, and their take on the Reuben, with 12-hour slow-cooked corned beef, sauerkraut, Swiss cheese, mustard and mayo is a drool-worthy favourite.

While it isn't necessarily traditional for a Reuben to be served between a bagel, there's no denying it's damn delicious. NYC Bagel Deli's comes with all of the required fillings, and you can have your Reuben on a standard, poppy seed, sesame seed, garlic, onion, everything or jalapeño wholemeal rye bagel.

We’ve seen amazing ryes, sauces from scratch, inventive use of cheese, and fun things with meat but Tippler’s Tap has taken it upon themselves to rep it for the kraut. Theirs is possibly the most kraut-heavy sandwich in Brisbane, the kraut content almost equalling the quantity of thinly sliced corned beef. Tippler’s also does their Reuben in miniature as a slider so you can have, like, eight.

Straight off the Flat Grill menu at DannyBoys, their Reuben comes with hot peppered pastrami, Swiss cheese, sauerkraut and thousand island dressing, and our readers shouted this one out for its magical ability to cure a hangover.