Find Out The Latest News On COVID Restrictions In Melbourne

Stay up to date with our live list of the latest updates of restrictions around Melbourne.

The Victoria/NSW border will close as of 11:59pm Tuesday 7 July.

"We have – all of us – agreed that the best thing to do is to close the border," said Premier Andrews.

"That closure will be enforced on the NSW side, so as not to be a drain on resources that are very much focused on fighting the virus right now across our state.”

More details will be released later on Monday.

"Hot spot" suburbs will revert to stage 3 lockdown as per an announcement by Premier Daniel Andrews today.

“These are extraordinary steps, these are not things we have had to do in the past but such is the nature of this virus, it is so wildly infectious that if we don’t take these steps now we will finish up in a situation than locking down ten postcodes we will be locking down every postcode,” Andrews said.

From 11:59pm Wednesday 1 July the following suburbs will revert to the four reasons to leave your home as indicated in the initial stage 3 lockdown:

“There will only be four reasons that you are permitted to leave your house and only if you really have to,”

For work or school, for care or caregiving, for daily exercise, for food and other essentials. They are the acceptable reasons to leave, but only if you need to.” Andrews said.

Unfortunately this week we've seen a spike in cases around Melbourne.

Premier Daniel Andrews announced today that some of the restrictions that were due to be eased from Monday 22 June will stay the same, and some will go back to previous levels.

"From 11:59pm on Sunday, the number of visitors you can have at your home will reduce to five. Outside the home, families and friends can meet in groups up to ten.  As we’ve seen across the world, this virus has the ability to turn a few cases into hundreds in a matter of days.

That’s why we also need to delay an increase to gathering limits in businesses and community facilities.

That means restaurants, pubs, auction halls, community halls, libraries, museums and places of worship—will all stay at a maximum of 20 people in any one space until 12 July. Businesses that were set to open on Monday like gyms, cinemas, theatres and TABs can do so—but again, only with a maximum of 20.

Community sport for kids and non-contact competition for adults can proceed as planned. Ski season and accommodation facilities with communal spaces will also open, but with increased screening and safeguards in place." said Premier Andrews.

Further restrictions will ease in Victoria from Monday 22 June.

Libraries, community centres, and halls will be able to open to 50 people. Religious ceremonies will now be permitted 50 people also.

Importantly, pubs in Melbourne will be allowed to have 50 seated patrons in the venue. And you'll be able to order beers without having a meal as well.

We've all heard that Melbourne restaurants, cafes, and bars will be reopening from Monday 1 June, but further advice was released by premier Daniel Andrews this morning.

From Monday 1 June there is no list of reasons to leave home, you can leave home for any reason. This is due to the great effort Victorians have gone to recently in staying safe and staying home when possible.

However, working from home is still a must in Victoria where possible.

To date, we’ve left the ins and the outs of how this will work to Victorians and their employers.

But going forward—and in light of new evidence indicating increased activity—the obligation for employers to keep their staff working from home will now be included in the Chief Health Officer’s directions.

As we’ve said from the start, our actions will always be guided by evidence.

Right now, we can’t have the usual number of people on our trains, trams and buses—it just isn’t safe.

And we know that if just half the people who normally use public transport start driving to work, we will see our freeways and other major roads grind to a halt.

The number of people on the roads and the transport network is already starting to increase and we cannot let that creep continue.

If we do, then we’ll see commute times worse than anything any of us have ever experienced – two hours from Werribee to the city, 90 minutes from Reservoir and two and half hours from Mulgrave."

Earlier today, Premier Daniel Andrews made a statement which will see some lockdown laws in Victoria eased further beginning on Tuesday 26 May, with most rolling out at 11:59pm on Sunday 31 May.

“The whole way through this pandemic, our advice to Victorians has remained the same: “stay home”. Now, as we begin to settle into a new normal, our message is “stay safe”. That means maintaining your physical distance. Using common sense.

And as we ease restrictions, each of us playing our part to keep one another safe.” said Andrews.

The announcement includes the re-opening of public spaces such as outdoor gyms, skateparks and playgrounds, along with swimming pools and some campgrounds. More people will be allowed to attend significant ceremonies such as weddings and funerals, and cultural venues like museums, galleries and drive-in cinemas can operate under specific restrictions.

For the time being, however, it’s still recommended that those who are able to work from home continue to do so.

The points from the Premier:

Today Premier Daniel Andrews has made a statement regarding pubs, cafes, and restaurants.

"After smashing through our goal of 50,000 tests in the last week, the results of this data has given us the confidence we need to plan to slowly start lifting some more restrictions.

Today, and informed by the advice of the Chief Health Officer, I can announce our cautious and careful next steps.

The continuing low numbers of community transmission and the high rates of testing give us confidence that cafes, restaurants, pubs and other hospitality businesses can begin planning for a phased re-opening from the beginning of June.

From 1 June – cafes, restaurants and pubs will be able to reopen their doors to serve meals to up to 20 customers at a time per enclosed space.

From 11:59pm Tuesday 12 May Victorians will be able to have 5 of their friends or family visit their home. Keeping it within a group of family and friends allows health services to trace the virus is another outbreak occurs.

Schools will not be going back just yet. Families have been told to expect that kids will not return to school as normal this term.

Melburnians can expect these rules to be in place for the rest of May.

The points from the Premier:

Prime Minister Scott Morrison held a press conference on Friday 8 May to discuss the expected three-stage plan to get back to a normal economy by July.

The stages states and territories will take can be seen in the plan below, each state and territory taking the next step as they see fit. Stages will be reviewed every three weeks.

Premier Daniel Andrews has announced that Victoria's restrictions will remain in place until at least Monday, after Mother's Day.

"This morning we had a very good national cabinet meeting," Mr Andrews said.

"Whilst I welcome the overall pathway, I also welcome the commentary from the Prime Minister that what is done and when ... is fundamentally a matter for state and territories. The rules remain in place until Monday." 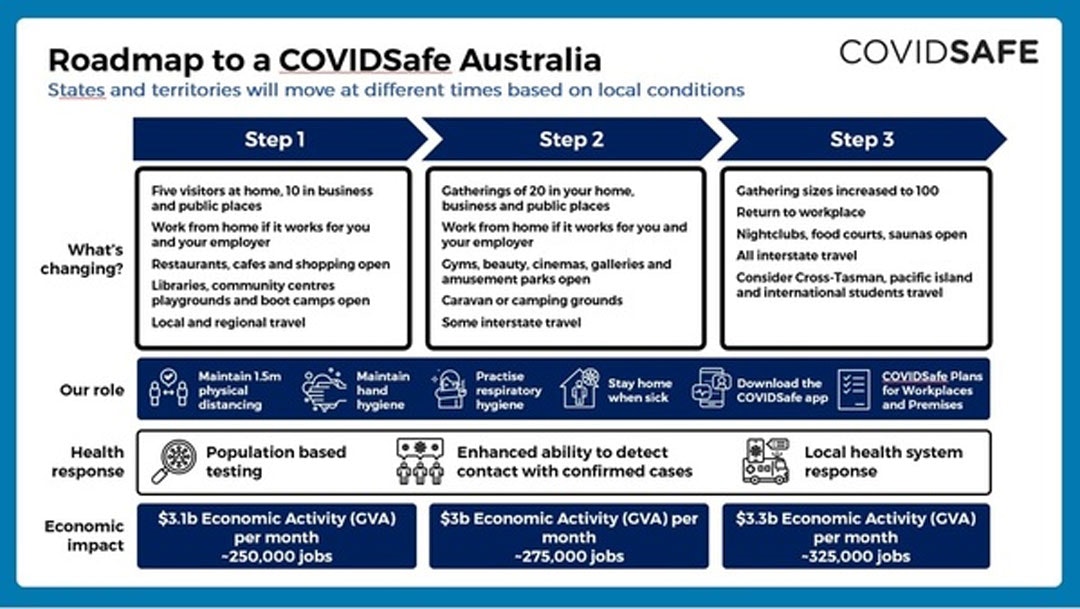 Most Melburnians have spent the last month or more mostly in isolation.

With four hard and fast rules to adhere to, Victorians have done a great job in helping curb the spread of coronavirus and flatten the curve.

All this points to a time when the lockdown rules begin to ease, but when will the lockdown end in Melbourne?

At this point, there is no firm date as to when restrictions might start to be rolled back.

"I don't think it is possible to have cafes, restaurants and bars open anytime soon," Mr Andrews said.

"But I don't want to speculate too much. These numbers are not an invitation for us to simply remove all the rules.

"They're a validation our strategy is working. It is challenging but it is working."

Prime Minister Scott Morrison has confirmed that lockdown rules will be in place until at least mid-May. With states to ultimately determine what happens after that.

It looks like take away and delivery from our favourite restaurants and cafes will be the norm for a while, we've got a live list of what's available around Melbourne here.