12 Reasons You Need To Visit The USA This Year

Let’s be honest, no bucket list is complete without an appearance from the USA. From the Hollywood Hills and Golden Gate Bridge to Texan BBQ and deep-dish pizza, there’s no shortage of things to see, do and—most importantly—eat!

To inspire your wanderlust, we’ve teamed up with Air New Zealand to let you in on the 12 things you absolutely must do in America. The Kiwi airline flies non-stop to Los Angeles, San Francisco, Houston and—as of November 30—they’ll also jet into Chicago.

Check out our 12 must-dos below and for more inspo, check out their crew tips for what’s cool in the USA. Start planning, people!

It wouldn’t be a trip to LA without experiencing the sights and sounds of Venice Beach. Work out at Muscle Beach’s outdoor gym or, if that’s not your thing (you are on holiday), relax on the sand and watch everyone else working up a sweat. The skate park also offers fab people-watching! After getting some sun, walk over to Abbot Kinney Boulevard and wander the uniquely LA boutique stores.

Sitting pretty on Mount Hollywood, Griffith Observatory is arguably the world’s most famous observatory. You know? The one from Rebel Without A Cause, Charlie’s Angels and—most recently—La La Land. See a show in the planetarium and soak in views of the Hollywood Sign and beyond.

Speaking of Hollywood, jump aboard a celebrity homes tour and geez at the lives of the rich and famous. You’ll see the homes of all your faves like Michael Jackson, Leonardo DiCaprio, Jennifer Aniston and T-Swift. Double points if you spot a celeb!

A hop, step and a jump from San Fran (aka less than a two-hour drive), Napa Valley is an unmissable wine region. You’ll never go thirsty (or hungry) with more than 400 wineries to discover alongside top-notch restaurants. Sign. Us. Up. Pro tip: visit between January and March and the valley blooms in a carpet of yellow mustard flowers.

If you thought Ponsonby villas were cute, just wait until you see San Fran’s Painted Ladies. Built in the 1890s, the Victorian houses are total #goals. You’ll recognise them from the opening credits of Full House—the Tanner family have a picnic in front of them, remember? Pack a picnic of your own and belt out “everywhere you look, everywhere you go…”.

When it comes to fine dining, San Francisco has got it going onnn—it has 55 Michelin-starred restaurants. Check out the best of the best at the likes of Benu, Coi, Manresa and Quince—they all have the prestigious three-star title and we can guarantee you’ll be tempted to eat your way through them all!

Built in 1921, the Chicago Theatre was the first of its kind and to this day is oh-so lavish. It will leave you breathless with its grand lobby, majestic stairs and seven-storey high theatre. Nab tickets for a play, comedy show or concert—the likes of Kayne West, Beyoncé and Prince all have performed here.

Baseball is to Americans as rugby is to Kiwis. So, when in Chicago, Wrigley Field should be at the top of your hit list. The field is America’s second oldest ballpark and home of the much-loved Chicago Cubs. No game is complete without munching on a hot dog and donning a baseball cap, obvs.

If you didn’t eat a deep-dish pizza, did you even go to Chicago at all? The city’s signature pizza boasts a super high edge, allowing for said pizza to be loaded with cheese and chunky tomato sauce—yass! Sign up for a pizza tour to discover the city’s best. 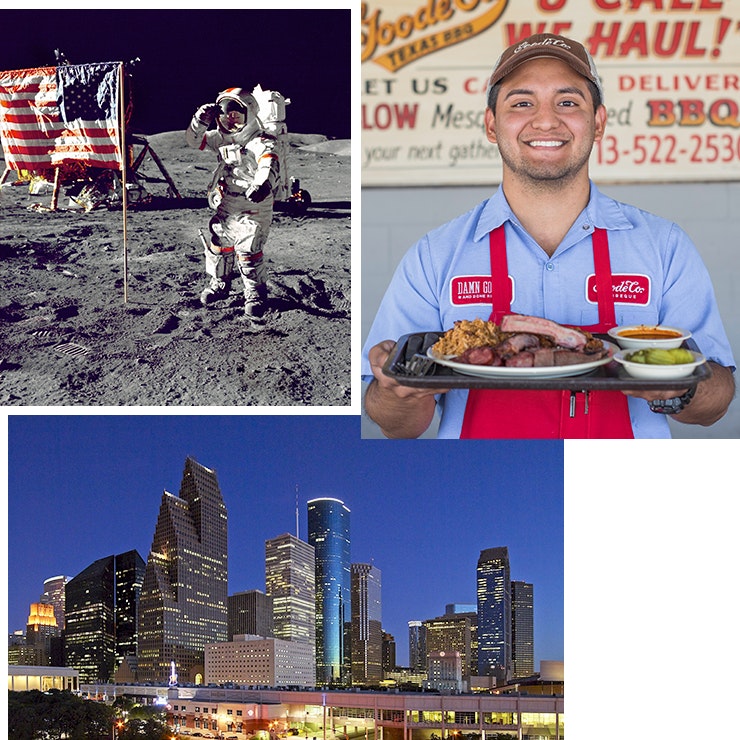 If there’s one thing Texans love, it’s meat. And, in Texas’ largest city, you’re never far from your next BBQ fix. Devour low ’n slow hunks of beef brisket, finger-licking ribs and everything in between at the local smokehouses. Our advice? Arrive hungry and leave your diet at the airport.

Wardrobe in need of a refresh? You’ve come to the right city! Houston is home to Texas’ largest shopping mall aka The Galleria. There are 400 stores and restaurants as well as an ice rink and multiple swimming pools #justcasually. All your fave stores are there including Sephora, Zara, lululemon and Tiffany & Co.

Space nerd? Make a beeline for Houston’s Space Centre. Here you’ll be able to walk through the replica of a space shuttle and station (BYO astronaut costume). Touch a rock from the moon and learn about NASA’s upcoming mission to Mars—so cool!

America top of your 2018 bucket list? We thought so! Get there with Air New Zealand—they fly non-stop to Los Angeles, San Francisco, Houston and Chicago (from November 30).

Editor’s note: This article is proudly sponsored by Air New Zealand and endorsed by The Urban List. Thank you for supporting the sponsors who make The Urban List possible. Click here for more information on our editorial policy.