Auckland’s 10 Best Hot Cross Buns, As Chosen By You

Chocolate may get most of the attention come Easter, but it isn't the only treat we're coveting once the season for bunnies, eggs and unabashed gluttony rolls around. Yip, that's right fam—we're talking about hot cross buns, or HCBs.

Now before all you choccy lovers out there start screaming 'sacrilege', picture this: a perfectly baked bun, flavoured with a heavenly combo of fragrant spices and sweet, juicy dried fruit, topped off with a cute little cross (preferably toasted, and slathered in a shitload of butter). Heck, some bakers might even get a li'l fancy and add chunks of chocolate, swirls of salted caramel... the possibilities are endless.

Whatever way you take 'em, one thing's for sure: these babies are good for the soul (and even better for the stomach). So loosen that belt and prepare to meet your baker, because here are the 10 absolute best hot cross buns in Auckland, according to you. 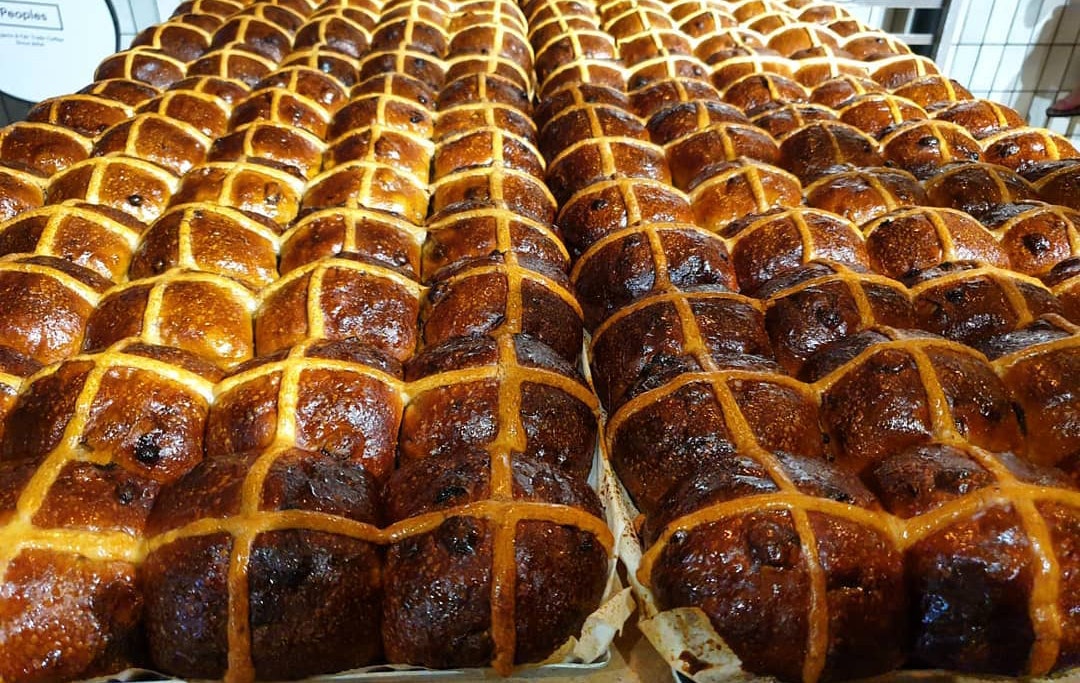 It takes something pretty damn special to tear us away from our go-to cinnamon cruffin at Fort Greene, but their hot cross buns have officially done it. Made with a sourdough starter, these babies are nothing short of an epiphany. Think not too sweet, flavoured with just the right amount of citrus and spice, and with a lovely fluffy texture hidden beneath a beautiful golden shell. We could keep going, but really, just make like Fee (who reckons Fort Greene have mastered the perfect spice level with their buns) and try one for yourself.

A hot cross bun that's gluten-free AND vegan? Now that's what we call an Easter miracle. Head on over to Charlie Mia to enjoy these wholesome treats, which are baked fresh daily and contain all the best bits about an HCB (the flavour!), while being a little kinder on your body (and your conscience). Kathy likes hers slathered in a yummy butter alternative like Nuttelex, which she says makes her feel like she's still indulging. 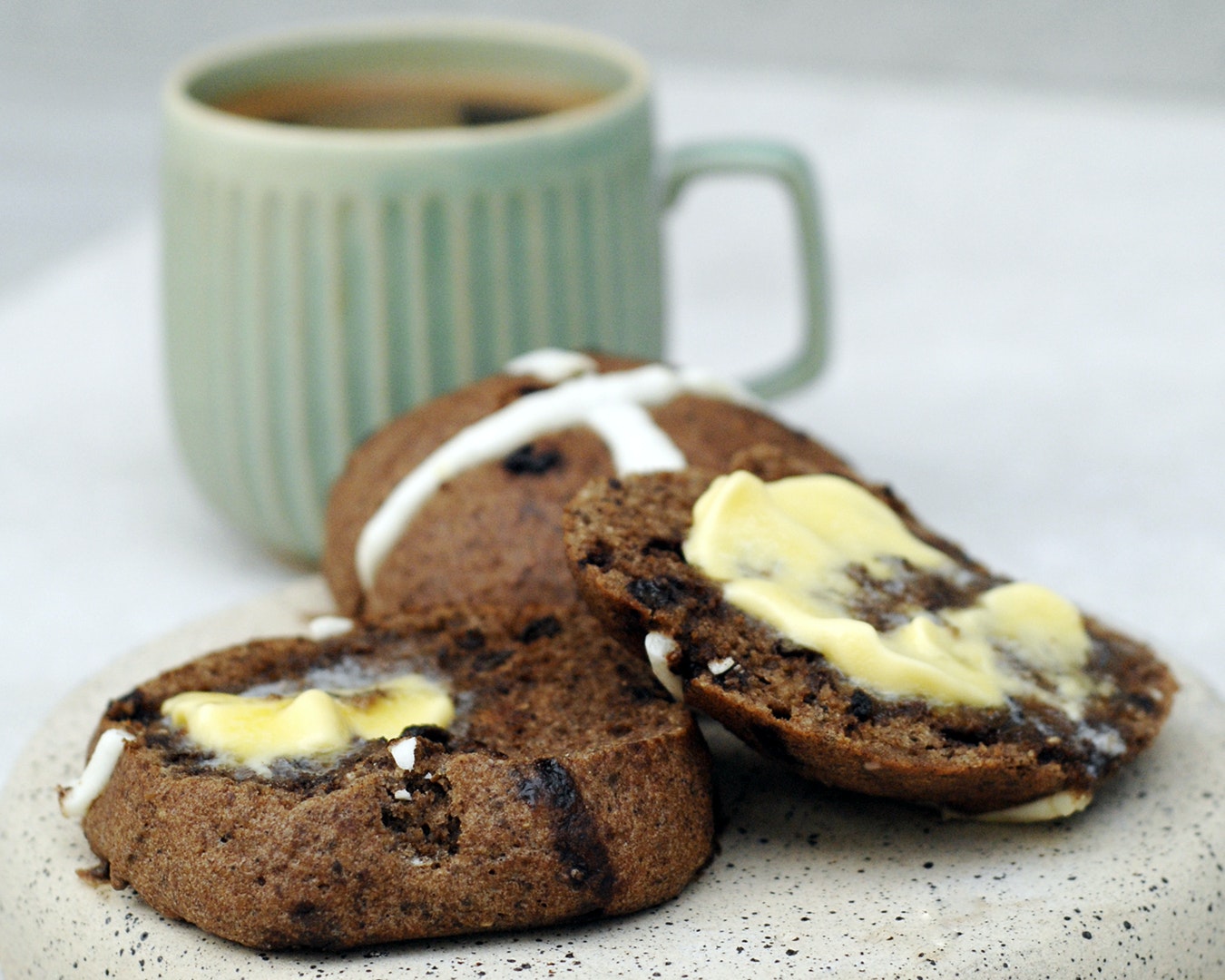 For some of the tastiest HCBs in town, you can't go past Loaf. Whether you like to keep things traditional or mix it up a little (hello, dark chocolate and blueberry), these guys are bringing their absolute A-game this Easter with deliciously dense buns, packed full of flavour. We're particularly partial to their salted caramel offering, which reaches irresistible new heights when paired with a healthy whack of butter. Loaf also offer a keto-friendly version and for that, they get extra brownie points. It's Loaf's selection of flavours that Zoe loves, telling us 'they have a hot cross bun flavour for every situation.'

We're saying a big fat amen to the hot cross buns at Bread & Butter, which we must confess are some of the best in Auckland. And with in-store AND online shopping options available, you have no excuse not to get your hands on some of these irresistibly good Easter treats. The result of a li'l dough-making magic (12 hours' fermentation to be precise, resulting in subtle flavours, a moist texture and easier digestibility), they feature a buttermilk-infused base studded with raisins, apricots, currants and cranberries, topped with burnt butter and spiced cinnamon glaze. And this year there's even a choccy version, with Belgian chocolate in place of fruit (again, amen!). Emil reckons Bread & Butter's HCBs are 'just the best all-round, hands-down', and we don't disagree. 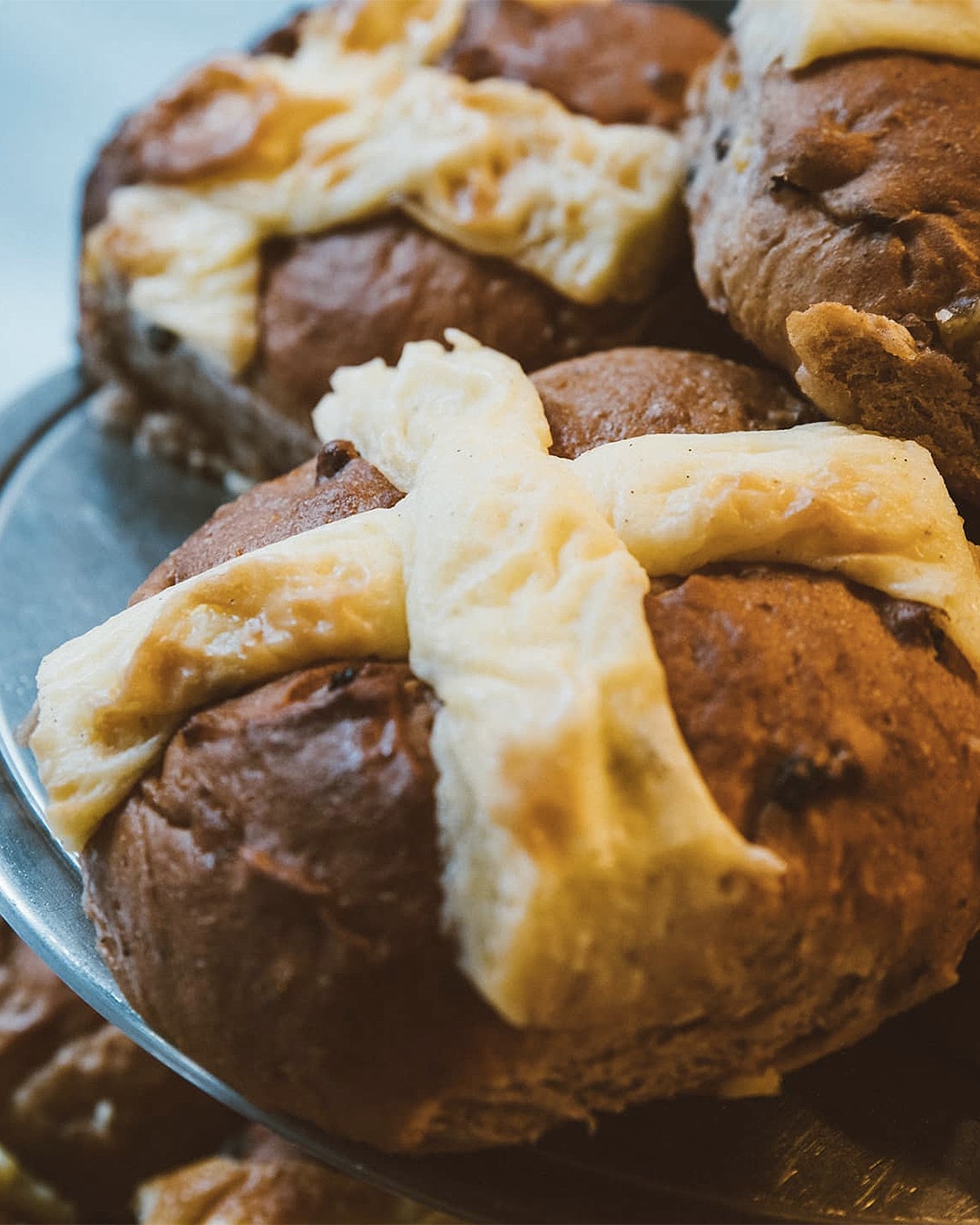 Ima Cuisine's hot cross buns are the stuff of legend, known to cause queues and stop traffic (okay, maybe not that last part, but we have been told that more than 1000 orders were placed for them the day before Easter one year). One bite of these bad boys, and you'll soon discover why they're so popular—the base is deliciously dense, bursting with currants, spices and orange peel, all topped off with a gooey custard cross. That said, we recommend using their online ordering system so you can secure your stash of this coveted treat before—God forbid—they should sell out for the day. Ima's buns were a clear frontrunner for this article, with many of you favouring the custard cross in particular. However, we reckon Tracy puts it best when she says: 'there's no need to explain why (they're the best) if you've tasted one.'

If you're a true hot cross bun aficionado, you'll be familiar with Miann. That's because this CBD spot makes some of the most popular HCBs in the city. So c'mon then, what's the big deal? A decadent chocolate bun flavoured with chunks of housemade dark chocolate, topped off with a chocolate cross, that's what. Or perhaps you'd rather have their traditional version, which also receives our highest praise. Whatever the flavour, we'd strongly advise stuffing your hot cross bun with a scoop or two of Miann's famous gelato. Alchi knows what's up, telling us that Miann's buns taste so good, 'you'll want to go back for more.' 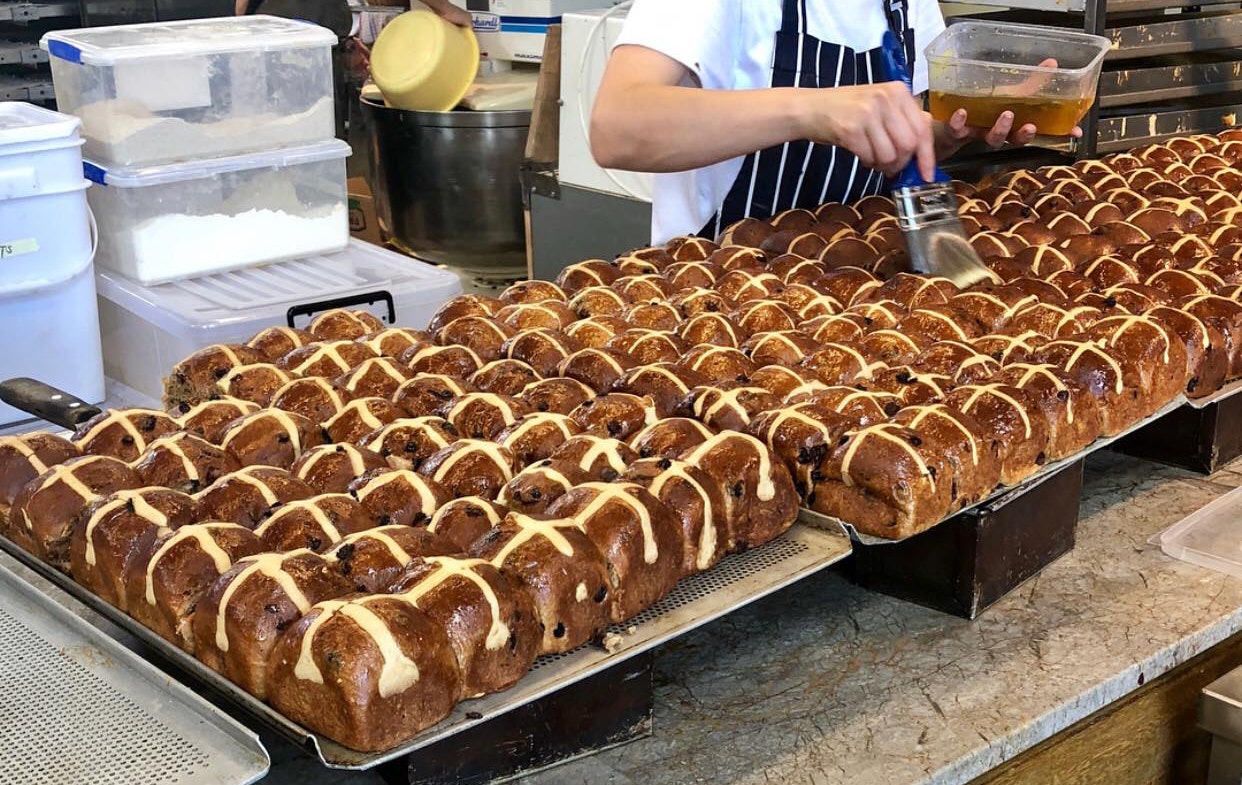 Give us Lord our daily bread, especially when it comes in the form of hot cross buns from one of our all-time favourite bakeries. Daily Bread's version ain't shy on the spice and is filled to the brim with sultanas, raisins and currants soaked in a splash of golden rum (now you're talking). However, it's the sourdough base that's where the magic really happens, resulting in a bun that's springy, moist, and drop-dead DELICIOUS. This year they've created their best version yet, thanks to the ancient Italian method of lievito madre. This three-day-long process gives the buns even more flavour and a longer shelf life, minus the additives. Forgive us, but we'll be going full-glutton on these bad boys. And just to confirm their 'Auckland's best' status, Daily Bread has just been crowned winner of the 2022 Great NZ Hot Cross Bun competition, run by the Baking Industry Association of New Zealand (BIANZ). Yeshmin reckons the reason so many people rate Daily Bread's buns is because 'they're insanely moist and made with only the finest ingredients.'

Blessed be the fruit-filled hot cross buns at Foxtrot Parlour, which are considered some of the best in Auckland. These babies are big on flavour, loaded with all the HCB essentials you know and love (spices, peel etc), and baked with nothing but the utmost love and care. Ella can't get enough of these treats, telling us Foxtrot Parlour's buns are hands-down the best. 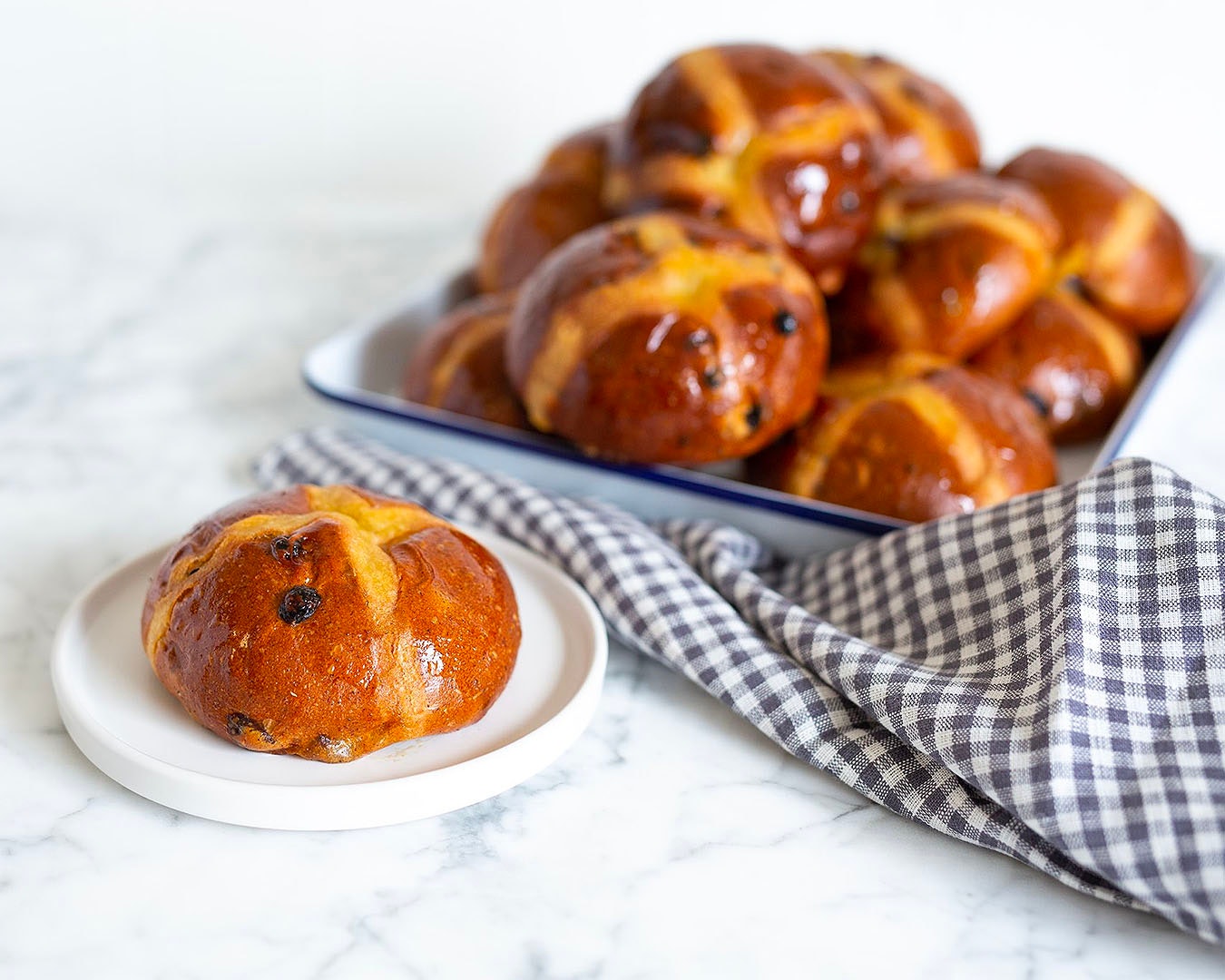 Wild Wheat's hot cross buns are an absolute vision. Baked in individual rounds rather than as a batch, it almost seems a shame to cut into them, but... nah! And you'll be glad you did, because these beauties also deliver on the flavour front, big time. They absolutely nail the balance of fruit and spice, while the bun itself is light, fluffy, and topped off with a crunchy, slightly chewy exterior. One might even say they're Last Supper-worthy. Rebekah agrees, telling us that Wild Wheat's buns have the best fruity flavour, while The Hand Therapy Group simply describes them as next level.

Spice up your life with a hot cross bun (or 10) from La Voie Francaise. These are also baked in cute little individual portions and as you know, we have a bit of a thing for that. However appearances aren't everything and lucky for us, these ones taste just as gorgeous as they look. Little clouds of bready goodness studded with soaked raisins, cranberries and orange peel then slathered in a sweet and glossy glaze, they'll legit bring your tastebuds to life (and our best hot cross buns poll shows that you agree). 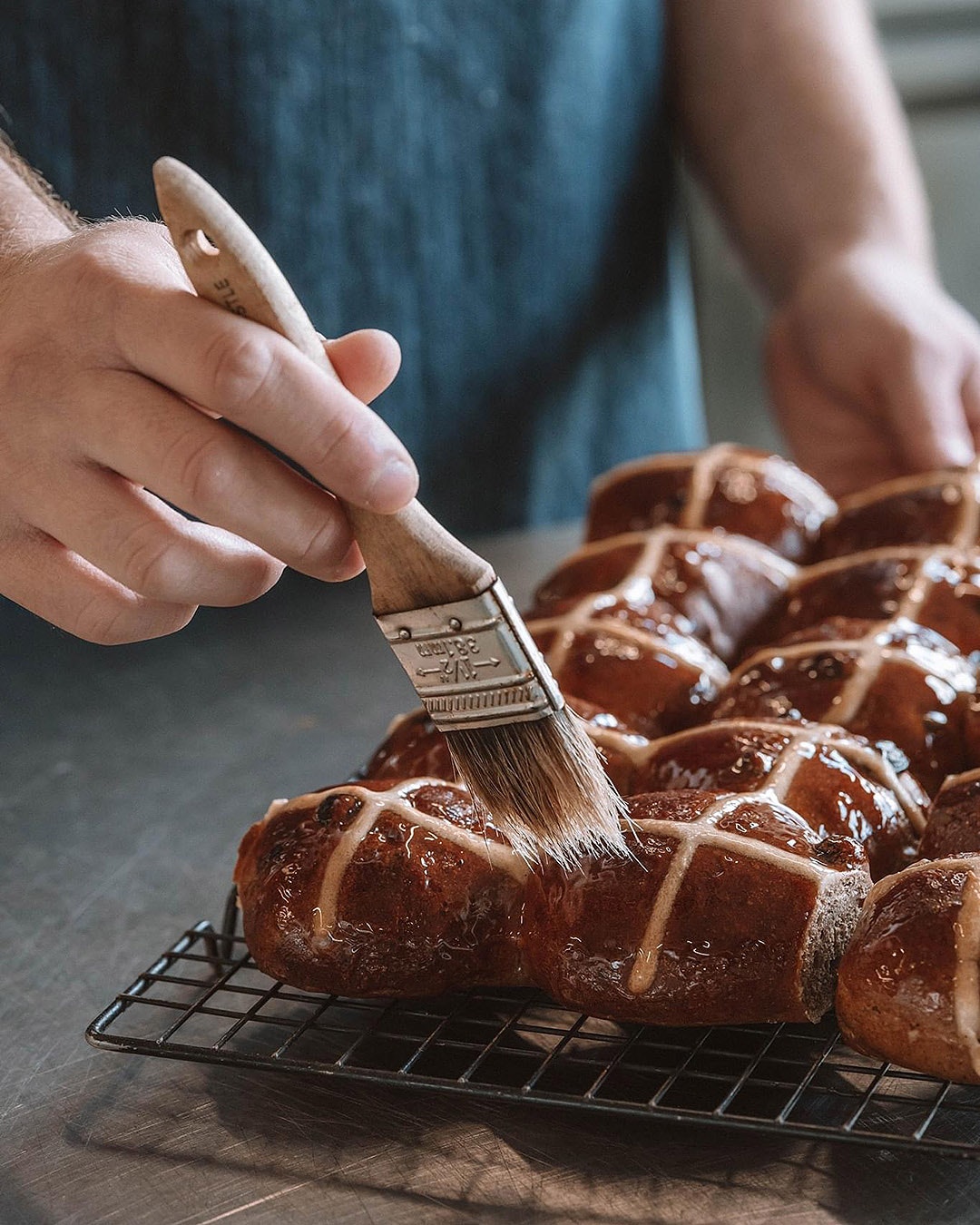 French pâtisserie, La Petite Fourchette are giving their hot cross buns the Parisian treatment this year, bringing us a dark, wonderfully dense number doused in a sticky glaze (oh la la). For optimum indulgence, we recommend wrapping your bun around one of their delicious mendiants (cute li'l choccy discs studded with fruit and nuts), because when in Paris...

It's common knowledge that Giapo makes some of the best ice cream in Auckland, but did you know that at Easter, they also make a pretty amazing hot cross bun? And what's more, it's a gluten-free one (these guys became a dedicated gluten-free facility about a year ago). Yup, if you're living the GF life, you're gonna want to get your lips around these golden goodies stat, which are easily recognised by their big fat cross. Stuff yours with some of Giapo's freshly churned ice cream for the ultimate noms.

The Pantry At Park Hyatt Auckland

How do you like the sound of HCB's loaded with roasted cinnamon pecans and Valrhona Dulcey (a gorgeous, golden choccy), then doused in a sticky caramel sauce? Or perhaps a more traditional bun, pumped full of Earl Grey-soaked currants and sultanas, then blended with the likes of cardamom, tonka bean, and black pepper? Created by award-winning pastry chef, Callum Liddicoat, you'll find both of these game-changing options up for grabs at Park Hyatt Auckland's all-day eatery, The Pantry.

We love their pastries and breads beyond measure–but at Easter time, we only have eyes for Amano's hot cross buns. So what's their secret, you ask? A sprinkle of something old mixed with a dash of something new, actually. These guys have paired traditional HCB ingredients with farm-fresh orange juice and a citrus-spiced glaze for a game-changing bun that will legit bless your tastebuds. And did we mention they also do a chocolate version?

Jason Hay, you've done it again. Yip, the multi-award-winning baker and owner of Richoux Patisserie has cranked out yet another glorious treat for us and as you may have guessed, it's his hot cross buns. If you like a traditional bakery-style HCB pumped full of juicy fruit, these babies are solid, and it seems we're not the only ones who think so because they've won a ton of awards.

You know them for their showstopping pies, but did you that The Pie Piper also make dangerously good hot cross buns? These hand-rolled hotties are a true labour of love and are a fairly new addition to the menu, but we're life-long converts already. That's because they tick all the right HCB boxes with their perfect blend of fruit and spices (along with a li'l mixed peel for added flavour), all wrapped up inside a divinely soft dough.

Did someone say stout-infused hot cross buns? Hell yeah they did, and it was The Real Bread Project. A game-changing take on the traditional HCB, these hearty treats have become something of an Easter icon (Pastrami & Rye were even selling them one year as part of a hot cross bun bacon butty, omg). This year you'll find them at The Real Bread Project's very own store in Helensville. Made from all the traditional bits and pieces (think raisins, sultanas and candied mixed peel) and house-brewed stout, these are by far the most unique buns on this list.

Now technically this one isn't an HCB (for obvious reasons), but when devouring Scandibunz drool-worthy (K)not Cross Buns, we couldn't help but draw a comparison. Taking inspiration from three different treats—the traditional Scandinavian Vörtbröd (a spiced, malted rye bread with raisins), the classic hot cross bun and Scandibunz very own cardamom bun—this holy trinity of treats is where it's at this Easter. Bursting with festive flavours including rich notes of gingerbread, then slathered in a gorgeous coffee glaze, these are what we call Scandi-lously good.

Why not pair your decadent hot cross bun with one of the best coffees in Auckland?