The 10 Best Pies In Auckland, As Chosen By You

As Kiwis, a love of pies is practically in our DNA. These hearty pastries have been keeping us fuelled for generations and are the perfect meal for lunch, dinner, or even a cheeky brekkie. But not all pies are created equal, so we've put together a list—with your help—of Auckland's absolute best to help you sort your pies, from your pie nots.

So in no particular order, here are Auckland's best pies, according to you. Let the munching begin. 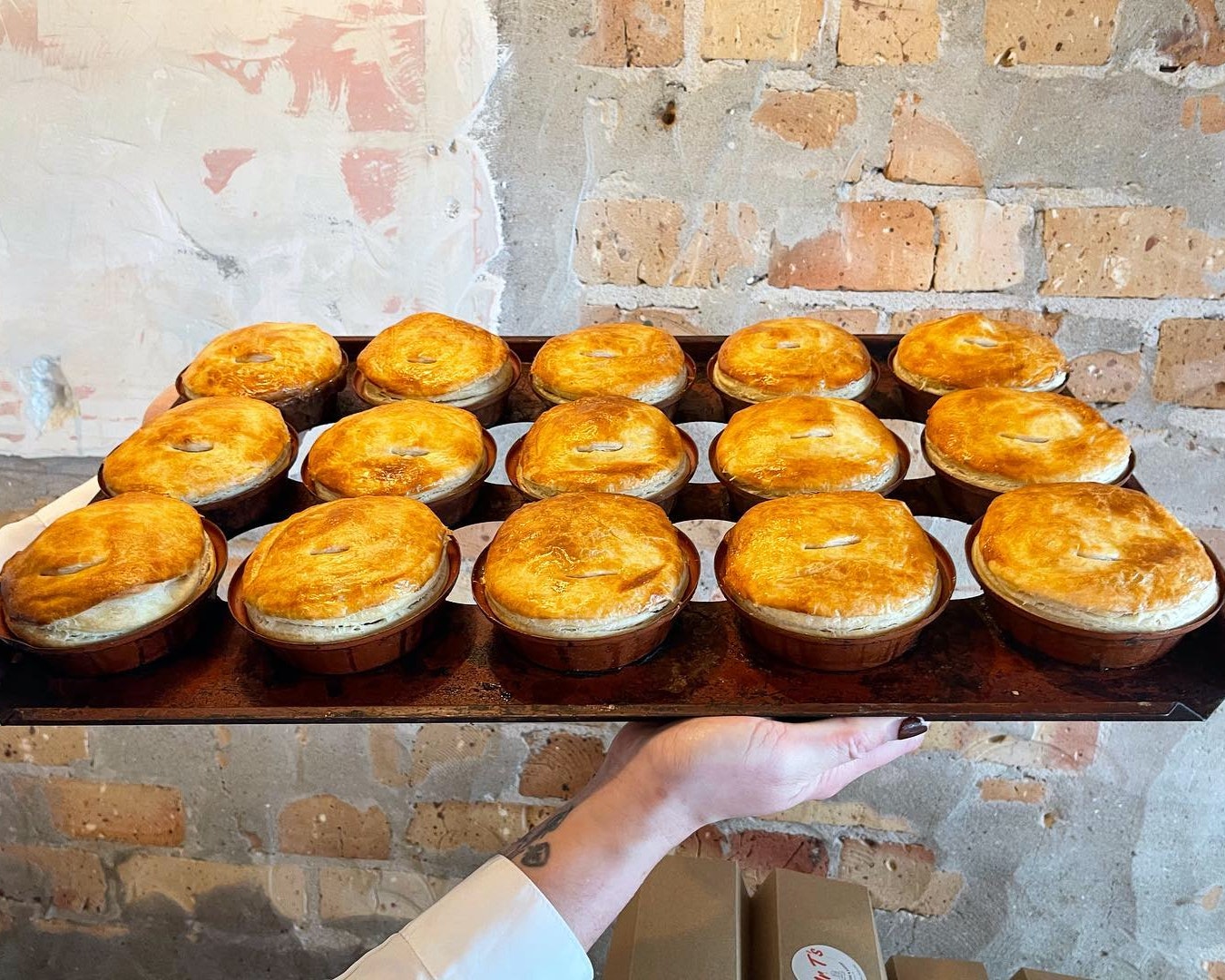 Onehunga's pie game is strong, with the first of the burb's eateries making it into our top 10. We're talking about Mr T's, the much-loved bakery and café that merges classic treats with Vietnamese-style dishes and is especially loved for its mouthwatering pies. Yip, we'll be damned if there's anything better than tucking into one of their perfectly bronzed, piping hot steak and cheese numbers on a cold winter's day. Again, you guys rate their pastry—in fact, Hana says it's the best pastry out. 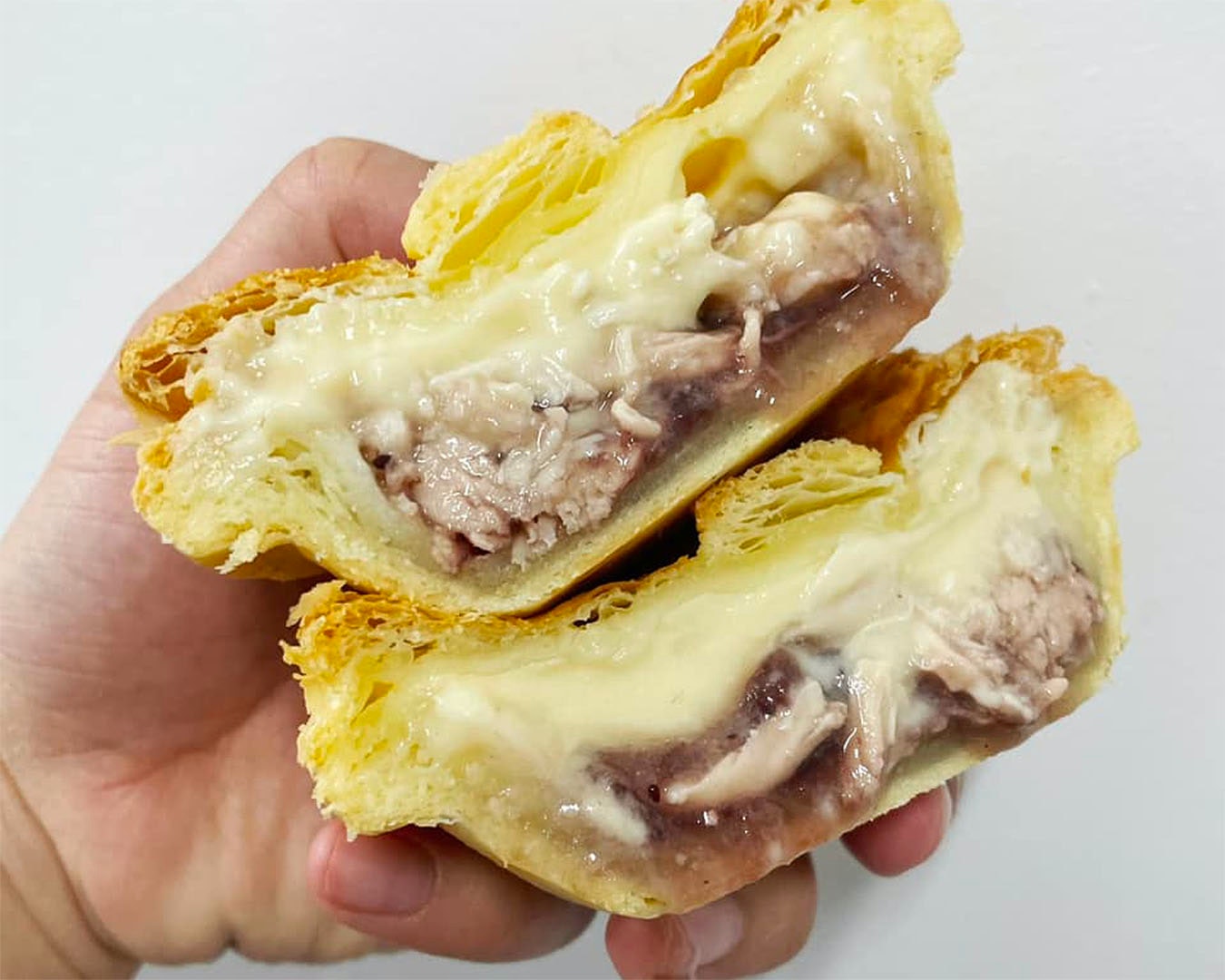 The only thing better than Loafers' famously huge cookies? One of their hefty AF pies. Jump in the queue (quite literally) at this North Shore fave, and prepare to make what could be the hardest decision of your life—butter chicken, or chicken cranberry (pictured above and actually just two of the many flavours available). The pastry on these is textbook, serving up a perfect crunch before giving way to a bulging layer of gourmet filling. Terri can't get enough of Loafers pies, telling us that the pastry has just the right amount of flakiness and is so tasty (adding that they were a Godsend over lockdown). 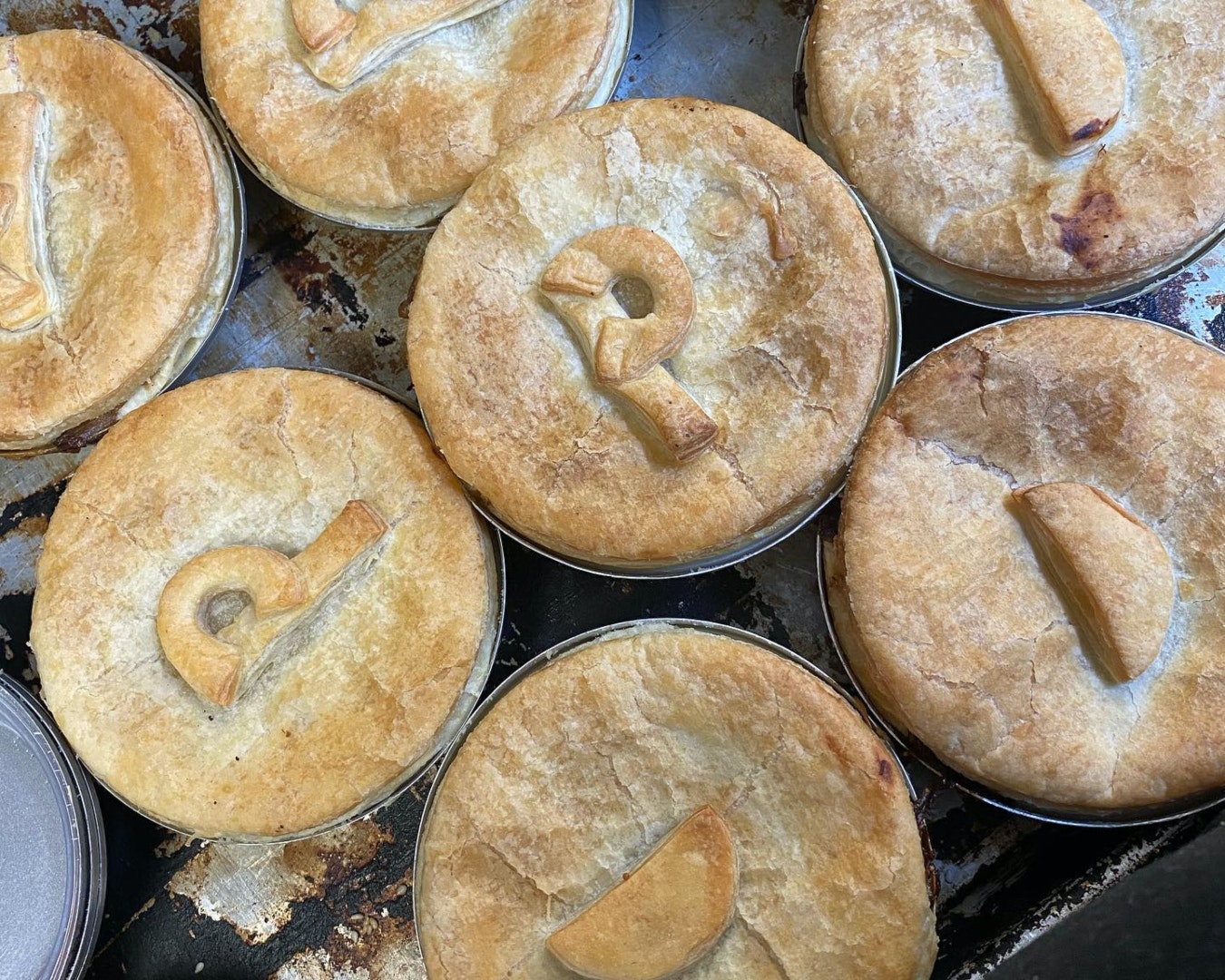 Onehunga residents, you're a lucky bunch to have a spot like Lunchroom in your midst. Despite the name, this one is far from your average lunch bar and is knocking it outta the park with next-level doughnuts, sammies, cakes—and some of Auckland's best pies. We're obsessed with their unlikely flavour combos, which in the past have included the best-selling corned beef and silverbeet, and beef and stout (made with Epic Beer's Extra Stout Ale, naturally). The reason James rates Lunchroom's pies so highly? Well for starters, they beat a Big Ben any day of the week, but they're also a good price. 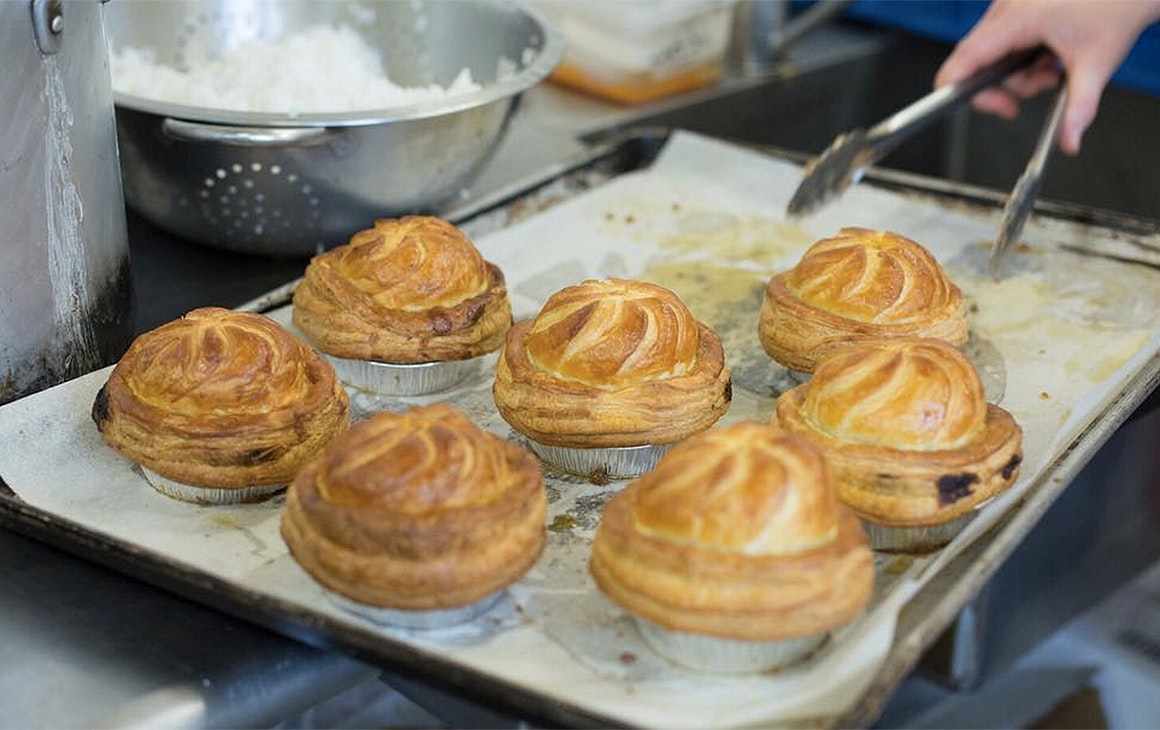 You're no doubt well-acquainted with Little & Friday's mouthwatering sweets, but did you also know that they make a mean pie? Combining handmade flaky pastry with free-range meat and organic produce, these are like the kind of pies your Grandma would bake—only on steroids (just look at the size of that lid!). They even come in individual foil cups, which is exactly the type of extra detail we love. Our fave flavour here has to be the mince and cheese, though the chicken and leek ain't a bad second choice by any stretch of the imagination. Kat loves Little & Friday's pies for their sophisticated flavours but is most impressed by their size, telling us they're a meal unto themselves. 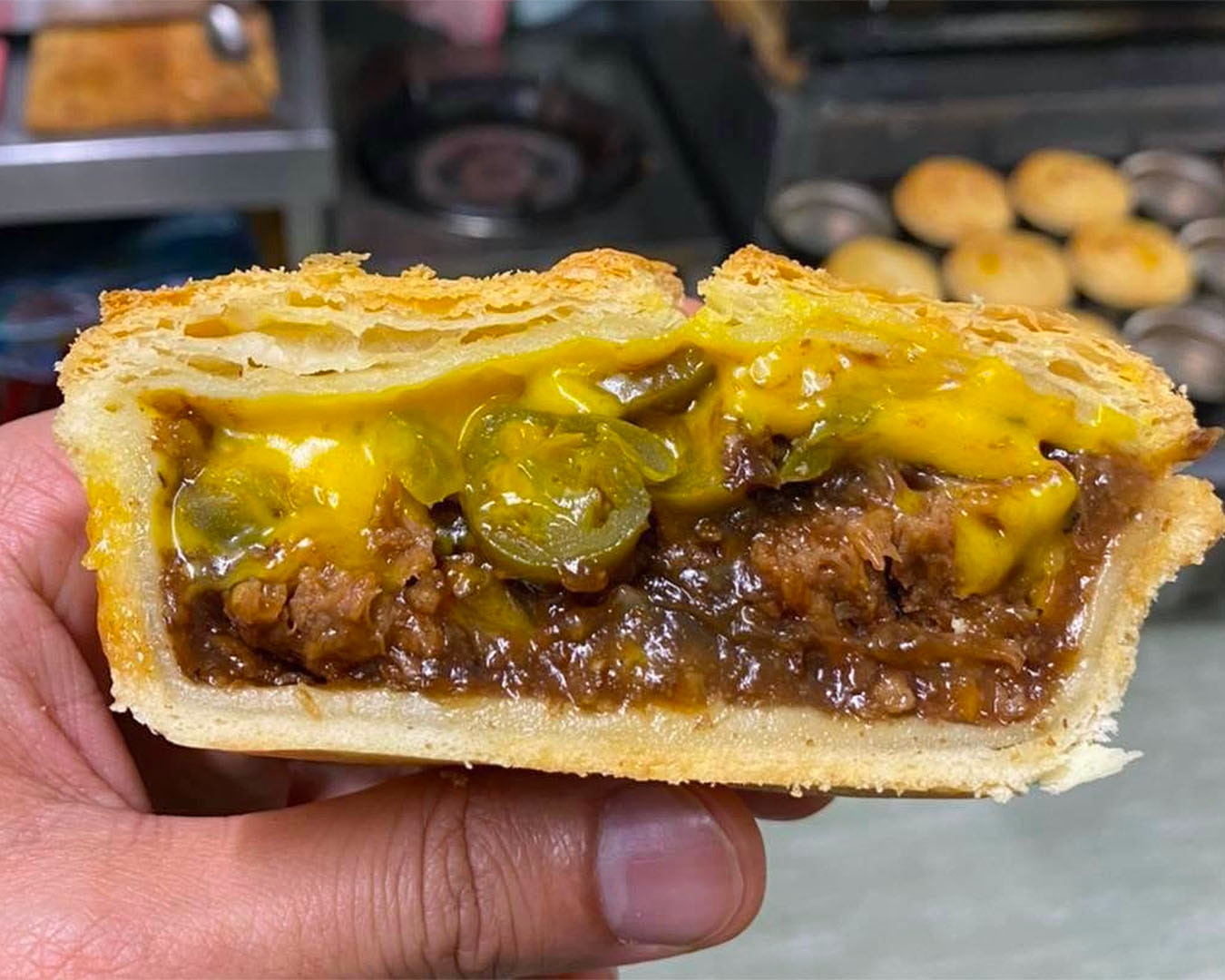 Ellerslie peeps, consider yourselves blessed—because when it comes to pies, Jason Hay of Richoux Patisserie is a legit god. He's responsible for cranking out some of Auckland's absolute best, and has the awards to prove it. Jason is especially good at coming up with novelty flavour combinations that are guaranteed to impress even the most seasoned pie fan—we're talking chicken, cranberry and camembert—cheeseburger—and even butter chicken, without the chicken (for our vegan friends, naturally). However if you prefer to keep things simple, don't worry—Jason also knows how to make a mean mince and cheese. Richoux received by far the most votes in our poll, with many of you raving about their pastry. But it's their vegan creations that have Belle hooked—she loves that they come in such unique flavours (vegan steak and cheese is her go-to). 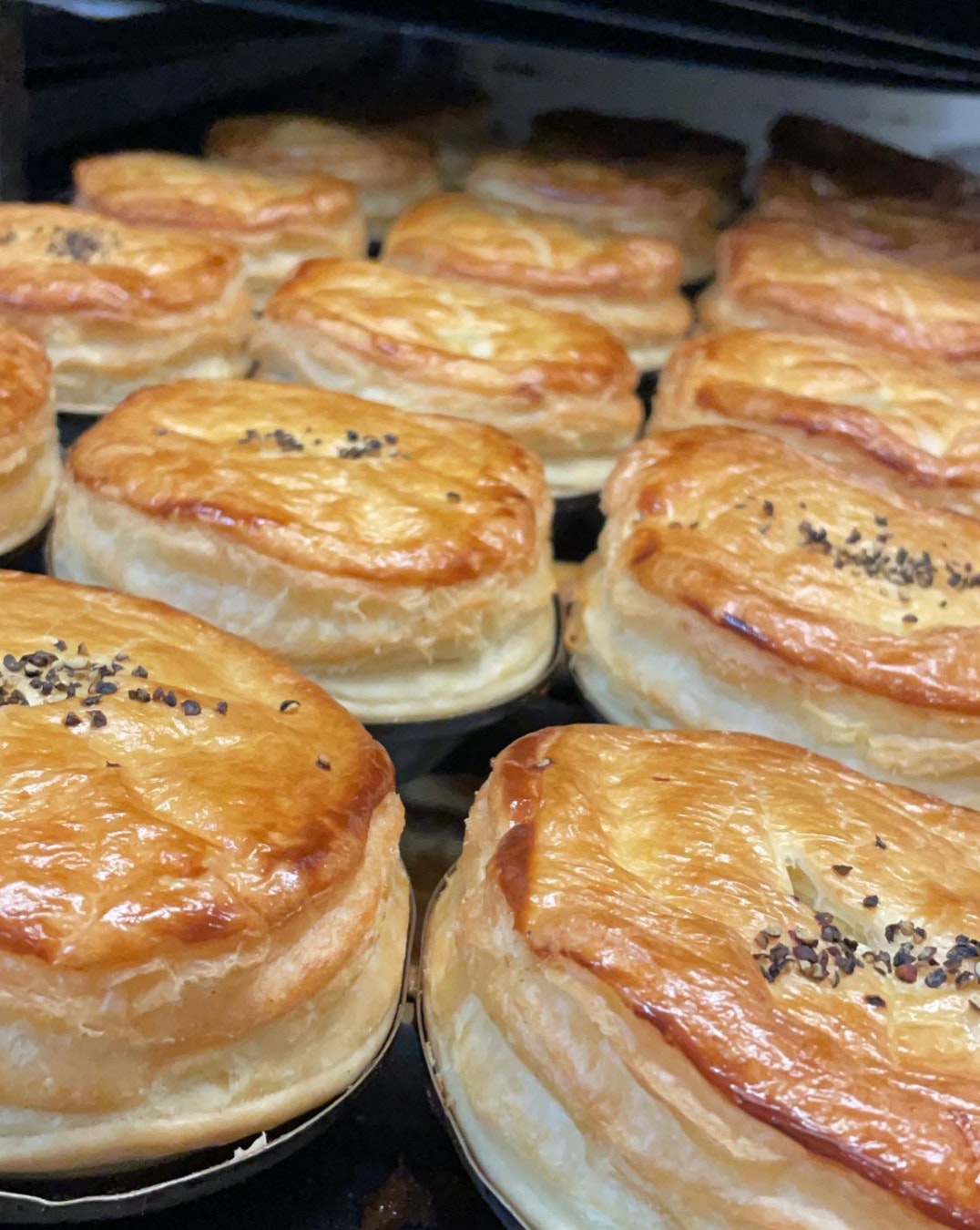 It's all eyes on the pies at this humble West Auckland bakery, which happens to produce some of the best damn pies around. That pastry lid has so much puff it should be criminal, while the fillings are as delicious as they are varied—think vegetarian, steak and pepper, potato top and smoked fish to name but a few. Julia's a huge fan of The Mill Bakehouse's steak, jalapeño and cheese number (or at least, that's what the many drooling face emojis she sent along with her comment would suggest). P.S. If you like your pies sweet, they also make a mean custard version. 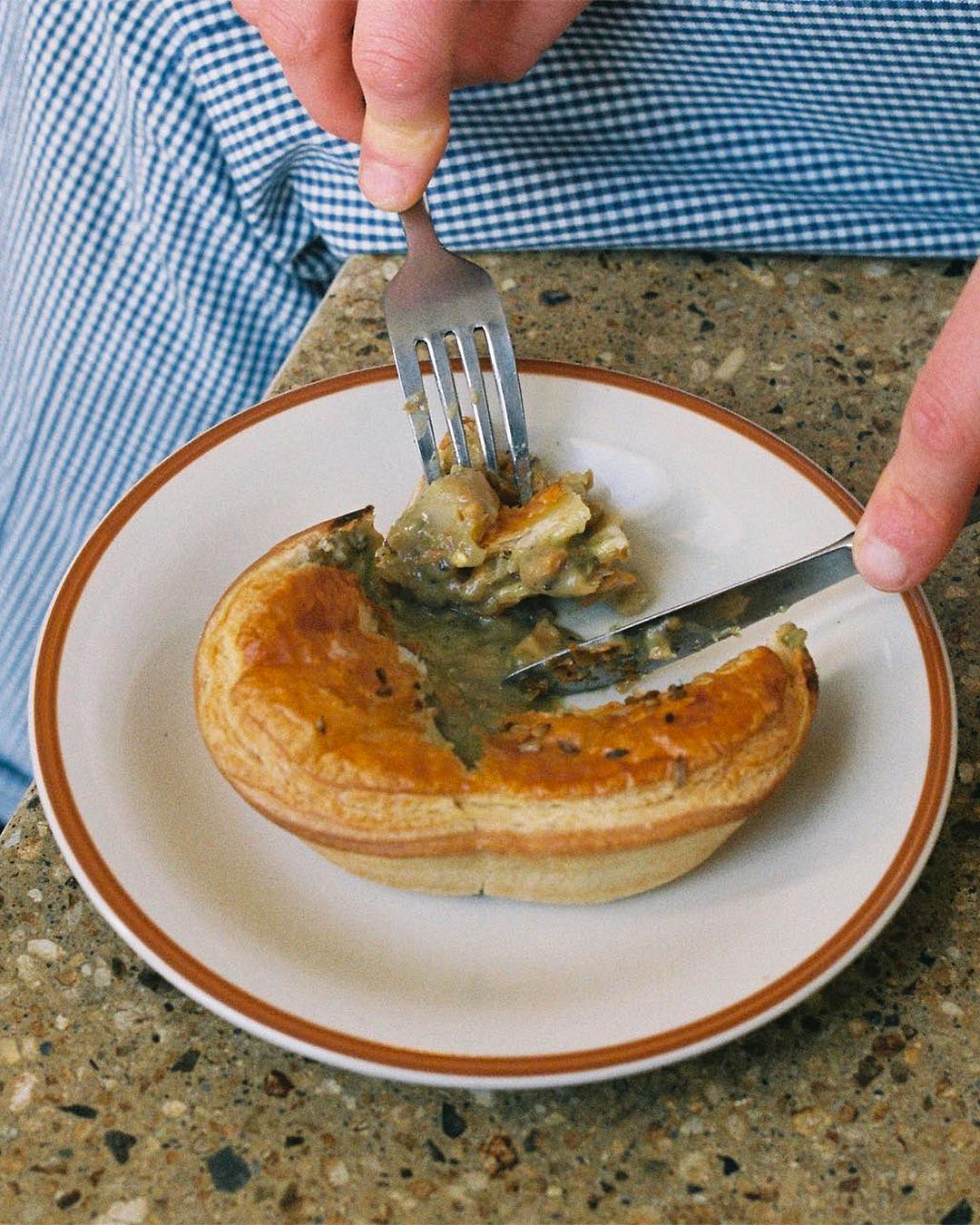 Give us Lord our daily bread... erm, we mean pie. Especially if it comes from the kitchen of this much-loved bakery, which has not one but six branches across Auckland. Run by the duo behind kingi and the award-winning Orphan's Kitchen—along with a 22nd-generation German baker (say what?)—it should come as no surprise that the pies at Daily Bread are some of the best in the biz. And with flavours like bolognese and provolone, curried kumara, and mint and mutton, you'll be wanting to make a pilgrimage to one of their stores, stat. Josh recommends getting in quick if you want one of Daily Bread's pies (which hot-foot it out the door on the reg) and says they're a legit flavour bomb.

Yeah yeah, we all know Sally sold seashells by the seashore, but did anyone mention how she worked up such an appetite, she then went and snapped up a steaming hot steak and cheese from Baked @ Devonport? At least, that's how our version of the tongue-twister would go. Any day spent at this dreamy seaside village should include at least one Baked @ Devonport pie, with hearty offerings like butter chicken, cheese frank, and what Hillary says is the best chicken and mushroom pie around. We're also keen to try out their Hunza rice pie, stuffed with mushroom risotto. 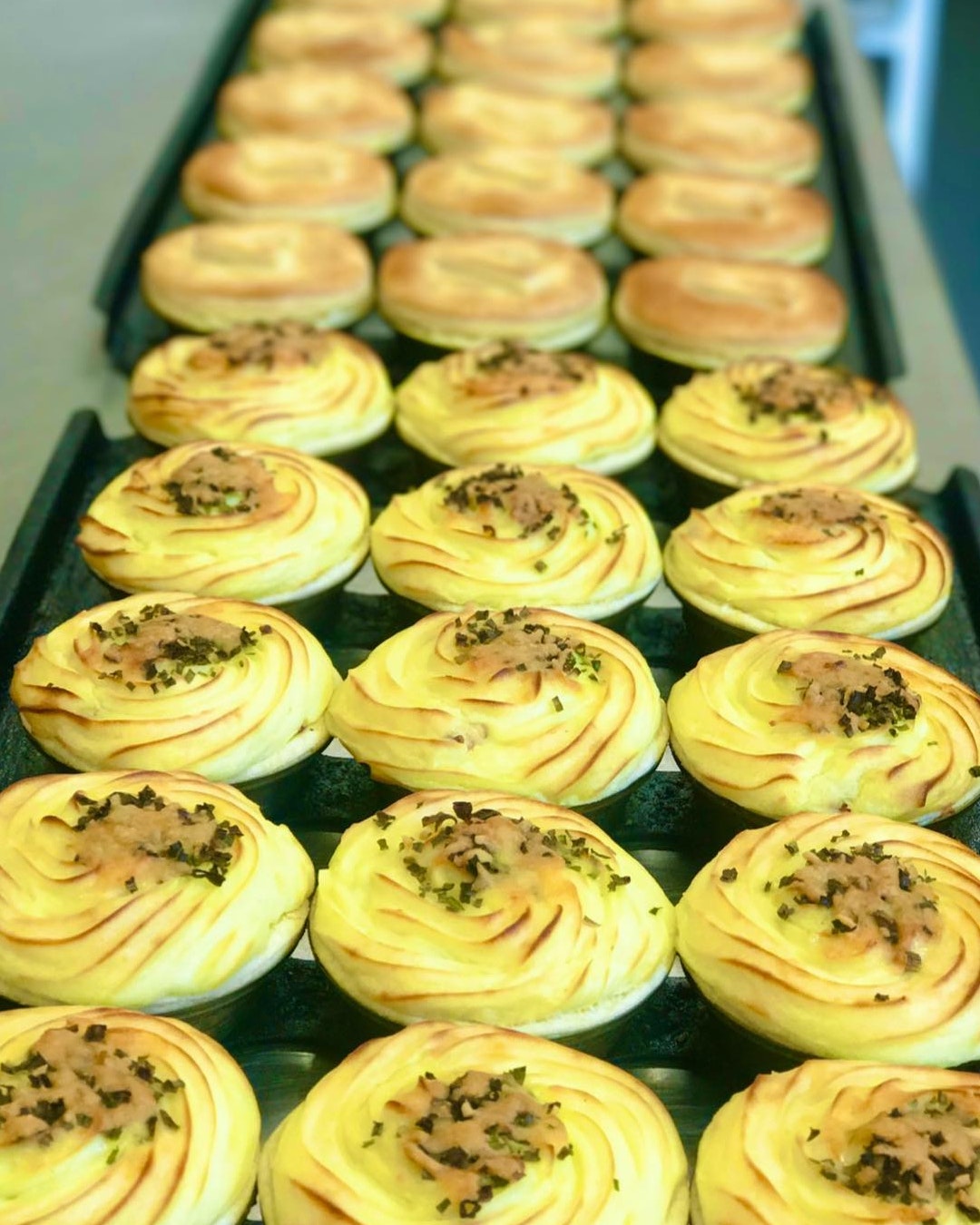 For unthinkably good pies, you can't go past The Baker's Cottage in Kingsland. This iconic spot (which, btw, has been slinging baked goods for more than a century!) has churned out countless pie creations over the years, including a rather glorious (and hugely popular) pork belly and potato top number. In the words of Todd, these pies just rock.

Finally, what kind of article would this be if we didn't mention the institution that is Muzza's? Their pies are the stuff of local legend (and the cure for many a hangover), which you can watch their talented bakers whipping up behind the counter. All the classic flavours are here, as well as a rather moreish selection of sweet ones (simply too good not to mention). Again, Muzza's was a frontrunner in our poll, with Sally telling us that their pies have loads of flavour but aren't oily—and in the pie game, that's a win.

Diehard pie fans will be well acquainted with Mairangi Bay Bakery, whose pastry creations continue to slay at the National Pie Awards every year. Yup, this bakery on the North Shore is absolutely killing it with their selection of mouthwatering pies including a brand-new confit garlic salmon number with sauteed streaky bacon, leek, cream cheese and mushroom (drool). And in more good news, Mairangi Bay Bakery also sell cold pies that you can take home and reheat at your leisure.

The Mustard Kitchen has little in common with the lunch bar that was once in its place—except for pies, that is. To say their version is a step-up from that of their predecessors, however, would be a gross understatement. These homemade goodies are some of the best in Auckland, and have been drawing locals—and out-of-towners—to the café's Morningside site for several years now. And with timeless flavours like steak and mushroom sitting alongside more modern options (a little bird told us they once did a French toast pie with bacon, banana, egg and maple)—all packaged inside a buttery, shorter-than-usual crust—we can totally see why.

As one of Auckland's top restaurants, it's only fitting that Cazador would also be responsible for some of its best pies. Look for them in their dedicated delicatessen—located right next door to the main eatery—and prepare to have your mind well and truly blown. Case in point: their suped-up version of mince and cheese, which pairs juicy wagyu beef with creamy béchamel sauce. However if you wish to partake of this deliciousness, be warned—these bad boys regularly sell out before 1:30 pm.

Scratch Bakers supply their goods to some of Auckland's top cafés, so you know that when you get a pie here, it's going to be something spesh. It's hard to go past the pork belly (the only thing better than pork belly itself), however they've also been known to sling some rather delish lamb and chorizo, butternut and feta, and cheddar, chicken, white wine and leek options. On second thoughts, we'd best take one of each.

This one's for all the vegans out there—and the non-vegans, as it turns out. The very notion of a vegan pie is a mind-blow (we take our hat off to anyone who can make pastry without real butter), but don't expect Tart to rest on this laurel alone. Their fillings are just as impressive, with flavours like mac and 'cheese', beany Mexican and creamy mushroom regularly doing the rounds. Yip, if we can say one thing here, it's this—don't let the term 'vegan' deter you, because these pies give the real deal a damn good run for their money.

Foxtrot Parlour can (and have) made pies out of just about every flavour imaginable, from Thai chicken curry to Moroccan lamb tagine and everything in between. However if you're looking for your new fave, may we suggest the beef and stilton (a rather nice introduction to eating blue cheese).

The Store is one of those eateries that can't put a foot wrong, and that's especially true of their cabinet selection—which, you guessed it, includes some pretty epic pies. Be it smoked fish, bechamel and fennel, or another wagyu beef take on mince and cheese, there's a slice of pie here with your name on it (quite possibly more).

For pies that pack a real bang for their buck, you can't beat Ripe Deli. These guys have some of the tastiest pastries in Auckland and the best bit is, you can get them on both sides of the bridge. So what's their secret, you ask? Classic flavours, done with finesse. The beef brisket and smoked fish are always a good time, but where we reckon the party is really at is with the mince and cheese (because if you couldn't already tell, we're big fans). This baby mixes things up with with not one but two types of cheese (Swiss and Gruyère), sitting atop a bed of succulent free-range mince. Get it in ya.

Fancy rounding things off with something sweet? Here's where to devour Auckland's best doughnuts.