Amp Up, Here Are The 11 New Bars And Eateries We’re Most Excited For At Commercial Bay

Here at Urban List, nothing's got us more hyped right now than the news that after four long years in the making, the billion-dollar retail and hospitality development, Commercial Bay, will finally be opening its doors on Thursday 11 June.

Situated in the spot where Westfield Downtown once stood, this epic new precinct is unlike anything New Zealand's ever seen. Filled with vibrant laneways and vast open-air spaces, it spans three storeys and will boast the largest concentration of high-end shops and food and beverage outlets in the city—including many making their Kiwi debut.

As we're forever thinking of how to next fill our stomachs, we're especially excited about having more than 35 new bars and eateries to try. Representing almost every kind of cuisine, expect to see a slew of old favourites (think Burger Burger, Bluebells Cakery, Best Ugly Bagels and more) sitting alongside never-seen-before local and international offerings. Many of these can be found inside the 650-seater Harbour Eats dining hall, an all-day venue located on the development's top floor that's inspired by the gastronomic precincts of New York, London and Barcelona.

And the good news doesn't stop there, with more mouthwatering spots in the pipeline. These include an as-yet untitled venture from Ben Bayly (of Baduzzi and The Grove fame), as well as a second home for popular New York restaurant, Saxon + Parole. Overseeing the menu here—along with several others throughout Commerical Bay—is Michelin-starred chef Brad Farmerie, who worked for several years alongside our very own Peter Gordon before going on to run Manhattan's award-winning Kiwi-style eatery, PUBLIC.

So clear your calendar and grab your credit card, there's wining and dining to be done! Here's where we'll be hitting up first. 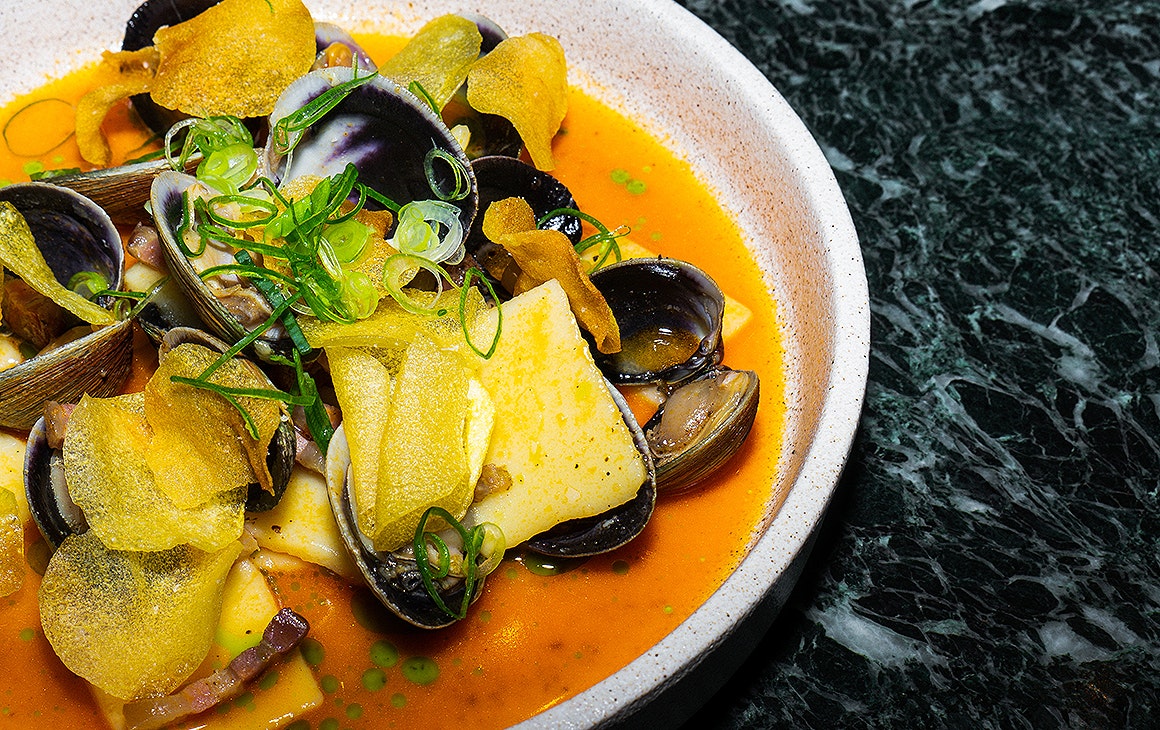 Oliver Simon and David Lee—the legends behind successful cafés Simon & Lee, Major Sprout and The Candy Shop—have done it again, this time opening their first fully-fledged restaurant. Named Gochu, this is modern Korean at its finest—we're talking melt-in-the-mouth yukhwe (that's raw beef for the uninitiated), fiery fried chicken, and the most refreshing dessert we've tasted in a while (a shaved ice concotion that reminds us of that precious childhood commodity, cereal-flavoured milk). Plus, there's plenty of booze on hand to wash down those bold Asian flavours, including cocktails and natural wines. Yes. 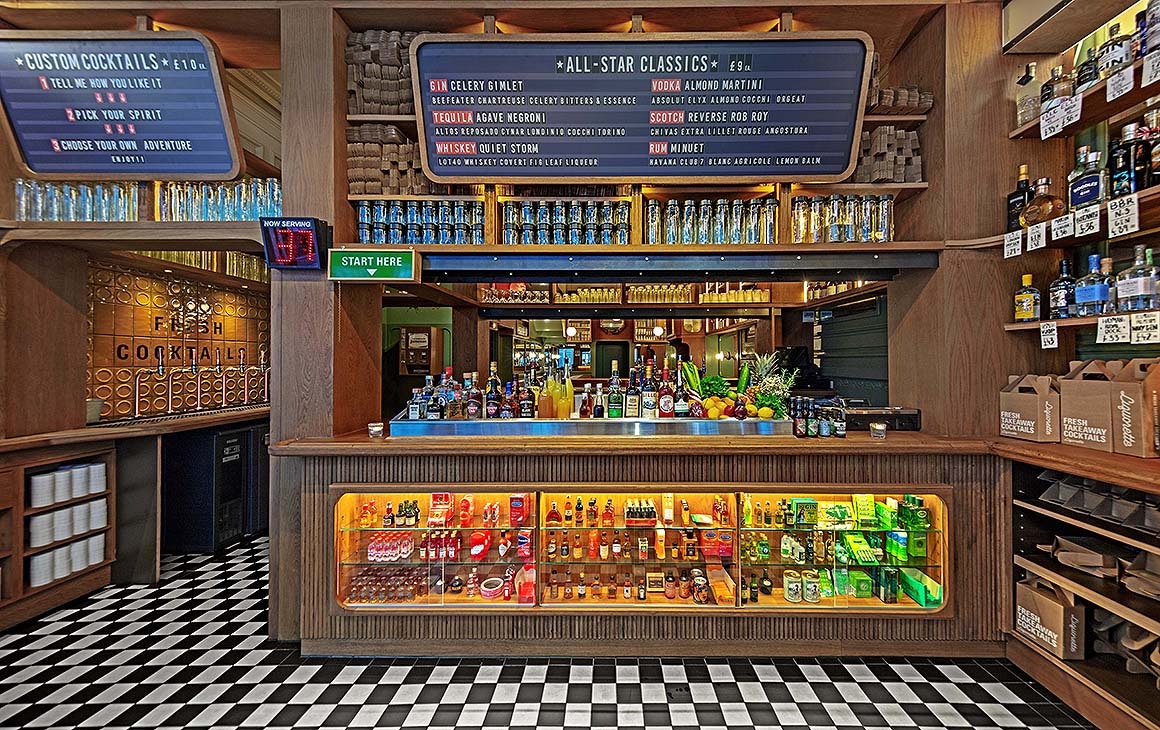 Listen up Listers, because Liquorette is about to become one of your new favourite drinking destinations. Drawing inspiration from the bodegas, superettes and liquor stores of 1970s America (where it also has a venue), this uber-cool spot specialises in 'grammable, one-of-a-kind cocktails that don't take themselves too seriously. The Cha-Chunker, for example, literally turns your drink on its head—if you order only one thing here, make it this. Should you wish to pair your cocktail with something solid, there's also a small food menu—of which the pizza (made from hand-tossed dough and baked in an open-fire oven) is definitely the standout. Oh, and did we mention that you can also get your cocktails to take away? 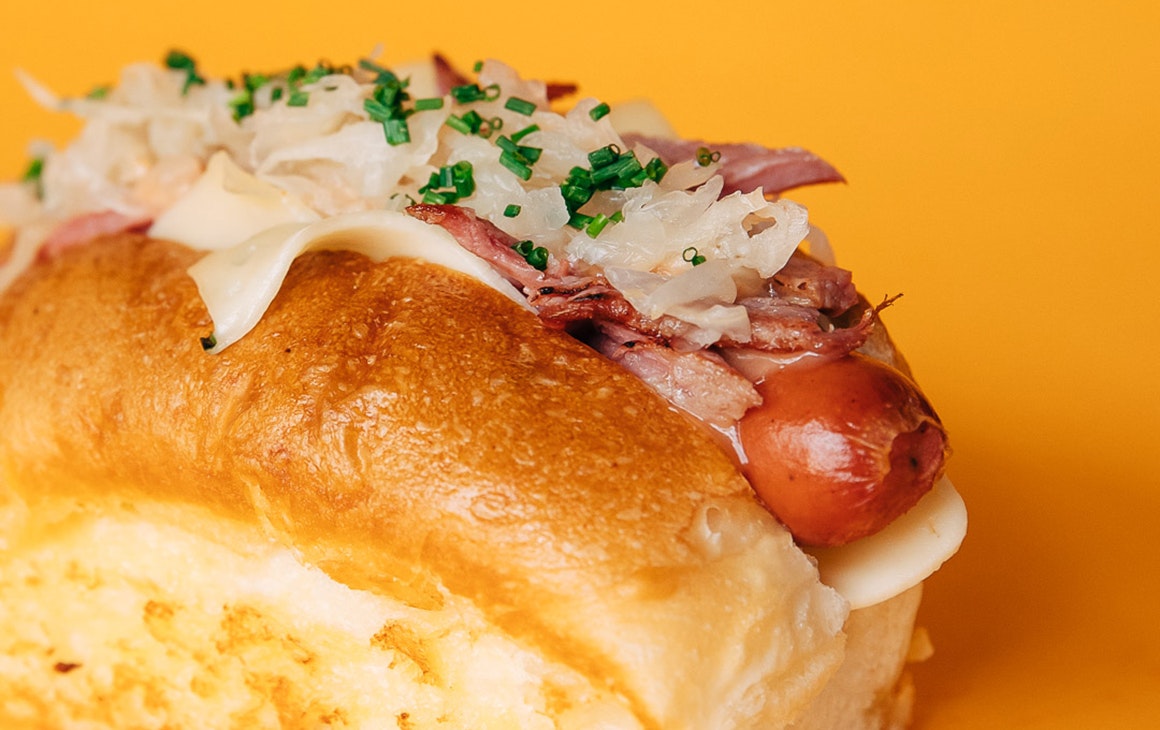 The name Good Dog Bad Dog alone makes us want to visit. Fortunately, Oliver Simon and David Lee (yes, the same Oliver Simon and David Lee mentioned above) don't just have a knack for coming up with great monikers, they also know how to make a damn good dawg. Think juicy saussies slathered in sauce and other tasty toppings, all served in a fun, American-style setting. Good, bad, whatever you want to call them, one thing's for sure—these dogs are HOT.

If you're a fan of acclaimed Japanese eateries, Azabu and Ebisu, you're going to want to check out their new sister spot, Oji Sushi. Described as a fast food outlet with slow food values, expect to see plenty of fresh, seafood-centric flavours at play (and of course, some next level sushi) thanks to the talents of renowned chef, Yukio Ozeki. 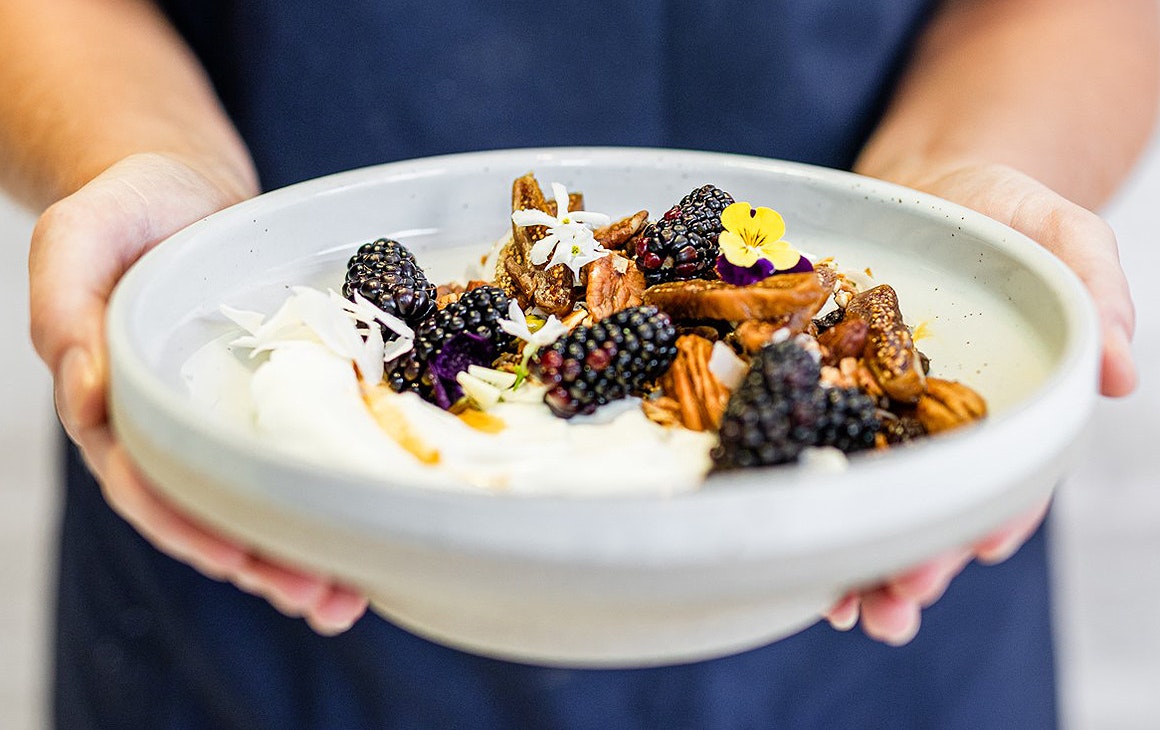 Nothing beats a spot of quality café food, especially the kind that's good for you. That's where Lieutenant comes in—they specialise in nourishing, seasonal fare that will fuel you for brekkie, lunch and beyond. Think beautifully presented dine-in dishes, small-batch coffee, and tasty cabinet treats to take away. That's three big ticks from us.

There's a lot to love about under the sea-themed restaurant, The Poni Room (another American import), starting with their serve-yourself rosé. That's right, you can pour your very own glass of the pink stuff when you visit the Rosé Room—a sort of interactive library for this much-loved wine which, in case it wasn't already clear, is the preferred drink here. But why stop at a glass? You can also enjoy this pretty bevvy by the bottle, or for a bit of extra fun, opt for one of their fish-shaped pitchers (now we're talking). You'll even be able to get your hands on a rosé slushie. However it's not all about the wine, there's also a fab Asian-inspired menu to get amongst featuring a slew of top-notch seafood dishes, and a rotating list of leading DJs to keep the good times rolling. Yup, we're calling it—The Poni Room is officially the life of the Commercial Bay party. 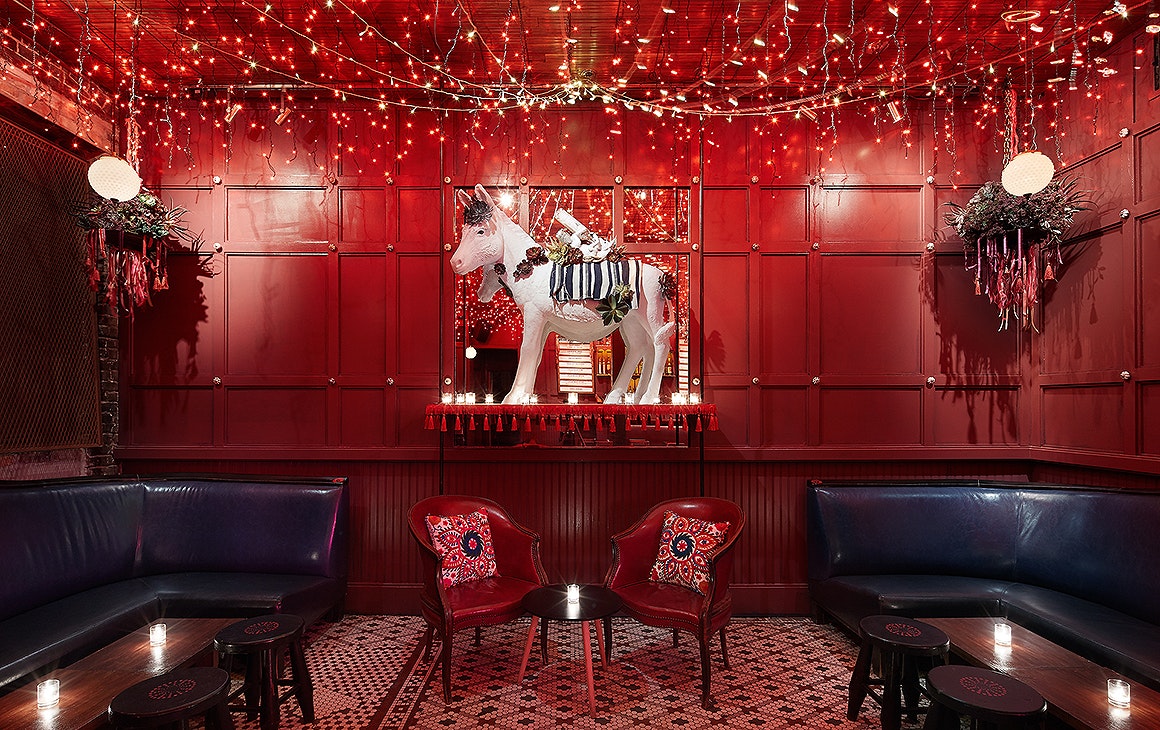 With a name like Ghost Donkey, this one was guaranteed to get our attention. Winging its way to us from the USA (where it's won a number of awards including Imbibe’s 2020 Cocktail Bar of the Year), this vibrant venue is all about the good times and good vibes, slinging more than 35 different types of mezcal and tequila with a side of Mexican hospitality. Soak up all that alcohol with a bit of South American-inspired grub—perhaps one of their unconventional nacho dishes—then head straight home (or not!) for a siesta. 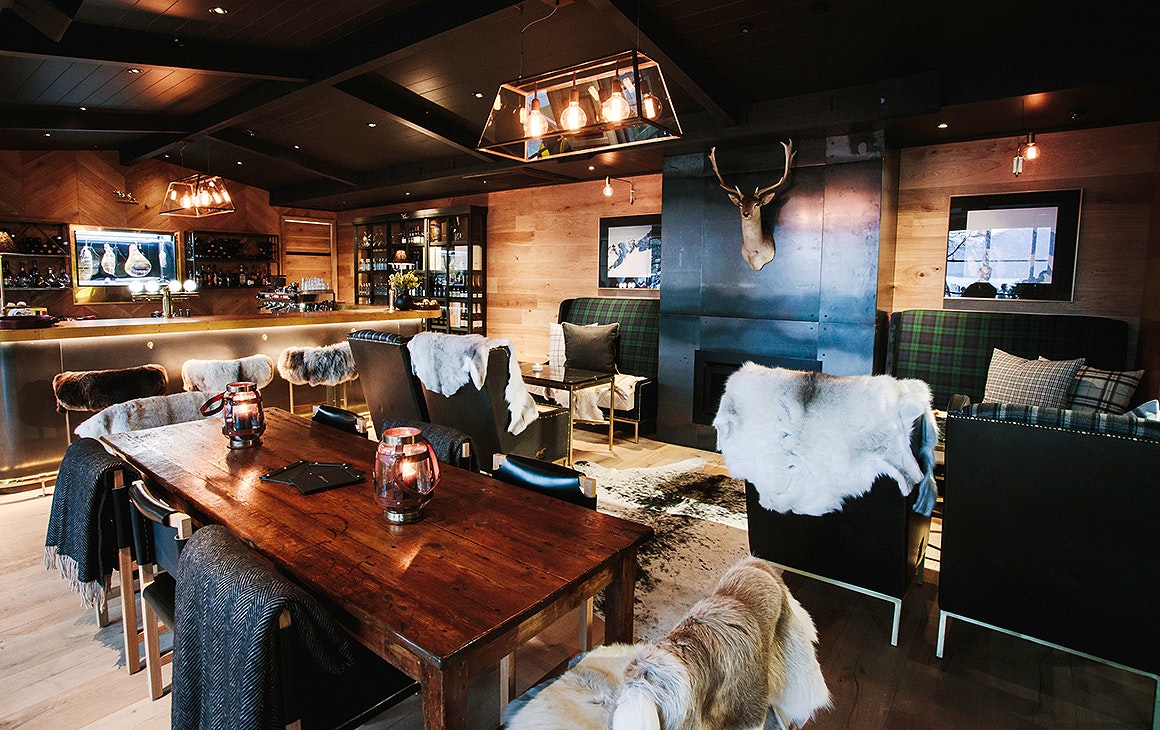 You'll feel like a proper grown-up when you dine at The Lodge Bar & Dining, part of a unique concept store from menswear label, Rodd & Gunn. Positioned in an enviable position overlooking the ocean, you certainly don't have to be a fan of the brand (or even familiar with it) to appreciate this classy establishment, where refined but hearty fare from Bracu alumni Logan Clarke meets local wine hand-picked by the country's only Master Sommelier, Cameron Douglas. The menu itself was conceived by Michelin-starred chef Matt Lambert, and stays true to Rodd & Gunn's ethos of using only the finest materials, which in this case means quality Kiwi ingredients. Game meat pies and red wine, we're coming for ya.

From Matt Nicholls (of Bedford Soda & Liquor fame) comes two hot new drinking spots, Public and Reign & Pour. There's something about the latter's name that makes us want to dive right in, kinda appropriate given that it describes itself as a seaside pouring house. Expect only the best beer, wine and spirits, served in a cosy, tavern-style setting. Public, on the other hand, offers a unique all-day menu encompassing everything from coffee and smoothies through to expertly-crafted cocktails, enjoyed amongst the hustle and bustle of Harbour Eats. Suffice to say, if these newbies are anything like their Bedford brothers, they're sure to be a hit. 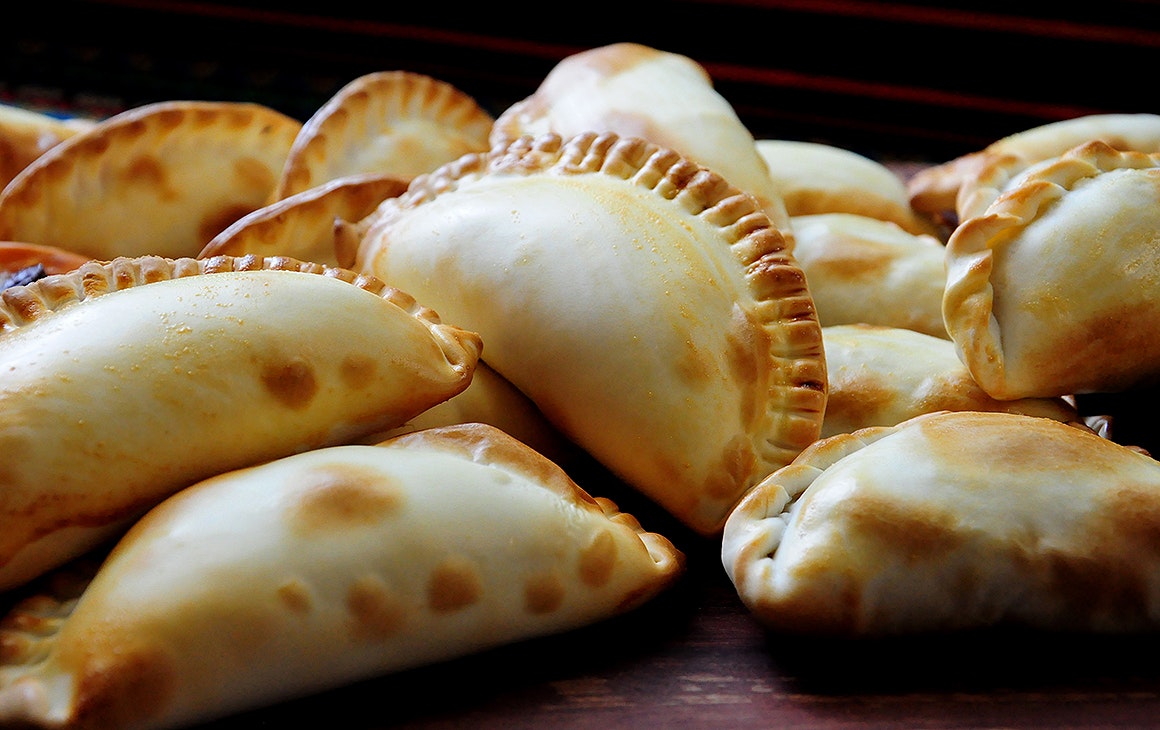 Empanadas are one of South America's most tasty exports, however they're a treat that's gone largely under the radar in Auckland—until now. Yes, South American Oven will stoke in you a love for these flavour-packed pastries you didn't know you had (unless you've come across their food truck on Waiheke). These bad boys are made entirely from scratch; stuffed with fresh, tasty ingredients like mozzarella, veggies and slow-cooked meat, then baked to golden, empanada-eating perfection. Best enjoyed with their homemade chipotle and chimichurri salsas, we dare you to stop at just one.

Soak up all that good food with a trip around Commercial Bay's Best Shops.