Here’s How To Celebrate Chinese New Year In Auckland

Not quite done with the New Years festivities? Good, because the Chinese New Year is well and truly in full swing, and Auckland is the place to celebrate.

Chinese New Year is a time of tradition, culture, vibrance and festivities, so get amongst these events to ring in the year of the rat!

Celebrate the year of the Rat as SkyCity’s three day extravaganza kicks off a raft of entertainment lasting all the way until February. Be entertained on the Friday by traditional lion and dragon dances, acrobatics, dancing pandas, calligraphy and a whole lot more. On Saturday, enjoy more cultural festivities, as well as the delectable Chinese cuisine on offer at the SkyCity Chinese Night Market. Finish off the weekend on Sunday, with even more entertainment, this time with a more contemporary twist.

What better way to celebrate the year of the rat than with rat inspired street art. For the first time, Parnell will be covered in street rats created by some of New Zealand’s most famous street artists including Otis Frizzell, Erika Pearce, and Mike Weston during the Chinese New Year period. Each day a new rat will pop up around the suburb, with clues being posted to this Facebook page as to its whereabouts. Snap a pic of the street rats and post them to social media for the chance to win daily prizes. Limited prints are available for purchase too, with the money being raised for the Starship National Air Ambulance. What better way start off the new year than with some goodwill!

The Chinese New Years in New Lynn is back for another round of summer fun. The free event invites friends and families from all cultures to spend the day at Olympic Park to celebrate the Lunar New Year. Consider it a celebration of all cultures with ethnical performances, art installations, and food stalls offering treats from all around the globe. Slap on the sunblock and grab a picnic blanket to take in everything the Whau festival has to offer. 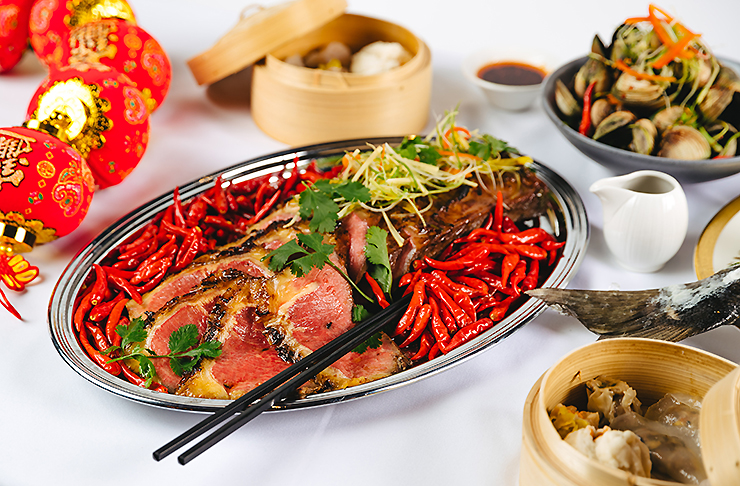 Feast up a storm with Eight Restaurant’s celebration of mouth-watering Chinese dishes. For a whole month, they’re treating us to showcase of all the classics, like XO marinated chicken, sesame and soy bok choy, and whole steamed fish for dinner, all cooked to absolute perfection. Other parts of Asia are on the menu too, with fresh sushi, seafood, and authentic Indian curries on offer at the eight interactive kitchens. What’s more, kids dine half price for the whole month, making this the perfect place to enjoy some culture with the whole family.

It wouldn’t be a Chinese New Year in Auckland without the annual Lantern Festival. For four days the festival ignites hundreds of homemade lanterns throughout the Auckland Domain in celebration of the new year. 2020’s festival will be no different from the usual spectacular set up—authentic Asian food stalls, live roaming performances, amazing art installations, and tremendous fireworks show to end the festival with a bang. Everyone is invited to the city’s largest new year’s celebration.

New Zealand has a diversity of cultures and Auckland Museum thinks that is something pretty special. Level one of the iconic building remains a permanent home to the Arts of Asia exhibition. The gallery features more than 7,000 objects originating from the mass continent. The entirety of the art captures the material creativity and beautifully intricate designs of different cultures spanned across Asia. So why not get clued up about the Chinese culture to ring in the New Year?