Humans are responsible for 300 million tonnes of plastic each year, with over eight million tonnes entering our oceans. Long-distance swimmer Ben Lecomte has teamed up with icebreaker to tackle ‘The Vortex Swim’, a 300-mile swim between Hawaii and California to raise awareness about the marine pollution we’ve created.

Ben's swimming across what’s called ‘The Great Pacific Ocean Patch’, or ‘The Plastic Vortex’, where there is one of the highest concentrations of ocean plastics in the world. The Vortex crew uses a custom net to collect an average of one plastic particle every other second—a shocking 1000% increase compared to other samples collected—and finds more than one item every three minutes across the Pacific Ocean.

We caught up with Ben to talk about the life of a long-distance swimmer, some of the shocking stuff he’s found during his Vortex Swim, and how we can act more sustainably for our environment and our future generations.

What is your overall mission in completing The Vortex Swim?

Our goal is to raise awareness about marine plastic pollution, collect scientific data and samples of big plastic debris, microplastic and microfiber, and to inspire people to move to natural by using alternatives to plastic in their daily lives.

What is the most challenging part of a long-distance swim?

The mental side is the most challenging aspect, it requires a lot of mental preparation, a mental road map and rigorous mental schedule to adhere to.

And what’s your favourite part?

I have many favourite parts, one of them is the opportunity to get very close to sea life in their own environment and sometimes interact with them.

You must see some pretty incredible sights of marine life during your swim. Have there been any particular highlights?

I had an amazing encounter with three sperm whales. One of them was a calf and they swam past me just a few metres away, I could see the biggest one looking straight at me as it slowly turned on its back. The same day we found our biggest concentration of microplastic to date with over 3000 fragments in a 30 min trawling. It's heartbreaking to see these creatures swimming in an area contaminated by plastic. 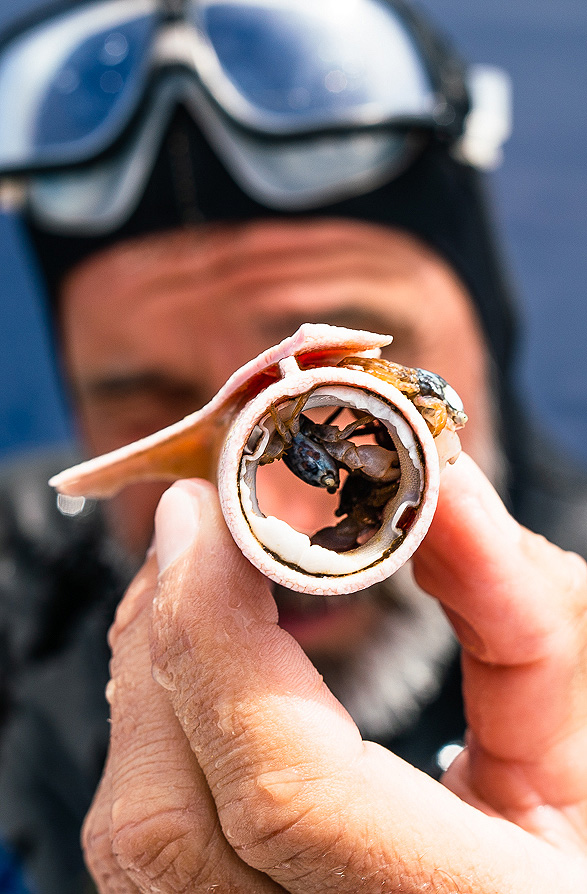 What do you do when you come across a shark, jellyfish or any other potentially dangerous animals?

I have been stung by jellyfish very often but since I have a full wetsuit, it is only on my hands, ankles or face. There is not much I can do, I try to avoid them when I or the driver of the dinghy spot one. So far during this expedition, I have only seen one shark. It came under a ghost net I was inspecting and ate a dead fish that sunk below me as it got dislodged when I moved the net around. The shark stayed below me about 10 metres away for just a few seconds and then disappeared. It reappeared a few minutes later but again just for a few seconds.

What does your diet consist of when you’re swimming?

When I swim, I stop every hour to eat some soup and bread. In the evening I have my lunch and dinner (pasta, rice, canned vegetables, meat and fish in a can too), in the middle of the night I eat another dinner and in the morning a big bowl of porridge with nuts. I stay away from sugar, so I don't eat any dessert or food loaded with sugar.

You’re now about halfway through your swim across Hawaii and California. What are you most excited for once you’ve finished the swim?

To be back with my family and spend time with my wife and children. It is the second year in a row that I have been away during the summer, six months last year and three months this year, and that has been very difficult for everybody.

After a big rest, what’s next for you in your mission to raise awareness about the state of our oceans?

We have been collecting a lot of footage and documenting this expedition so the next step will be to produce a documentary. I also have plans to stop in different cities to talk about the expedition, what we have experienced and collected.

You first swam the Atlantic Ocean in 1998. Have you seen any changes to our ocean environment between then and now?

I haven't swum in the same location in the Atlantic, so I cannot compare what I saw then to what I see now. But I have never seen in the middle of the ocean that much plastic debris and that high concentration of microplastic before.

What inspired you to swim this journey across The Great Pacific Garbage Patch?

For more than 10 years raising awareness about marine plastic pollution has been a focus of mine, and since I use swimming as a mode of communication, it was only a matter of time that I would swim through the patch. There is a big myth about what the patch is, it is not a big floating island but a huge area of high microplastic concentration and swimming through some of the most contaminated areas was important for me to show from a unique perspective what it really is.

The Great Pacific Garbage Patch spans between the West Coast of America and Japan and has the highest concentration of marine pollution in the world. Why does this area in particular end up so polluted?

I am not a scientist but from what I have learned, there are converging currents, the bigger one being the Kuroshio, a warm current flowing from Asia and passing east of Japan, that brings plastic debris to the core of the patch which is located between Hawaii and California. The wind is also weaker in this area, which causes the debris to move less and accumulate in this specific spot. 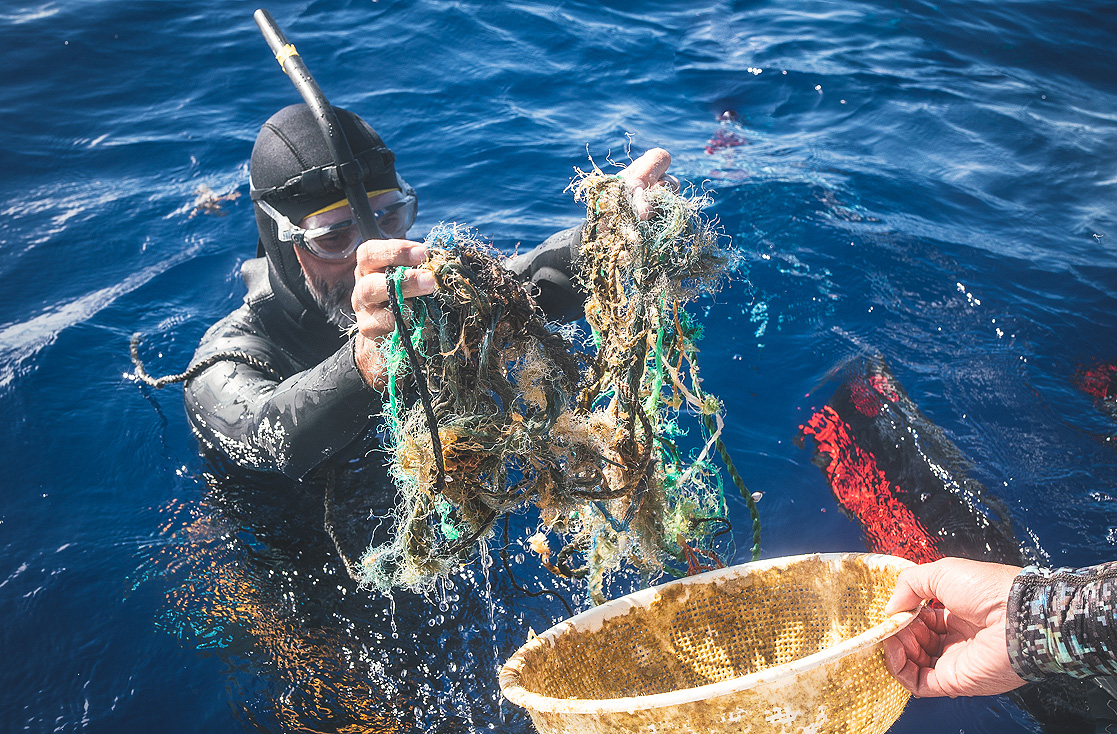 What kind of plastics and pollution have you come across in your swim?

When it comes to microplastic and fragments it is hard to tell the source but we have seen a lot of plastic household products (bottles, plastic bags, food containers...) and fishing gear (net, ropes, crates...).

Does your crew do anything with the plastic collected?

We collect organic samples from big plastic debris, we keep all the microplastic we collect during our net tows and we keep a few unique plastic household items.

What have you found that has shocked you the most?

The amount of plastic and microplastic we found. Single-use plastic is thought of as the biggest contributor to plastic pollution in our seas, now it's found that over 35% of the projected 1.5 million metric tonnes of microplastics found in the ocean come from synthetic textiles that often go unnoticed by the naked eye.

What kind of materials in our clothing should we look for when it comes to being more sustainable and reducing our impact?

We filter water to collect microfiber but we don't have the equipment to analyse it, it will have to wait until we get to land for it. We already received results from our previous expedition from Japan to Hawaii, every single one of our water samples contains traces of microfiber. I am proud to wear icebreaker clothing and move from synthetic to natural fibre, this is one of the changes I have made to reduce my impact.

How do you think brands like Icebreaker are impacting the way we choose clothing and innovation in design?

icebreaker is an innovator in its field and provides an alternative to synthetic fibre. I hope that through this expedition we not only show the problem but also provide some solution on how we can mitigate it. icebreaker being the perfect example of it, it is all about moving to natural and away from single-use plastic.

What are some of the impacts these microplastics have on our wildlife and on humans?

Microplastic is like a sponge with chemical components, they stick to it. When an animal eats a piece of plastic, it also ingests chemicals to that stay in its meat and gets concentrated as it moves up the food chain. We are at the top of the chain. We know very little about the consequences, but plastic is proven to carry endocrine-disrupting compounds which are known to hack hormones and play a central role in very common diseases like obesity, hormone-related cancers, diabetes, ADHD, heart diseases, etc. The best we can do is keep learning more about the issue, and bear in mind that what marine life eat, we eat.

Finally, what can we do in our everyday lives to have a more positive impact on our marine life?

Move to natural and away from single-use plastic!

You can follow Ben’s journey across the Pacific Ocean on a daily blog and live tracker and see the work and amazing wildlife on his Instagram here.