If there’s one dessert we could sin with every day, let it be the syrupy, flaky goodness that is baklava. Layered with crushed nuts, crispy filo pastry, and lathered in all the sweetness, the true history of this saccharine beauty is a hard one to pin down due to the fact a lot of countries call this green and gold treat their very own.

While it dates back to pre-Ottoman times, this dessert has origin stories in Iran, Turkey, Persia, Levant, Greece— the list goes on. Wherever it first made its world debut though, this glossy melt-in-your-mouth sugared-up sweet comes in all shapes and sizes and in all kinds of filling variations, which really just means for you, you’ll have to order these by the batch and slowly but surely work your way through all the baklava combos. 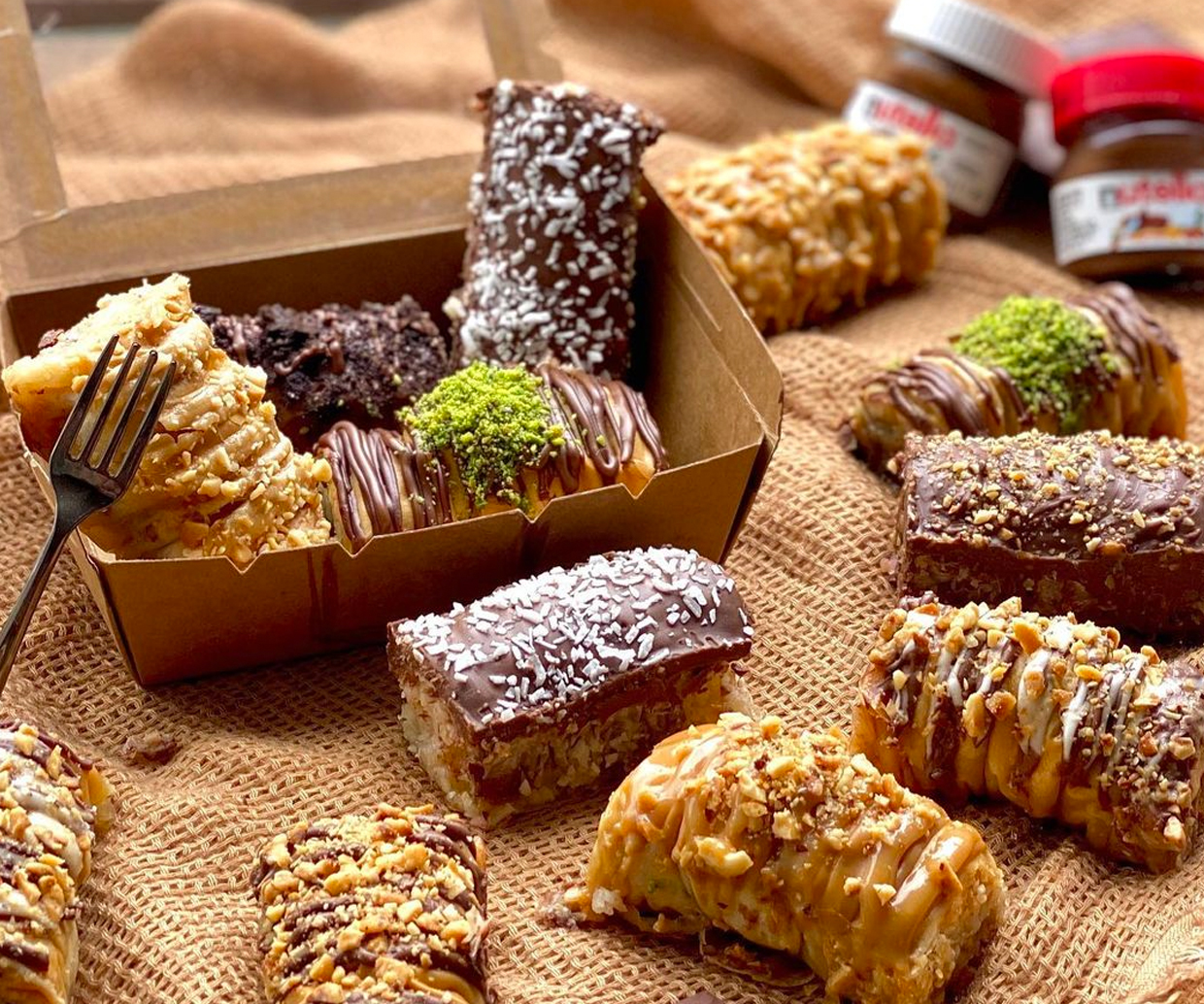 We’re not quite over the baklava creations at Gaziantep Sweets (do we dream about them every night, pretty much). This gem is basically a baklava goldmine and it clocks in as one of the best places in Sydney to order Baklava straight to your door. The traditional baklava suite here looks like one to two-kilogram batches of walnut, ladyfinger baklava, pistachio, sobyet, midye and the big bulbul baklava.

Adding to this, you’ll also be privy to handmade havuç and pistachio rolls, plus a solid line up of chocolate baklavas which look like Nutella-choc, macadamia chocolate, oreo chocolate and coconut, and chocolate. Take it from us, you’ll want to work through every damn flavour (even if it takes you an entire year).

Honestly, there are some damn good pastries floating around at Ibrahim Pastry. With everything from Lotus Biscoff znoud el sit (a combo of phyllo dough, rose water, orange blossom water, and heavy cream) to khalili (made from semolina, ashta, and a thick layer of pistachio), it should come as no surprise that the baklava treats here are god-tier. This family-run business goes hard on the baklava creations too with walnut, almond, cashew, and pistachio flavours up for offer every day.

Simply put, you need to try the knafeh bi kaak here. It’s just like a burger, only much sweeter, crumbier, cheesier, and then drenched with even more sweetness. However, when you’re on the hunt for a stellar batch of layered filo goodness, the beauties at Abla’s Pastries hit a bit different. Here, it’s all about ordering baklava by the tray (you won’t get away with trying to nab a single morsel) and the good news is you can also opt in for a baklava delivery as well. There are trays of baklava with as little as the three staples all the way to hoards of the stuff packed with the likes of walnut baklava, asawer, balourieh, and bukaj. 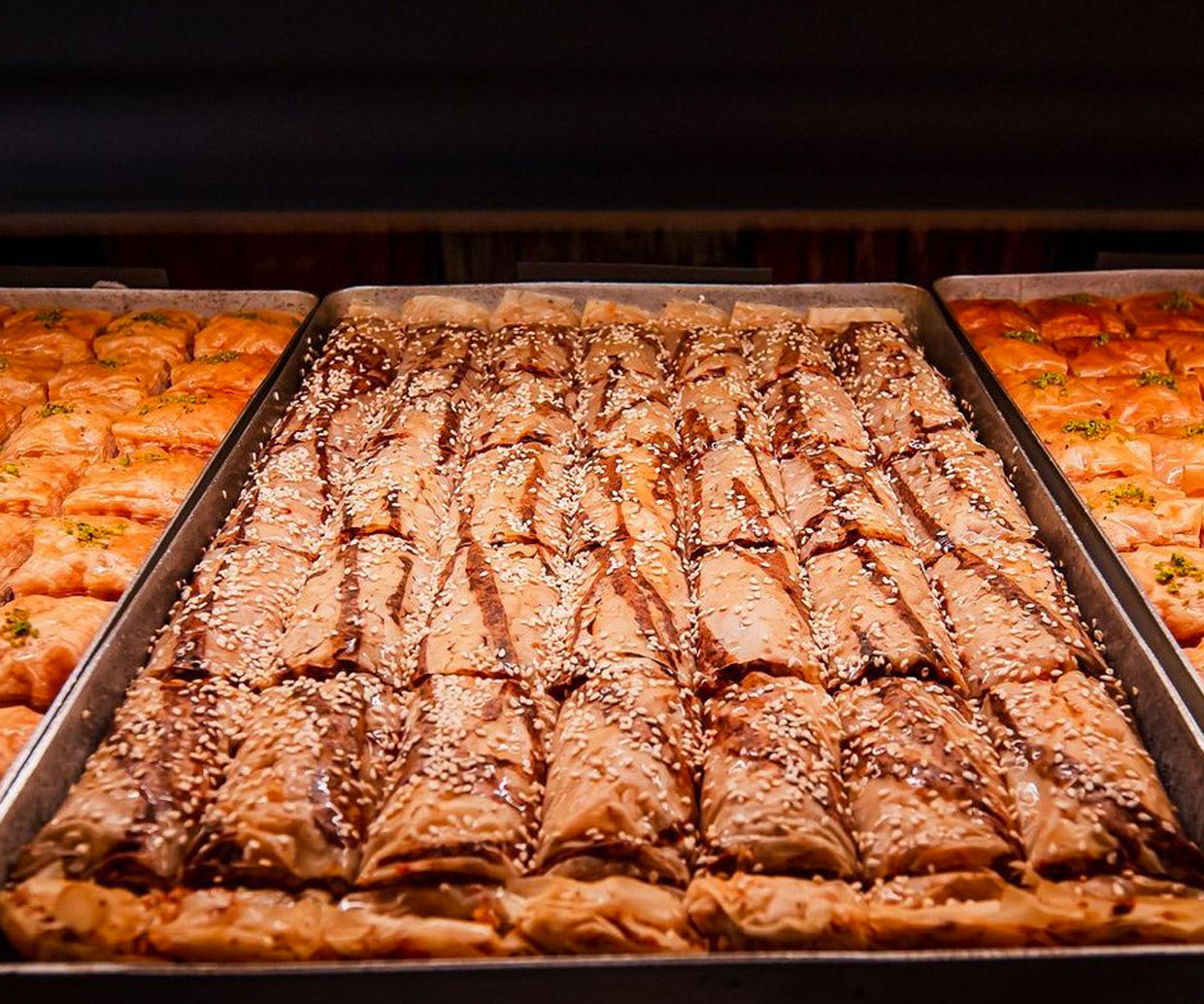 People travel far and wide to scoop up the Turkish ice cream, coffee, and baklava on offer at Hakiki—and you should too. It’d be rude not to treat yourself to the famed Turkish ice cream here, made with salep, which is what gives the ice cream its incredibly creamy, smooth flavour. Alongside this, the baklava (and Turkish Delight, for that matter) is absolutely where it’s at. There are eight different flavours of baklava spanning pistachio, walnut, sour cherry, apple and cinnamon, rhubarb, walnut choclava, pistachio sarma and kunefe.

Known as “Little Athens”, Hellenic Patisserie & Gelato Bar is as much of a favourite in the Greek Community as it is a widespread foodie rite-of-passage in Sydney. You’ll find this one on bustling Illawarra Road and the establishment can be traced back to 1977 by the Scoullis family. Hellenic Patisserie's baked goods are made as traditionally as you could ever get them without actually going to Greece. While you should definitely not limit yourself to just ordering the baklava here, when you do have a hankering for the good stuff, it’s worth knowing you can order these as individual pieces or full-blown trays of the syrupy stuff. Should you pair this with the on-site gelato? Obviously. And great news, you can also order online.

The shining stars of Turkish cuisine in Sydney—Efendy in Balmain, and its sister restaurant Anason at Barangaroo, are pretty serious about baklava. So serious, head chef and owner Somer Sivrioglu literally air freights trays of baklava from Gaziantep in Turkey weekly. Gaziantep is the centre of pistachio cultivation in Turkey and, according to Sivrioglu, home to the world’s best baklava houses too. So, needless to say, you need to try it. 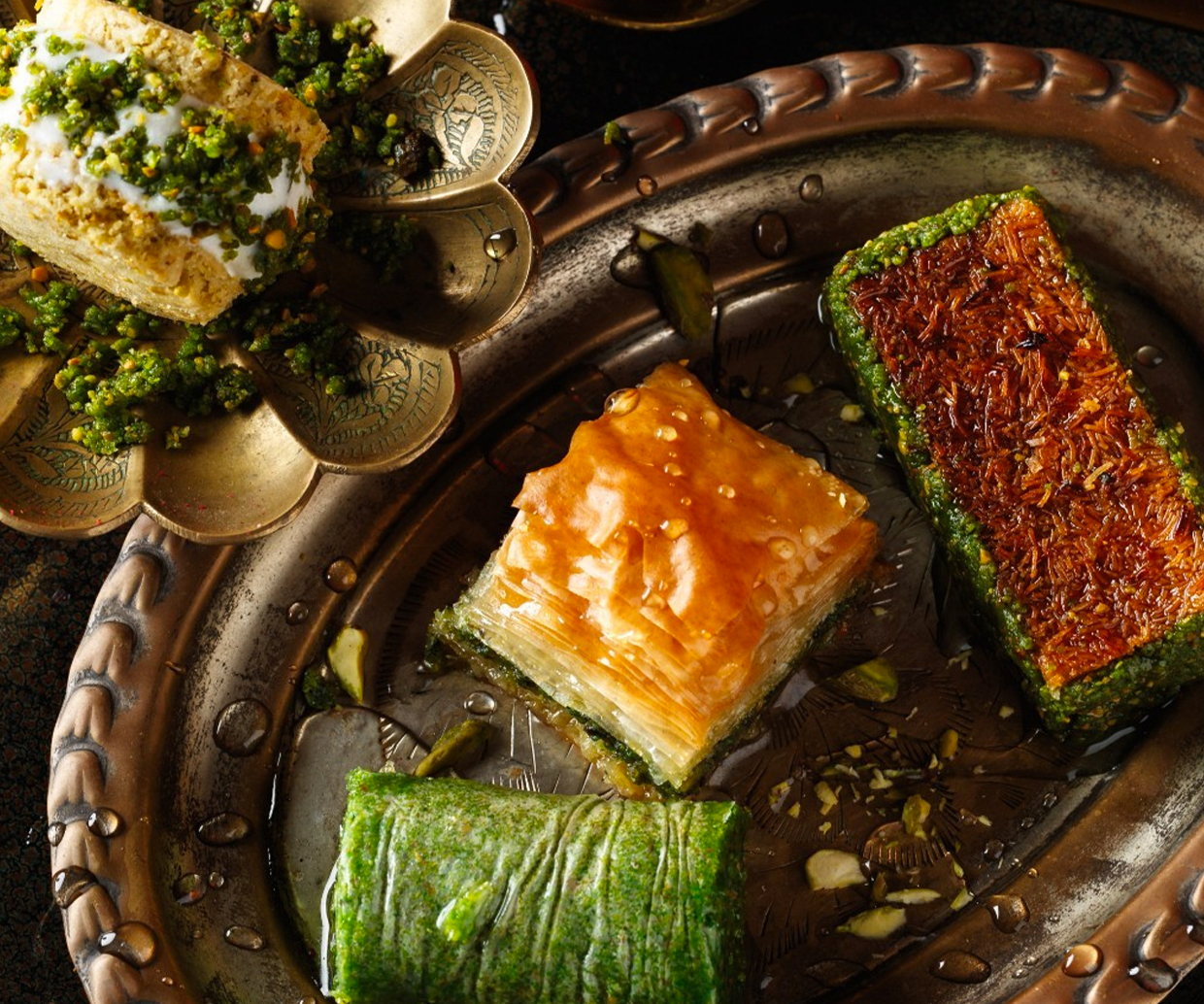 While you may be scouring the high and lows for the best baklava in Sydney’s CBD, look no further than Babylon Rooftop. Located on level seven of Westfield Pitt Street Mall and with the most amazing fit-out, everything from bread to baklava is made in house, cooked over wood and charcoal on a custom-built three-metre-long Mangal grill. When it comes to the baklava, there’s a mixed plate dedicated to the layered filo treat and this guy is the only way to finish off a banquet here.

Headed by Naim and Nermin Gunduz, this Turkish bakery is known for nothing other than its baking excellence—one that has filtered through the family ties and sees their children and grandchildren holding out the fort today. The good news is that this haven opens as early as 6am and keeps its doors wide open until 7pm every day of the week which means you’ll have a non-stop supply of freshly made baklava creations whenever you need. As the only time we’ll ever use the “m-word”, the baklava goods here are famous for their moistness in a way that can’t be compared to any other baklava in Sydney.

Samir Abla Pastry is your one-way ticket to a culinary safari of Lebanon without actually buying a ticket. Hot off the menu every day is the fresh knafeh and flakey znoud el sit, not to mention the ever iconic peanut butter and Nutella lady arms. People have travelled interstate to score the baklava treats here which also come in a vegan type of way too which can all be ordered in a big batch straight to your front door.

Ricotta cheesecakes, custard tarts, chocolate kourabiethes and the mouthwatering custard-creamGreek treat known as Kataifi—there’s not much you can’t get at Eleni’s. Greek Cakes By Eleni is the Eastern Suburb’s answer to getting its baklava fix without having to veer onto a highway. Every day calls for a fresh tray of the sticky and nutty good stuff and the crew here have been making them the same way for decades.