Netflix and chill is great and all, but a night at the movies has a place in our hearts. It's how the filmmakers want us to see their movies. There's just something special about getting the full visual and audio experience, without the distractions of home, that you can really only get in a cinema. And, of course, movie theatre snacks are essential (we recommend always adding Maltesers to your popcorn order).

We're fortunate to live in a city with such diverse movie theatres, from old and full of character to brand new with reclined seating and in-cinema dining, and from little and charming to grandiose and sensorily overwhelming.

Because they love their patrons, we also highly recommend looking into movie club memberships to a lot of these cinemas. You make the small upfront cost back extremely fast because of discounts and reward tickets.

So, please sit down, turn off your phone, and enjoy our list of Sydney's best cinemas.

Ritz Cinemas really look the part, as an Art Deco heritage-listed Randwick institution. Surrounded by restaurants and cafes, it's the perfect place if you're looking for a date spot out East. The Ritz caters to the deepest of cinephiles, with rotating retrospectives and filmographies on some of cinema's most celebrated creators, like Alfred Hitchcock and Frederico Fellini, as well as a constant slate of cult classics. So popular is the Ritz that it continued selling its popcorn and choc-tops for home moviegoers in the local area when it was shut due to COVID-19. 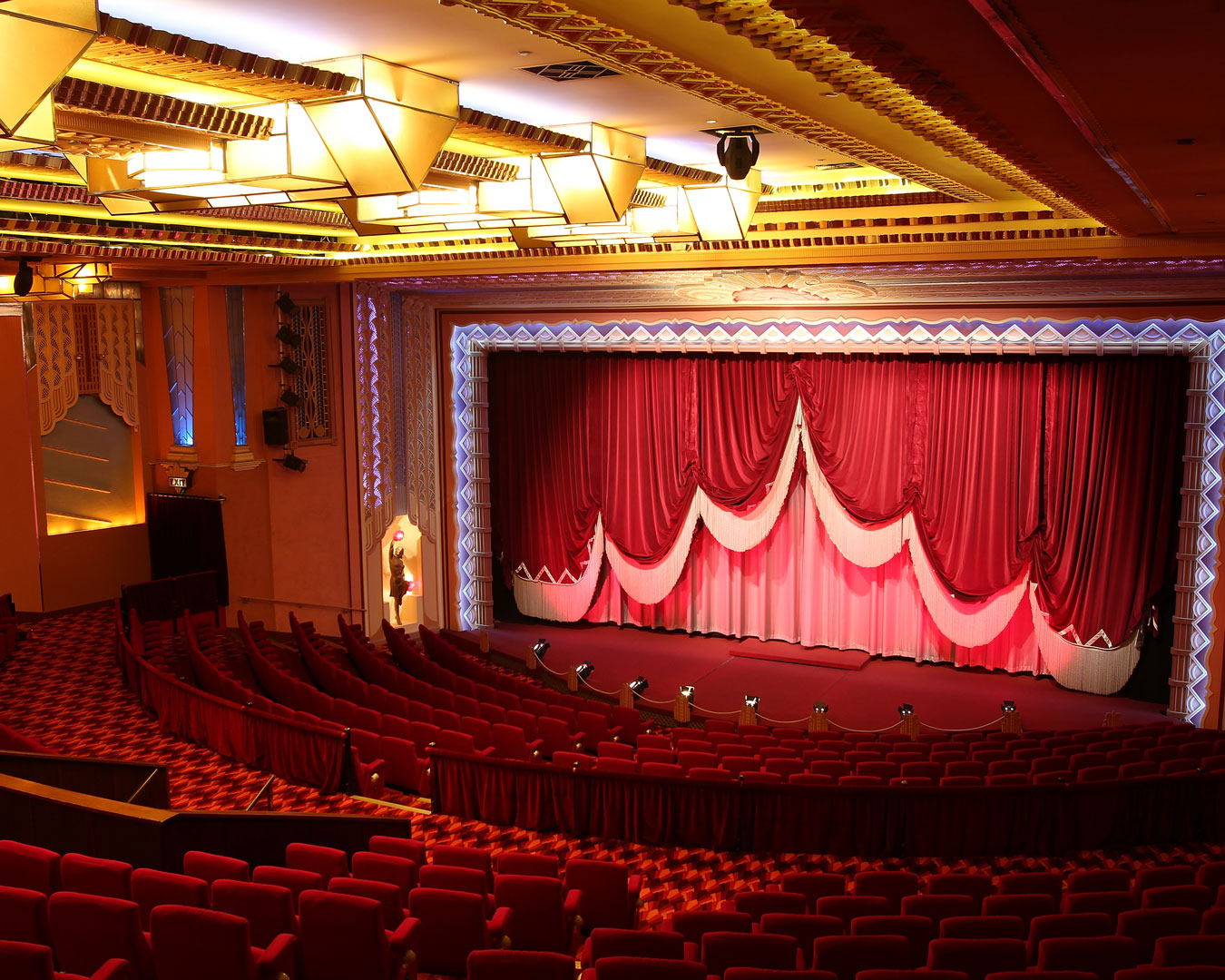 If you're driving up Military Rd, you can't miss the giant neon-lettered sign which reads "Hayden Orpheum Picture Palace" and the old school lettered board of what's currently showing. Step inside the heritage-listed, art-deco cinema to be transported back to the 1940s, with carpets, formal employee uniforms, funky lights and deep red velvet movie seats to match. Much like the Ritz Cinemas, the Orpheum looks after all movie fans, from its new releases to its retro classics, and from its screenings of National Theatre performances to its interactive and raucous monthly showing of the infamous cult film, The Room. 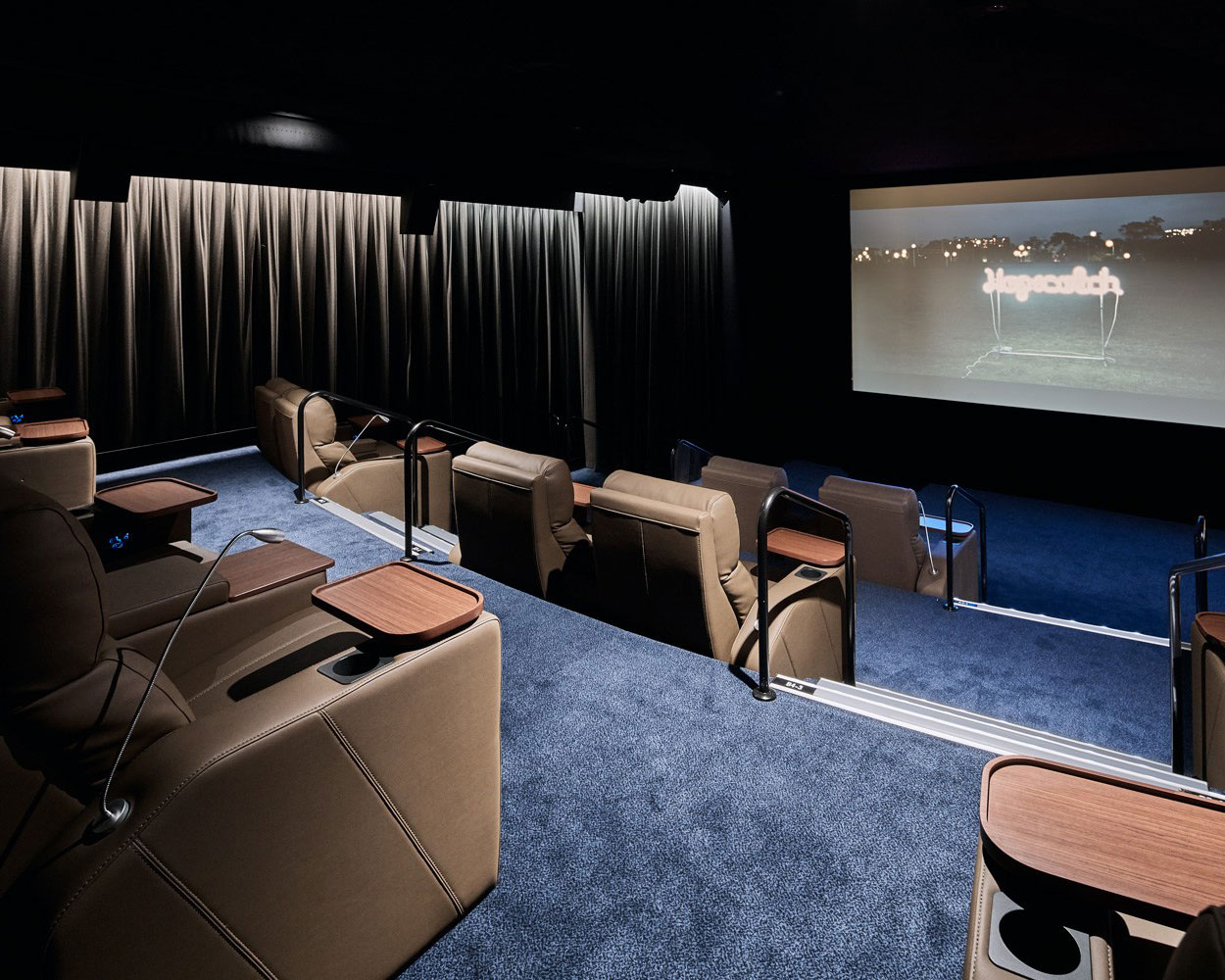 Palace Central is the newest cinema on this list, located a few floors up at the spectacularly green Central Park Mall. This is our top recommendation for a relaxing date night when you feel like the full "treat-yo-self" movie experience—with a polished fit-out created by Design Office, it's a super slick movie experience with fancy drinks and eats included. Get yourself a ticket to a film showing in one of their three Palace Platinum theatres, and you'll be reclining, putting your feet up, and ordering a cheese board and a glass of wine at the press of a button. Keep a lookout for Platinum sessions, because they offer cheaper seats early in the week.

Nestled in the heart of Leichhardt's bustling Norton St, the Leichhardt Palace is a local favourite of the Inner West. After being restored and expanded a few years ago, it still carries the old Palace charm, while feeling extremely modern (and the seats are definitely comfier than they used to be). Where else would you go to see the yearly Italian Film Festival presented by Palace Cinemas, than up the road to eat at the famous Italian Forum?

It might sound odd to have two cinemas from the same company located within 600m of each other—but Palace Verona and Chauvel work as a perfect tandem. Both located on Oxford St, these cinemas are less inclined to show the wide-release action blockbusters. They prefer to curate showings of independent, foreign-language films, classic showings, or movies that may otherwise receive less attention. Did we mention that The Chauvel has been operating out of the old Paddington Town Hall ballroom since 1977?

With the sad closure of Circular Quay's Dendy Cinema earlier this year, Newtown's Dendy is the last remaining outpost of the indie theatre franchise left in Sydney. However, with its popularity with the King St locals, we don't see it ever going away. Line up for your ticket and grab yourself a beer, because you'll always feel welcomed at this Newtown theatre. Like most of the great cinemas in this list, Dendy loves nothing more than to show both old and new flicks to its loyal community.

An icon of the 90s, ever since the IMAX Theatre was demolished in 2016 for a rebuild, Sydneysiders have been eagerly awaiting the return of its plus-size screens. Well, with its reopening penciled in for the end of 2020, that time is almost upon us! Maybe you remember visiting the IMAX to watch documentaries for school trips—but once it's reopened, we recommend sitting comfortably and taking in the full might of some visually spectacular blockbusters, which are best seen on the big, BIG screen. 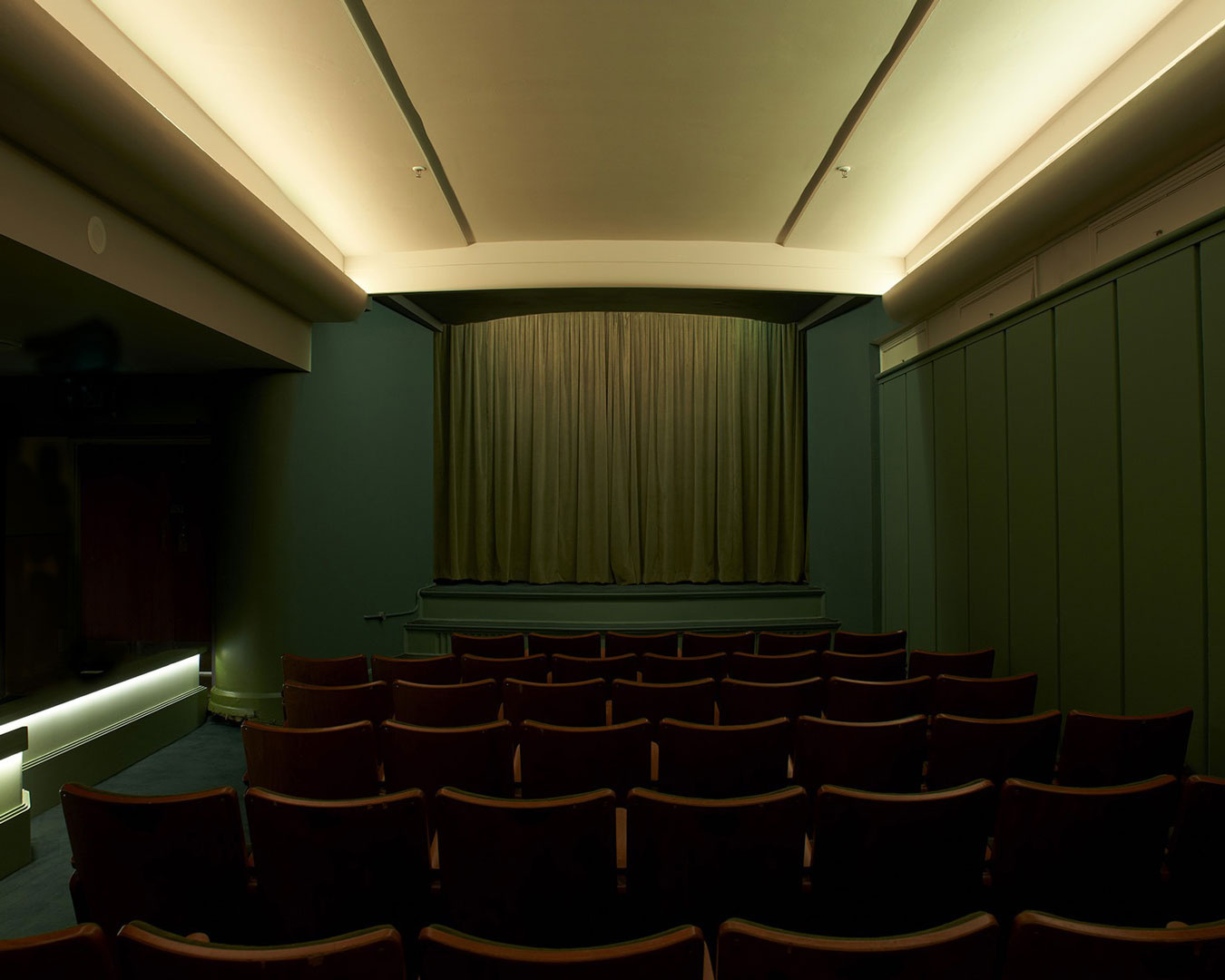 We won't blame you if you haven't stumbled across the Golden Age Cinema, tucked into a subterranean spot beneath the heritage-listed Paramount House building in Surry Hills. Initially built in 1940 and used as the home of Paramount Pictures in Sydney, the underground theatrette is still brimming with its original Art Deco charm. Grab yourself a drink at the delightful, David Lynch-inspired bar beforehand, and settle in for exclusively curated film sessions. So, now that you know where it is, we reckon you should check it out.

You should also suss out Bottle Rocket, a Wes Anderson-themed virtual cocktail and candy bar created to deliver all the vibes of the Golden Age bar to your door.

After a false scare that the CBD's George St cinema could be closing for good earlier this year, Sydney residents were assured their go-to blockbuster-friendly cinema would stay as it was—albeit with a few welcome upgrades—and continue to showcase popcorn flick favourites. After closing during Sydney's initial COVID-19 lockdown, the cinema has reopened with new daybeds, luxury seating, full recliners and a new marketplace candy bar and contactless self-service technology.

We get it, sometimes we all need to forget what's happening in the world, grab an oversized bag of M&Ms and see the latest film in the Fast & Furious franchise—and for that, George St will always be there. 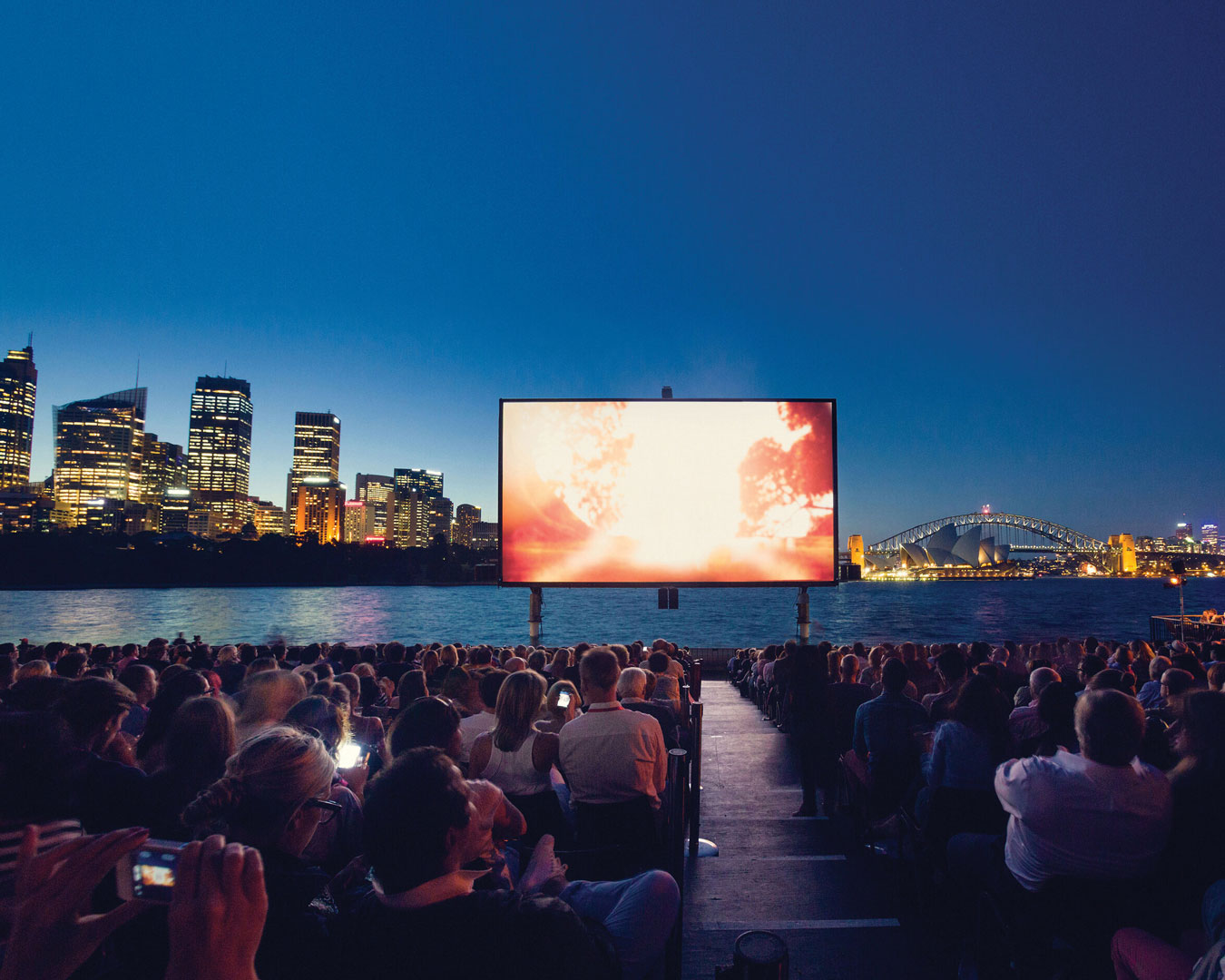 Every January and February, we're treated to one of the most luxurious outdoor cinemas in the world. After all, which cinema can say it's backgrounded by the iconic Sydney Opera House and Harbour Bridge. Now, of course, your attention will be on the movie screen, but we think it's a pretty good distraction during those pre-movie ads, and a great setting for pre-movie drinks and snacks. The Westpac OpenAir Cinema is due to return this summer, so if you haven't already, get yourself down to Mrs Macquaries Point for this one of a kind experience.

Want to know which movies are coming out this year? Here's our up to date schedule of movie releases (and delayed releases, thanks to COVID).