A trip down to Tasmania is an absolute must for anyone looking for a getaway that combines some of the best food, culture and adventure in Australia. And if you’re going to base yourself out of anywhere to see Tasmania’s sights, it has to be Hobart.

To ensure your stay in the Apple Isle is the best it can possibly be, we've rounded up the top hotels in Hobart.

Housed in a 1840s heritage building, The Tasman is the newest luxury hotel in Hobart. Celebrating the city’s unique local character and pioneering past, these sweet digs will open in December 2021. Just steps from the famous Salamanca Markets, St David’s Park and the vibrant waterfront of Sullivan’s Cove, there are 152 unique rooms filled with original artworks from local artists, crackling fireplaces and island baths. Foodies will want to check out The Tasman’s stunning restaurant Peppina led by renowned Tasmanian chef, Massimo Mele who gives Italian inspired cuisine a local Tasmanian twist. 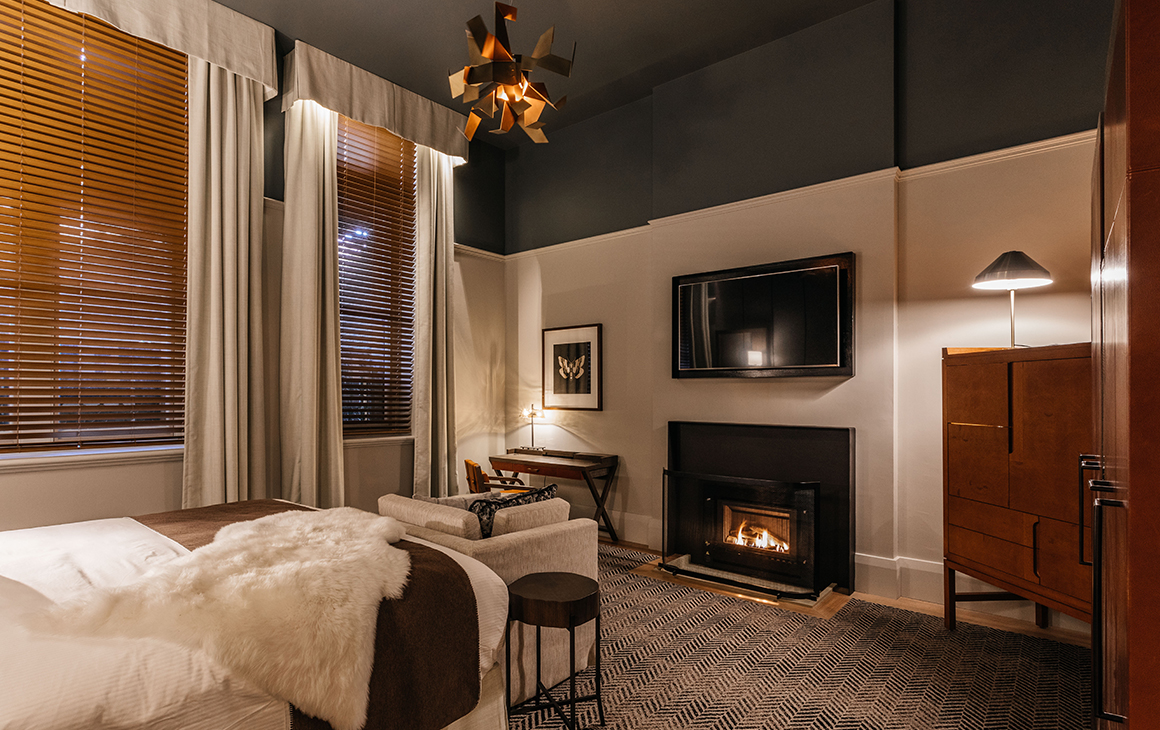 Located on Liverpool Street right in the heart of the city, the Crowne Plaza Hobart has everything you could want or need just steps away. Opening its doors in 2020, this new-build hotel boasts a real sense of place for guests with sweeping views of the harbour and kunanyi/Mount Wellington. For those looking for a spot to relax with a drink in hand then you should make a beeline for The Deck, or if you're after a meal boasting the finest local produce, the Core Restaurant & Bar has your name written all over it. An absolute must-do, though? Popping upstairs to Aura, Hobart's first rooftop lounge bar, to indulge in champagne and oysters.

As the name and three-storey vertical garden in the lobby might suggest, your stay at Moss Hotel on central Salamanca Place will be awash in the colour of calming green. The lush colour palette theme begins with the magnificent wall featuring thousands of native plants and transcends into each corner of the hotel. From the green subway tiled bathrooms to plush velvet seating and green artworks hanging on the wall, your stay here is a true reflection of the spectacular Tasmanian wilderness available at your fingertips. While we don’t like to play favourites, this is absolutely one of the best hotels in Hobart. 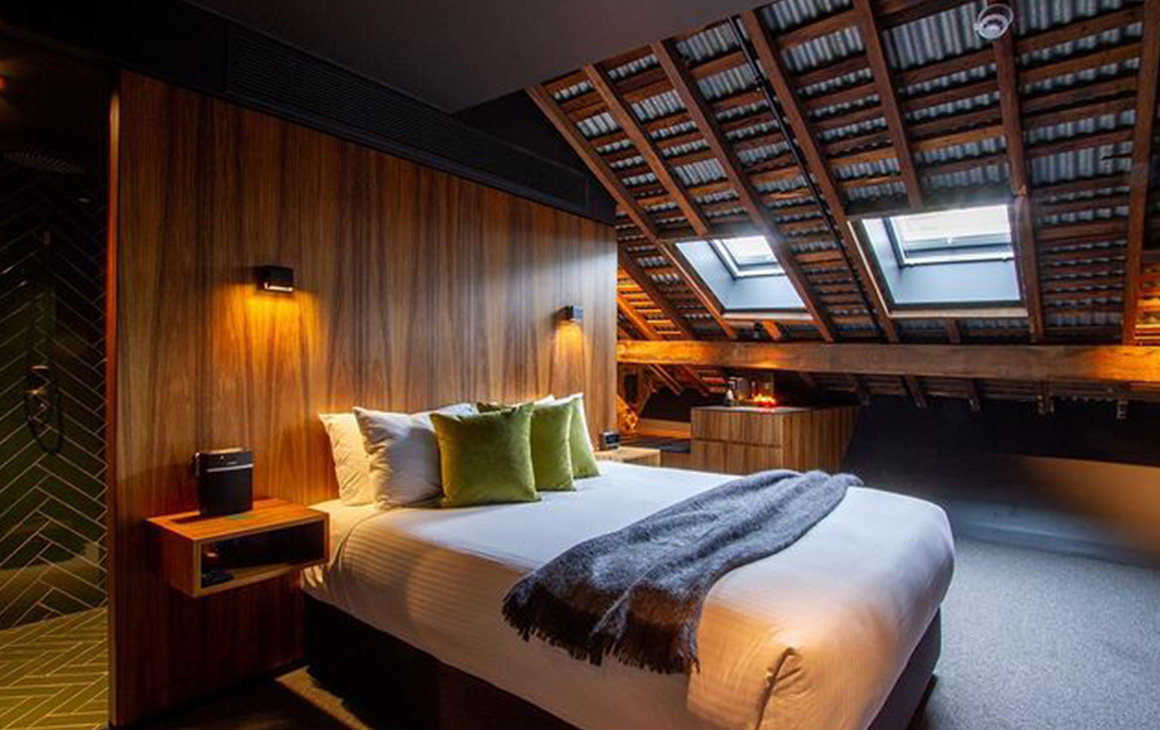 Over in South Hobart you’ll find Islington tucked away on Davey Street. Featuring 11 guestrooms, Islington is situated inside a building dating from 1847—which has been stylishly modernised—and boasts sensational views of kunanyi/Mount Wellington. Along the corridors and in the rooms of Islington you’ll find antiques and a spectacular collection of eye-catching artworks. Even better? They have an amazing restaurant on site celebrating only the best local, seasonal produce. Treat yourself and order the degustation menu from $65 per person.

If you're chasing a unique stay steeped in Tasmanian history, look no further than the Old Woolstore Apartment Hotel. This124-apartment hotel boasts a long history and most notably, the top floor of the building was used to treat wool. The original floors have been maintained and, rather than destroy original equipment used at the old wool store, much of the original equipment has been incorporated into the design as features in the corridors and common areas of the hotel. As for the location, you'll be perfectly positioned between the city centre and Hobart's docks.

One of the most recent hotels to hit Hobart's skyline is the Vibe Hotel Hobart. A sleek, cool and sophisticated contemporary design sweeps through the hotel with touches of inspiration taken from the sea and sandstone cliffs on nearby Bruny Island. One of fave parts? All bedroom furniture has been sourced from local Tasmanian oak and lovingly made by local craftsman giving it that extra special touch. The only problem you'll have is trying to pull yourself away from the uber-plush Dreamcatcher beds. If you're looking for one of the best hotels in Hobart, you've found it. 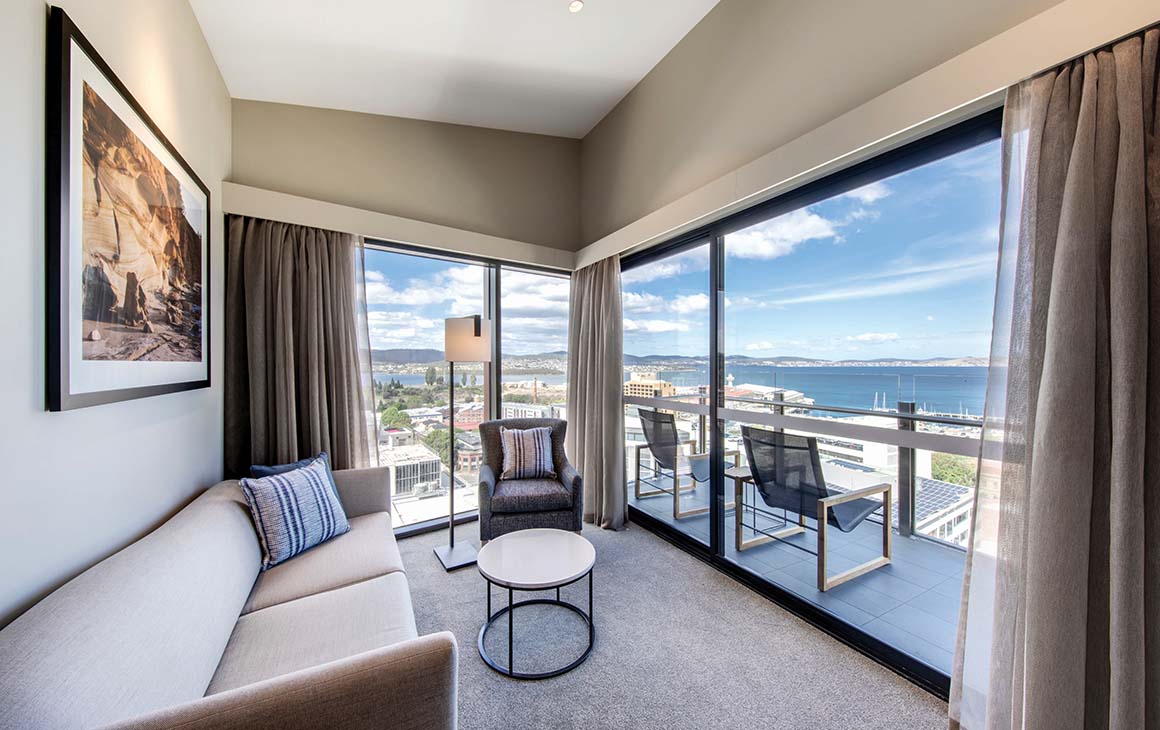 The Henry Jones has been a mainstay in the Hobart hotel scene and has recently had a major revamp of its 52 rooms and four suites. Set inside 19th-century IXL jam factory, The Henry Jones boasts a true sense of history and its industrial past remains strong with features of the jam factory worked into the building's design. Plus, you're in prime position as you're just a quick walk across Hobart’s docks to Salamanca Place and the Hobart CBD. It’s called The Henry Jones Art Hotel for a reason, with more than 500 works of local art adorning the walls of the hotel, and it’s all available for purchase—just ask downstairs.

Another premium hotel from the team behind The Henry Jones, MACq 01 is well positioned and well storied. Each room is named after a Tasmanian character (from heroes, villains and explorers to inventors and convicts), including seven living Tasmanians, and are rich in tales you can discover on the hotel's 114 Doors tour. MACq 01 is just across Hunter Street from The Henry Jones so has the same great access to Hobart—very important when it comes to eating and drinking your way around the city. Our tip? Opt for the superior waterfront room with epic views and lush furnishings. 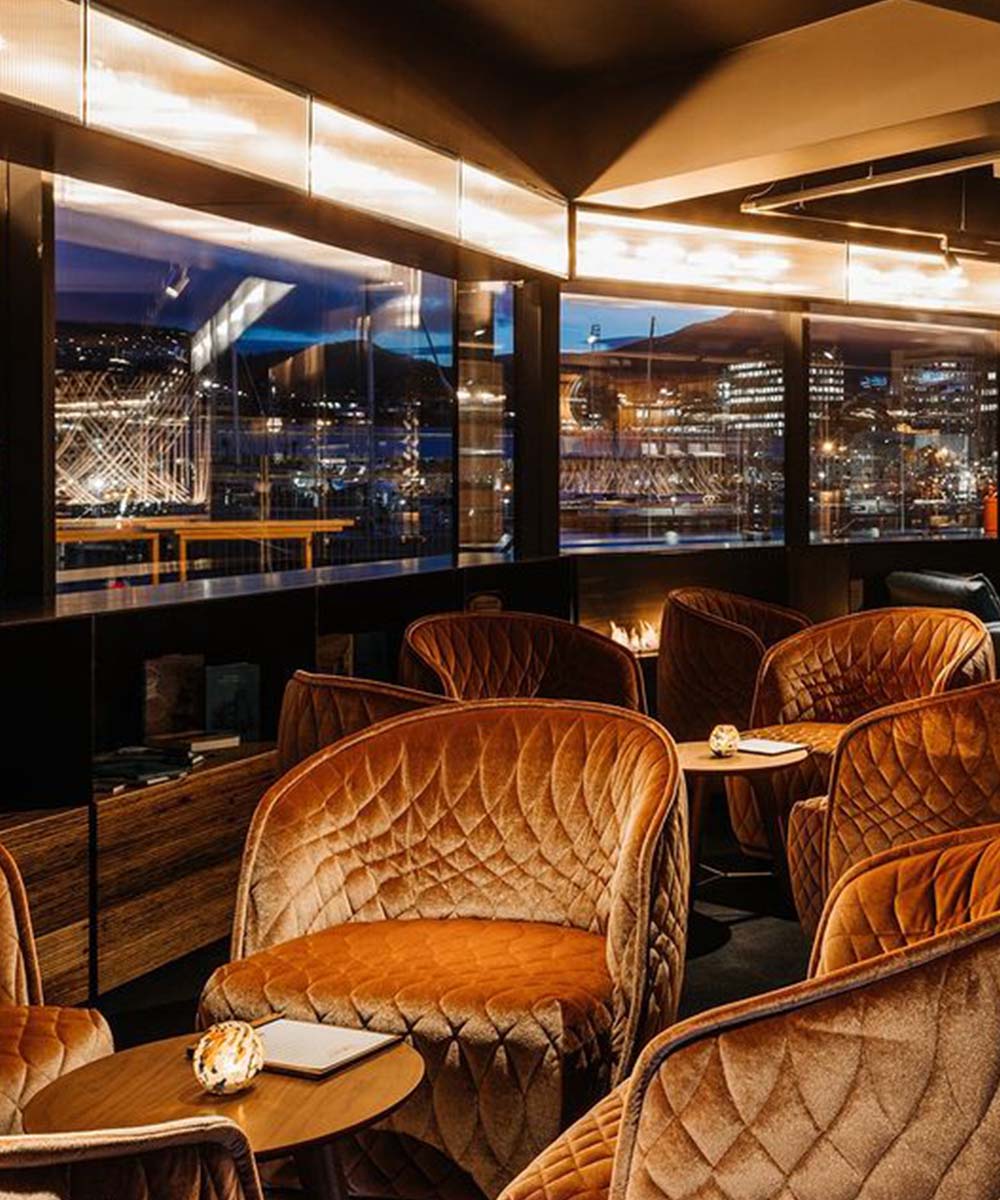 Somerset On The Pier

As the name suggests, Somerset on the Pier occupies a special slice of prime harbour real estate, close to Salamanca Place and the CBD. Housed in 1930's pier building, its one and two-bedroom loft-style serviced apartments are perfect for groups and families, with plenty of space to relax at the end of a day exploring the city and further afield in the Derwent and Huon Valleys.

If you’re looking for a hotel with great views overlooking the docks and with the CBD right at its back, the Hotel Grand Chancellor Hobart is the place for you. The Grand Chancellor has everything you’d expect from a city hotel, with a fitness centre, heated indoor pool, meeting rooms and convention centre, as well as a bar and restaurant. The plush rooms feature Tasmanian timbers and polished granite.

A stay at Lenna involves time travelling to 1874 when this gorgeous sandstone mansion was built. Listed by the National Trust and carefully restored, its 52 rooms have a range of stunning views—mountain, harbour or parkland—and it’s close to even more juicy history at Salamanca Place and Battery Point. At night, curl up in the Chandelier Lounge Bar and sip on smooth Tassie whiskey—sure to warm your cockles on even the coldest winter night. 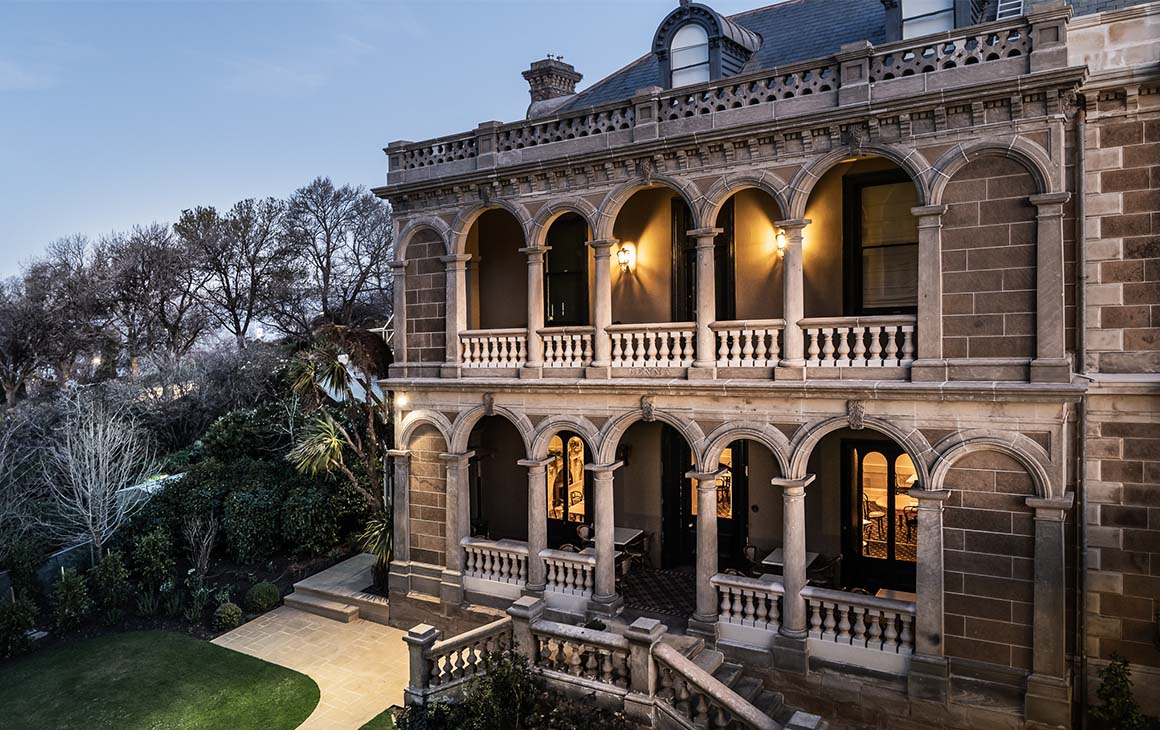 Clydesdale Manor is a beautiful Georgian-style building that was built way back in the 1880s. With the docks, Battery Point, Salamanca Place and the CBD all within 2km of the manor it's very well situated in Sandy Bay. There are seven guest suites at Clydesdale Manor which all feature high ceilings and antique furniture. You’ll also find an open fire in the guest lounge with complimentary fudge and port every evening.

Sitting on Castray Esplanade, near to Salamanca Place, Salamanca Wharf Hotel has great views across the waterfront to the CBD. Built in 2012, the hotel has room options ranging from studio suites to premium apartments and loft penthouses with five-metre high windows for the best views of all. All rooms feature fully equipped kitchens, and the mini bar is stocked with all the best local beers you require.

Hadley’s Orient Hotel is one of the oldest hotels in Australia, having been built by convict labour way back in 1834—that fact alone is enough to book a stay here. The National Trust listed venue has 71 rooms (think gorgeous vintage wallpaper and period furnishings) and is right on the edge of Hobart’s CBD with easy access to the docks and Salamanca Place. Hot tip: be sure to carve out some time at the beautiful Atrium for afternoon tea.

Customs House Waterfront Hotel is a handsome 1846 sandstone hotel that occupies a prime position, a few steps from Hobart’s harbourfront, Parliament House and historic Salamanca Place. Meet the locals in the friendly front bar and watch dockside action from the outdoor dining area.

Looking for Hobart's best eats? This list can help you out.