After being unceremoniously cancelled in 2020 and following a year that might have left us all wondering if fashion week was still relevant, Afterpay Australian Fashion Week felt a whole lot more electric this time around—and there are a few reasons why.

The annual style blowout descended upon Carriageworks in Sydney this week with a more packed out schedule and more designers on show—some totally new, some icons of the Australian fashion scene. Shows embraced a vision of style that took us from the shoppable to the aspirational, and the purely imaginative and totally moving.

There were a few firsts, frontier moves, and welcome switch-ups in the mix—Indigenous models, trans models, and plus-size models all featured on the runways. With Afterpay as its new sponsor, there were techy concepts on show too, like digital couture. A silvery trench coat designed by Toni Maticevski that could be “tried on” on-site at Carriageworks and is now destined to become a bespoke digital shareable asset.

Most stirring, however—and one of our favourite shows across the whole week—was a first-ever spotlight on First Nations fashion design. In a move that could have read tokenistic from Fashion Week’s organisers IMG, the group chose to partner with national Aboriginal and Torres Strait Islander organisation First Nations Fashion + Design (FNFD). 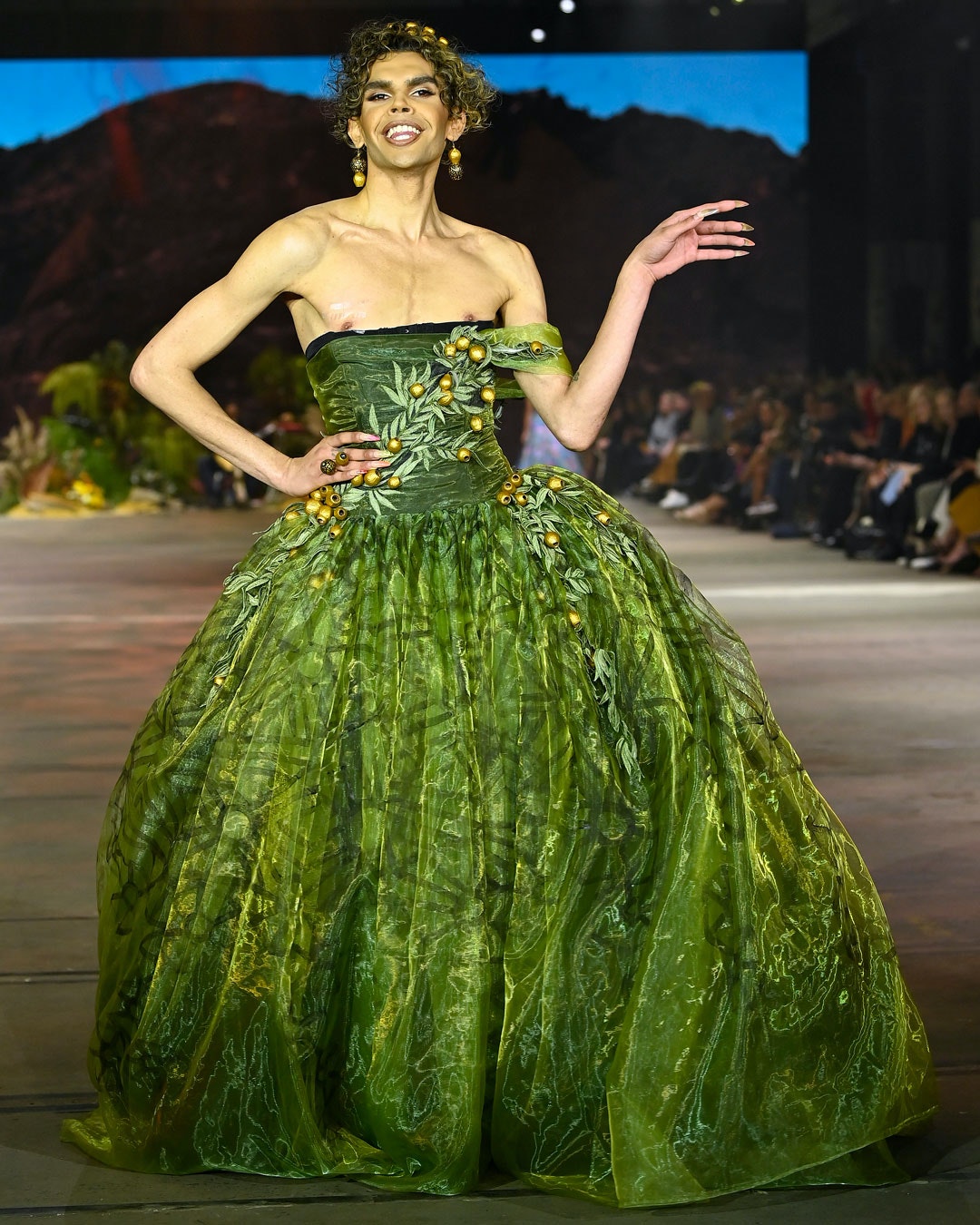 Models on the runway were all Indigenous, as were the back-of-house team and production crew. The show was accompanied by dance and movement pieces from Luke Curry-Richardson and Cleopatra Pryce, as well as epic live performances from William Barton, DRMNGNOW, and Electric Fields—whose beautiful rendition of From Little Things, Big Thing Grow in both Pitjantjatjara, Yankunytjatjara, and English set the tone for the show—a song about a struggle for equality and land rights and recognition.

Held on the eve of Mabo Day against a stunning backdrop of native greenery, Felicia Foxx stole the show in a eucalyptus green ball gown; AARLI presented streetwear slashed in the important slogan "Deadly"; Grace Lillian Lee's woven armour was nothing short of powerful, and Claire Helen's stunning silks in earthy tones are all we want to wear this summer. 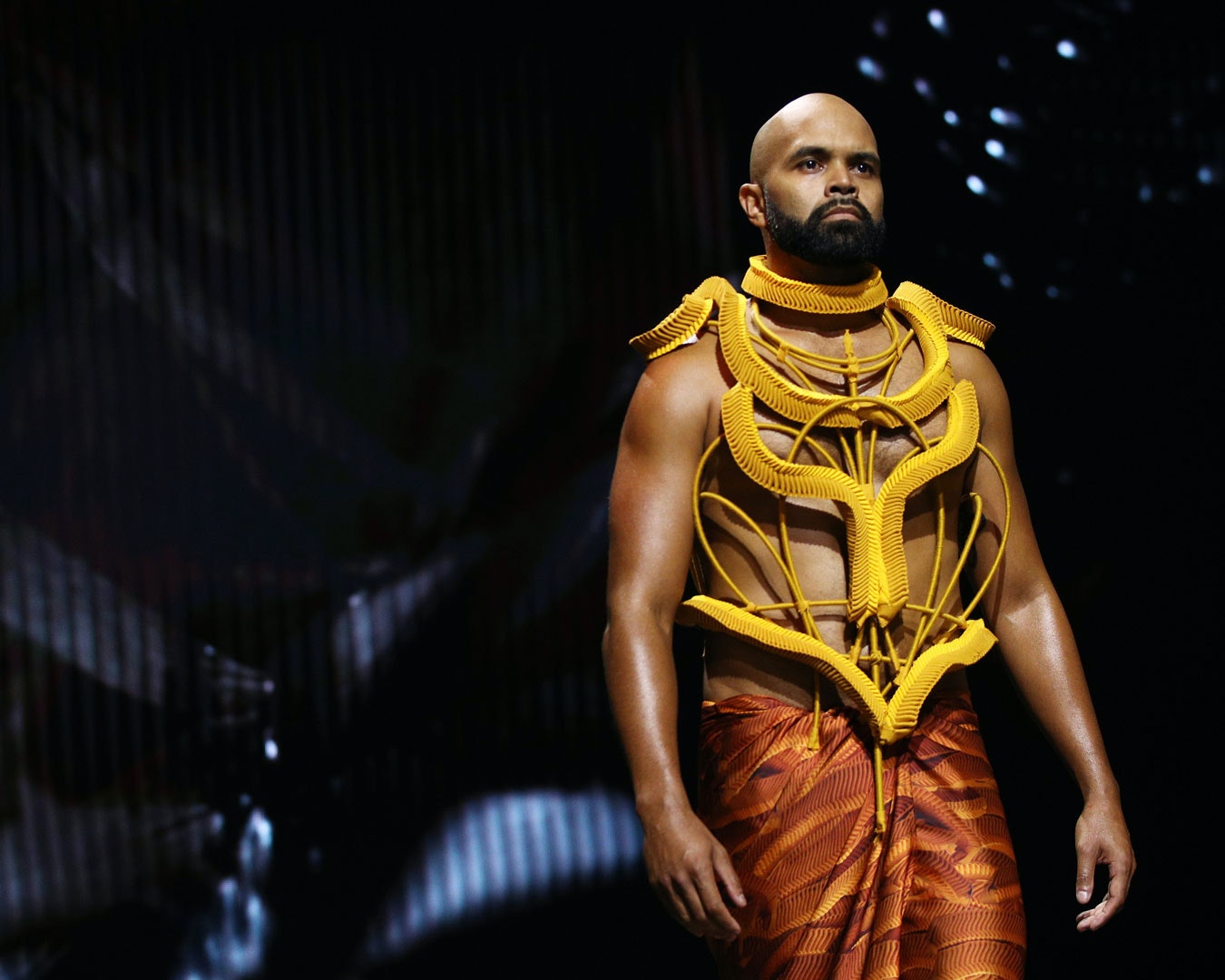 AARLI designer Teagan Cowlishaw told us her collection was inspired by the "future of First Nations fashion."

"We are the next generation of deadly warriors. A legacy that we must continue for our families and community. United, we stand as urban warriors. We are loud, proud, and deadly!"

"I am so proud to be standing beside my sista Grace Lillian Lee to bring AAFW a show that has never been seen before," Cowlishaw continued.

"I am so honoured to be invited to showcase as a First Nations designer and to be given this opportunity to showcase my work on this major platform. I am so honoured to walk with some incredible independent brands. These platforms are what is going to inspire our communities and the next generation to have self-determination and dream for the stars."

At the end of the show models stopped, held out their hands, and let sand sift to the ground. Then, in a rare move for buttoned up front row lined with fashion editors and dressed-up influencers, the crowd gave a standing ovation, which rolled into ceremonial-like clapping, led by Electric Fields singer Zaachariaha Fielding.

This was, without a doubt, the highlight of the week. Emotional, rich, and a reminder of what Fashion Week can be to us too: a hopeful vision for the future.

Keen to see the stunning Indigenous-designed collections for yourself? The history-making fashion will be presented at a new exhibition titled Eucaluptusdom at Sydney's Powerhouse Museum in July.

Now, read this piece on why the responsibility of reconciliation does not sit with First Nations people, penned by Yorta Yorta writer Taneshia Atkinson.